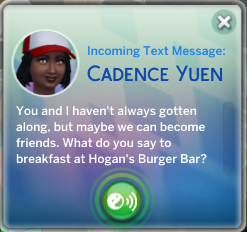 Well hello stranger that apparently I hate… no I’d rather not go to breakfast at my own restaurant with you. 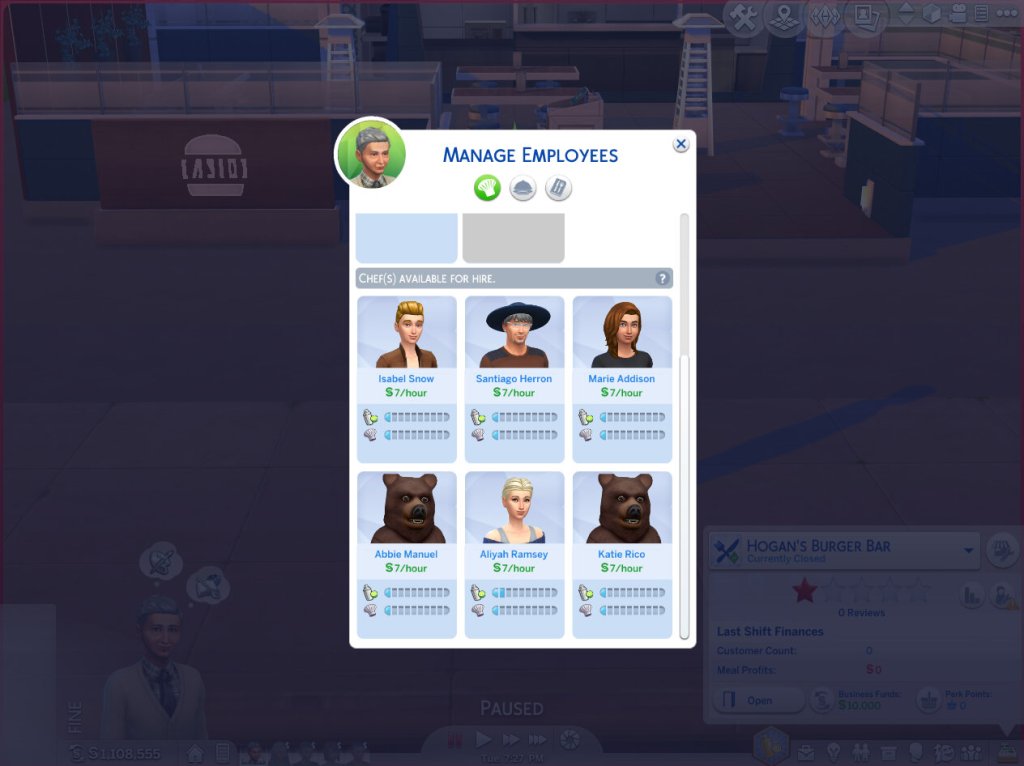 And so it begins.  Kristof’s adventure in restaurant ownership.  He’s going to start his way at the bottom and work his way to the top!  Strangely enough 2 bears applied for the job.

He started off with Hogan’s Burger Bar.

He was very excited to greet his first customers.  Unfortunately I get all of the townies confused so I’m not sure who 90% of them are.

Her face here was just so adorable I had to take a picture.  This is the first waitress Anissa.

Just a random Holt house picture thrown in.  I thought it was funny that there were all these plates and Jasper had to sit in one of the chairs to the side to eat.  I have no idea what I had done the last day I played them but apparently it involved a lot of food. 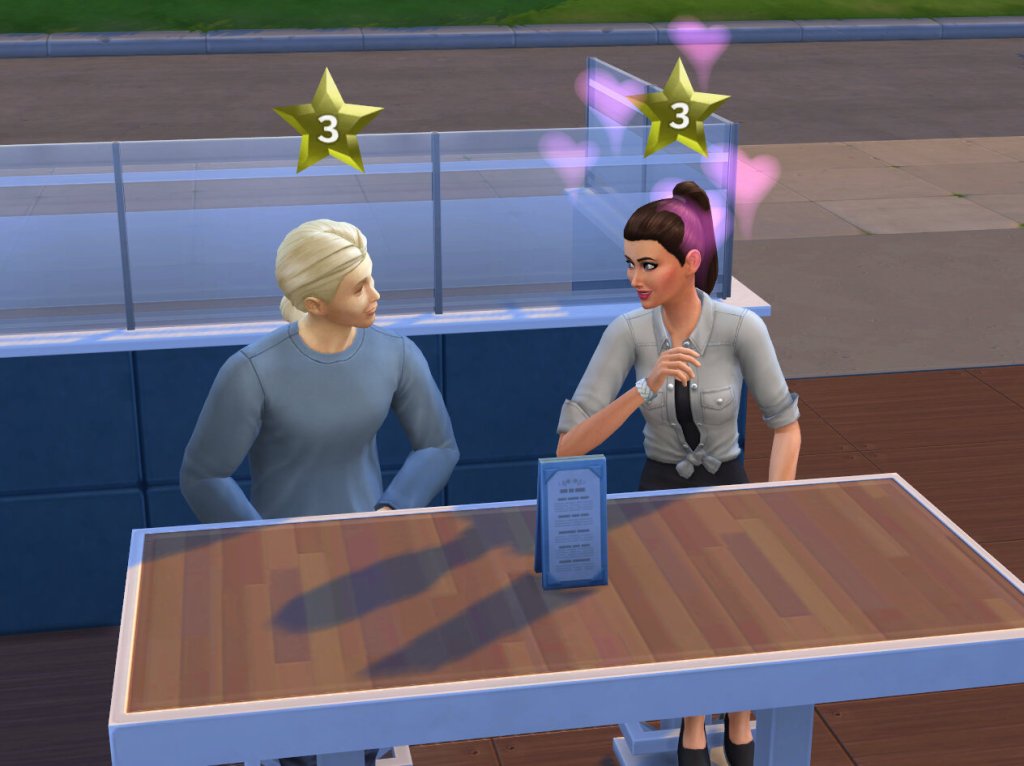 One of the coolest parts of owning the restaurant is watching sims I know interact.  This is Gabe’s dad and step-mom.  They flirted through the whole meal. 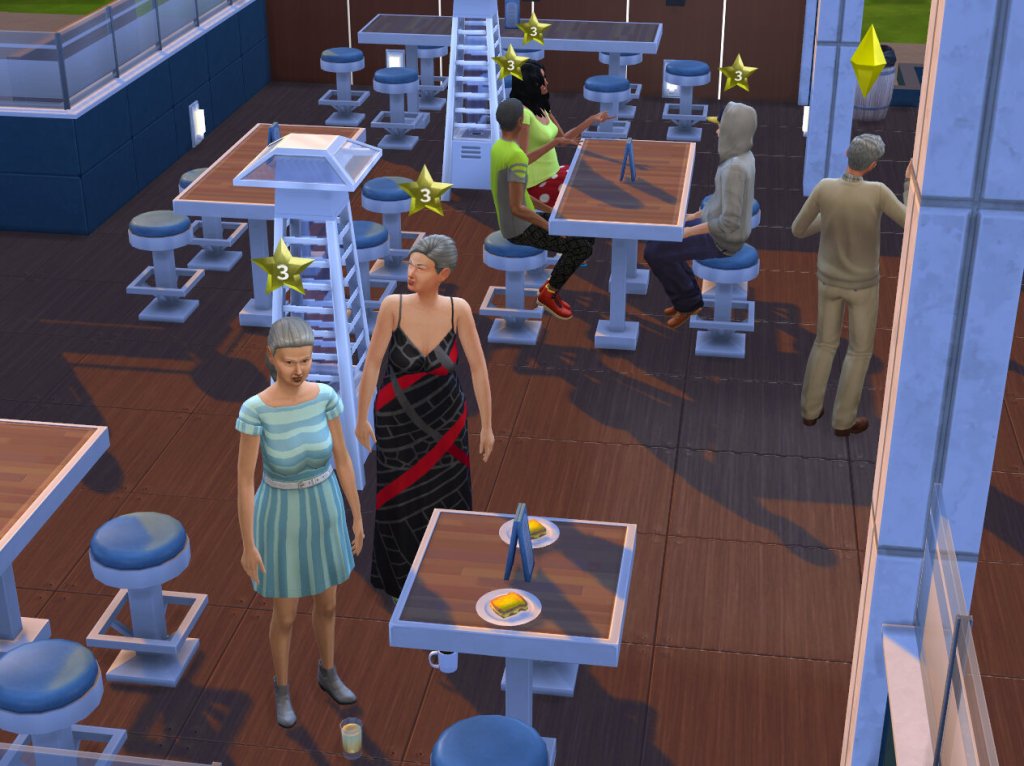 This doesn’t happen often but it’s pretty annoying.  The two elderly women (the woman in the blue dress is Bryce’s wife) stood up from their meals with their drinks, put the drinks on the ground and stood there for like a sim hour.  Eventually they left- never touching their food.

Tate’s flirty, Kristof’s hungry and that random townie in the purple sweater has stood up with her food and drink and thus can’t eat the food.  She stands there until she finally finishes the drink and puts it down then eats.

Amira shows up to join Vaughn.  I’ve noticed that some parties don’t show up at the same time.  Vaughn appeared to arrive with Tate but Amira joined Vaughn and Tate’s wife joined him.

One really good thing about seeing all these townies is being able to blacklist their clothing items in Mc Command Center while they’re there.  Like the horrid yellow belly shirt.

Haha this lady went into labor!  Unfortunately she didn’t leave.  She got her meal, stood up with her darned drink in one hand and plate in the other then started doing the peepee dance.  Eventually she put the food and drink down, peed herself and left.

No they’re not gasping at the woman in labor.  At least once a day everyone stops what they’re doing to gasp at something random, usually the waitress, I’ll look expecting to see something interesting and nothing out of the ordinary will be happening. 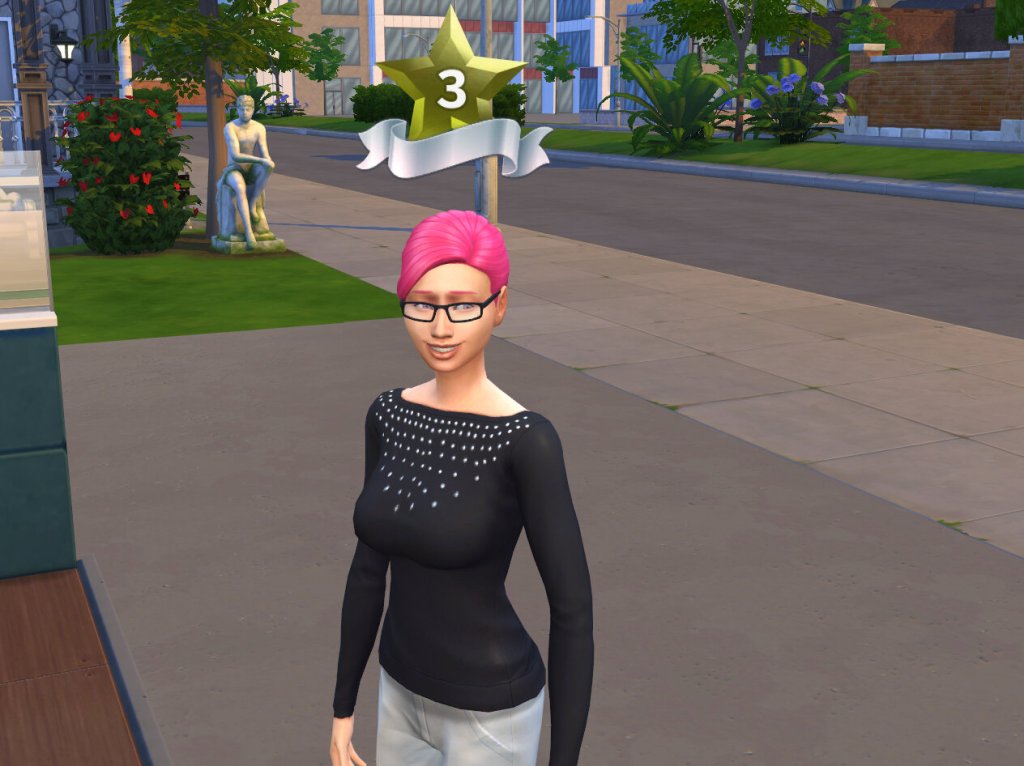 The stylishly pink-haired food critic gave the restaurant 4 stars.  She never even ate her meal.  She stood on the other side of the restaurant holding her drink talking to someone at another table then paid her check and left. 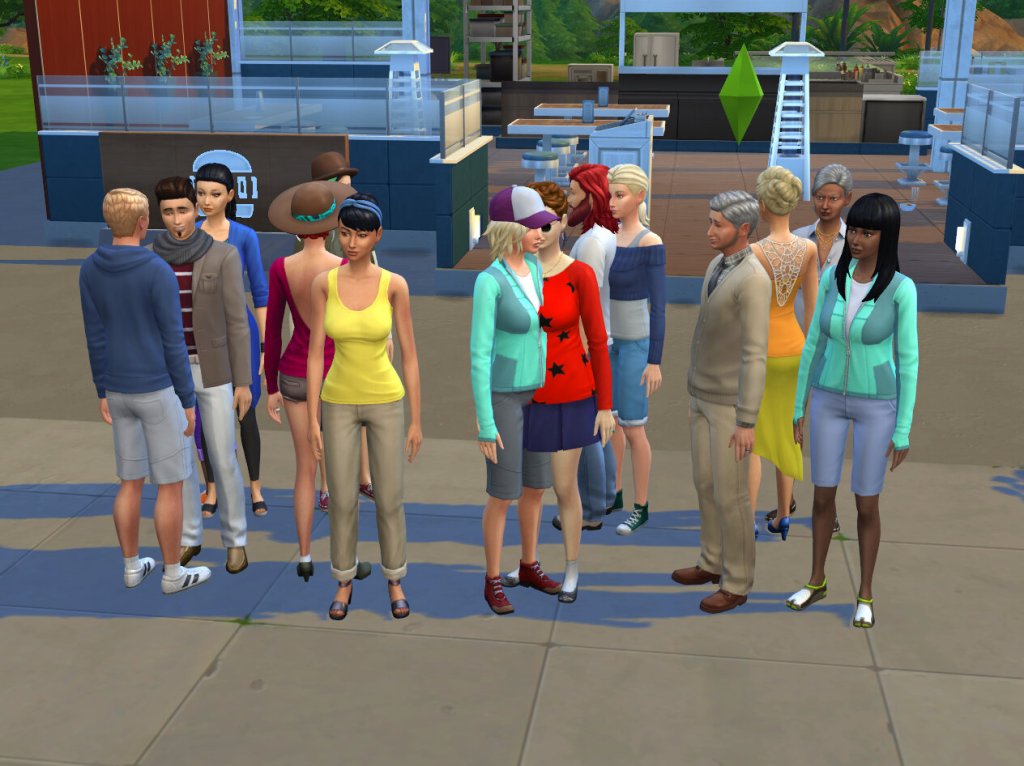 This is what I saw when Kristof landed one day.  After I unpaused the game everyone dispersed, it was really weird.  (Btw the girl in the yellow tanktop is Johnny’s wife.)

Kristof upgrades restaurants to the Sunny Side Up Diner.  This customer that he’s talking to didn’t seem to have a table, he just roamed around the whole time.  Later he went and sat outside reading a book. 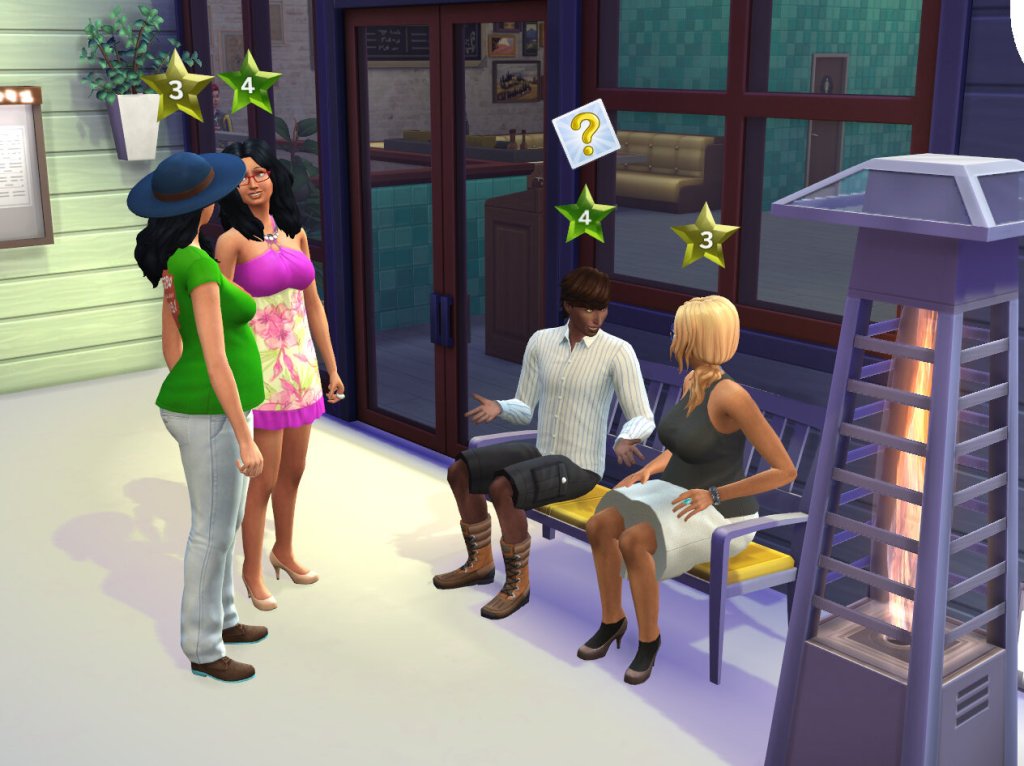 Oh there he is outside still!  The lady that went into labor is sitting with him.  No clue who the others are.  I think I took the screenie because they all congregated outside instead of sitting at tables.

I really wish that everyone wouldn’t show up all at once when the restaurant opens.  (Also lookie it’s Amira’s detective friend.) 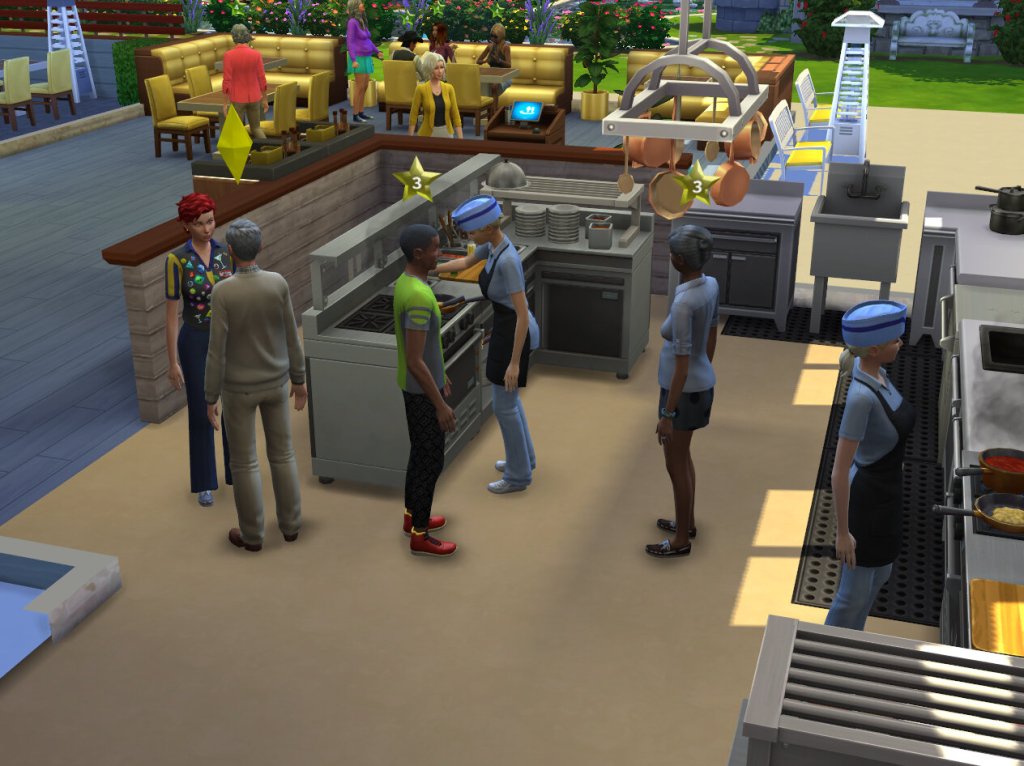 There’s no door so I have no way of stopping the customers from roaming around in the kitchen.  Weren’t they supposed to stay in their seats?  Hopefully the new restaurant has a lockable door.

Please note this was just for fun and my entertainment.  It’s not part of Heart & Soul but by the end Kristof will have opened the restaurant that will be featured in Heart & Soul.  I didn’t bother with headline effects or putting walls up or any of that ‘cuz this was just me goofing around.

5 thoughts on “TS4- Dining Out with Kristof!”