I haven’t had a chance to play this challenge in a few days so I was excited to get back to it today.  Unfortunately, they opened the restaurant and the cook never showed up so they had to close.  They gardened and painted for a few hours then I decided to try opening again and she showed up.

Another person that showed up was the restaurant reviewer.  Awe man.

She really annoyed me.  She didn’t sit down so the waiter couldn’t take her order.  She stood around like this making notes and talking to customers forever until finally sitting and ordering.  I wanted to close but wanted her review so I had to stay open.

That night Brody decides to try a flirt with the cook and she wasn’t having any of it.

He’d already asked her to hang out before she turned him down so they end up stargazing until he got too tired and went to bed then finally she left.

The next morning after they open I caught Tanya autonomously flirting with the waiter!

The restaurant gets packed and darned if the reviewer doesn’t show up again.  I ended up having to add 2 more tables to accommodate her and some other sims that were waiting.  At least this time she sat and ate.  I believe this is also the day that I changed the menu to items with 2 & 3 difficulty. 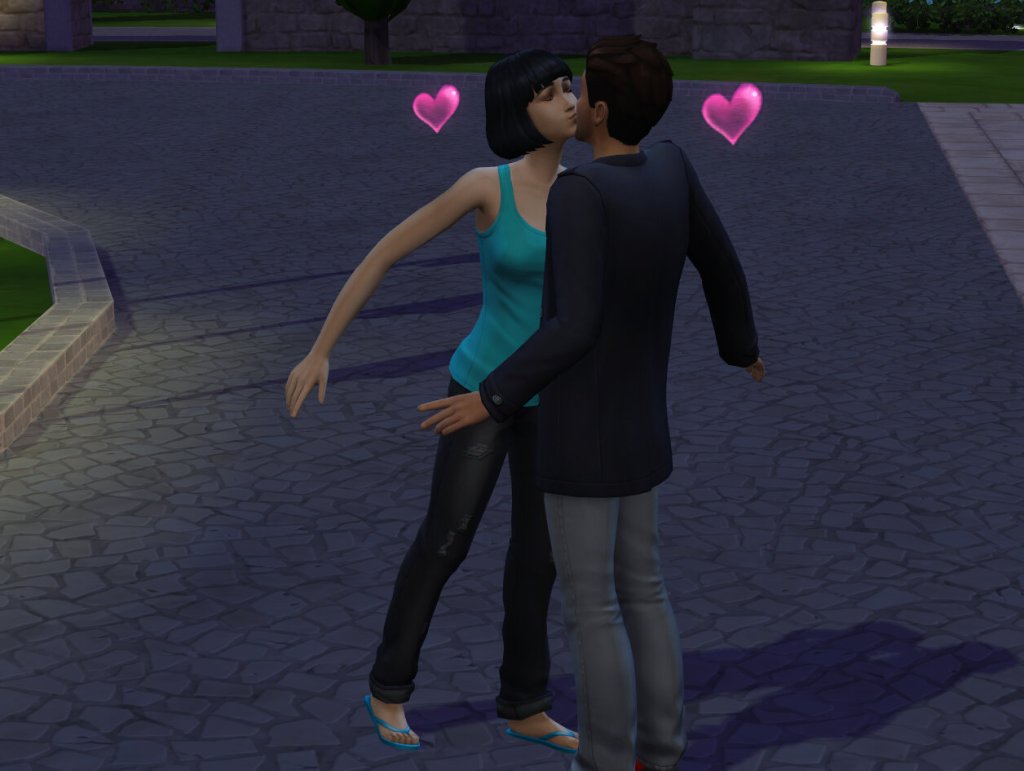 Tanya gets a call from the waiter to go to the Von Haunte Estate.  They flirt for a bit and she gives him a kiss. 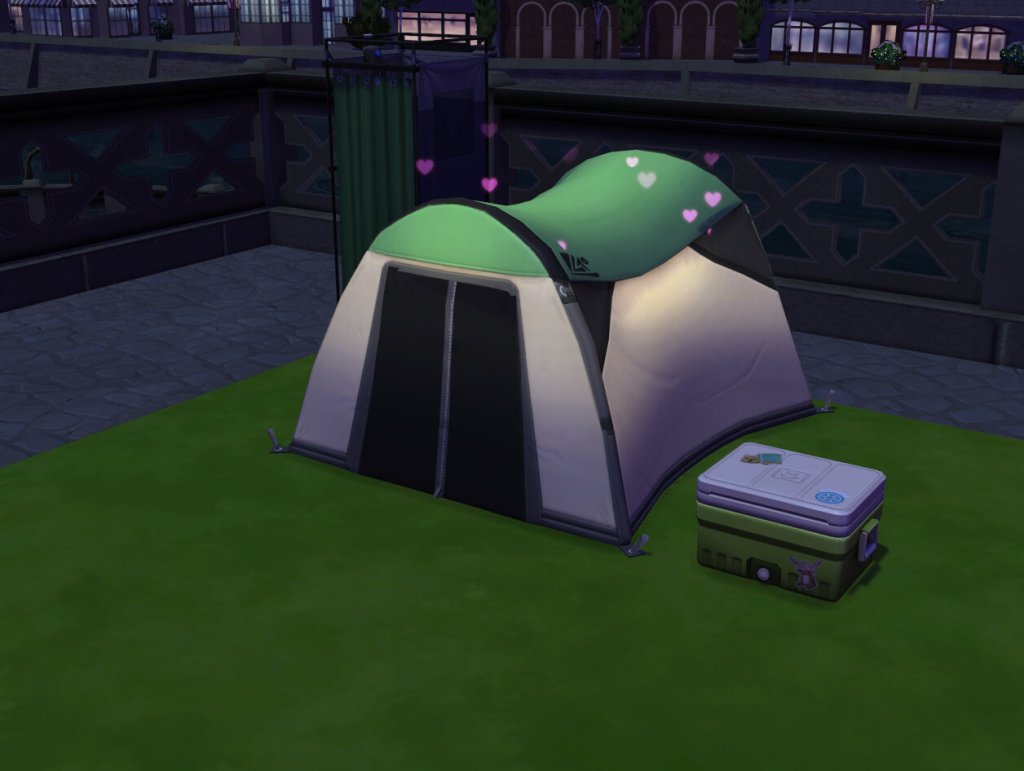 Then they head back to the restaurant lot to have a bit of fun in the tent.

The cowplant is a big distraction.  Customers flock to it and Tonya and Brody never get a chance to welcome them. I wasn’t very upset when it died.  I left the skeleton there though.

The waiter throws up in the toilet 3 times that day.  Gross.

Tonya was cleaning the nasty toilet and I guess he really had to go so he peed himself.  Ugh. 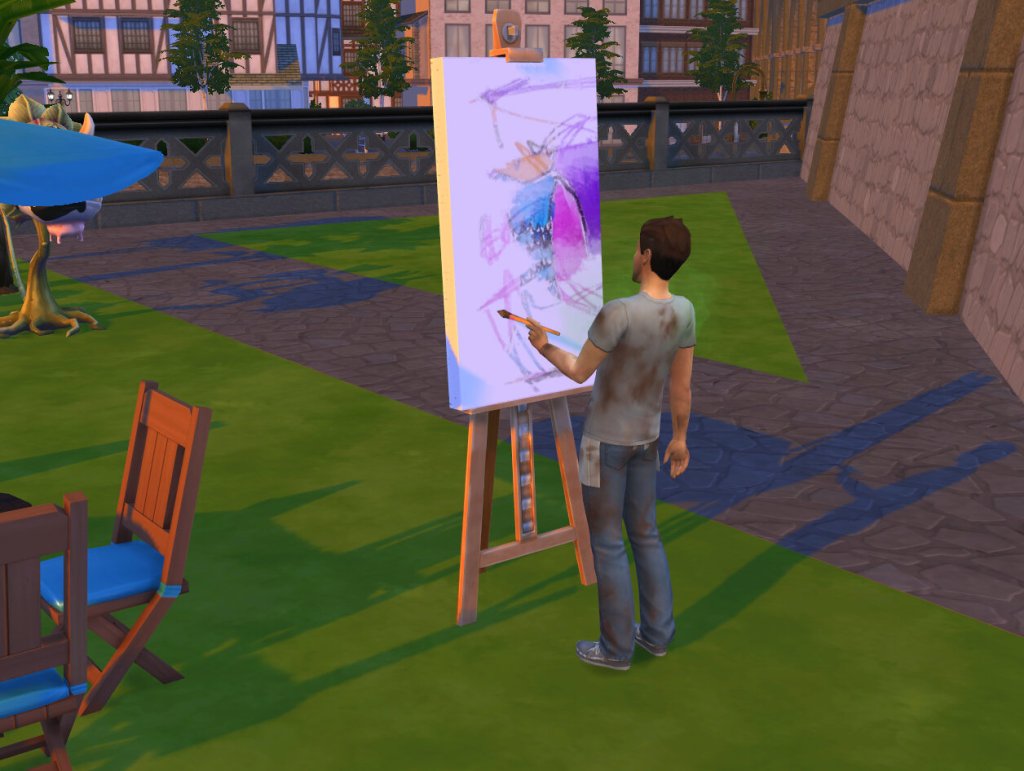 Then he starts painting.  This time, I let him finish it because I couldn’t think of how to make him stop.  The next time he does it I went into build mode and sold the painting.  After that, I made sure there was always a painting started on the easel when they were open. 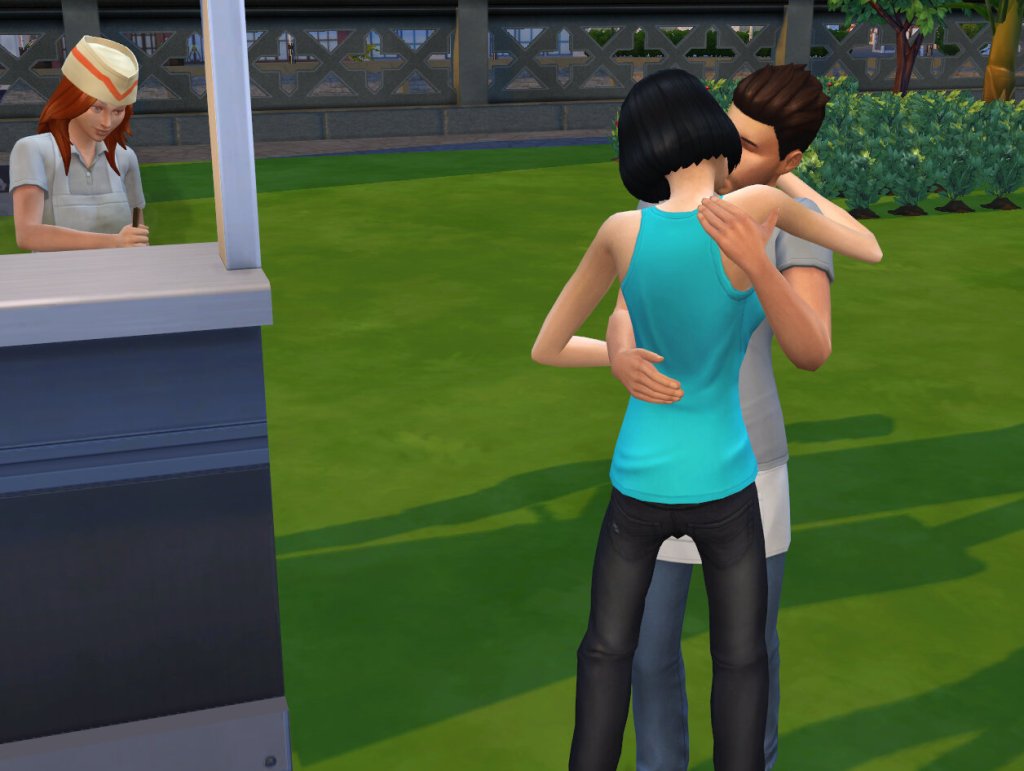 This became a problem.  It was cute at first but the dude needs to work!  I end up having to keep Tonya constantly occupied or they’re making out all the time!

We started to get 5 stars from the customers… then the reviewer came, sat and ordered, stood around and talked and never ate her food then left.

The following were meant to be mixed in with the screenshots but I didn’t write down which pictures were for which days and didn’t know where to place them.  I’ll do that for the next chapter… 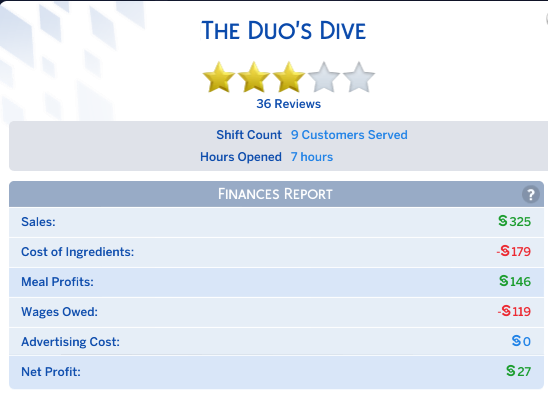 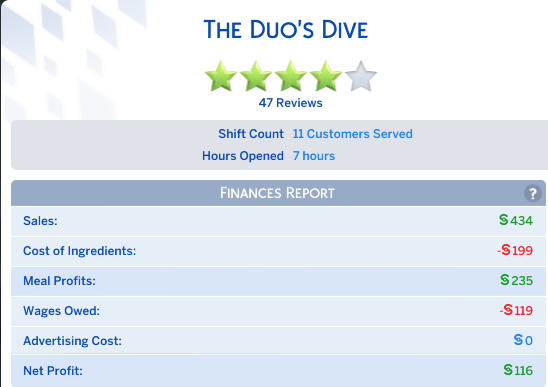 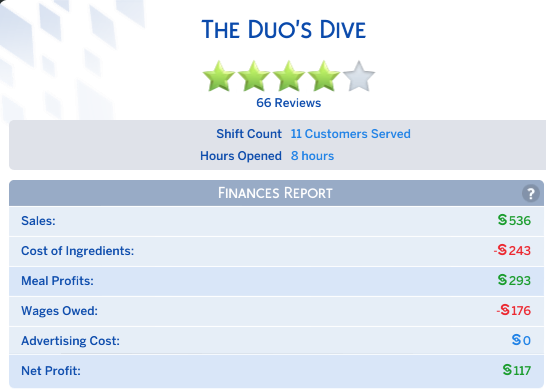 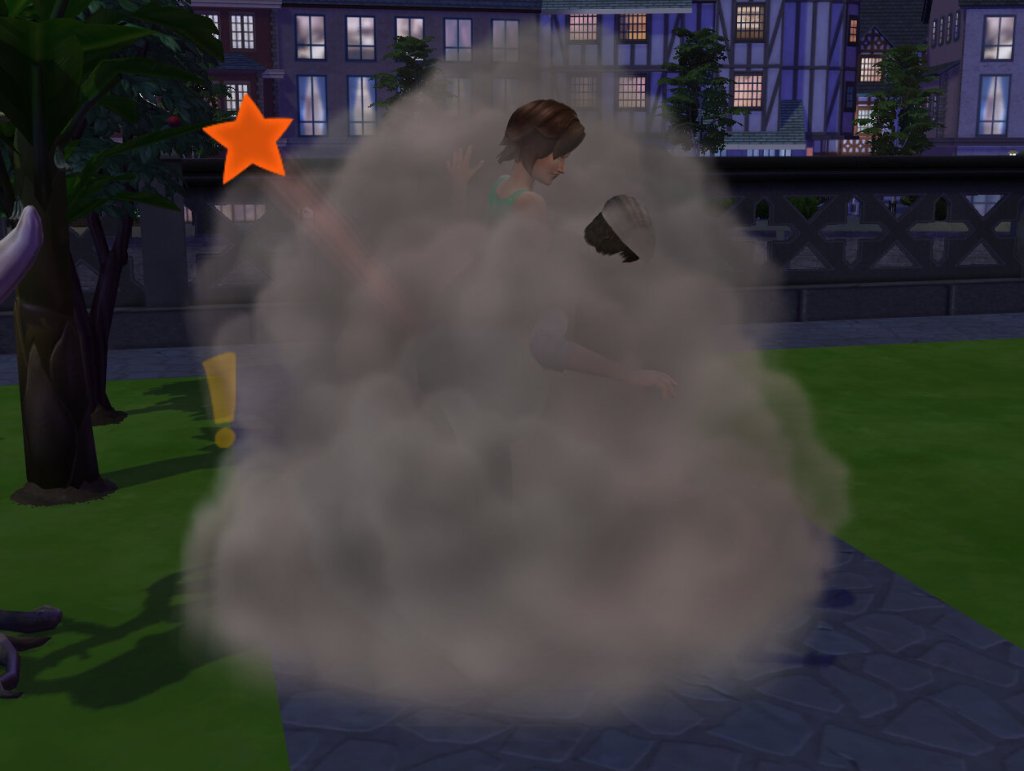 This was really weird.  They had just closed the restaurant.  Everyone left.  Brody just finished watering the garden and was standing there on the sidewalk when this woman literally ran up to him and started fighting him!!!  I’ve never seen her before.  She came out of nowhere.  He won the fight by the way.

This isn’t the full 7 days that I had planned on making these posts, it’s only 6.  Because for some reason, shortly after the fight, I had gone into build mode and bought a penguin tv because Brody’s fun is always so low and when I exited build mode they were frozen.  Nothing I did fixed it.  So I exited.  Luckily I had saved 10 minutes before that so I don’t think I missed much.

The cook was very unsatisfied and quit on the second day.  I hadn’t been paying attention to their satisfaction and luckily had recently saved so I exited and started over.  She got a pay increase and praised as often as it would let me but it took 2 days to make her unsatisfied and another few to make her satisfied again.  I wonder if it has anything to do with Brody flirting with her?