So remember at the end of the last chapter that Mindy and Andrew woohoo’d in the tent before they got married? Well, I have risky woohoo at 5%.  It’s only happened to me twice before but out of habit, I always check to see if they’re pregnant after woohoo.  She was.  Ohmygoodness!  The pressure is real here people!  I have to build this house and complete her aspiration before he ages to young adult! 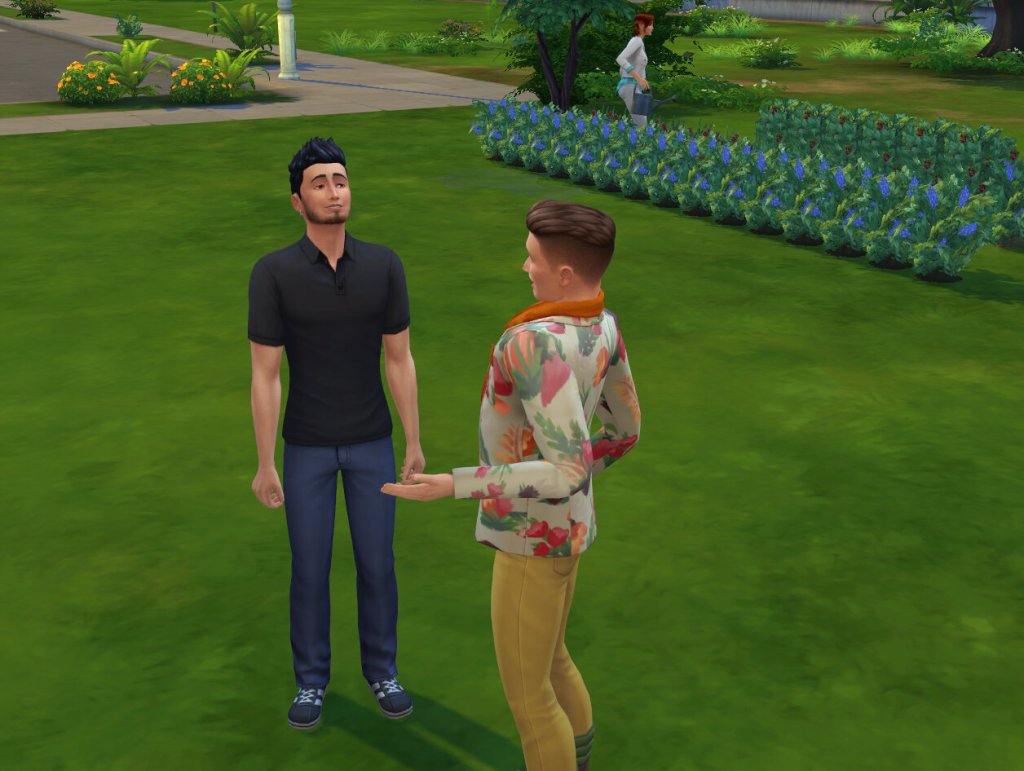 I believe I took this picture before I found out about the baby.  Andrew gets to know Mindy’s best friend Casey Williams while Mindy gardens. 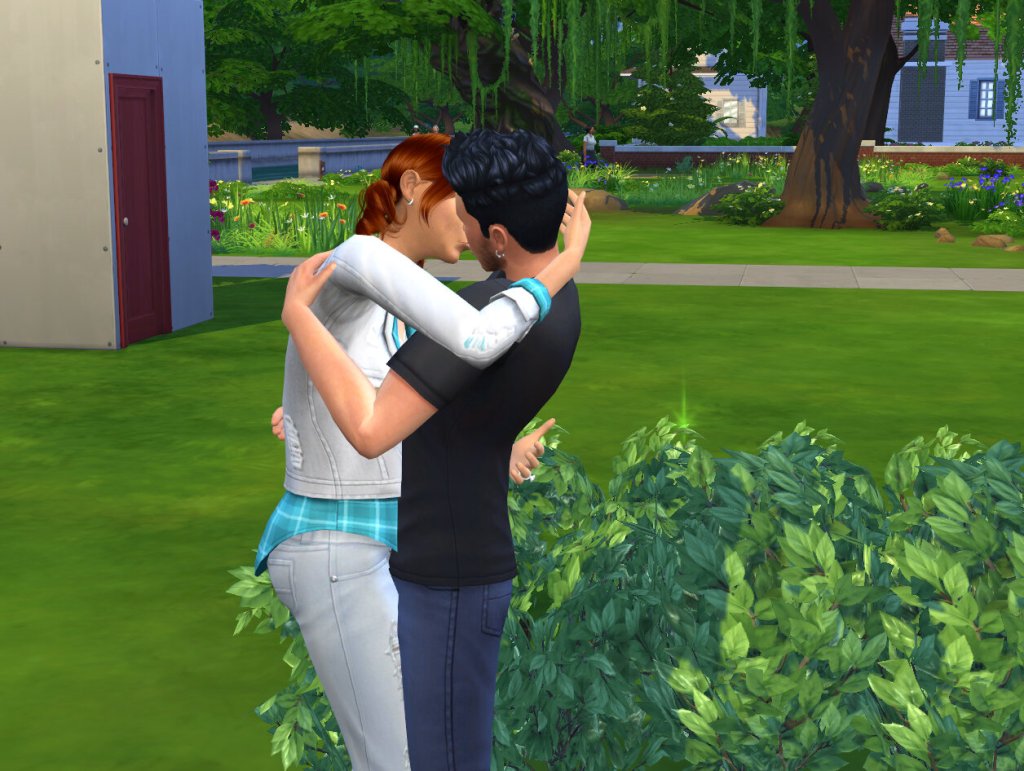 These two are going to be just as bad as Brock and Emerson were, I can tell.

The downstairs to the house is outlined.  Yep, I’m going to attempt a two-story house!  You know, I’ve always hated building.  The only house of mine I’ve ever liked before the 001 house was my Awesimsauce house in Sims 2.  So it’s kind of a surprise to me how excited I am about this one. 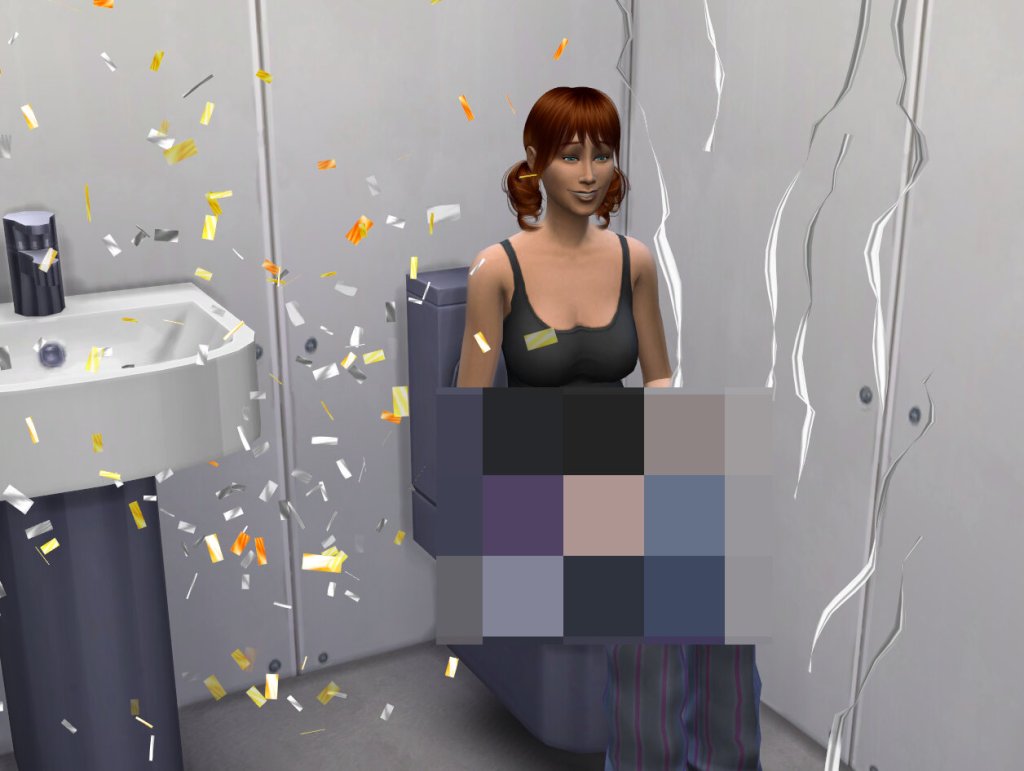 I finally gave in and had her take the pregnancy test.  She would have discovered it on her own soon anyway.

Andrew had been taking a shower.  He got out of the shower, dressed, heard the big news then undressed and got back in.  Silly sims.

I just happened to look outside and see Brock hugging Keith near the house.  I ended up having to go into manage worlds and change his hair and beard to grey when he aged up because they’re both CC.  Keith aged to teen the next day.

I had enough for a cheap stove, but I didn’t want to buy a cheap one and then sell it to buy a better one so it was salads for a bit. 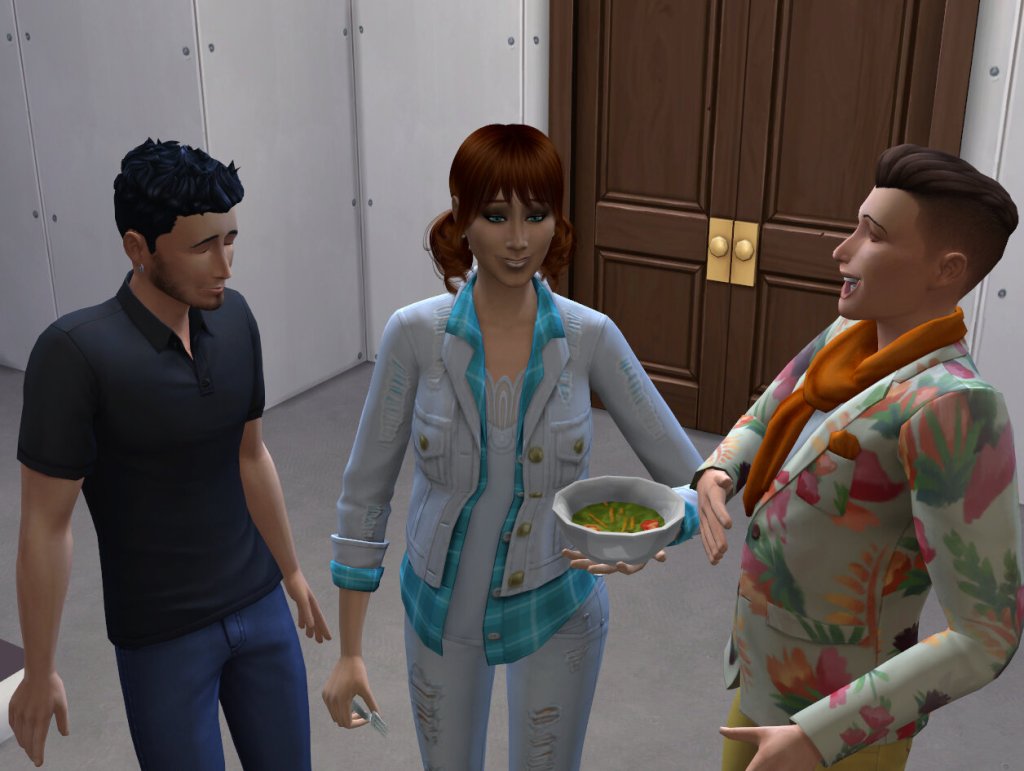 Casey’s over again.  He’s going to be like Tiara was in the last house.  I went into manage worlds and married him to some chick in CAS.  I got a notification from MC Command Center that she’s pregnant.  The family line must carry on! 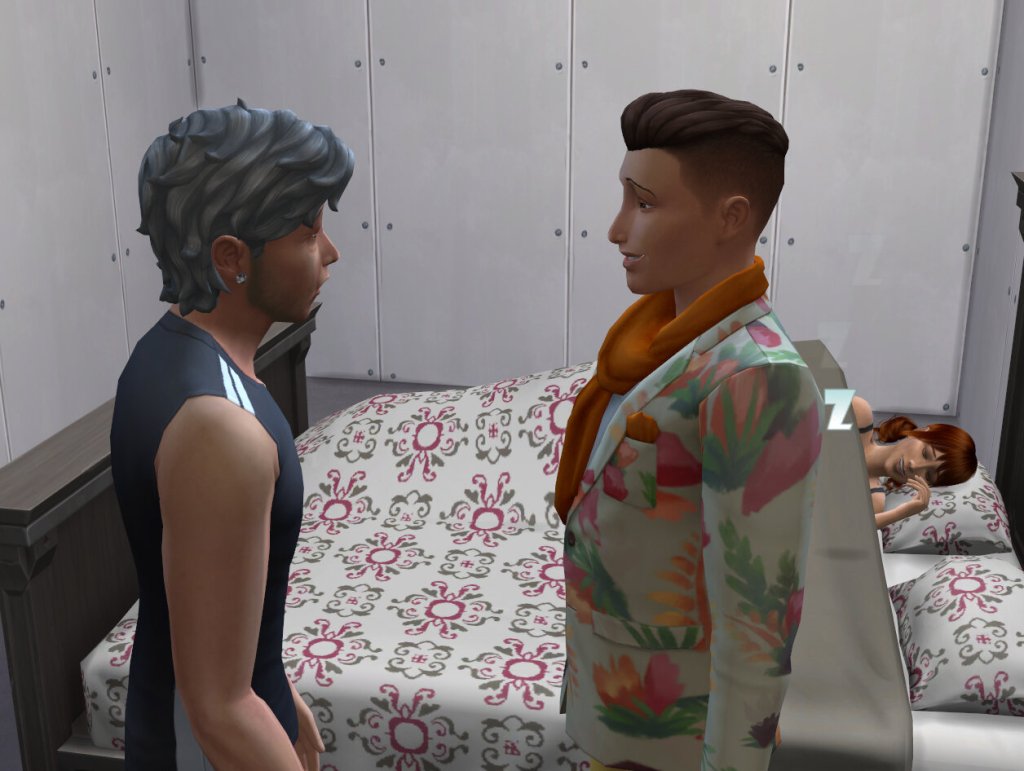 Emerson stops by and the two hang out and talk in the bedroom while Mindy sleeps. 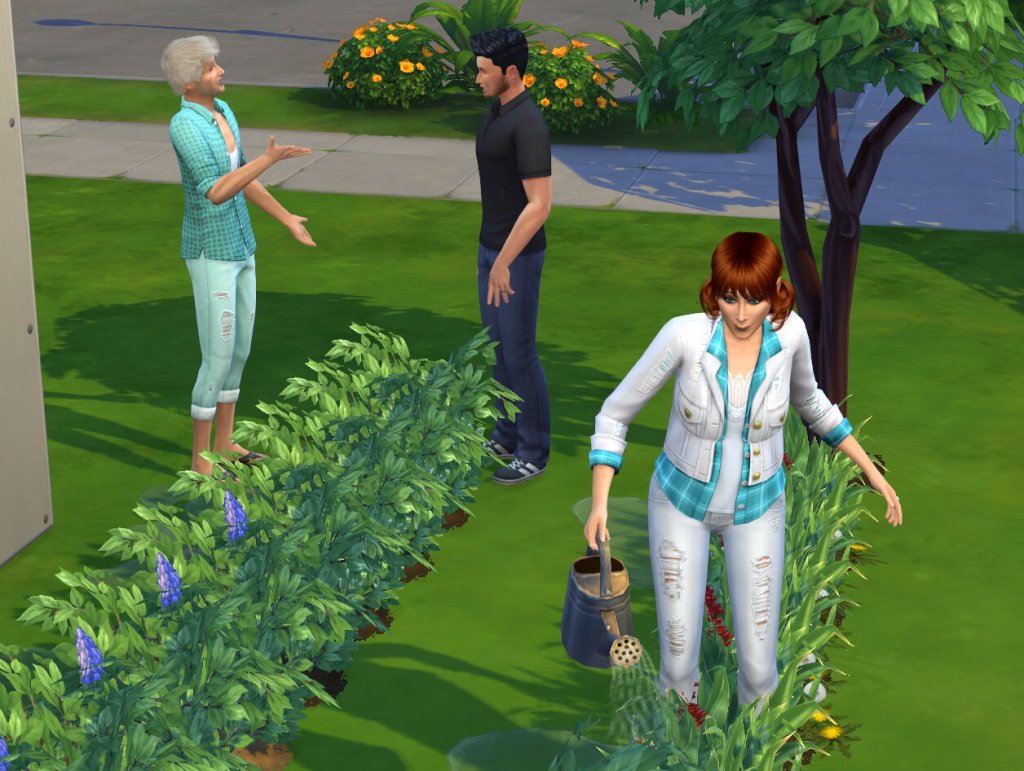 Brock stops by.  Too bad he doesn’t autonomously garden or something. 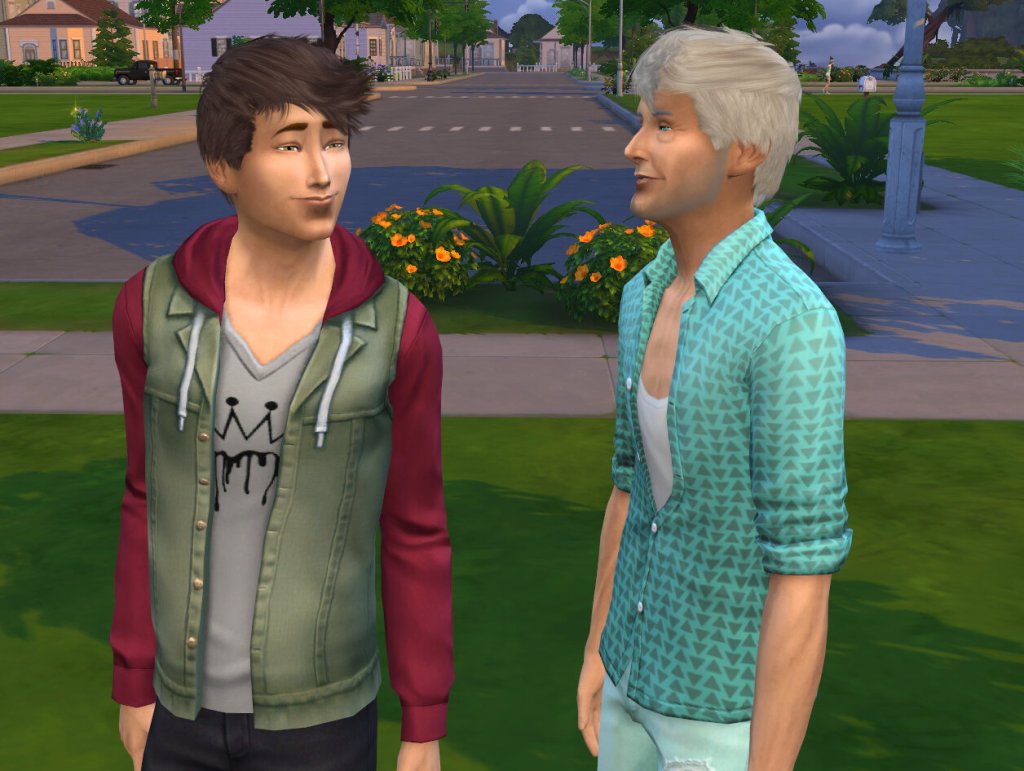 Later Keith called asking Mindy to go to his house, which is against the rules, so she invited him over.  Look how alike they are.  Odd that the game gave him the same hairstyle as Brock.

The struggle is real.  Gotta fix the toilet just to use it.  Meanwhile, the sink has been spraying for days.

I was bored and I kept getting notifications that EVERYONE in town was about to die.  So I thought if I had Mindy throw another party perhaps it would generate some new sims.  The bartender next to her is new but everyone else is the same.  But, she finally met Vihisha’s third triplet!  In the purple shirt is Vernon.

Oh goodness.  When I saw he had 2 skill points in gardening I had hoped he might be like Emerson and autonomously water the garden and one day he did!  He’s only done it once since then, but still.  You have no idea how much help this is!

This day was terrible.  She didn’t garden, she didn’t gather, she did nothing.  She just took care of her needs until she went into labor.

She was attempting to repair the toilet again when she stopped to have the baby, yes I’m too cheap to buy a bassinet, especially when I still have to buy a crib anyway.  His name is Wade Rover.

I moved him into the crib and Andrew ran into the room and picked him up.  It was so sweet. 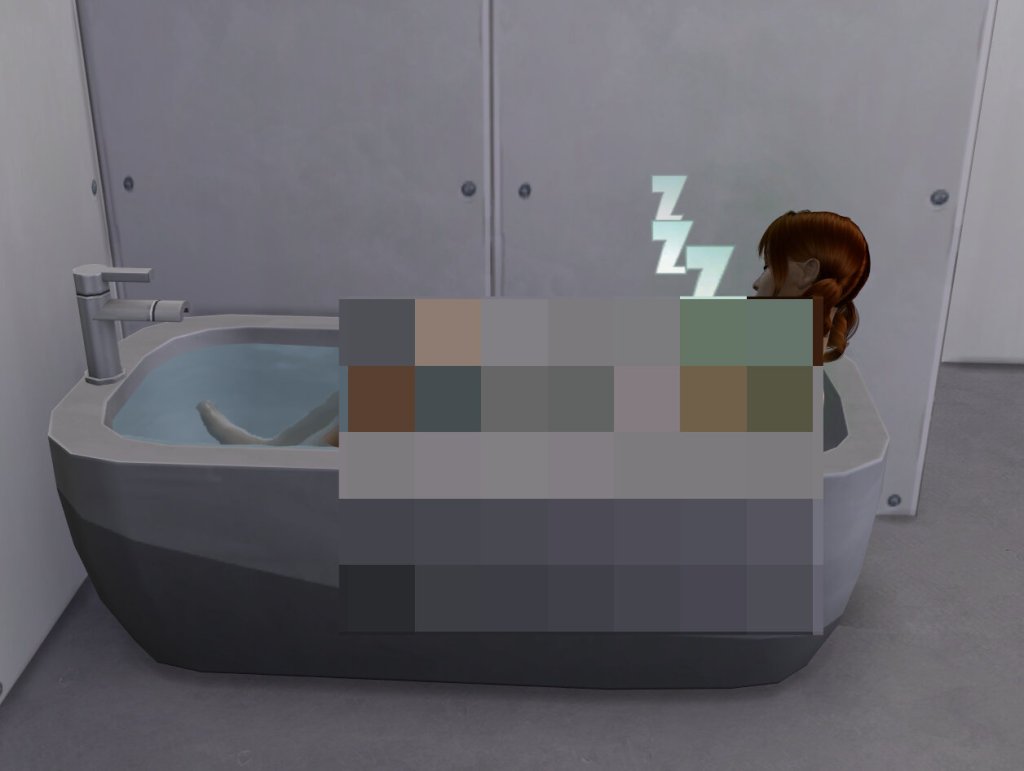 Meanwhile, Mindy didn’t repair the toilet fast enough and peed herself.  Later I remembered the pee bush outside. Geeze.  For some reason every time she went into the shower she got right back out so I gave in and bought the tub. But I couldn’t place it in the bathroom because of the puddles.  So she napped in the tub in the entryway of the house.

Andrew had a brilliant idea!  Since they’d decided to have another baby anyway, why not try for a baby right away? 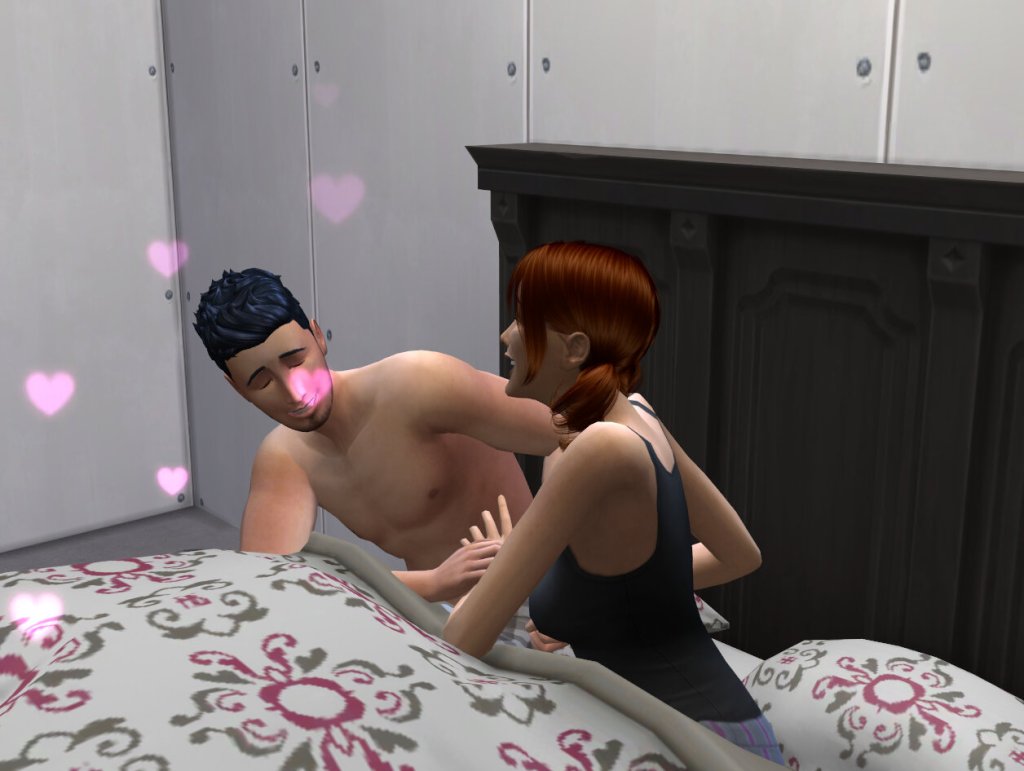 And so they did.

And he was right there waiting to find out the big news while she took the test.

I couldn’t find Andrew and tracked him down all the way over by the big tree talking to Mindy’s dads. 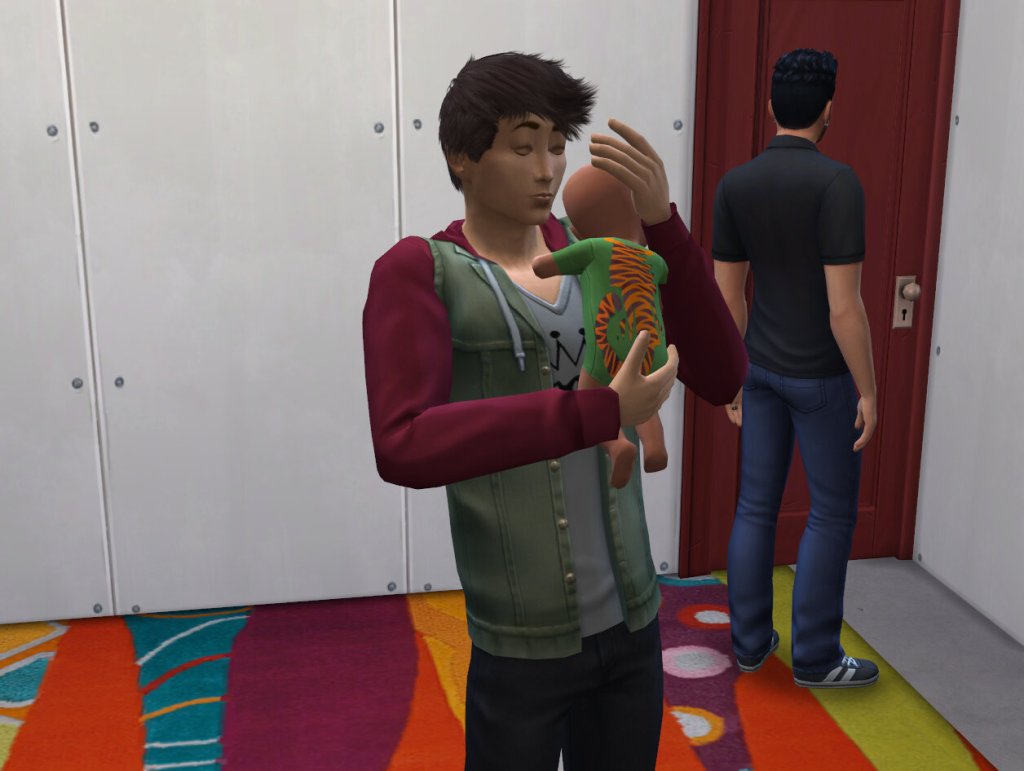 Andrew was actually pretty good about taking care of Wade.  Uncle Keith came over and took care of him while he was there too.  Which I was thankful for since it takes hours for Mindy to tend her garden every day.

It seemed like no time at all when I got the notification that it was his birthday.

I left him in pretty much the same outfit he aged up in.  I got him a toybox and giant stuffed animal and painted the walls and put in wood floors when I bought his bed.  Meet the heir to house 003… unless of course I can’t complete 002 in time!

I know these chapters are running a bit longer than usual for me in this generation.  I suppose I could split them in two but then it would take even longer for everyone to be updated on what’s going on since I have a posting schedule now. It’s a bit of a compromise, more info at once- bigger chapter.  If it seems like too much let me know and I’ll try cutting them down a bit.