Sascha Holt’s grandma is always looking in these logs so Sascha decides to try her luck and finds a limited edition foil Yorier Voidcritter card!

She runs down the street to tell her bestie Isadora about the card.

They rush back to Sascha’s house to do battle with it because Isadora doesn’t have a battlestation.  Sascha was so excited about the new card she forgot she has to train it up first and loses badly.

After the game, Isadora leaves and Sascha sits in her favorite spot next to the speaker to listen to music while she does her homework.  She can hear the toddlers crying and her mommy talking to them upstairs.  She turns the music up louder.

She swears that she saw tentacles coming out from under her bed!  Luckily her daddy shows up to comfort her. 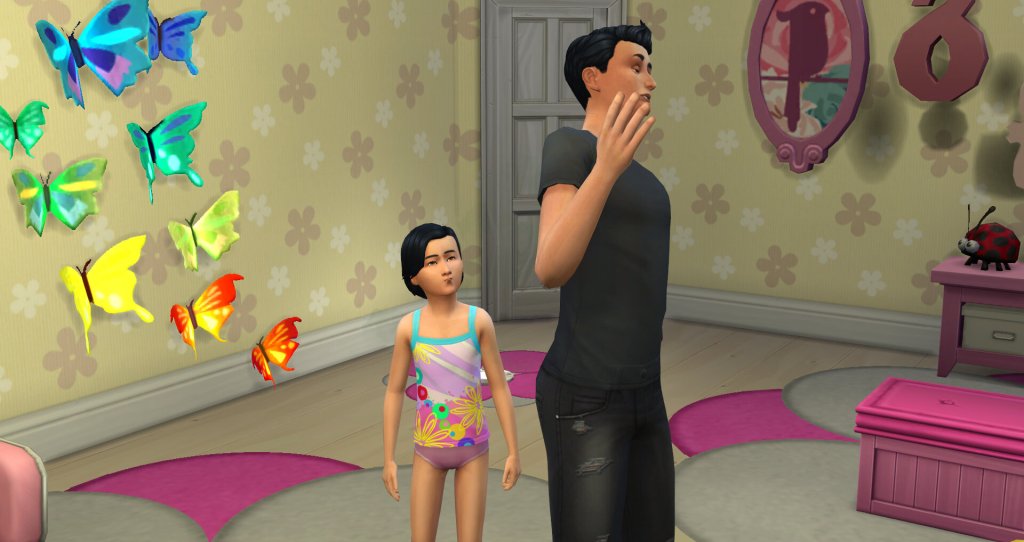 After spraying some smelly stuff under her bed he announces that it’s safe to sleep again.  She thinks he’s making the whole thing up.

After school, she cloudgazes with him and they talk about the twins.  She wonders how long it will be until they can play with her and he says it won’t be long at all. 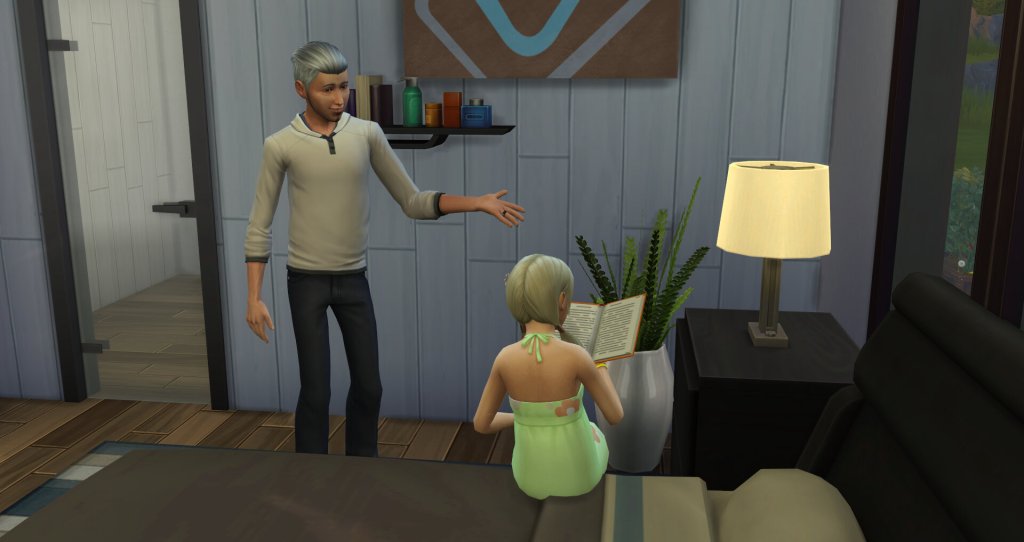 Isadora loves her grandpa best.  He always takes time to help her with her homework.  Her mommy and daddy are always working or busy with her toddler brother Tad.

She’s not happy when her mommy announces that there will be another baby soon.  But then she tells Isadora she bought her a Voidcritter battlestation, she is so excited she forgets to be sad about the new baby. 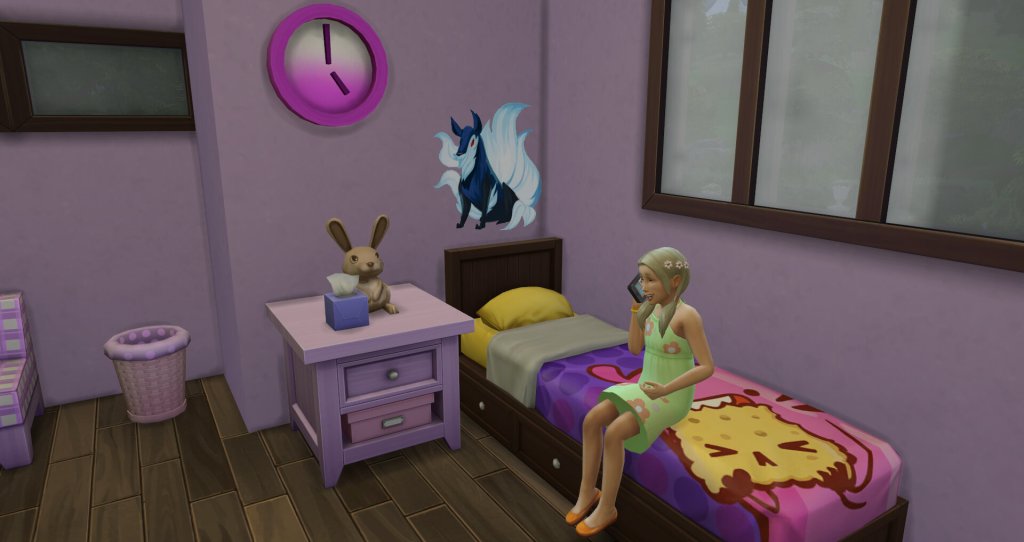 After dinner, she runs up to her room to call Sascha and Liza about the battlestation.

When they were on the phone, Sascha warned her about the tentacle creature that was under her bed and Isadora is sure that she saw something that night.  She ran to her grandparent’s room and woke them up. 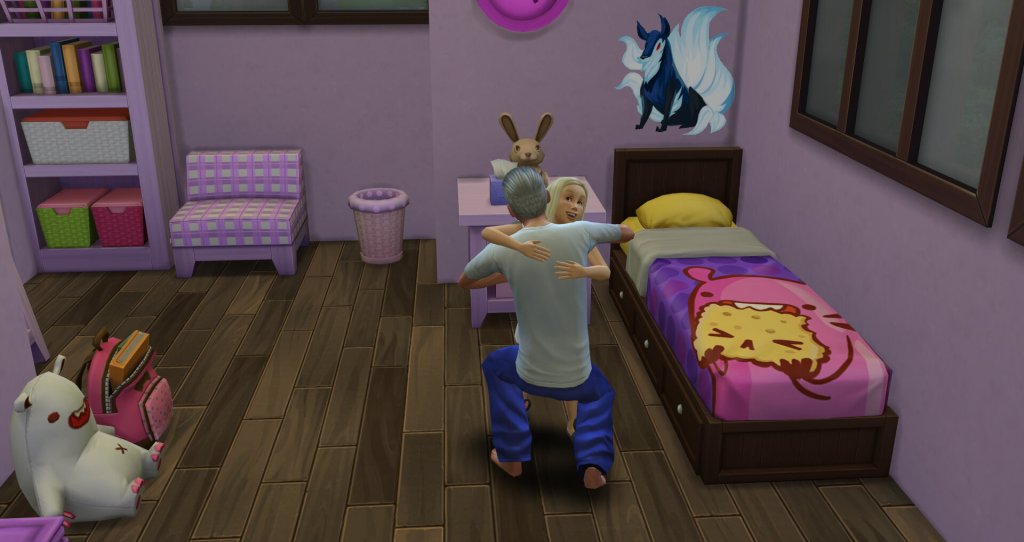 Her grandpa went upstairs to her room and sprayed under the bed like Sascha’s daddy did and Isadora gave him a big hug thank you.

Even though she has her own battlestation now Isadora meets Liza at the club to play.  Liza is sort of related but she’s not sure how.  Her daddy is Isaac. 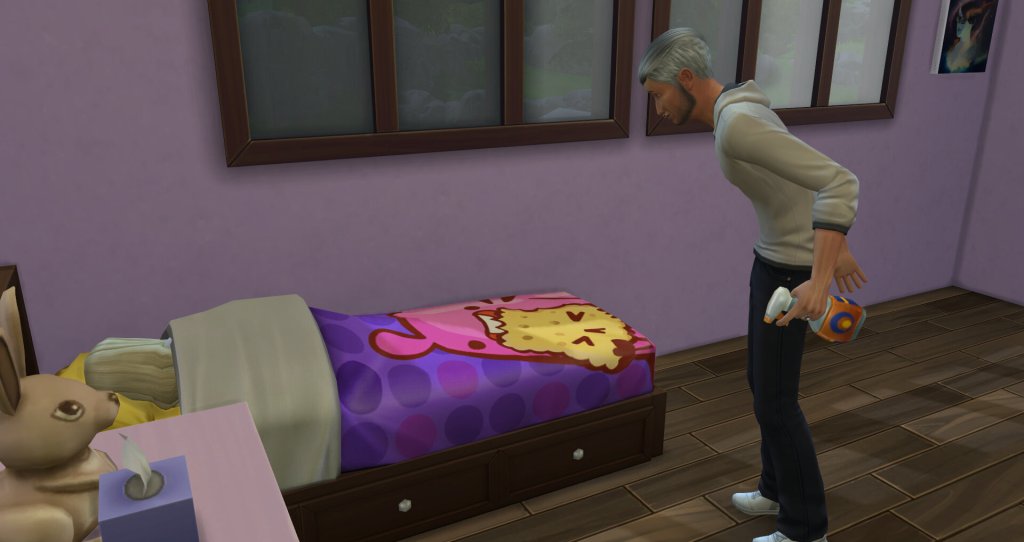 While tucking her in that night grandpa sprays for her so she doesn’t have to worry about any tentacles coming out and grabbing her in her sleep!

Although there are very few screenshots I actually played several days in each household.  A few were before the stuff pack came out and I was waiting for the new content to do anything with the girls.

Mariela and Keegan had twins, a boy and a girl I named Rand and Nix.  The names are both characters from two of my favorite book series.  Avery and Gabe had a boy named Tad, aged up to young adult, he got a job as a secret agent and she followed in her mom’s footsteps with entertainer.  Jasper, Alek and Addison all moved out.  I married Alek to Rowan and Addison to Payton and unfortunately the game married Jasper to some random chick.  I decided that Alek would be the Marx spare to have a kid so Rowan is pregnant.

If you’re wondering why most of the screenshots only have Vaughn with Isadora, it’s against the rules for me to make Amira have any interactions with a possible heir.  All of her interactions must be autonomous so that I can’t cheat towards one or the other by giving them a better relationship.  Whichever has the best relationship when either she dies or they age to YA is the heiress.  Also, Avery and Gabe just got jobs and were either working or upping their skills for work.  I’m thinking of having Amira retire so she has more opportunities to spend time with the kids.

I did take several shots that didn’t fit in with the whole “time jump” that I’m saving for the outtakes chapter. Unfortunately, this won’t be the only time jump since the Marx family has one more baby.