I logged into the game and the house was utter chaos.  I forgot that I saved during Wade’s birthday party and everyone was still there.  The stupid caterer kept starting cooking something and then stopping.  The place was a disaster by the time everyone left.  Meanwhile, Wade gardened. 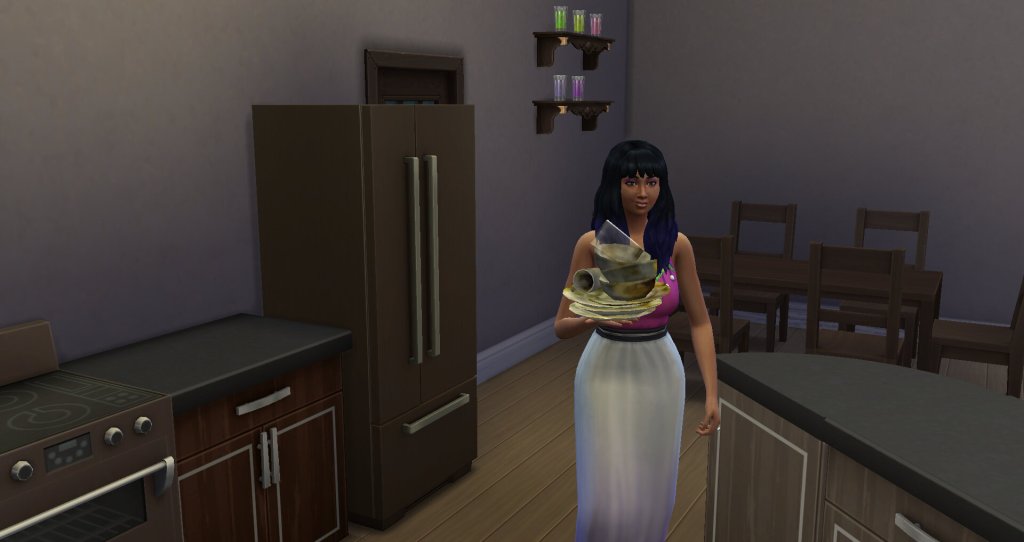 Oh Fernanda, you’re cleaning?  Wow.  I had already hired a maid but they wouldn’t start until Monday so I just left the house a mess. 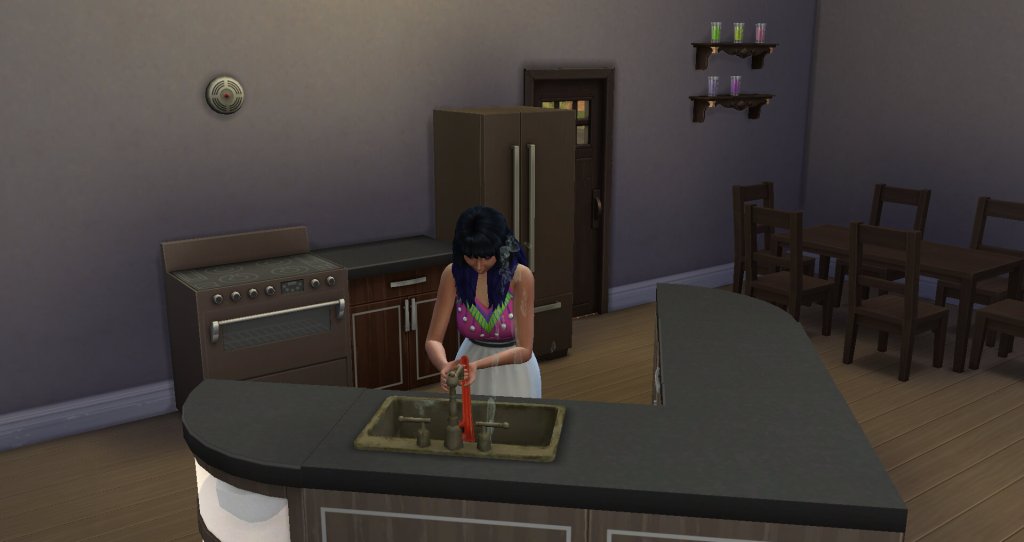 This is the first time I’ve seen a sim autonomously repair something.  The odd thing is she had no handiness skill. Umm, I wanted Wade to fix that. 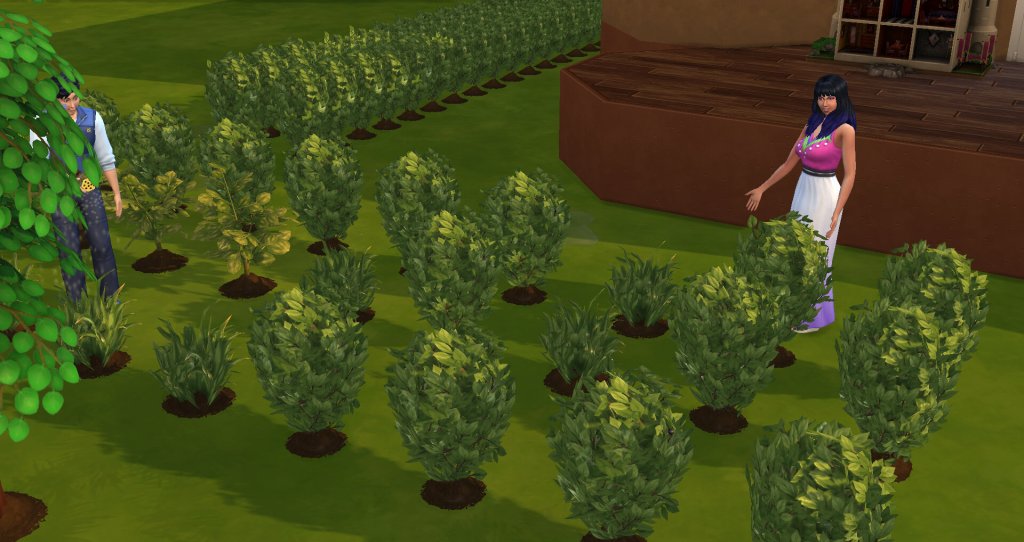 Okay, every few hours one of the sims in the house comes out to complain about the mess of the water on the grass. It’s super annoying.  Then they’ll want to talk to Wade and follow him around like a puppy dog.  It doesn’t up his social and they don’t appear to actually talk so I usually just cancel it out but it happens constantly. 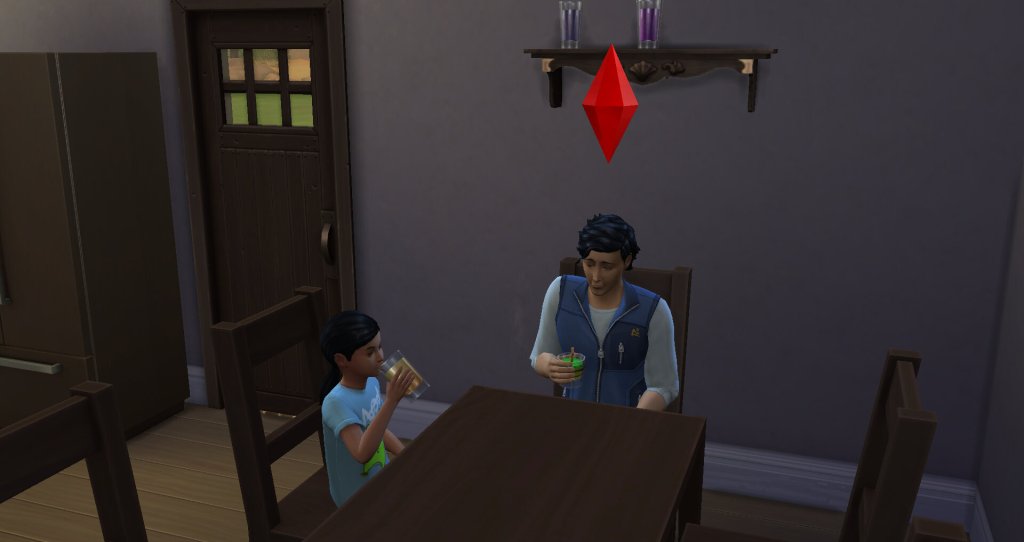 I left the plumbob there on purpose to show how miserable I was making the poor guy.  He gardened pretty much non-stop for days using 2 moodlet solver potions.  I prefer these to the sleep replacements.  They’re only 100 points more in price and max all of his needs not just energy.

He was running low on aspiration points and wanted to talk to Brett and share ideas so two birds with one stone. Brett is so darned cute! 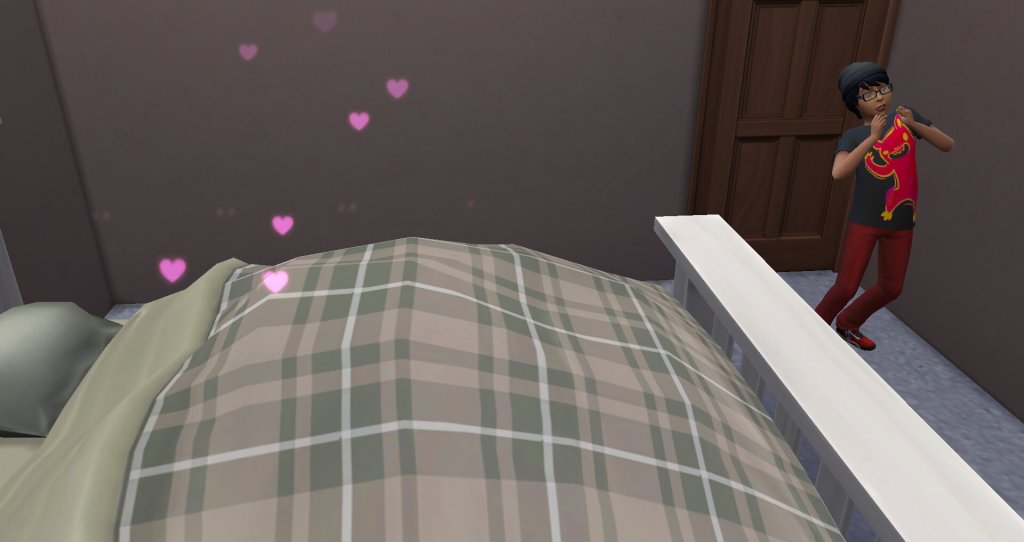 Then Wade wanted to woohoo with Fernanda.  For some reason, even though there’s another bathroom, Brett decided to go in there to use their bathroom. 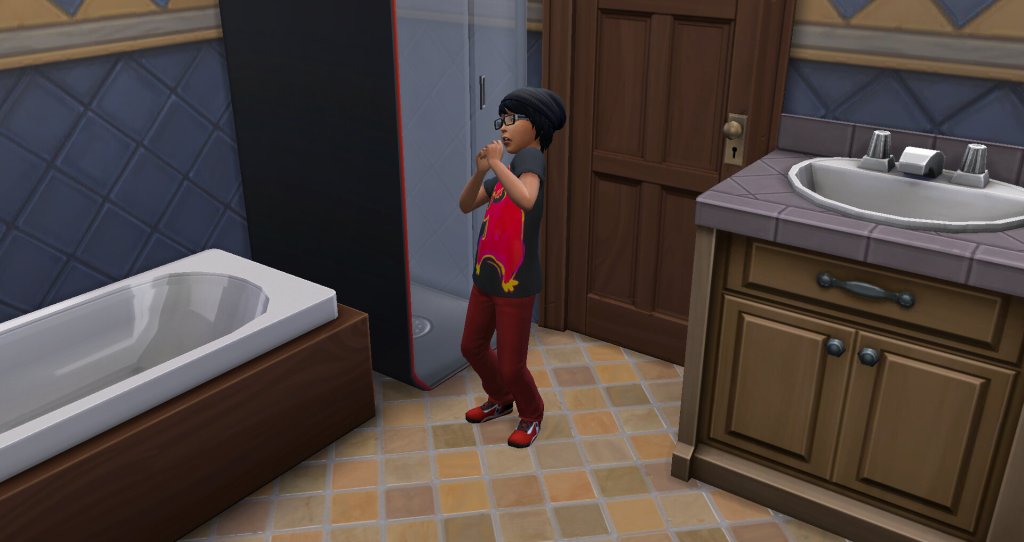 The kid is scarred for life.  He did it again.  I checked the other bathroom, nothing was broken.  He forgot to use the toilet after the second time walking in on them.  He just stood there in the bathroom in shock.

Wade’s friend Damien, the evil guy I almost moved in, showed up and he took the time from gardening to invite him in.  Mistake.  Damien followed him around the entire time he was there while he gardened. 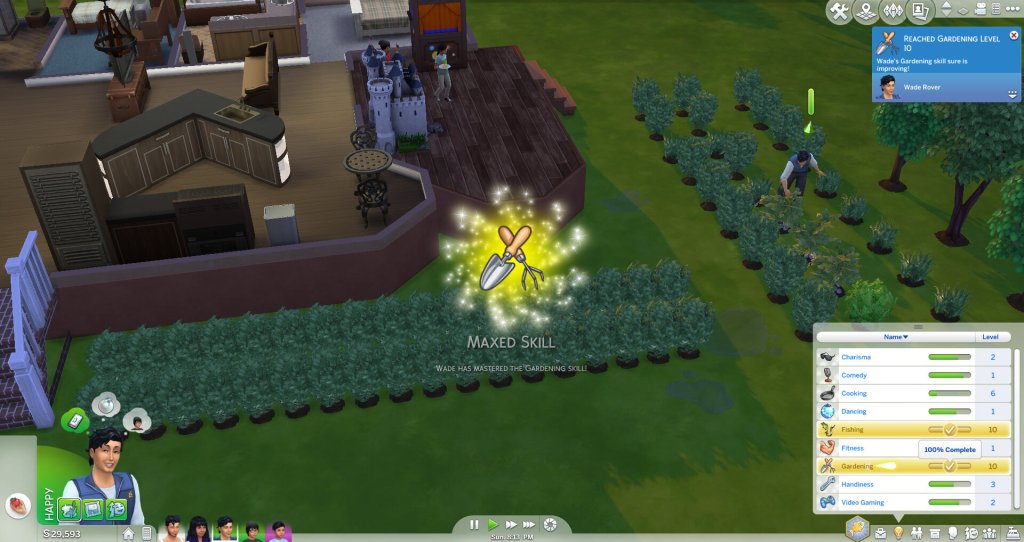 I had every intention of just getting a park from the gallery.  But when I got there I decided to build one.  I thought it would be cool if all of the lots in this save are by me.  It took FOREVER.  I immediately had the family go visit. 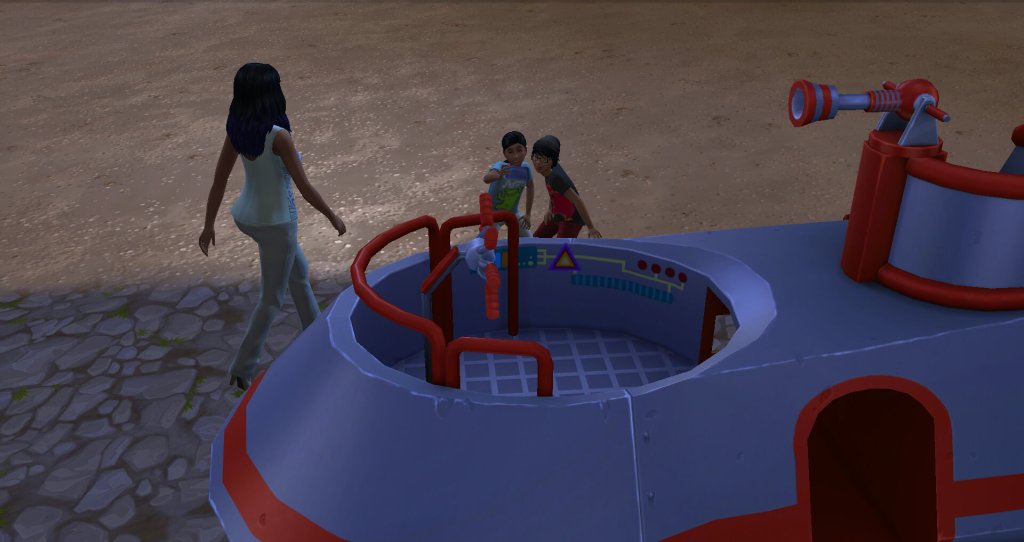 The kids go strait for the playground.

While everyone is having fun Wade gets back to work trying to catch the last 3 fish he needs for his aspiration. 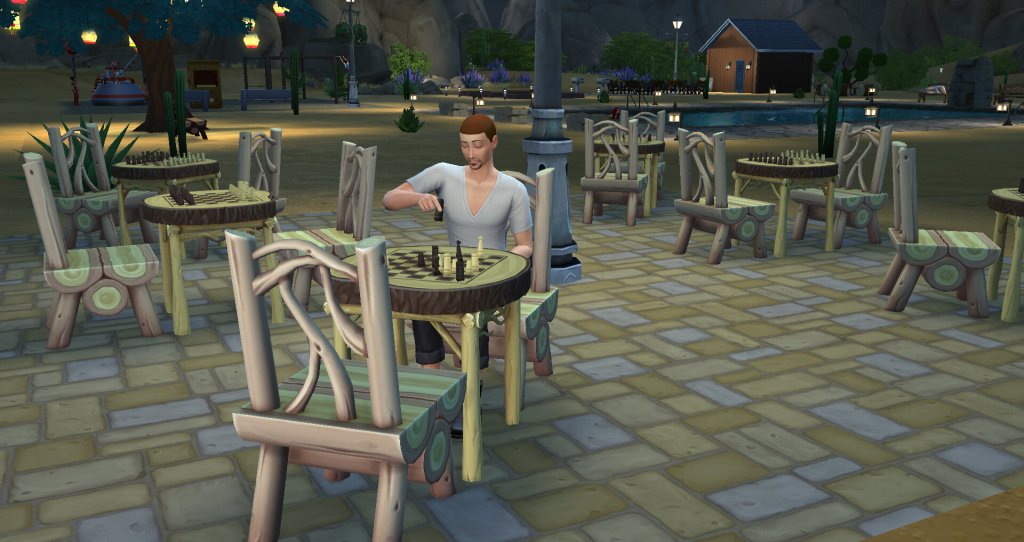 I just took this picture of the random townie playing chess to show the chess area. 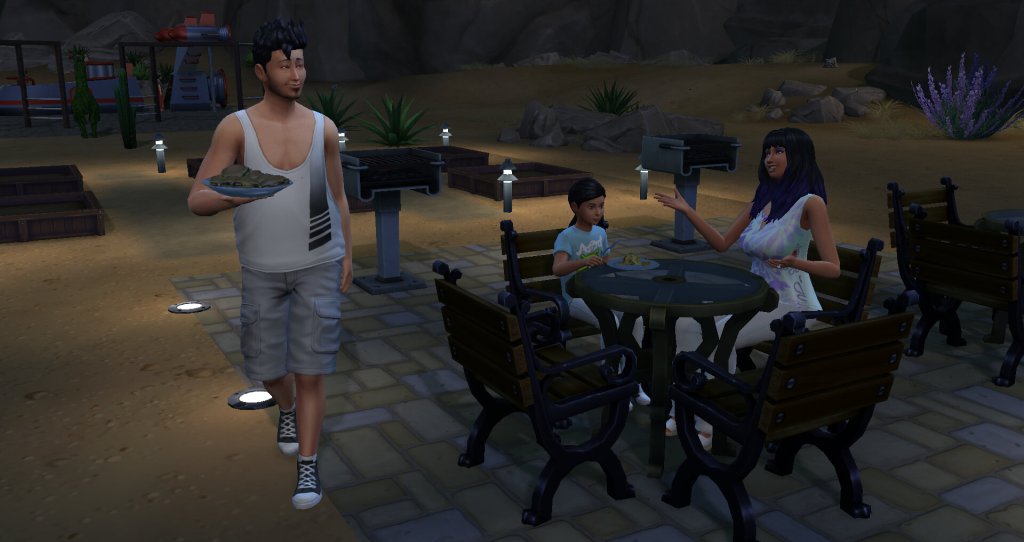 Yay Colton used the grills.  There’s definetly a feeling of satisfaction watching sims use the stuff I put there. 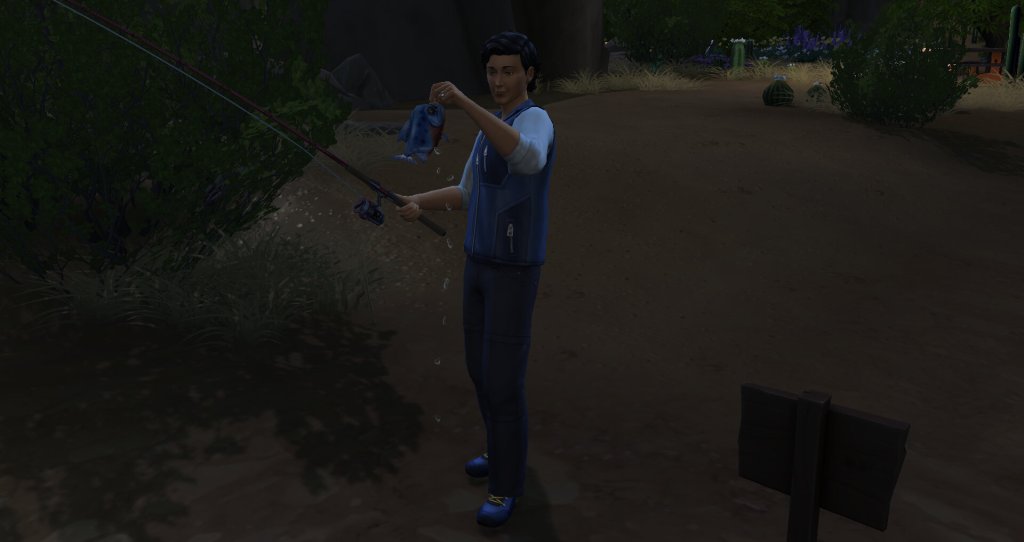 A piranah!  Two more to go.  Ironically, they are both common fish.

Everybody is tired, except Wade, so they head home and I realize how terrible the house looks unfinished.  There was really no reason for it.  I’d had the money for awhile now and have just been lazy.  I have to be in the mood to build.

Wade was feeling confident about catching a fish.  Poor Wade.

One bonus essence of confidence.

I am so freaking excited about how this house turned out!  I know I could have done more to it but I was already way over budget. 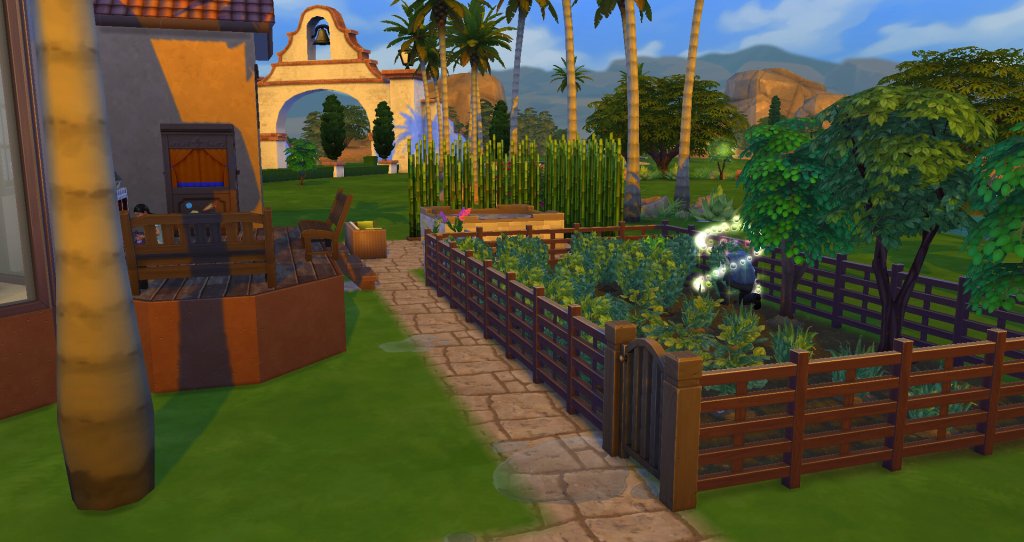 Here’s the back yard.  I had planned on putting the hot tub on the back deck but realized I’d have to make it huge.  I kinda like it being a kids area.  I sold the extra blackberry bushes that I was using to up his gardening skill and made a little fenced in area for the rest.

I decided to stick with the weird V shaped counters and added a popcorn and icecream machine to them.  I added a few pictures and nicknacks here and there as well.

Back to the park to fish.  Wade and Colton had been there all day.  After the kids got out of school and Fernanda got out of work they joined him.  Poor Patrick was still sad about something.  Casey Williams died, he lived with Patrick in house 002, but I don’t think non-active families get the mourning moodlets like they would in Sims 3.

I got the notification that a new fish had been caught and paused it in time to see this lovely bass.  That’s right, we’re waiting on a bass.  Common fish, told ya.  One to go. 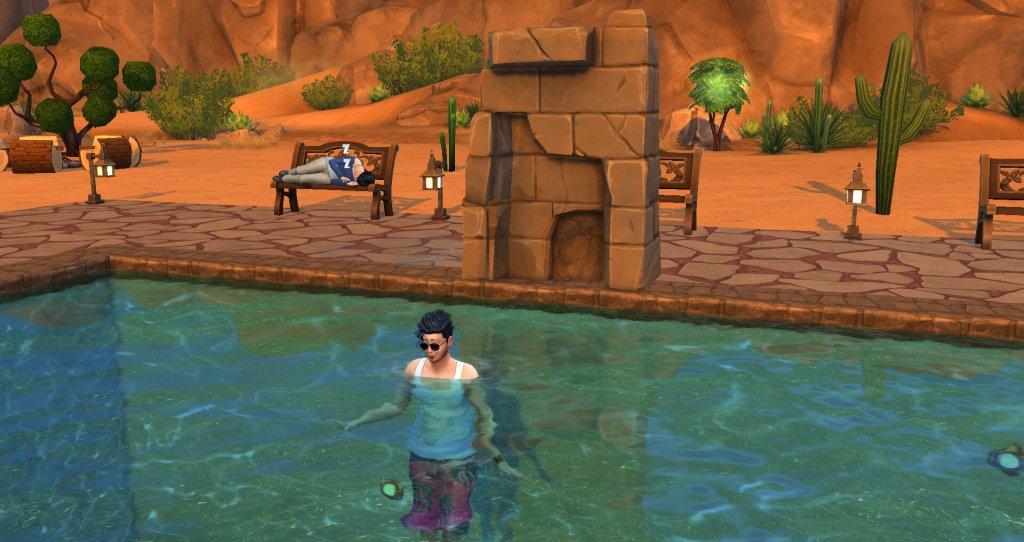 I didn’t catch Colton diving into the pool in time but thought I’d take a pic to show how much he was enjoying himself.  I made the pool the centerpiece of the park.  I figured Oasis Springs, sims would want to cool off.  I started with the pool and built around it.

Awe yea!  He caught the perch that he was missing and achieved his aspiration.  I had my finger over the key to take the screenshot just in case.  House 003 is complete people!

Angling Ace completed, fishing and gardening skill maxed, 6 emotional essences.  I have a self-imposed goal of maxing his handiness skill and opening the Forgotten Grotto during this house as well so I’m not done yet.  His handiness is almost 4 from fixing stuff around the house.

Heir age check- 5 days ’till teen.  We’ve got awhile.  The next chapter will most likely be a long span of time.

House value check- $58,484… Told ya I went over budget on this one.  I haven’t uploaded it to the gallery yet because I figured I might make some changes as I play while waiting for Brett to age to young adult.