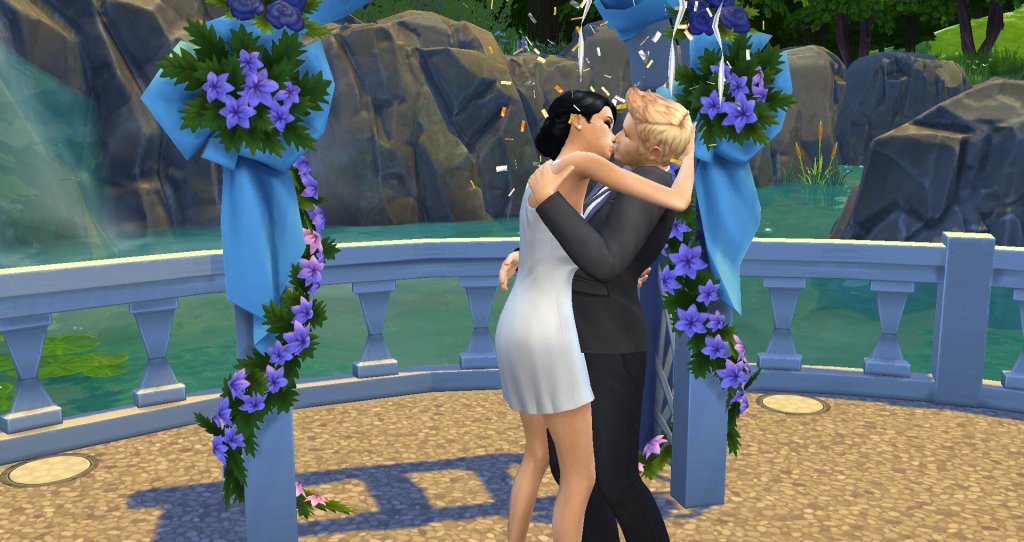 Davin had the day off of work so they all went to Von Haunte so he could marry Sheena.

Not the most thrilling honeymoon.  He still had to complete paintings for work the next day. 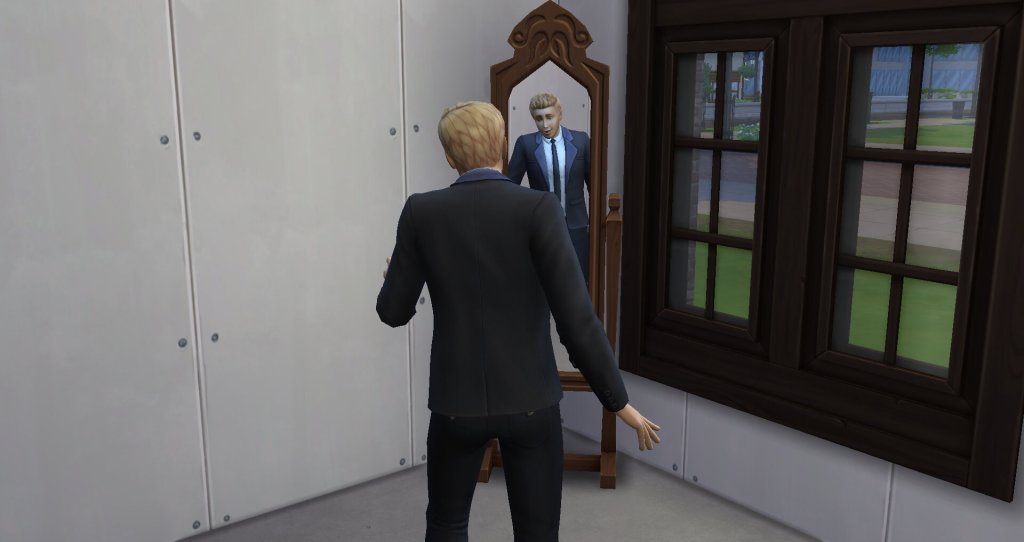 Then he worked on his charisma.

I did remember to have them take a wedding selfie.  I wish I would have thought of it when they were still at Von Haunte.

Yay!  I was so excited because I thought she could have a baby now… but then I remembered Davin is still behind her.  So I decided to wait.

Originally Lexa had the next day off and I’d planned to get her and Ace married then but with the promotion she had to work the next day so I took them to get married quick. 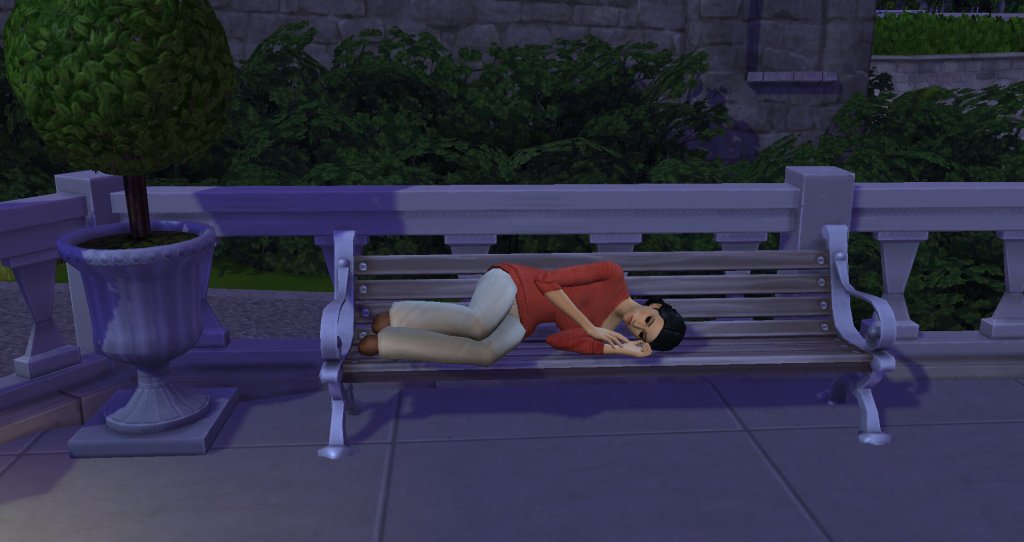 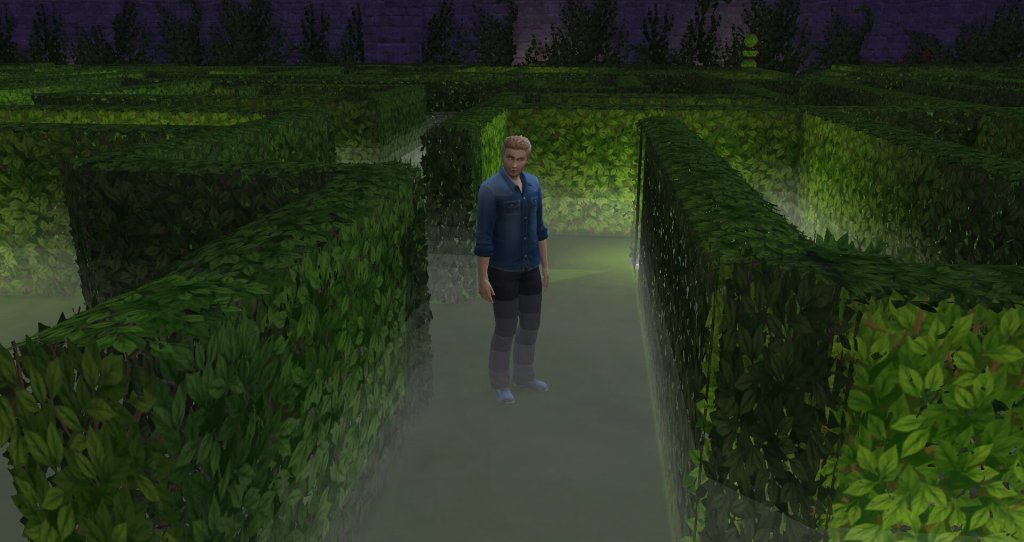 …and Davin was in the maze looking really aggravated.

I guess it’s a house 005 wedding tradition… come home from the wedding and paint. 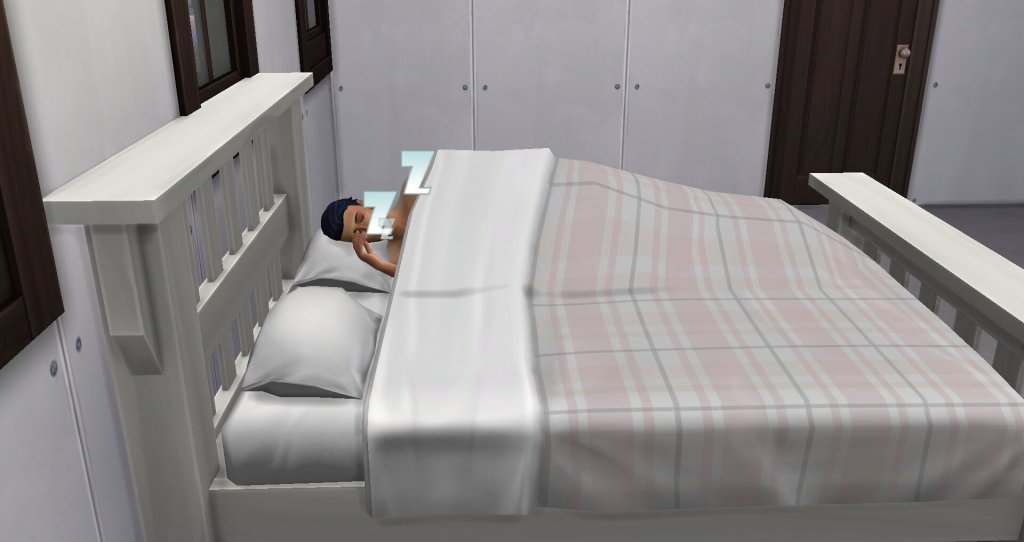 While the one you married does something else.

The next day Davin was really close to a promotion and I decided to heck with it and had Lexa and Ace break in the new sauna by trying for baby. 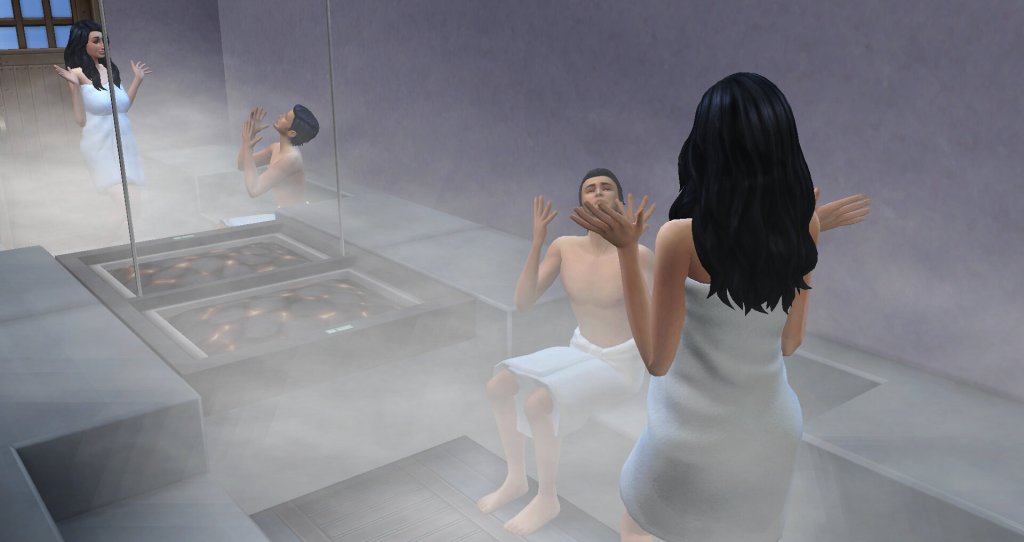 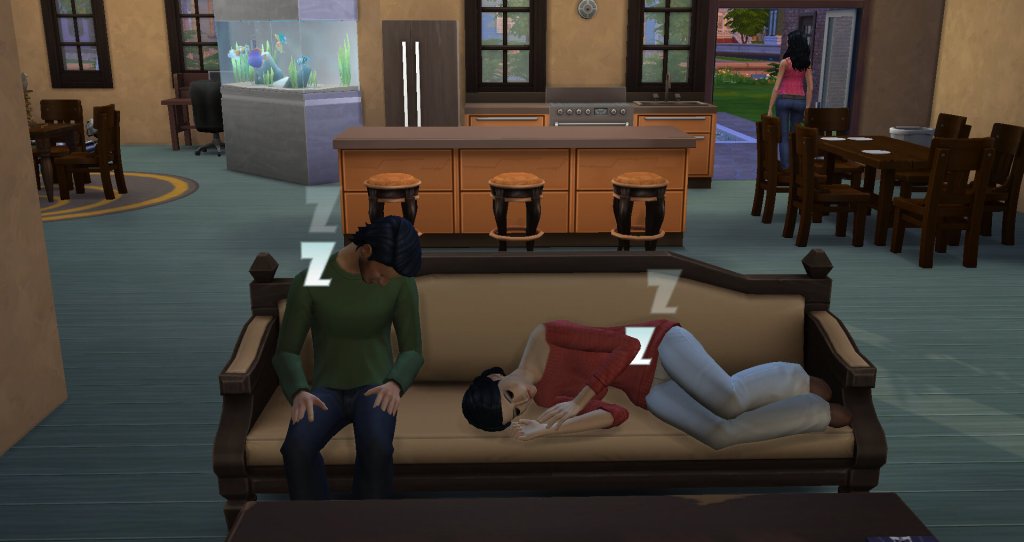 Umm guys?  You do have beds.

Time to grind out the last of that logic skill.

Lexa got the last masterpiece she needed to complete her aspiration.  Davin did a couple days later.

She had tons of points so I got night owl and morning sim.

There’s a table and a bar inside they can eat on.  I guess at least the pool is getting used.  Not as much as when it was the little 2×2 one, though.

Yay Davin!  I knew you could do it. 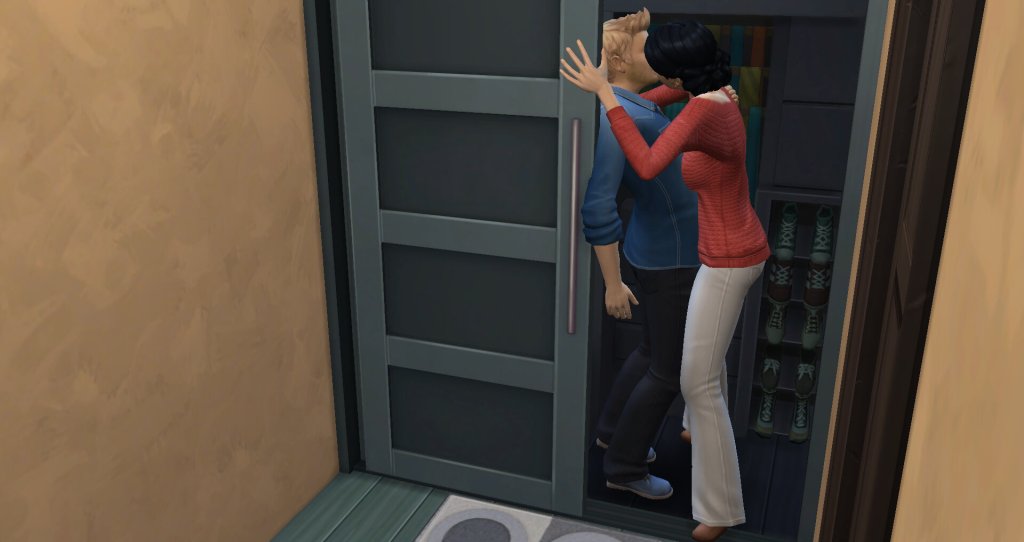 Time for Davin and Sheena to try for baby too. 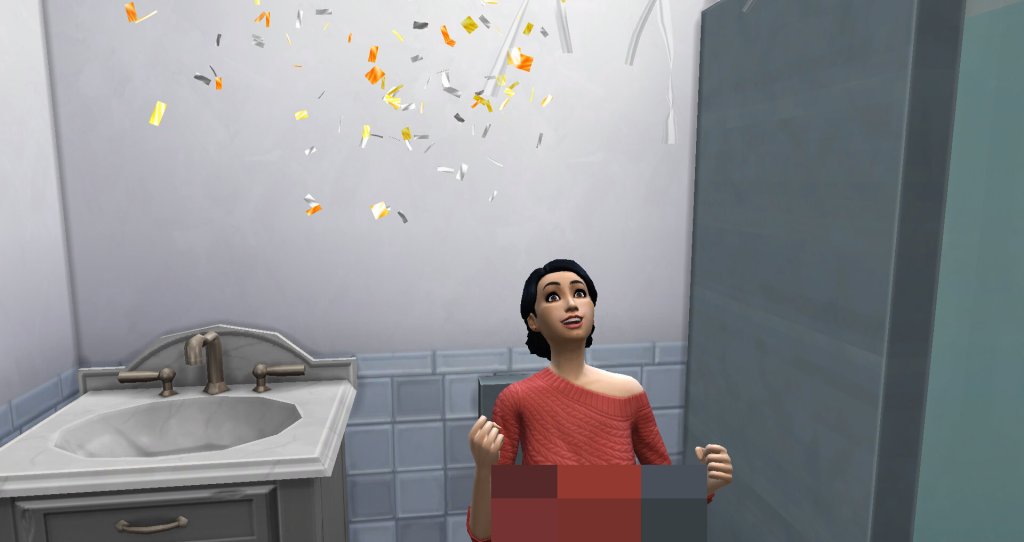 Yay another nooboo on the way!

She woke him up to tell him.  He seemed really excited too.

This was hilarious.  I saw her running towards the corner of the lot and wondered what on earth she was doing.  She ran all the way to the bush to throw up! 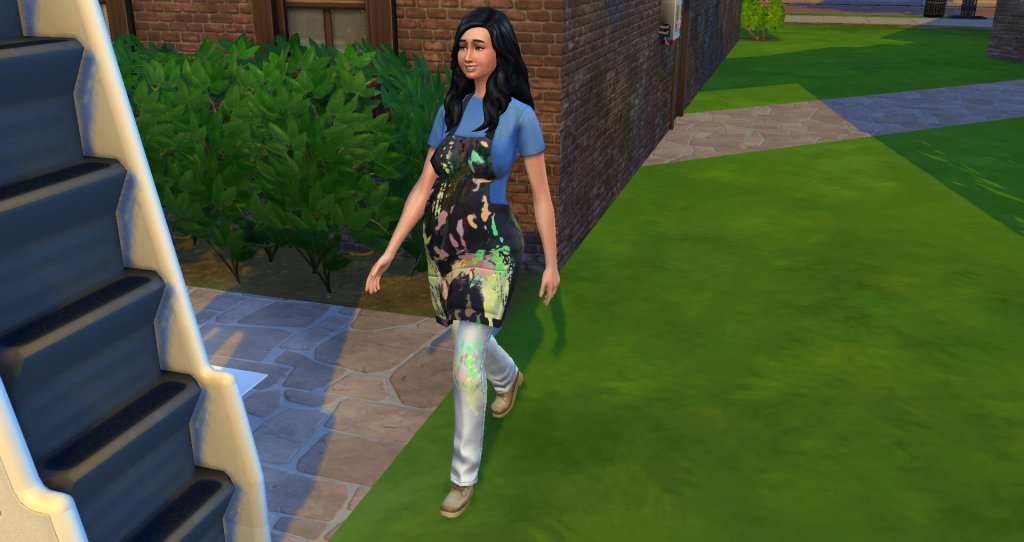 So far I haven’t seen Davin in a work outfit yet.  But all of Lexa’s have been really cute.  Awe look at that baby belly! 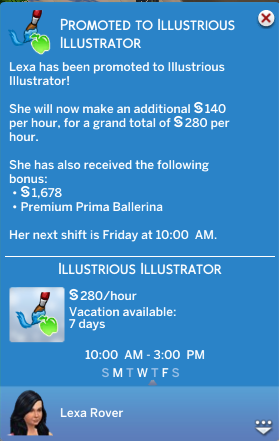 Awesome!  This is going quicker than I anticipated. 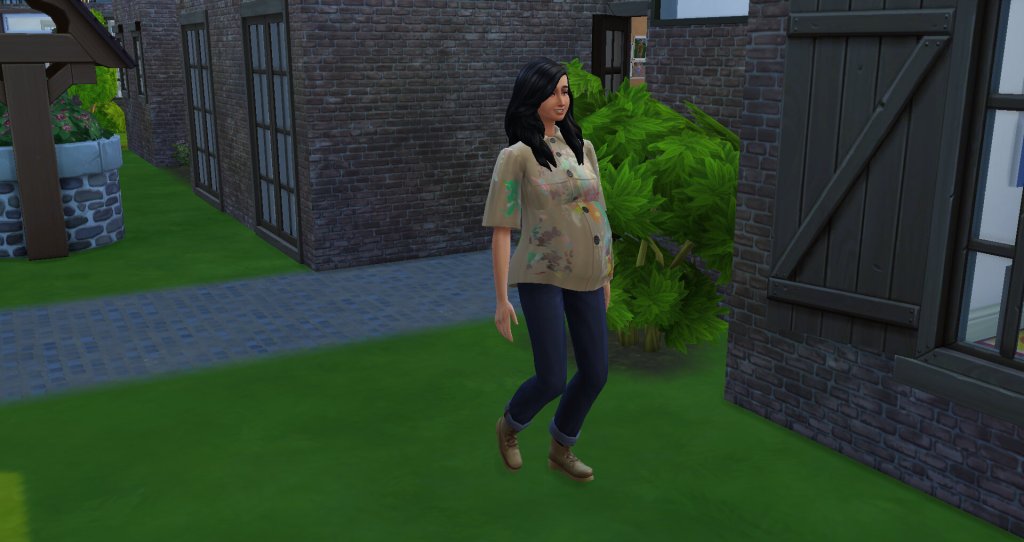 She had to go to work the next day and I made sure all of her needs were totally full before she left.  After that, she’ll have 2 days off to spend with the baby.

Ace feels the baby.  Boy is she huge!

It popped up that it’s Ace’s birthday so I had him blow out the candles quick before the birth. 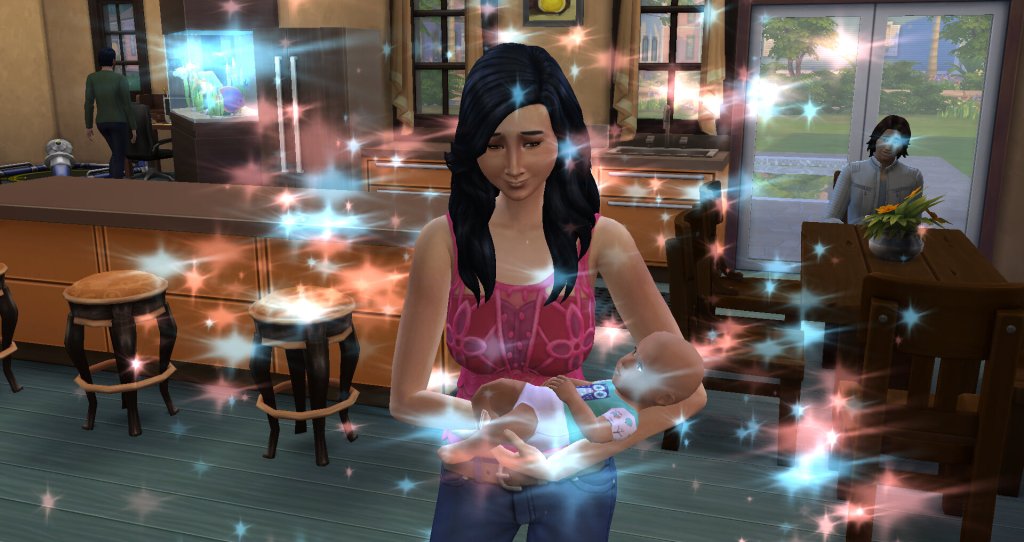 Whew that was a rough one eh?  Well, twins will do that to ya.

Holy cow!  I think this is the most expensive masterpiece I’ve had a sim make.

Awesome!  I definitely could have had kids sooner. 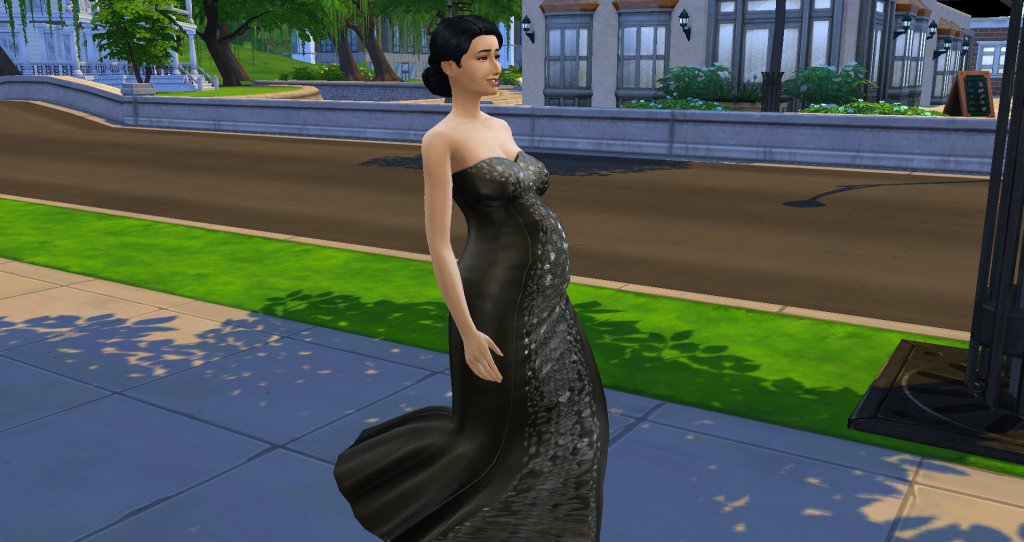 Ugh, poor Sheena.  Unfortunately, I couldn’t get her needs up before she went to work the day she was due to deliver.  Also, isn’t that dress lovely?

She came home, collapsed into bed and then hopped right back out to give birth.  It’s a boy!  I was soooo hoping for a boy.  His name is Trent.

I couldn’t get them all into one crib so I put in another.  I’ll have to make the kid’s room bigger.  At least Davin and Sheena didn’t have twins too!

This chapter was just under 6 days.  I decided not to go for 7 this time because I already had taken more than the usual amount of screenshots and knew with the girls aging to children the next day that there would definitely be more.

Careers check: Both level 9, Lexa should get promoted soon.

House value check: $109,742 and I’ve still got more I want to do… that masterpiece that Lexa painted took them over the $100,000 mark.  I’ve been decorating the house with paintings now.