With all of the additions to the house they’ve all found new things to distract them from what I want them to be doing when I’m not watching.  Ya know, that Tween tv thing would be cute… if everyone didn’t watch it as a default. 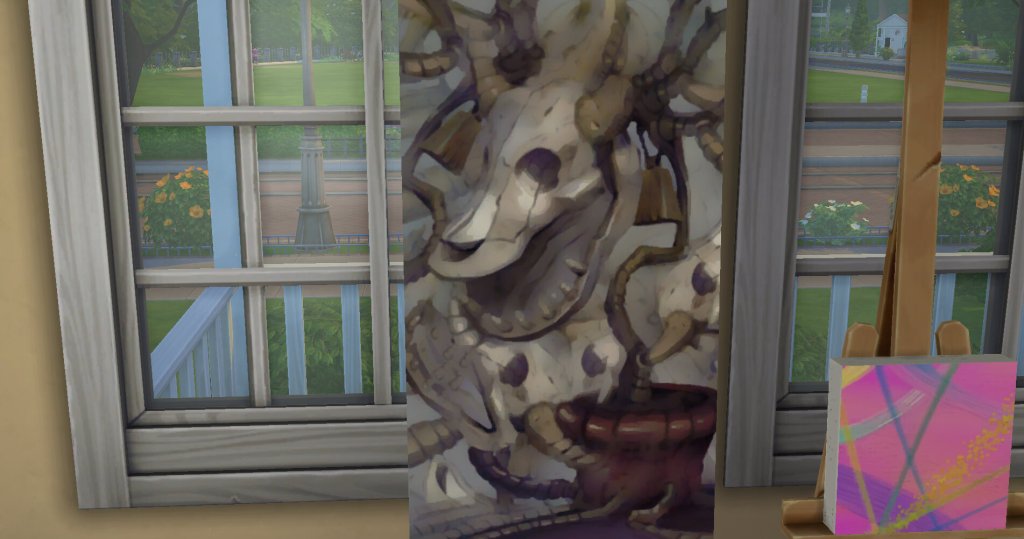 Also, this would have been so cool in house 003.

At least somebody’s working.  Kelsi gets her first bestseller! 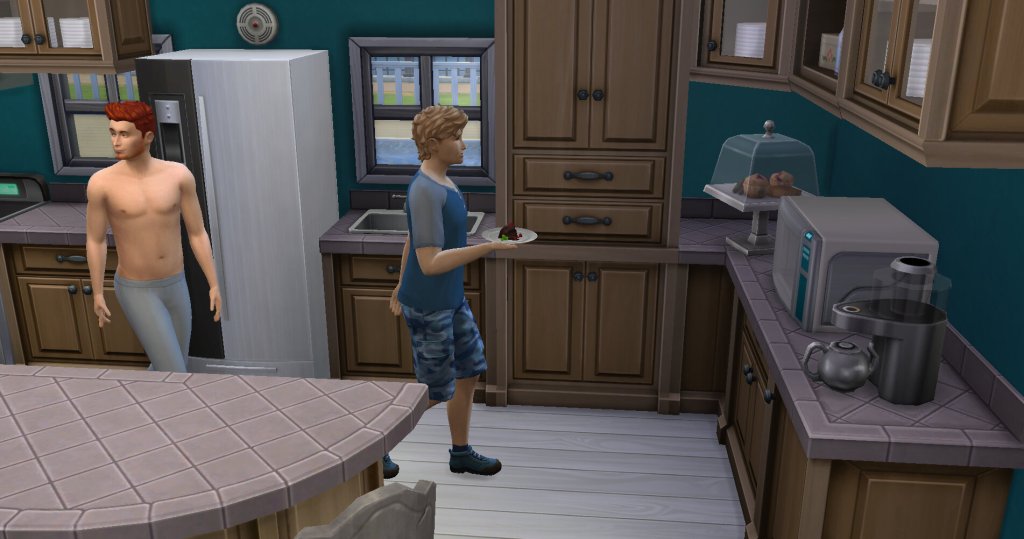 I got the microwave because I thought it looked good, not because I wanted you to use it.  They always get uncomfortable “cold in the middle” moodlets from microwaved food.

Kelsi cooks up some french toast and pretty much everybody was hungry.  Poor Trent couldn’t sit with everyone else. I did try making the bar to seat 8 but it looked really goofy no matter how I did it. 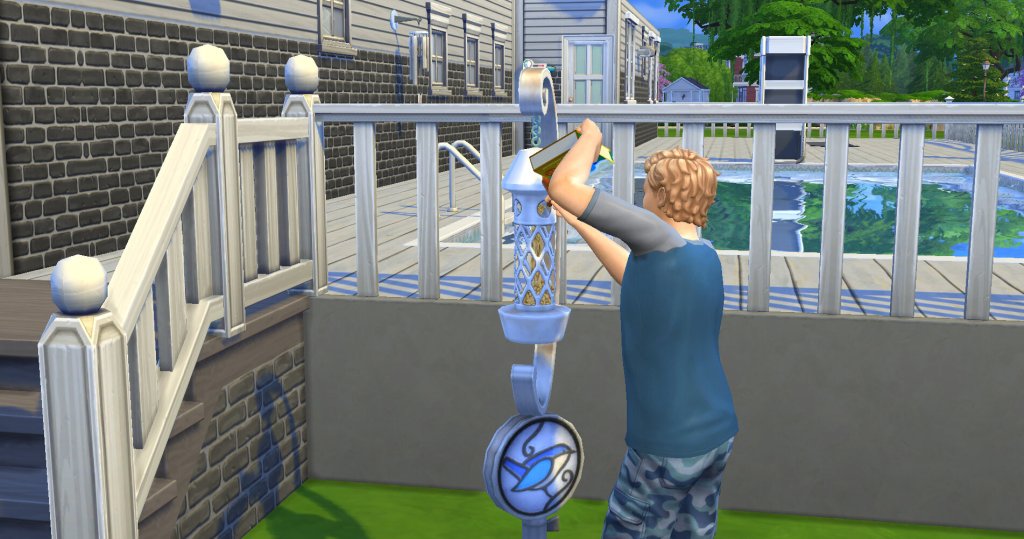 I was just sitting here watching them and then I remembered that I had wanted to add the wind chimes and bird feeder!

Everybody’s back to work.  They all seem so happy in there jabbering away and listening to music as they paint.

This is really annoying.  After every painting she automatically starts heading outside to mourn Ace.  You didn’t know him dangit! 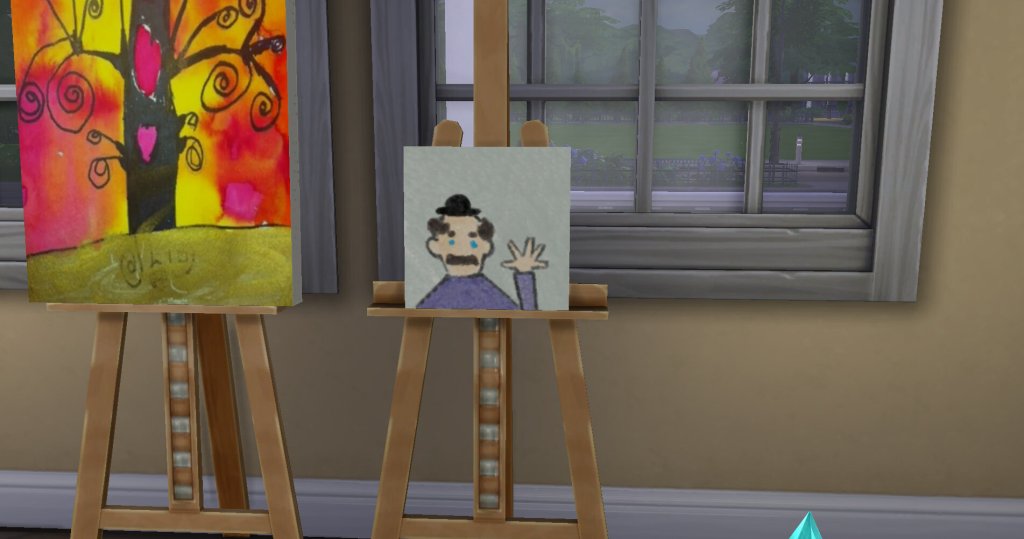 I decided that I wanted to start using their pictures more around the house to get to the required 15 paintings… so of course, everything they made from then on looked like garbage.  What on earth is this thing?  I’ve never once seen this painting.

Or this, which would have actually looked good in the kids room if I knew the heir was going to be a girl.

Are you kidding me?  Now you’re just doing it on purpose! 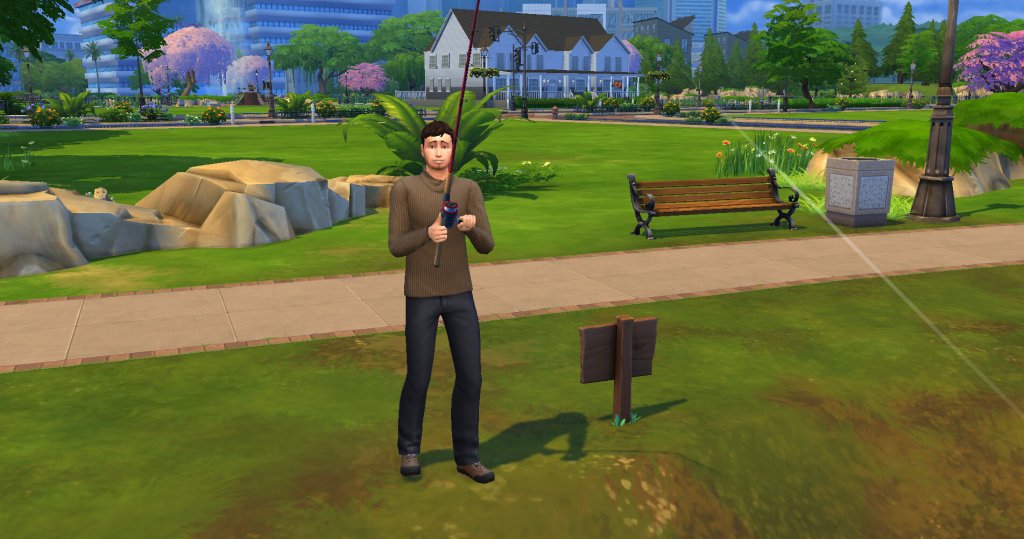 Poor Dillan.  I forget about him all the time.  He just fishes the day away.  I usually forget to send him to work.  One day he came home and it said he did a terrible job at work that day.  I just laughed.  I think he went for 2 hours.

There are some benefits to his fishing in addition to the money.

These two are so cute.  Always flirting with each other while they work.  I love it. 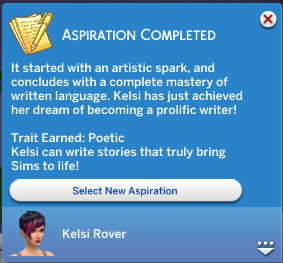 Flirts with hubby while writing one bestseller after another!

I was watching them, waiting for Trent to finish eating and Hayden to finish his tea when I realized I have a habit of giving my guys pjs without shirts.  Can ya blame me?

Bronson was getting his groove on to the music in the office and I noticed his cute bunny slippers.  I had them both retire when it popped up that it was almost their time. 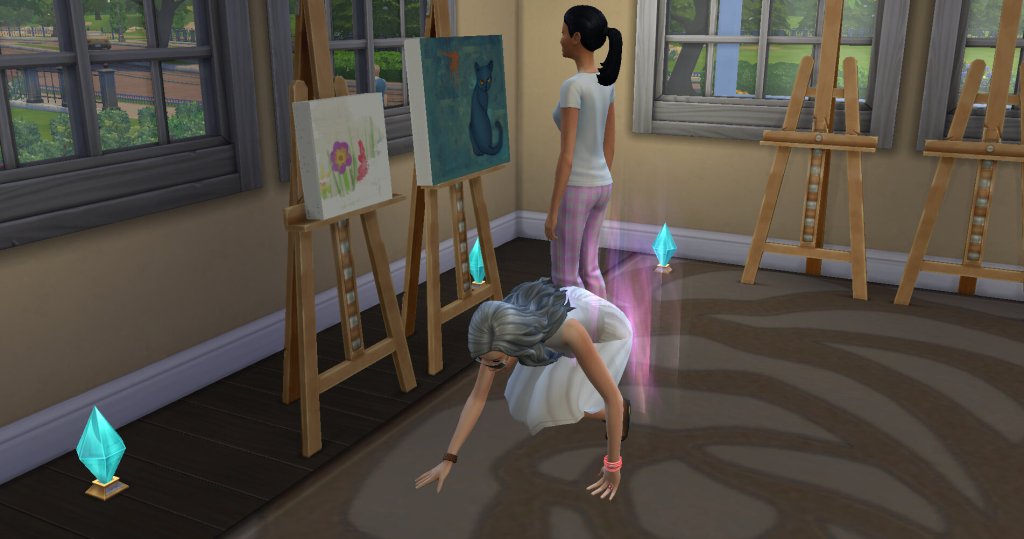 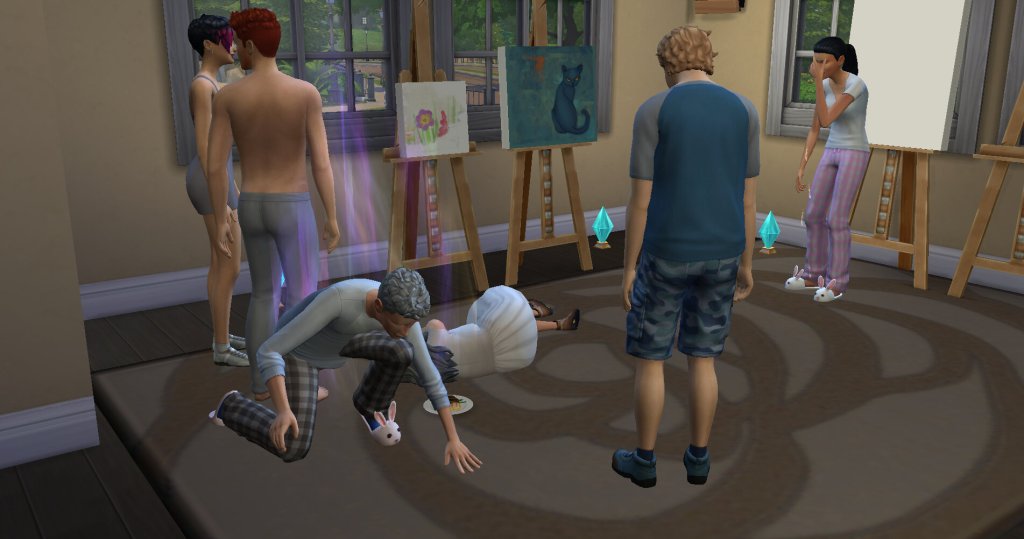 I quickly sent Eva out of the house and when I looked back Bronson was putting down his plate and joining his sister!  Why does this game have to be so predictable?  If they’re the same age do they have to die at the same time?

I managed to get Kelsi out of there and Hayden had to pee really bad but would start going for the toilet like I told him and then would return to witness death again.  I feel bad not letting them all mourn but the moodlet is terrible. Nothing close to as bad as Sims 2 and 3 but still.

While this is all going on at home Eva is fishing with hubby… in her pjs.  Can ya tell I was in a hurry to get her out of the house?  Seriously, I don’t think I could have handled another 2 day streak of sad paintings!  Especially when I’m trying to decorate the house with them. 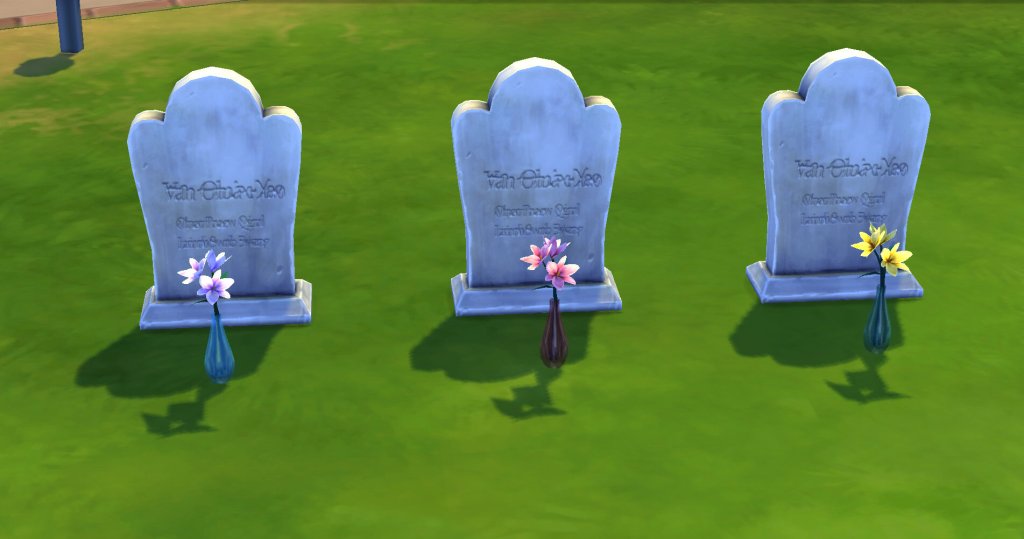 Kellie and Bronson’s graves join Ace’s in the back corner of the lot.

Grim stays for a bit to watch Sims of the Dead on the big screen.

*sigh* She was helping Trent tend the garden and cancelled it out to go mourn.  And so it begins.

Speaking of mourning.  It took a lot of work to get his focused mood to overcome this…

So that they could do this.

Luckily she got pregnant on the first try because by then the sad was already overshadowing all the other moodlets.

This chapter is 3 days.  Kelsi has 4 days before she ages to adult.

House value check: It hasn’t changed much since the last chapter.  I’m waiting for after the bills to do anything more really. Here it is anyway: $271,232 with $93,710 in reserve.

As to the mansion baron aspiration, I counted and I have more than enough windows, half of the columns and not even close to enough paintings.  I plan to use someone’s trick I saw of putting columns in the basement so it’s like their holding it up and I’m getting less picky about which paintings I keep.  At first, I was only keeping the masterpieces that I liked. Now if I like it I keep it regardless of it’s value.