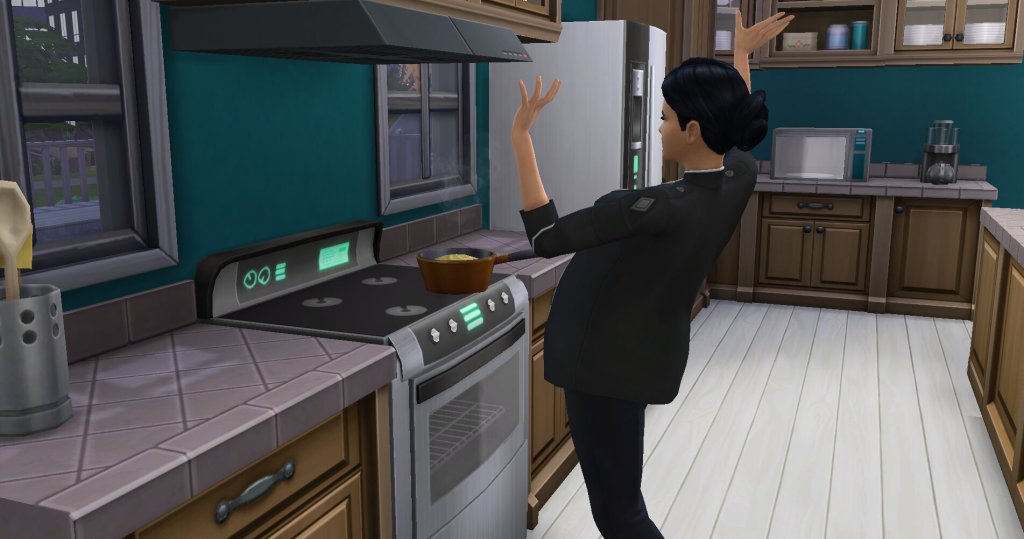 Remember I said that I hired a caterer?  She was cooking while they were sleeping and I was watching her when she started doing this and I realized it’s the same insane one from house 006 when I was trying to find a wife for Trent! I ended up giving up on the catering thing.  I hired her twice and both times she made one meal for 4, talked to herself and would leave a second meal uncooked before she left.  It just wasn’t worth it so I started making Thaddeus cook.

First whim of the day.  Be friendly with Kiley.  He gets lots of these.  Be friendly, get to know, ect.  I didn’t take pics of them because I figured it’d be boring.  But that decision meant there are a lot of days in this chapter! 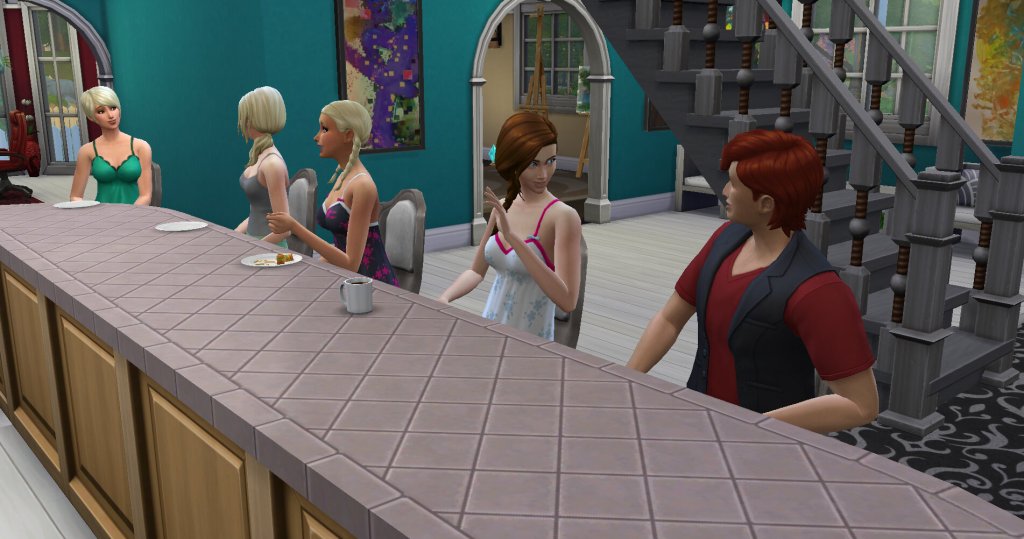 Then he got a whim to flirt with Ellie… while Jamie is sitting next to her.  I did it and expected a reaction from Jamie but got none.  Guess their relationship isn’t high enough.

He wanted to cloudgaze with Kiley.  I never let them cloudgaze too long because it’s a seriously over-powered way to increase relationships very quickly.  Which is why I use it so much to move sims into houses.

I was trying to think of something they could do together while I waited for the 2pm outing.

They went to the park because Thad was getting hungry and none of the other lots have food.  It’s time for our outing with Precious and Vicky! 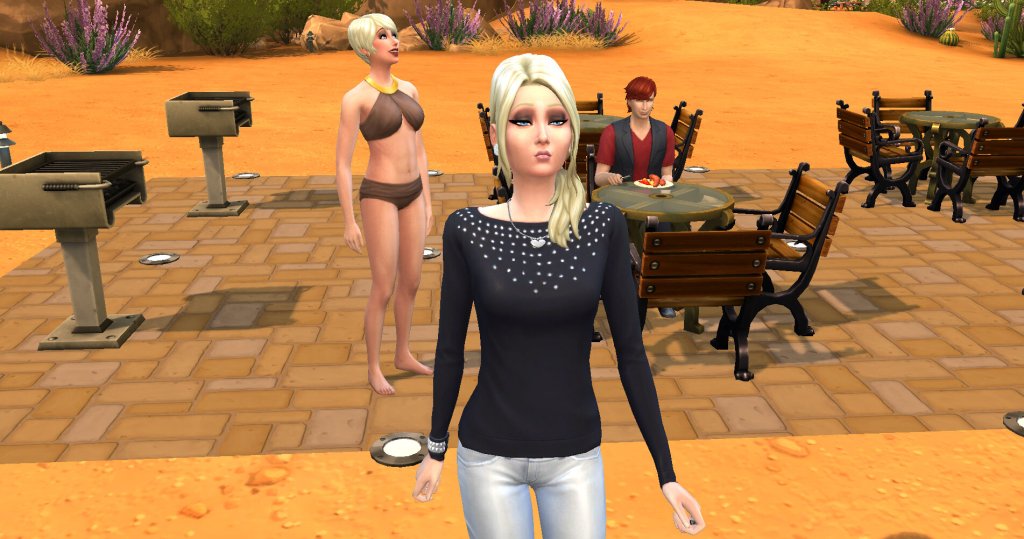 I had them go together to the grill area where he cooked and sat down to eat.  When Precious started walking away I figured this outing was going to go nowhere.

Then he got the whim to be friendly with one of them and took his food to the pool where they were.  They were all in the conversation and talked like this for most of the outing.

When it was almost time to leave he got a whim to cloudgaze with Vicky.

I remembered after I sent them home about the rose.

Precious gets a rose and so she now has a pink bar.

Immediately after giving her the rose he got a whim to flirt with Kiley.

Then Precious left the room and Jamie came in and autonomously flirted with him for a bit.  Next thing I knew it was 11pm.

I really thought that outing had given Vicky a chance but with no romantic relationship she had the lowest score.

Bye Vicky!  At least we’ll still see these girls that leave out and about in the neighborhood.

Morning girls!  Time to fish.  I had them all out here waiting for 8am.

Ellie catches the first fish almost as soon as they start fishing!  This gave her an advantage.  She won with 2 fish. Precious and Jamie both caught 1 and Kiley didn’t catch any. 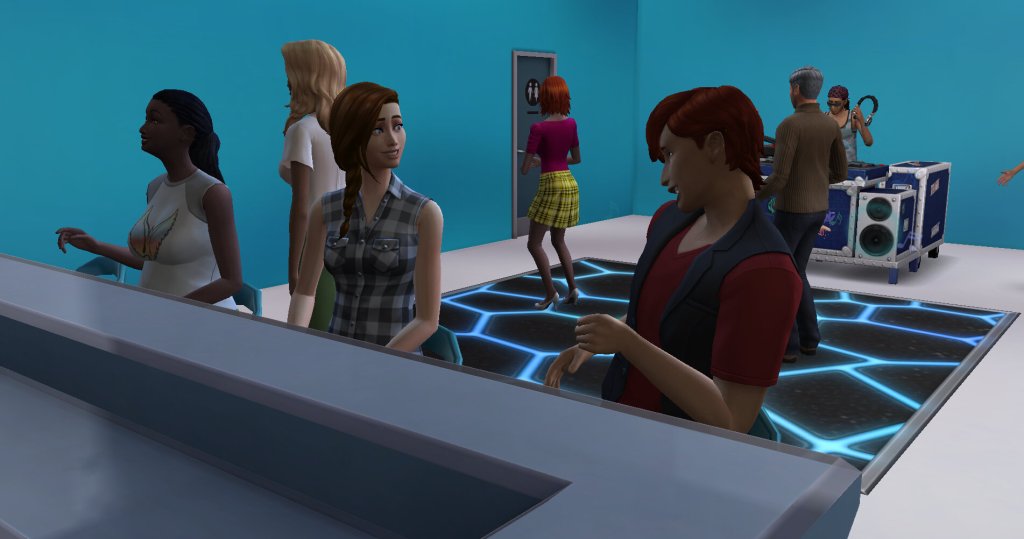 I elected to have the date in the lounge.  Things were going good… at first.

Back to the date.  So I was trying to do the “get both sims flirty” part (after just getting them both playful, ugh) when he said something, and I don’t know what because I had a bunch of stuff qued, that upset her.

Oopsie!  With every interaction, their relationship went down.

When Thad started to head to a couch to nap I decided to end the date.  Then I remembered the rose.  I was sure after the way things had been going that she wouldn’t accept it.  But she did.  I was really surprised.

No pics from before the outing.  Nothing exciting happened.  He had a few whims to be friendly or get to know but I mainly just kept the camera on him, let him interact with them autonomously and clicked through his whims.  This woohoo one keeps popping up over and over again!  I don’t think their relationship is even high enough!  About halfway through the outing I quit clicking through whims obsessively like I’ve been doing since the start of this challenge because they are seriously annoying me!  Since then I will occasionally x out whatever’s there and if something doable pops up I do it but other than that I’m just sick of it.

I checked before they left and everyone’s needs were fine so I decided to take them to the Bluffs.  I love that place. 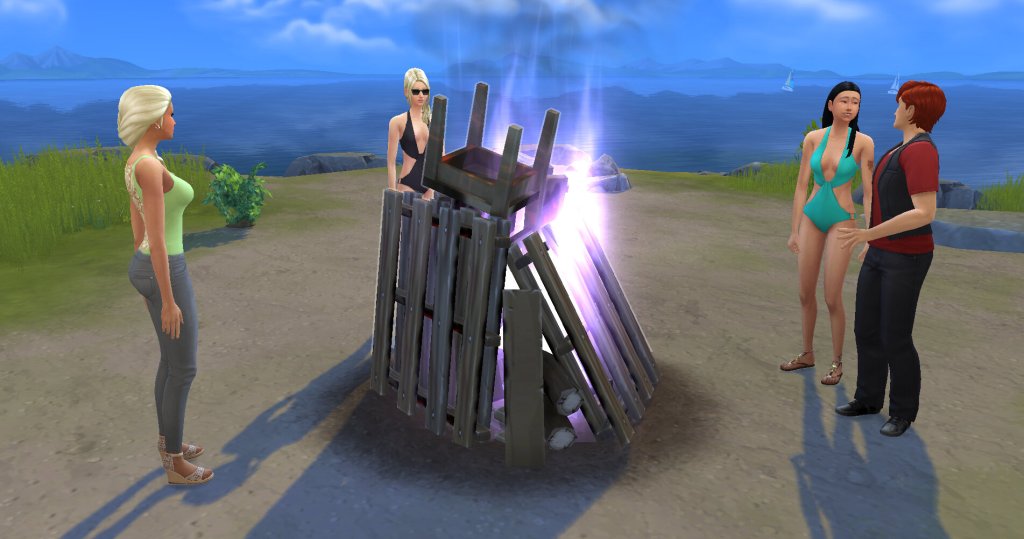 At first, I had them “hang out” together but realized that all they do is warm themselves and not interact so that was pointless.  I had him do the same social with each of them to get things going. 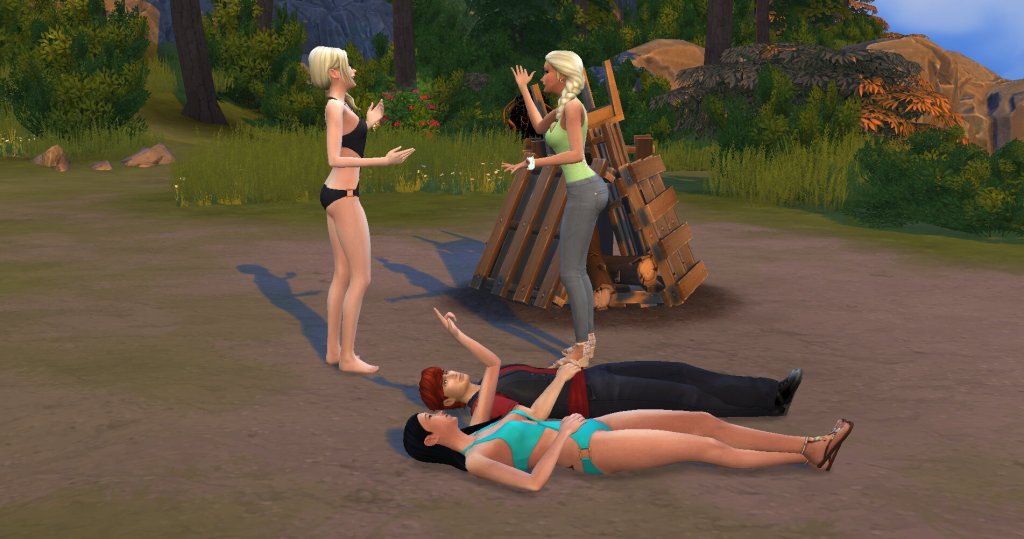 Another outing that ends in cloudgazing.  Seriously, the only doable whim in the whole 5 hours!

Awe isn’t this cozy?  Of course, since Ellie wasn’t with them for the outing her needs were fine so she was off doing something else.

I really wasn’t surprised.  He never got another Ellie whim after the disaster date and they never autonomously interacted again on day 5 before or after the outing.

Bye Ellie!  See ya around.

I never expected to be doing several days in one chapter prior to starting this but like I said in the post, not much happens and it seems silly to take 20 pictures of him just talking to whoever.  I’m really surprised that nothing more exciting has happened yet.  Tomorrow starts the scored dates so things should escalate pretty quickly after that.