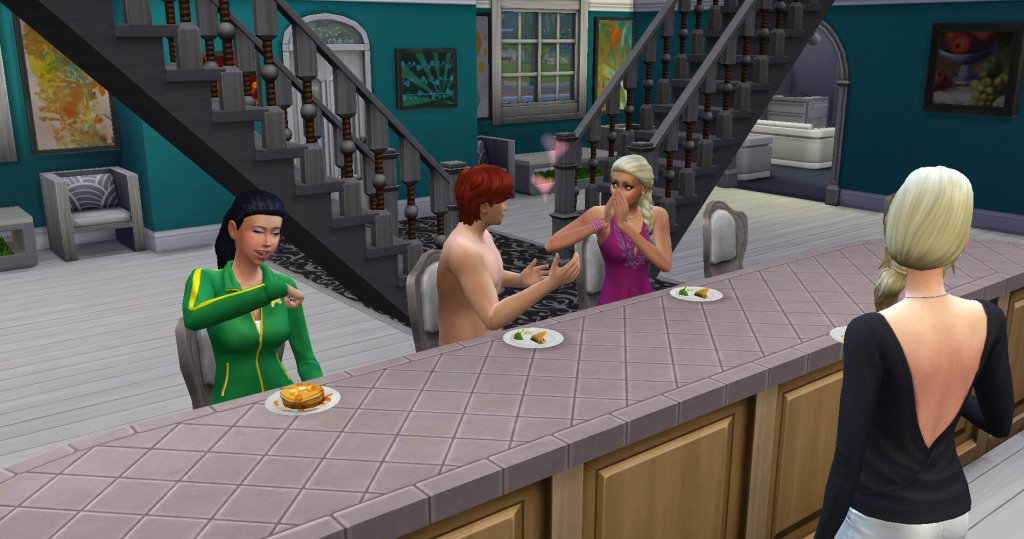 Day 8 started with Thad autonomously serenading Jamie over breakfast.  I waited for an explosion from one of the other girls since they were all in a conversation together but got none. 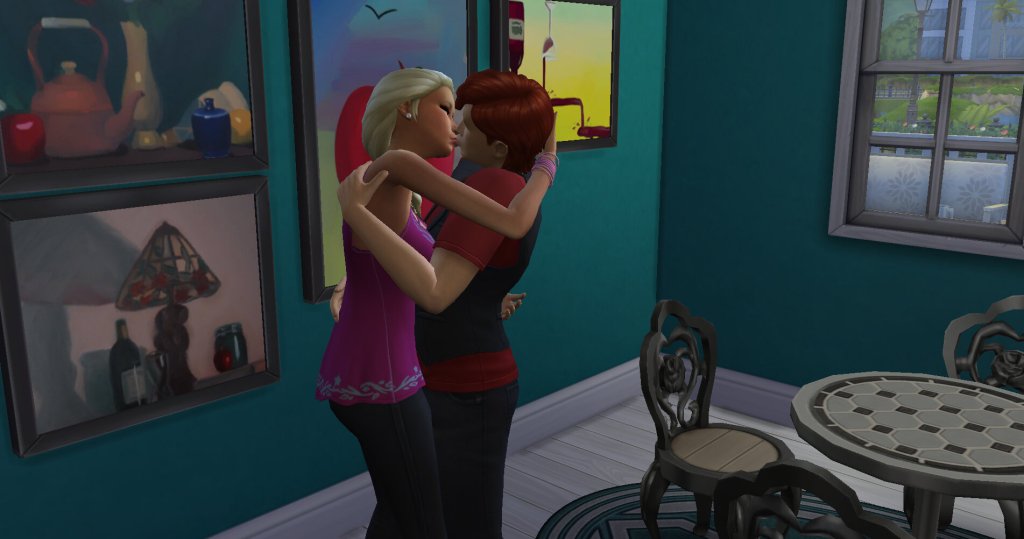 A little bit later Jamie came up to him and kissed him.  I was a little shocked.  They haven’t had a first kiss!  I keep waiting for the “first kiss with…” whim and he’s never gotten one.

Hanging out together and telling jokes.  Every time he started going to do something (look at fish, play computer, ect) I would cancel it so he’d interact with them if at all possible.  I occasionally clicked through his whims but this guy has some seriously boring whims other than wanting to woohoo with every girl in the house. 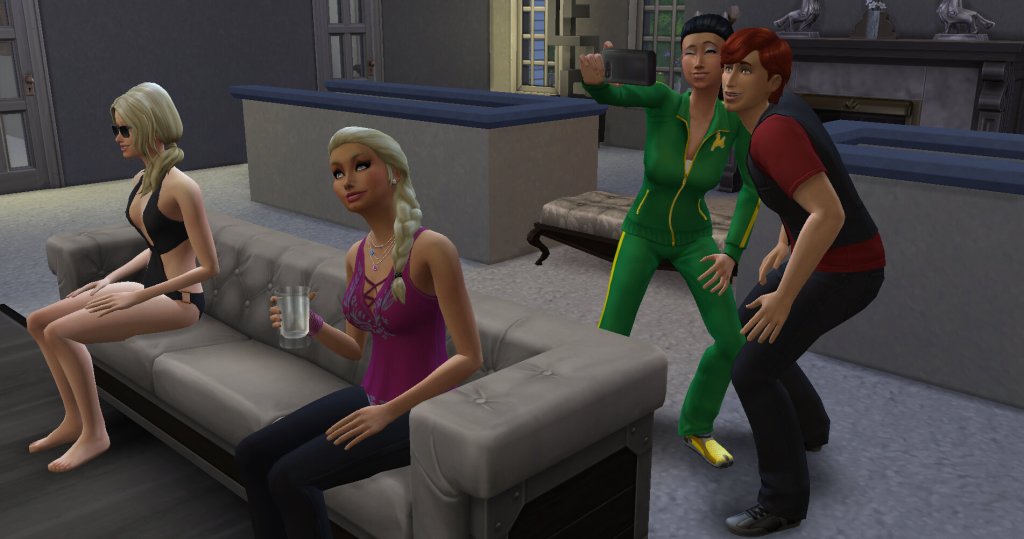 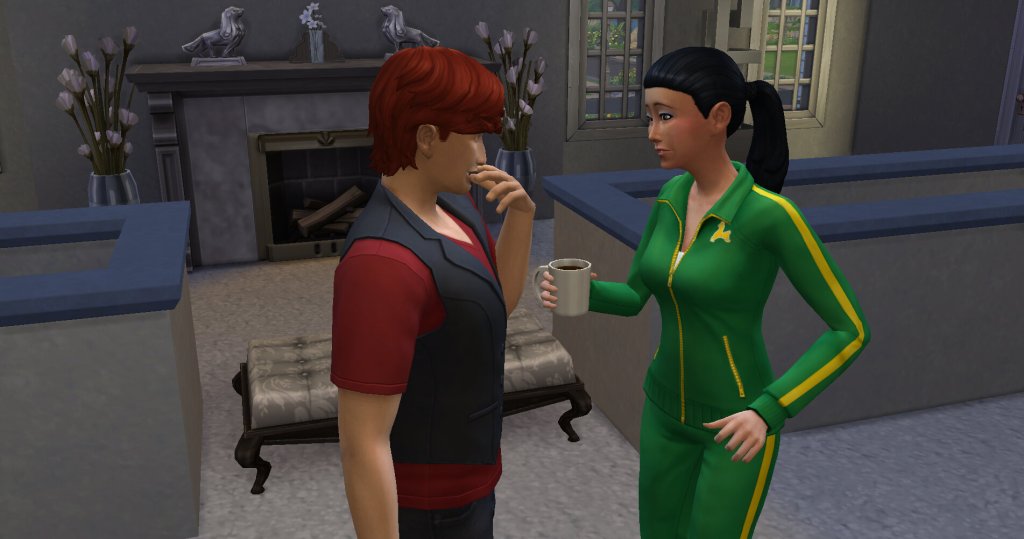 Just as Jamie went downstairs Kiley started flirting with him. 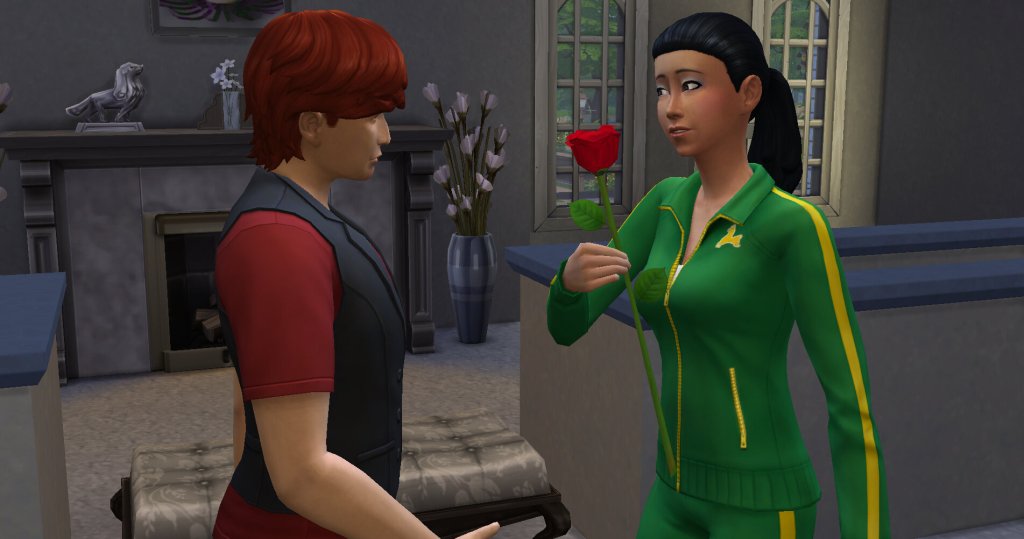 Then he gave her a rose.  Things are definitely getting more interesting!

Then he held her hands.  I took the pic from this angle to show that Precious was sitting right there the whole time watching that darned Tween channel. 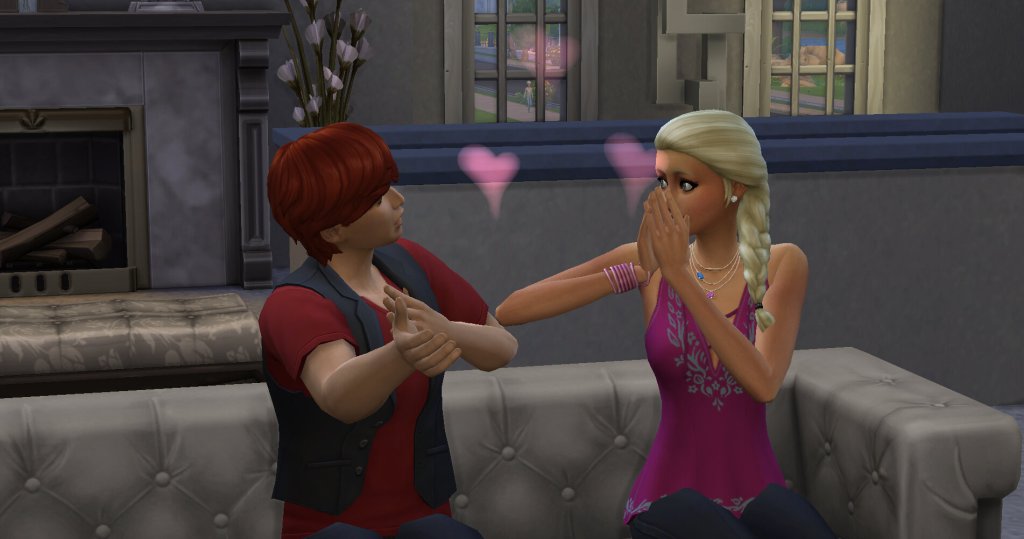 Kiley went downstairs about the time that Jamie came back up.  He serenaded her again.  I’m getting more and more worried about what will happen when this happens with both in the room.

Oh well.  Not anything to worry about now, it’s date time!  Precious is the only one left.  If you’ll recall, on the first day of the solo dates she had caught him flirting with Jamie or vice versa and freaked out so I ended up leaving her for last.

I got a bit distracted by ghosts of drifters past in the lounge.  This is Keith Rover, son of Brock Rover from house 001.

When I noticed that Precious didn’t follow him into the bar area I sent him over to talk to her.  This entryway is not meant for screenshots!  Anyway, things were fine, once again like with Ellie I have no idea what he said but it set her off!

They both got embarrassed.

I tried to get them to talk… just friendly interactions even but they were both miserable.  The only date task left was to get them flirty.  Only he was flirty and that was before he got embarrassed.

It was pretty late anyway so I ended the date.  Then I remembered the rose.  It’s the first time any of the girls rejected a rose.  Even Ellie accepted it at the end of the disaster date.  This was actually worse than the date with Ellie because it started off so well.

I’m sure you’re not surprised to see the results of the end of day 8 and the elimination.

Bye Precious!  We’ll see you around.

-Day 9
-2pm schedule a house party
-At the end of the party, the sim with lowest relationship score is evicted
-Offer final contestant a rose
-Profess undying love
-Propose to contestant
-Stop game play and proceed to House 007 Part 2

The final day began with an autonomous peck on the cheek for Jamie. 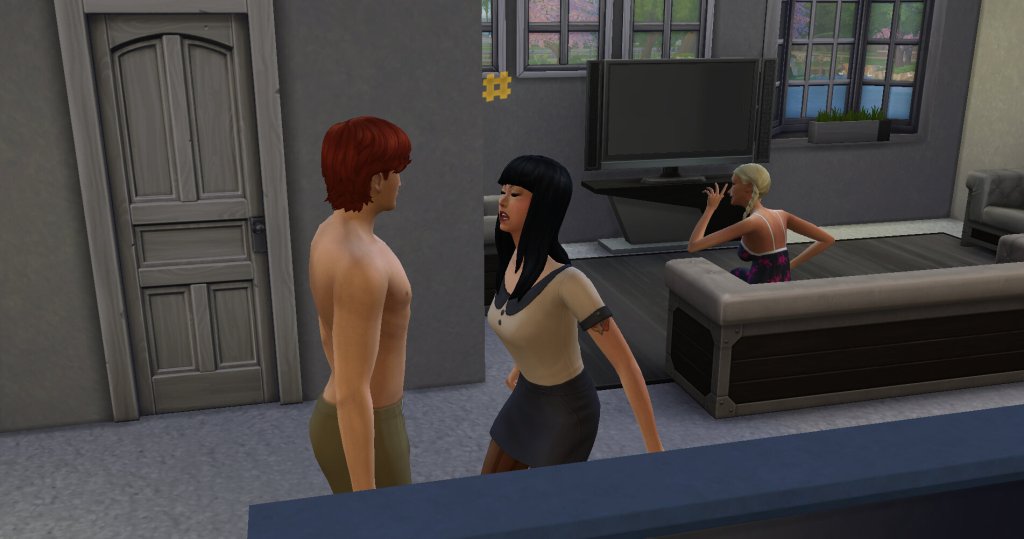 Then it happened.  As you can see he was talking to Kiley when Jamie flirted with him from the couch.  Kiley lost it!

Nothing was really happening while I waited for 2pm for the party.  The girls were both on the computers so I had him go ask both of them about their day.

Kiley got up and cried in bed.

It’s party time!  This time, he changed into his party clothes.

I decided to do a DJ to make things more interesting.  I made a group and had them all dance together.  The party was a bit difficult because some of the tasks were for more than 3 sims. 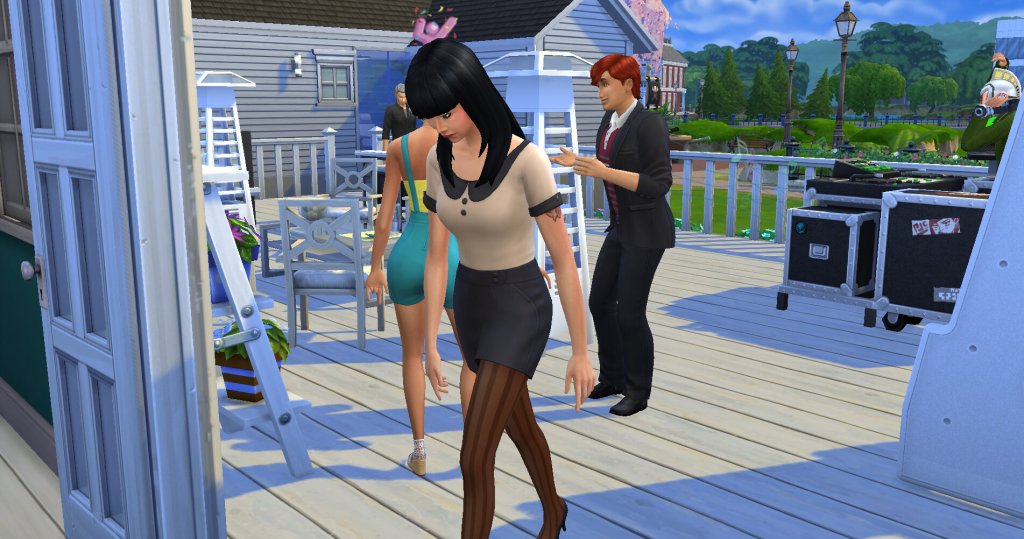 Mom gets her groove on to the DJ performance instead of cooking.

The mixoligist made like 10 drinks.  Luckily they all sold with the bar.

Eating cake together and waiting for the end of the party.  I was a bit confused that it got a silver since I couldn’t complete a lot of the tasks. 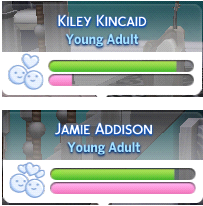 The winner is pretty clear but I wanted to show you anyway.

Kiley was evicted.  I have no idea why I didn’t take a shot of her leaving like I did everyone else?  I guess I was excited to move on?  It’s time to wrap up this thing… and Jamie has to use the bathroom.

While Jamie was in the bathroom I had Thad clean up the cake plates and when he was done I looked and she was in bed already!  Geeze she moves fast!  I didn’t realize it until I put the walls up but one of the flirty paintings that Eva made is on the wall.  I loved it and as you’ll see I centered the pics around that painting.  First, a rose. 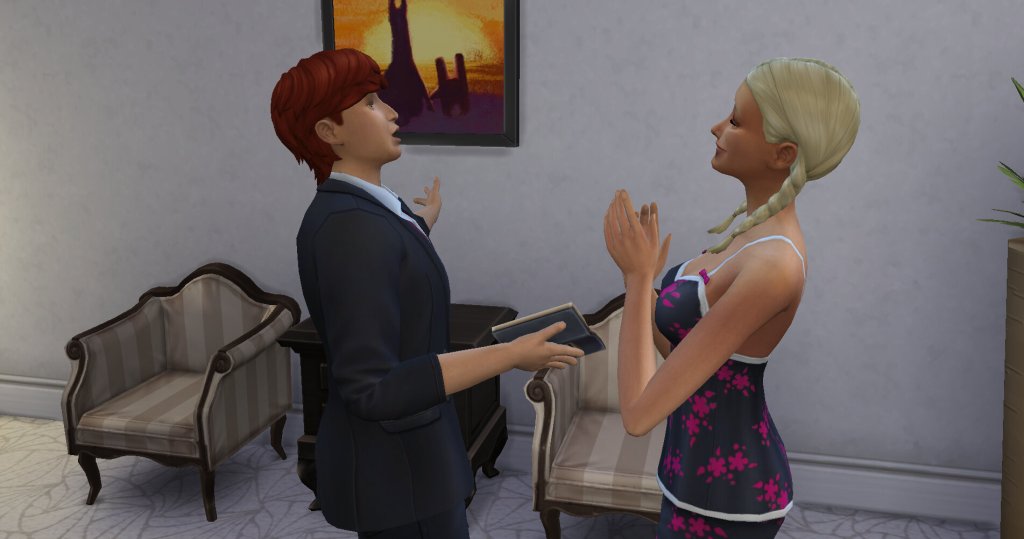 Then, he professes his undying love.

Then, he proposes.  I thought about having them have their first kiss before proposing but I thought it was funny that they haven’t kissed yet so I didn’t.

Of course, she said yes!

In addition to putting the house back in order before they left this needs taking care of.  Sorry guys but I’m not having girls running around the neighborhood with romantic relationships with him.  What if they come over to the house for a visit and flirt with him or something?

Luckily, the MC Command Center mod has a fix for that.  As you can see I made them forget their romantic relationships.  Viola!  Problem solved.

To be continued in house 007 part 2!  Thanks for reading.  Hope you enjoyed the rollercoaster ride!  It was a lot of fun.

Favorite girl didn’t win?  Don’t worry, in chapter 007.2.2 all of the girls get a new beginning so stay tuned!