Since Lulu lives in an apartment she decided to go down and socialize in her pjs. 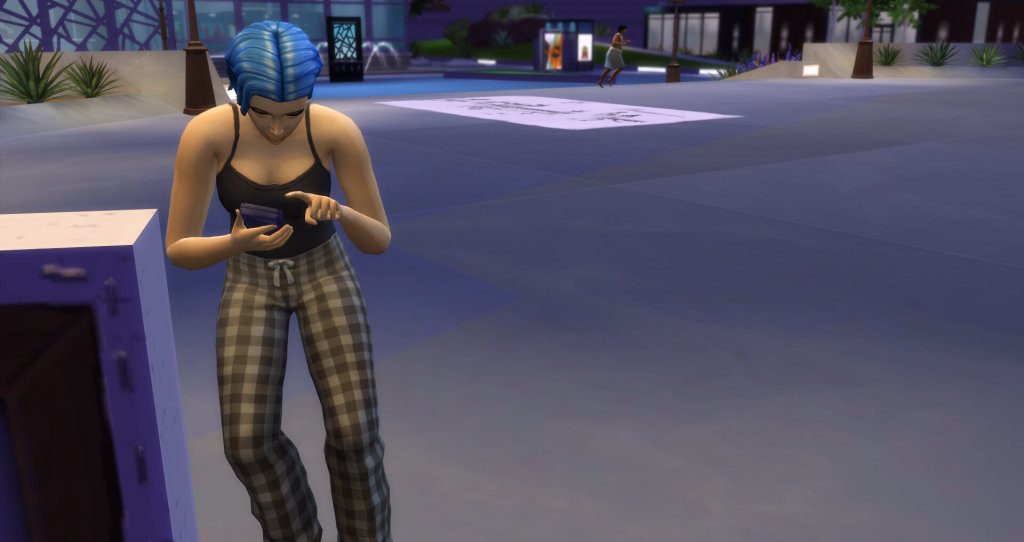 It could be worse, she could have been wearing a towel… look closely at the background.

I’m assuming this must be part of City Living because I’ve never seen anything like it.  I might have missed it if I didn’t happen to pause the game when I got a phone call.  So funny!  I laughed and laughed while on the phone.

Lulu did manage to get herself dressed when invited to a party and she stayed out most of the night until it was light outside.

I wondered how the apartment key thing worked.  Apparently, everyone who has a key shows up.  I wonder if there’s a limit because she keeps getting the whim!

One annoying thing is that every time they come to visit her they drink like three glasses of water each!  The conversation must have been boring because Lulu took a nap… okay, it was probably staying up all night to party.

Once Lulu woke from her nap she had to finish some of her at-home work tasks including working on a mural. 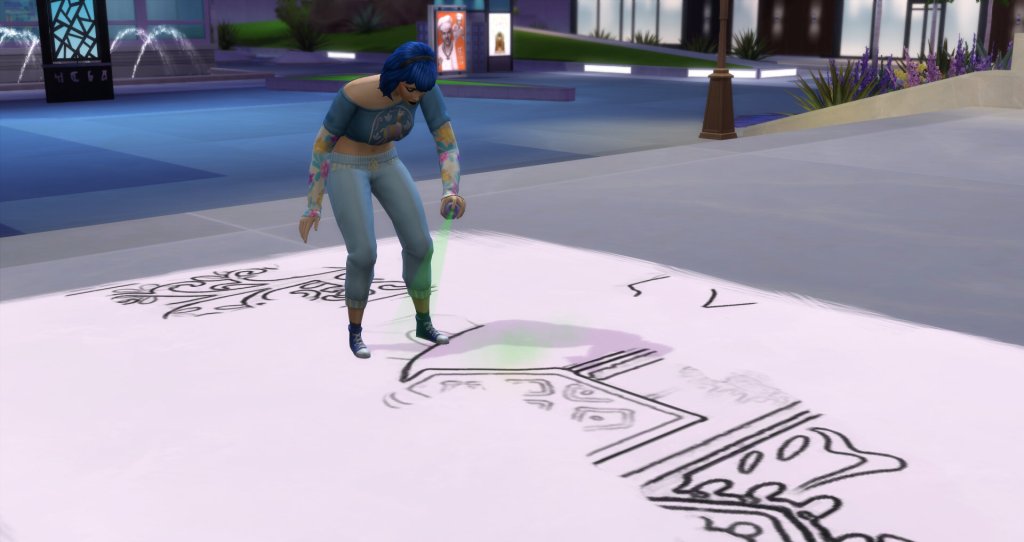 It was really fun to watch her but she was tired so once her two hours were finished I sent her upstairs to bed. 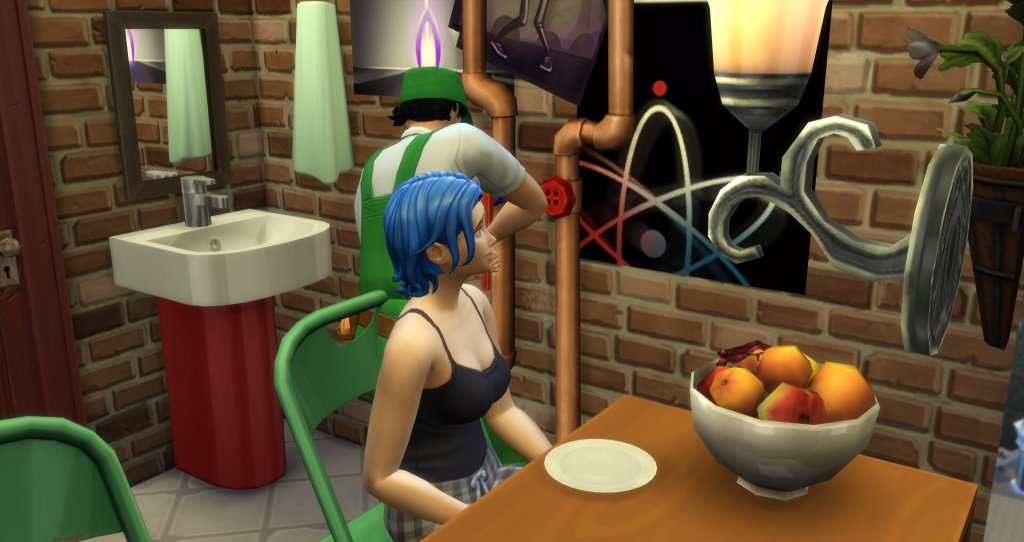 The electric box was sparking and the pipes were leaking.  She had a whim to call the apartment manager and I thought thank goodness all of this will be taken care of… nope.  He fixed the pipes, tried to fix the electric and then sat down and did nothing while a mouse ran around on the floor.  This apartment isn’t working out very well and I’m thinking of moving her because I can’t do anything about it unless she has a whim and she isn’t getting any.

Ugh those glasses… and a mouse! 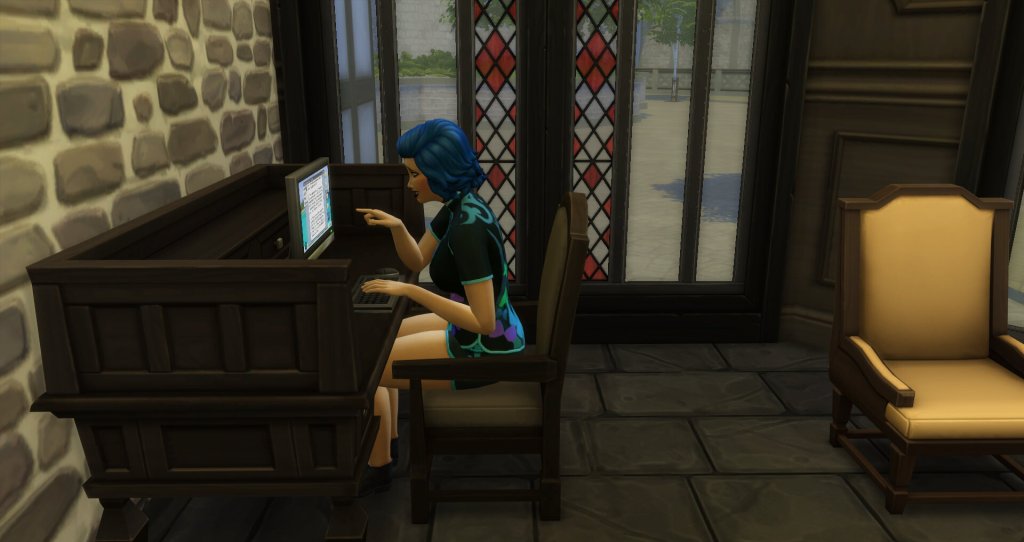 Working from “home” at the library since her electricity keeps flickering.

Watching tv at the pub for work also because of the electric.  See why she needs to move? 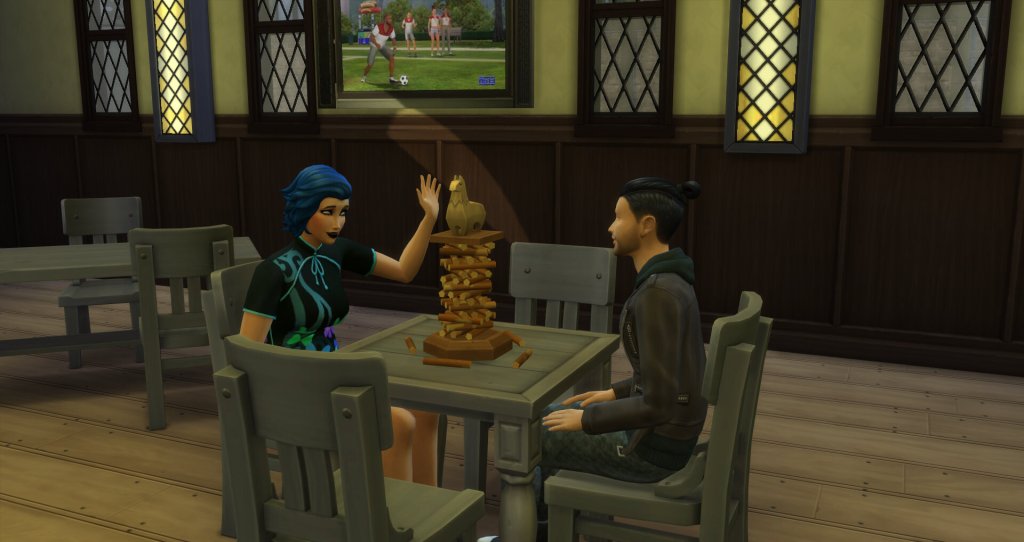 I thought this sim Akira was cute so I used her one social interaction to introduce them.  I think this may be the first time I’ve remembered that I can do that.

Yet again, she wants to give away a key.  She had been hanging out with this sim Sara most of the night so she gave it to her.

The next day she still had the whims from the pub the night before to play darts and watch foosball so she went to another pub.

Then she got invited to the Spice Festival by Marcus.  I noticed that she is gaining a bit of weight.  Must be all of that fruitcake she eats.

The food is hot there.  It was neat, right before I paused to take this pic both Lucas and Akira did the mouth flames. (At least I think that was Akira sitting there?) 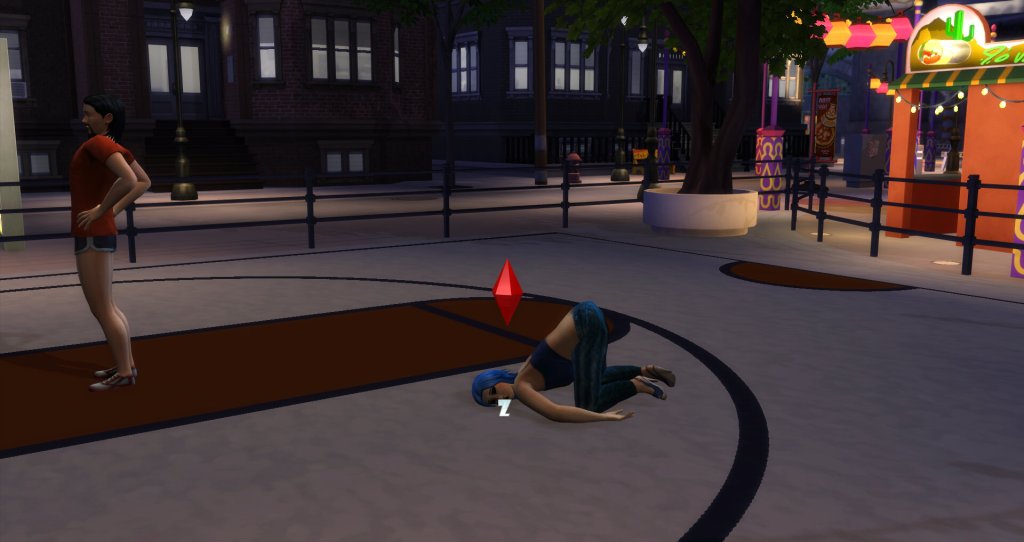 She started playing basketball with this dude after eating and passed out.  She hasn’t been sleeping much due to the mice and all.

Everyone shows up as Lulu leaves for work (I decided not to work from home for once) and get tense because of all the problems in the apartment.

Lulu was so tense and wanted a steam so I sent her and the girls to the spa… only to discover no steam room in this one!  So I ripped out some decor and stuck one in there.

I’ve liked Miko since I first saw her on someone’s YouTube let’s play.  I tried to get them to be friends on the first day playing Lulu but it didn’t happen.  Finally she can give away yet another key.  I’m thinking I need to just start ignoring that whim.

Eh yeah, well.  Ya know they were in towels and stuff so I used my one social to flirt just for fun.  Who knows what will happen.  I am playing on normal and need an heir at some point.  Gotta keep her options open!