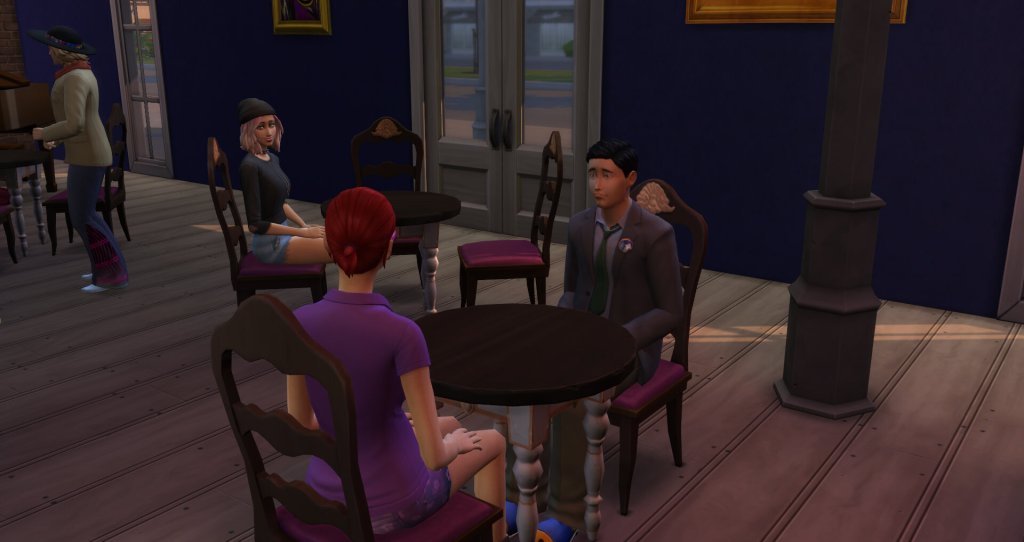 Okay so I know his mom just died and he’s mourning right now but he’s getting up in age and I really want him settled down at some point soon.  Before I can do that I want him to complete Serial Romantic.  All he needed were 2 dates and 2 girlfriends so he invited Ingrid out on a date.  As you can see Trixey showed up soon after they got there.

He only had like two romantic interactions and when he tried one Trixey jumped up and freaked out.  It doesn’t help she’s a jealous sim. 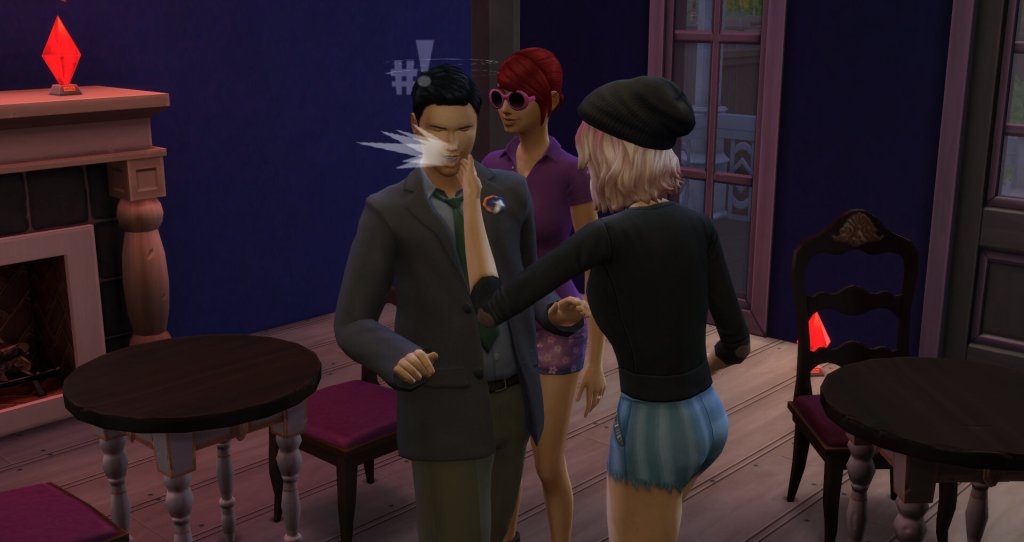 I attempted to get him flirty so that he could get gold on the date by placing flirty lamps and for a few minutes he was.  Of course, Trixey slapped him. 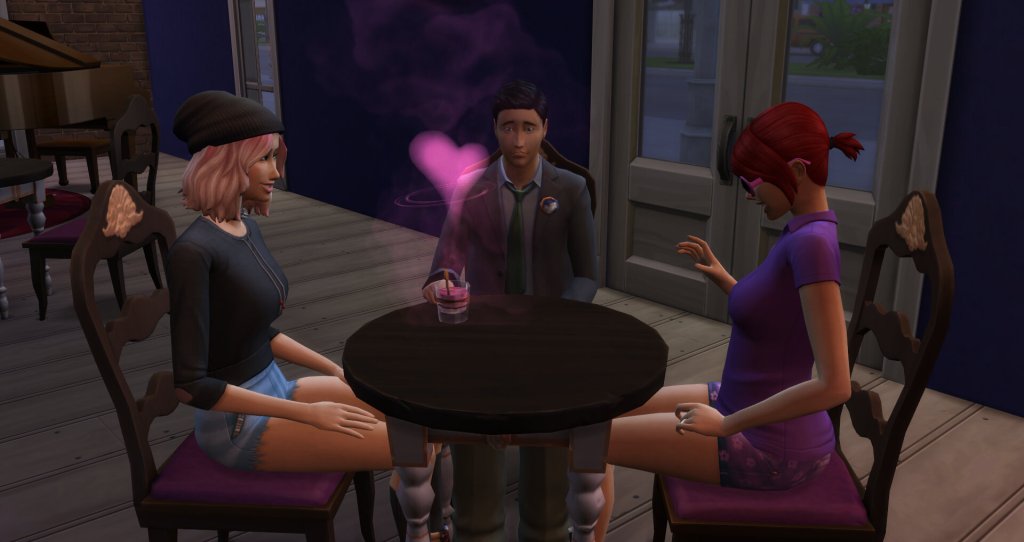 I’m not sure who’s the glutton for punishment… Trixey for sticking around and watching their date or Tate for trying to get flirty in any way possible and failing.  I ended up stopping the date and sending him home to blog about his feelings and call the sadness hotline.

He sent a sad text to Blake and he invited him over.  Apparently he lives with Kate.  I don’t think they’re brother and sister though because they have different last names. 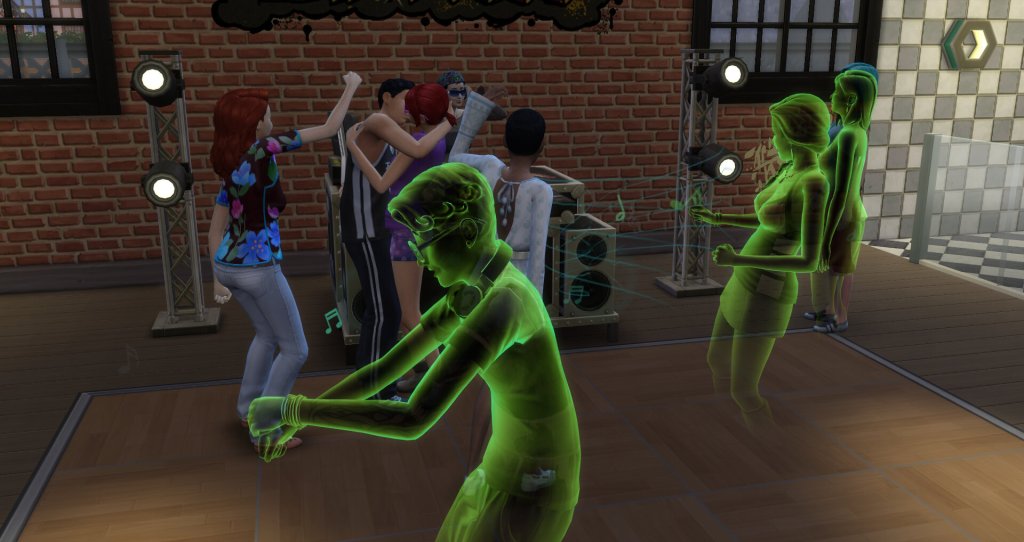 Finally, Tate gets a proper date with Ingrid.  Soon after this Blake showed up and he had to rush through the date steps upstairs where he couldn’t see them.

Last was Kate.  It was a fairly quick date and he finally completed the Serial Romantic aspiration and got the Player trait! 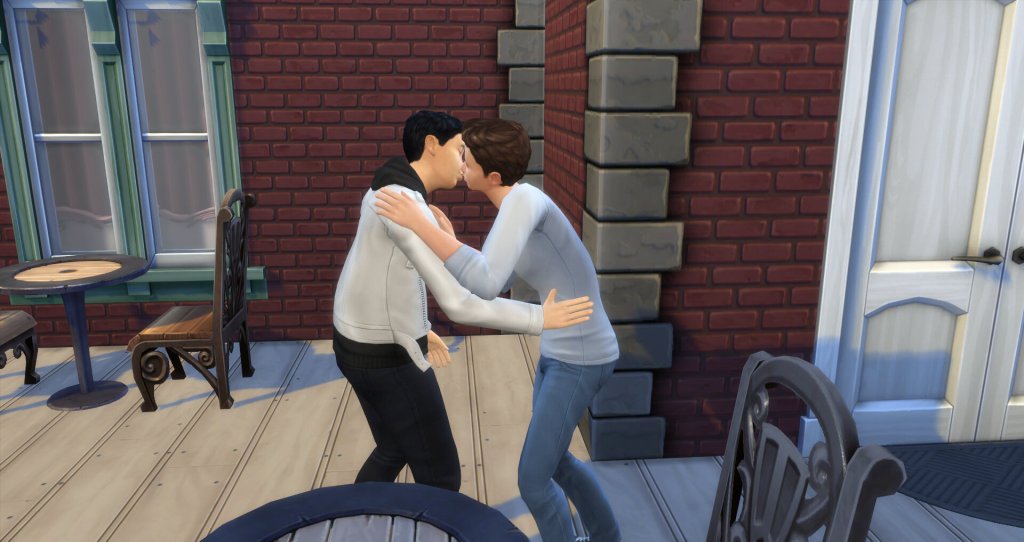 I was vying for Blake near the end of this whole charade so when he wanted to go on yet another date he invited Blake. 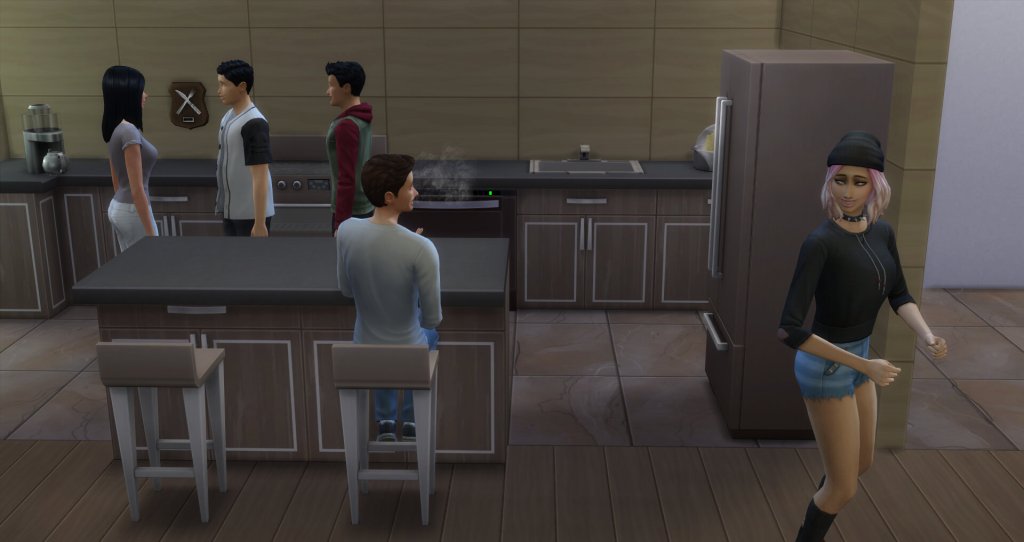 For once I don’t have to avoid the surprise pop-ins because he has the player trait.  Whew!

Blake invites him out on a date. I was so excited when he got the whim to get engaged to Blake.  Then when I hovered over propose it said he can’t marry a sim in his employ.  I looked it up and it seems like a new bug but nobody seems to know what’s causing it or how to fix it.  The only definite work around I found was moving him in, going into cas.fulleditmode and marrying them that way which is what I ended up doing.

They invited their friends to the mock wedding but they were all too occupied with the fireworks. 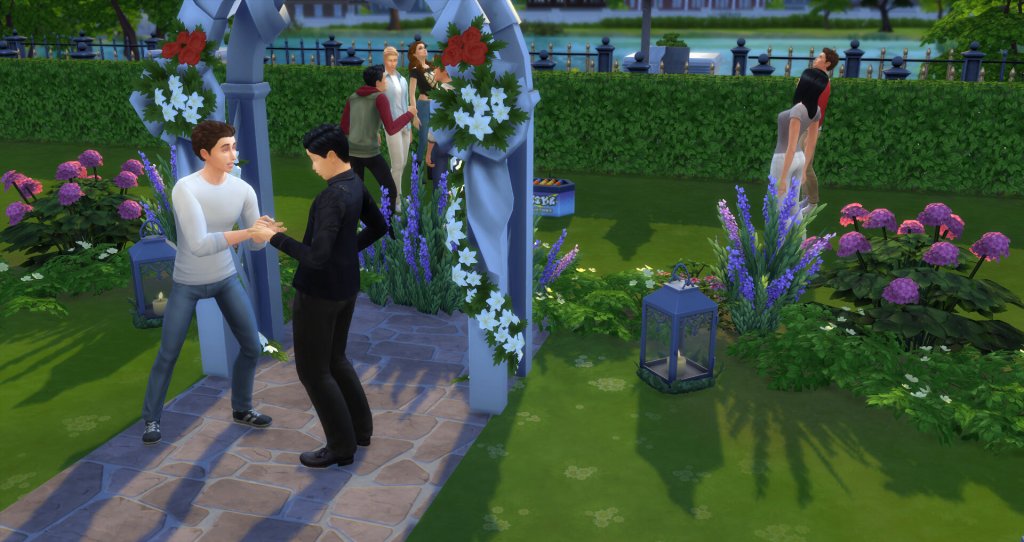 Technically it was renewing their vows or something. 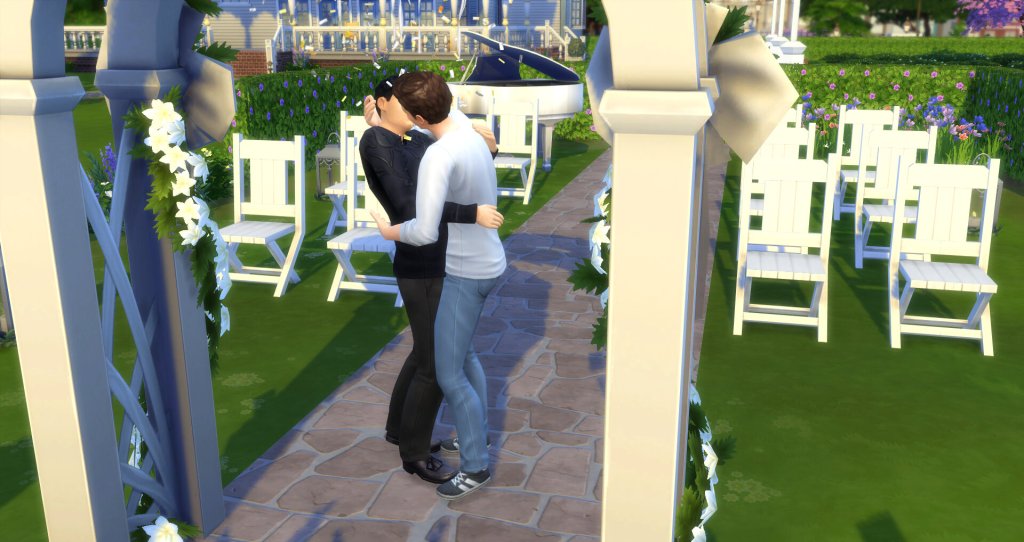 Either way I got my pictures. 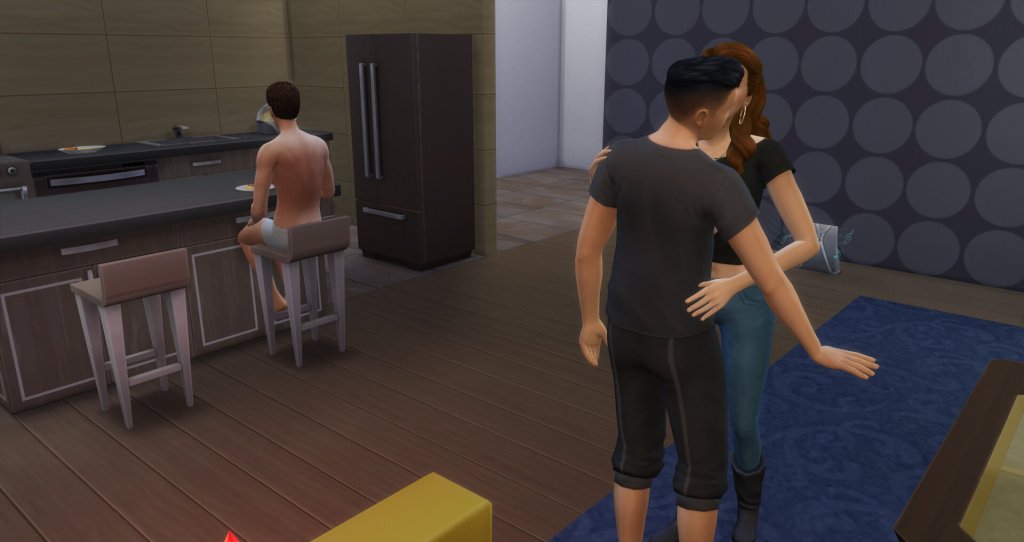 Okay so I didn’t really want to change it so that one of the guys could get pregnant and since Tate has a romantic relationship with several girls I figured that was the best option since they’d never get a baby whim.  There really should be an adoption whim.  So when he wanted to kiss someone or something like that he invited Pixey over. Gotta love the Player trait.

This was several days later.  Many dates and never once did he get a woohoo whim for Pixey.  Then one day she invited him to a party at the bluffs and he got the whim.  Thank goodness!  He only had 4 days before aging to adult. 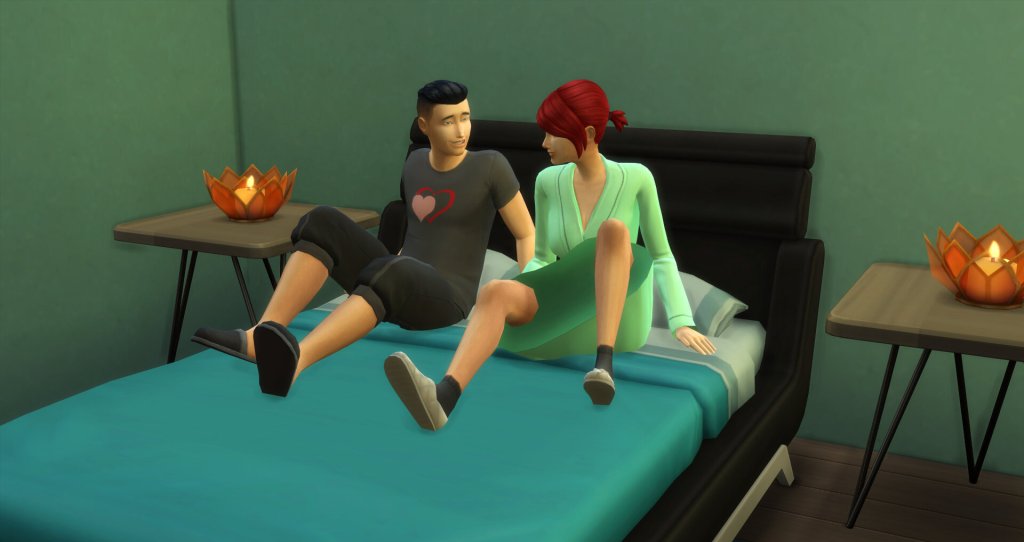 I decided to go with 2 kids this time.  (Hopefully nobody has twins!)  So when he had a date whim I remembered (duh!) that if they have a date at home there’s usually a woohoo goal.  Kinda cheaty but oh well I was a bit frustrated at this point.  So he woohoo’d with Ingrid because I like her red hair.

The guys are excited about the prospect of being dad’s and eagerly await the news from the girls.

Raj was a fairly quiet neighbor.  His son, Soren, on the other hand is not.

Tate had to go to the fashion district for work so he dragged Pixey and Ingrid along to check on their progress.  It was actually the opposite than I expected.  Ingrid was huge and Pixey wasn’t showing but kept acting like she was about to throw up so I’m sure she’s pregnant. 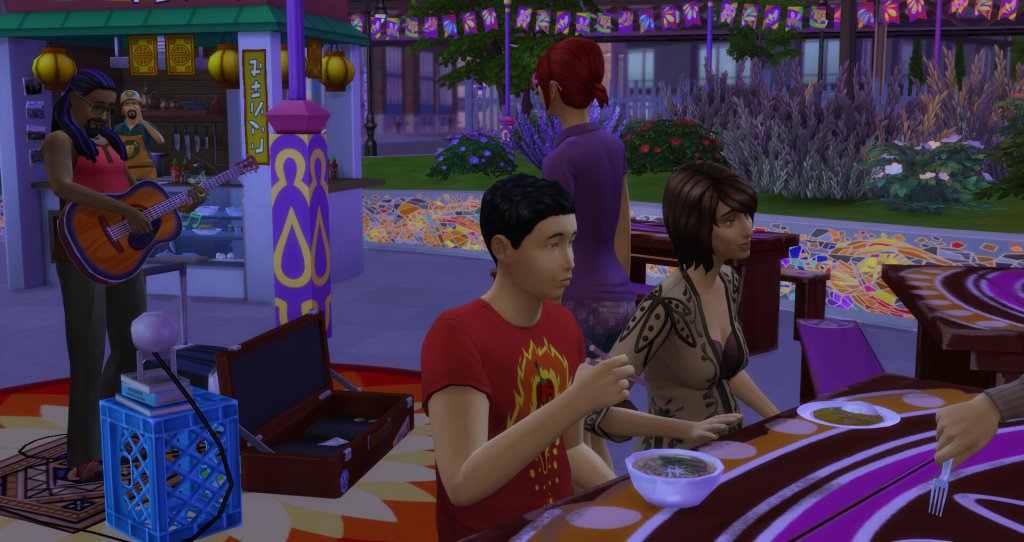 Later they all went to the Spice Festival with some other friends and Tate tried out chopsticks.  He got embarrassed about using them.  I suppose they take practice.

If you’re wondering why I didn’t just move the girls in so that they could have the babies there it’s against the rules to move anyone in unless whimmed which I’m pretty sure is impossible without marriage.  Sims 4 really needs more whims.