I stopped playing for the night after Pepper aged to teen so when I started back again in the morning I gave her a makeover and when I exited CAS she looked burnt.  Weird.

I re-arranged her room to fit in a desk because it looked so spartan with just a bed and side table.  She immediately went to the desk and did her homework.  She was up all night.

In the morning Febe aged to adult.  I still can’t get over how young they are.  I’m used to my main sim being an elder by this point. 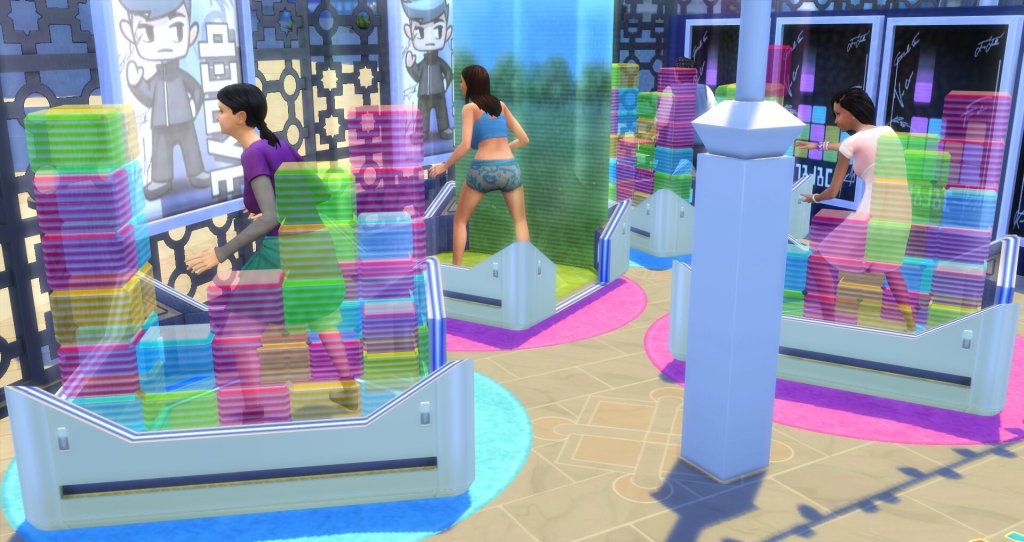 They all head to Geekcon and Febe failed the ultimate gaming test again.

She attempted the hackathon but Clara (in front of her) won.  I think she got a cash prize but I didn’t notice how much it was.

So funny!  It would be even better if the sim she’s spying on came and chewed her out like Sims 2. 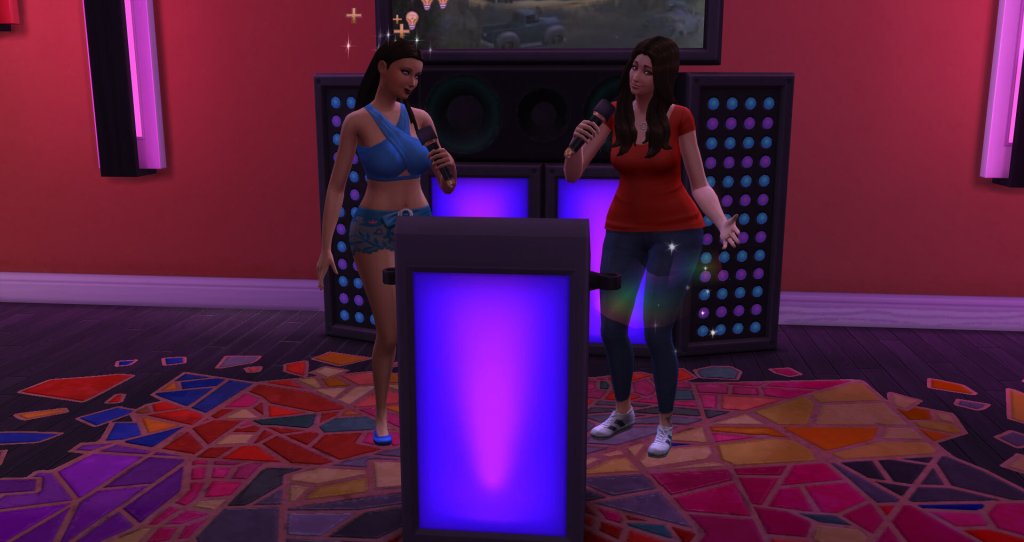 I still can’t figure out why sims in the same group can’t sing duets together.  I don’t know if it’s my mods or what? Instead she sings with Vihisha instead.

She fished a lot just to waste some time and in hopes of finding a cowberry.  No luck there. 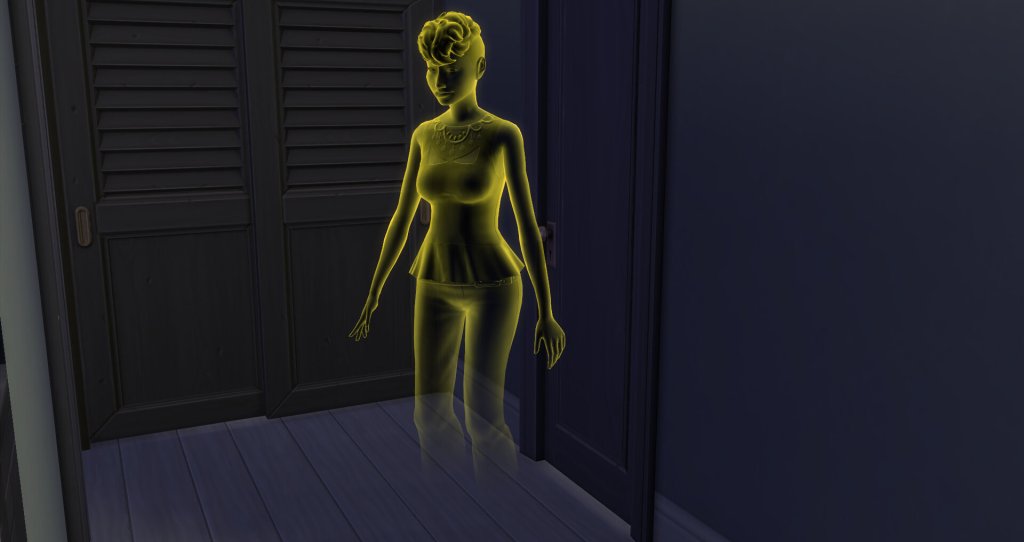 This ghost “walked” in on them woohoo’ing.

For some odd reason when she called for a repairman two showed up.  One fixed the shower in one bathroom and the other fixed the toilet in the other bathroom. 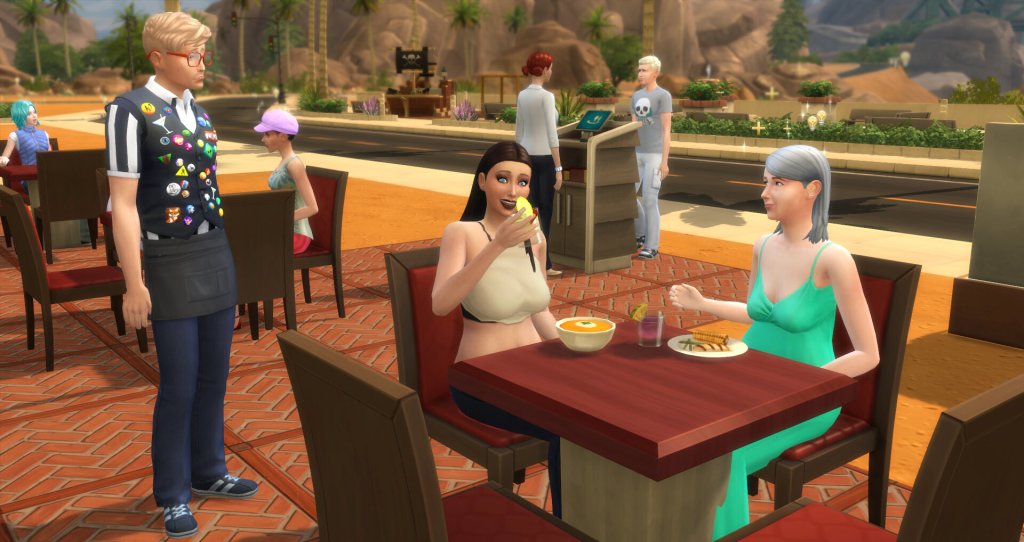 Out to lunch with Moira.  I think I might have broken a rule here but I can’t remember.  I think this is the challenge that all of the sims have to travel with the main sim everywhere?  I’ll have to re-check the rules!

This teen, Clara Regan, knocked on their door and Febe invited her in so she could meet Pepper.  Sadly she aged to YA like a day or two later.

I was trying to think of something else they could do on their Saturday and decided to take them to the Bluffs to swim.  Pepper got in and immediately got out and went to sleep.

Shockingly this guy is a teen too.  He isn’t even in her relationship panel so I have no clue what his name was.  They didn’t stay at the Romance Festival long since Pepper’s needs were low.

The whole family got sick.  It sucks that we can only give medicine to the playable sim.

On Sunday I was bored out of my mind.  I had already planned to have them try for a baby before Pepper moved out but then I got thinking that I’d like to see the kid before she leaves so I had them try.

I guess third time really is the charm.  She’s preggo!

After telling Stanley she sits Pepper down and share’s the big news with Pepper too.  She seemed happy.

Vihisha invited them to her house.  I forgot that she lived in my old house 001.  I can’t decide which one I like the most.  This was pretty much the first house I’d ever built. 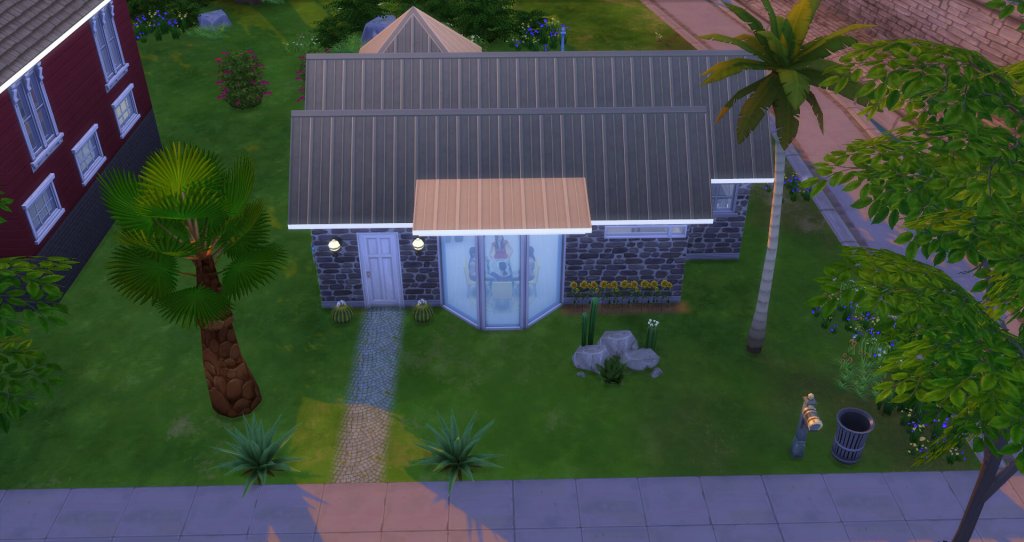 Here’s the outside.  When I placed it I had to change some of the landscaping because it was sand instead of grass. 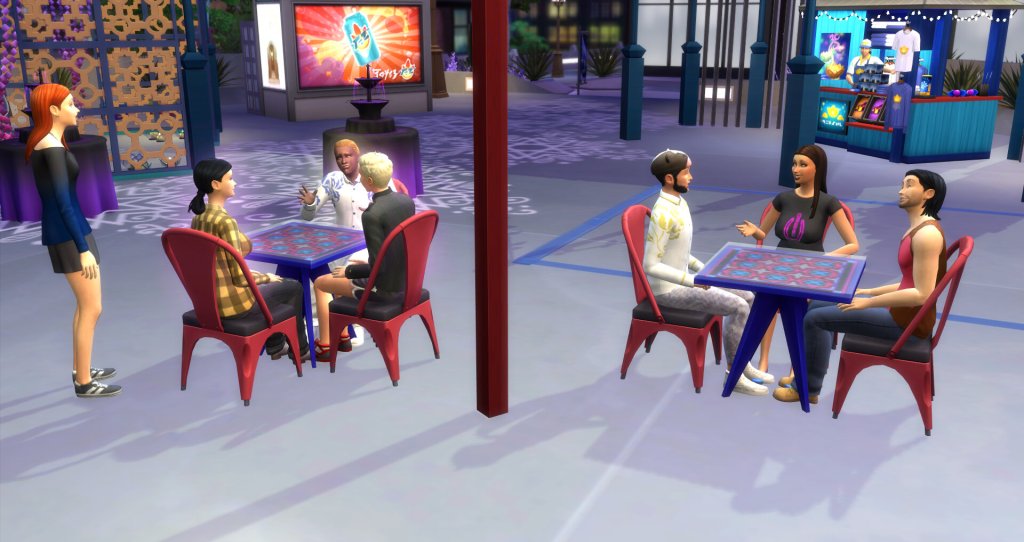 Then they went to the Humor and Hijinks Festival but didn’t stay long at this one either. 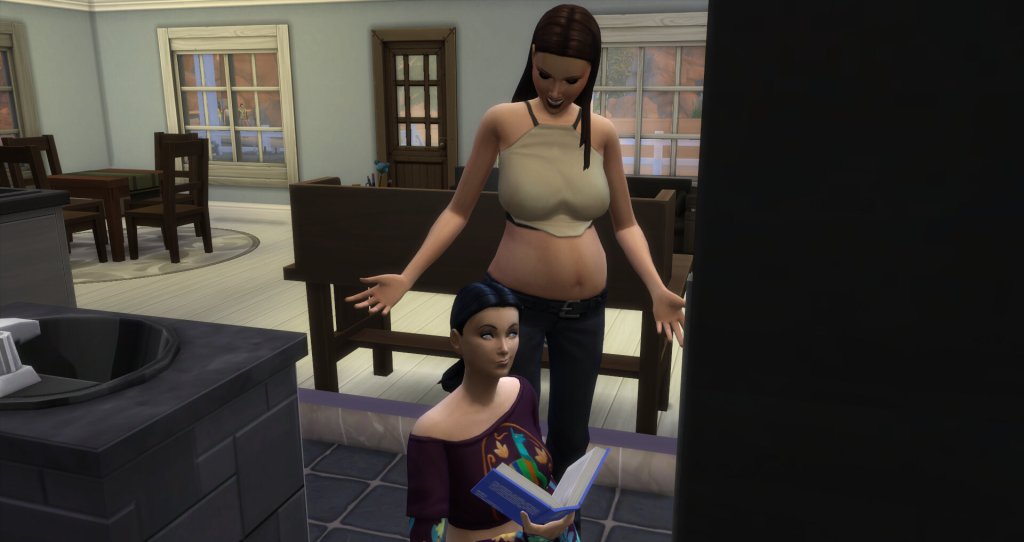 What’s up with sims doing their homework on the bathroom floor? 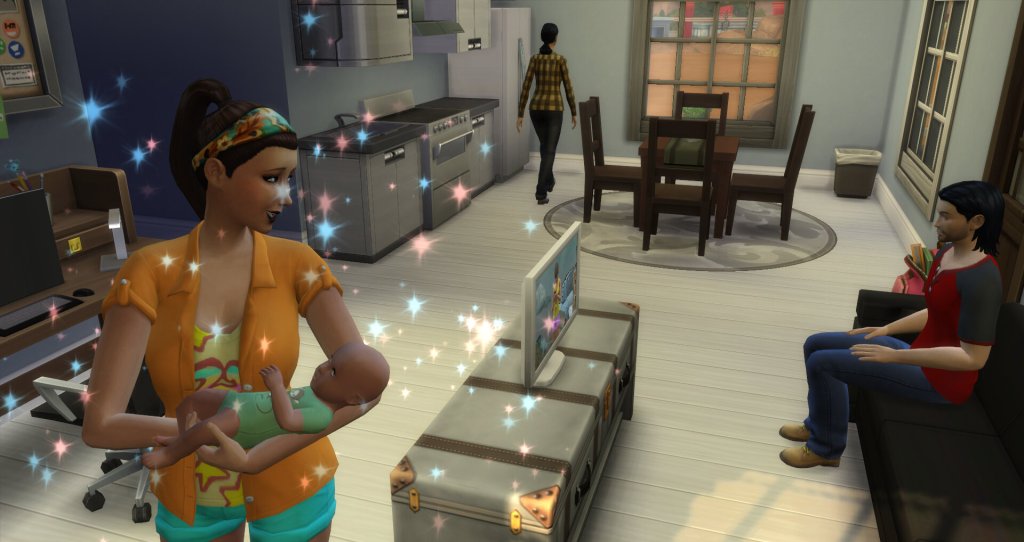 Febe gave birth to a boy named Sage.  She’s like “hey I’m having a baby over here pay attention!”  If it was a girl I was seriously considering Salt or Paprika, lol.

Pepper has bad sleeping habits and Febe was up half the night with the baby.

Sage aged to a child.

They went to the Curry festival and all of them completed the Challenge except poor Sage.

Don’t look behind you!

I’m so rusty at this challenge.  This is Pepper’s birthday and it’s the first time I thought to have Febe take her fishing! 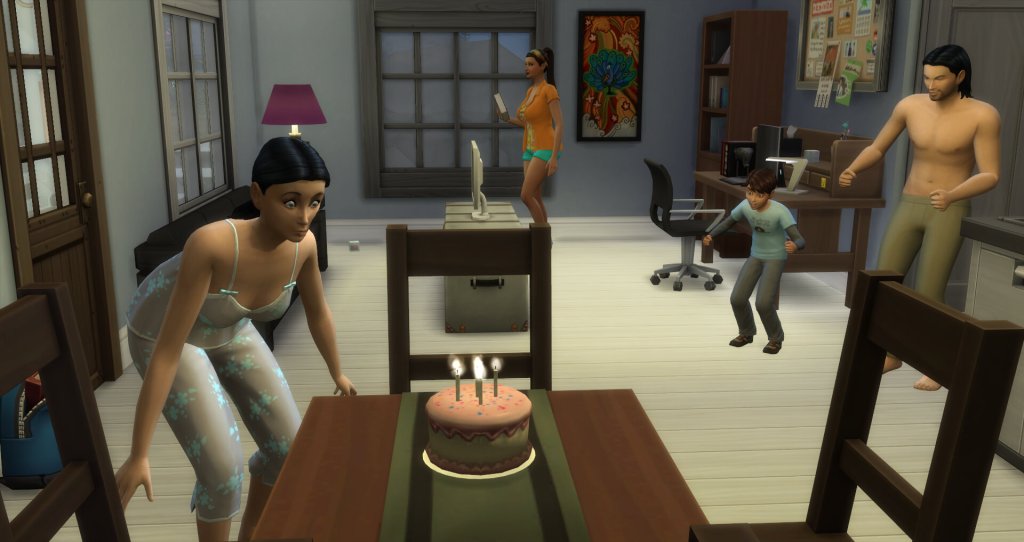 And so house 001 comes to an end.  A weird thing happened when she aged up.  All of her needs filled almost all of the way.  I think the same thing happened when she aged to teen because she stayed up all night but I’m not sure.  I am assuming this is a bug.  I didn’t pay any attention to the other’s needs when they aged up so I don’t know what’s going on. Kinda an unfair advantage going into house 002 tho.  She rolled genius for her final trait.  You’d think I wasn’t even rolling for traits since what she got would have been what I would have given her anyway!  Note: The same thing happened with the needs in my whim challenge when Blake aged up.

The completed house.  Sorry about it being dark.  I didn’t think to take a pic until after she blew out the candles.  If you’re interested it’s available on the gallery: Raines Abode.  I’d suggest putting it on a larger lot because there really isn’t any extra space on a 20×15.  The end value was $39,454 with $6,188 in reserve.  I stopped trying to make money after Pepper aged to teen or else it would have been a lot more. 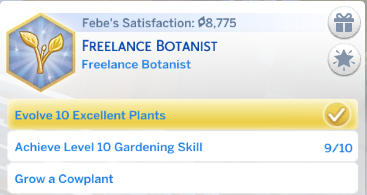 I wanted to get back in the habit of switching aspirations a lot and fulfilling whims to get lots of Satisfaction Points even though I really didn’t need them for this house.  I did use 1,500 for free services.  That’d buy a lot of moodlet solvers!