Blake had that weird birthday full needs glitch so he stayed up most of the night.

Brody woke up early and was watching tv while he ran on the treadmill and the neighbor lady freaked out.  How is it they can hear that tiny tv but not the radio that plays practically non-stop?

Tate trying to swindle more sims into donating to his cause.  He’s almost got enough to top the political career. 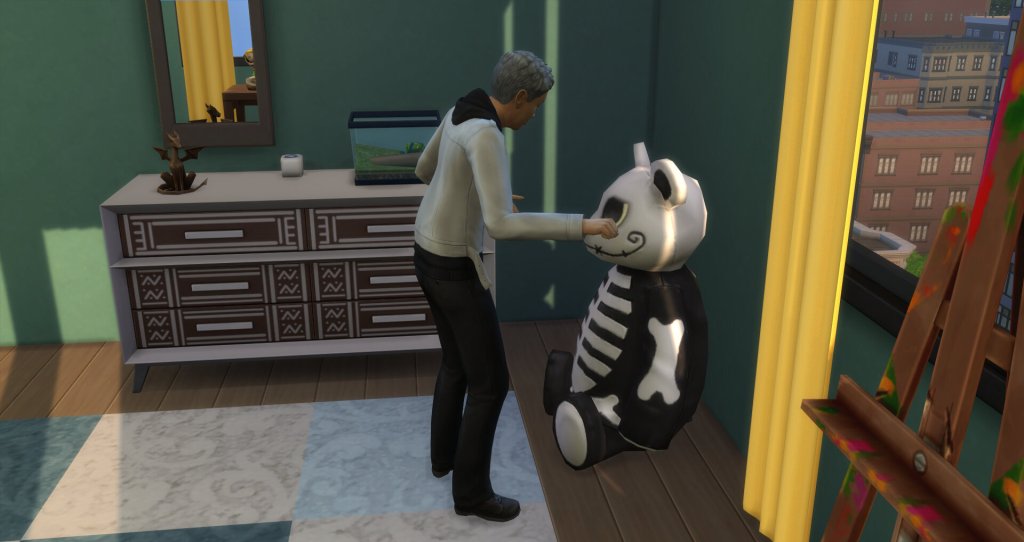 He got a new toy.  He’s slowly been wishing for more and more toys since the kids have grown to teens and I sold all of theirs. 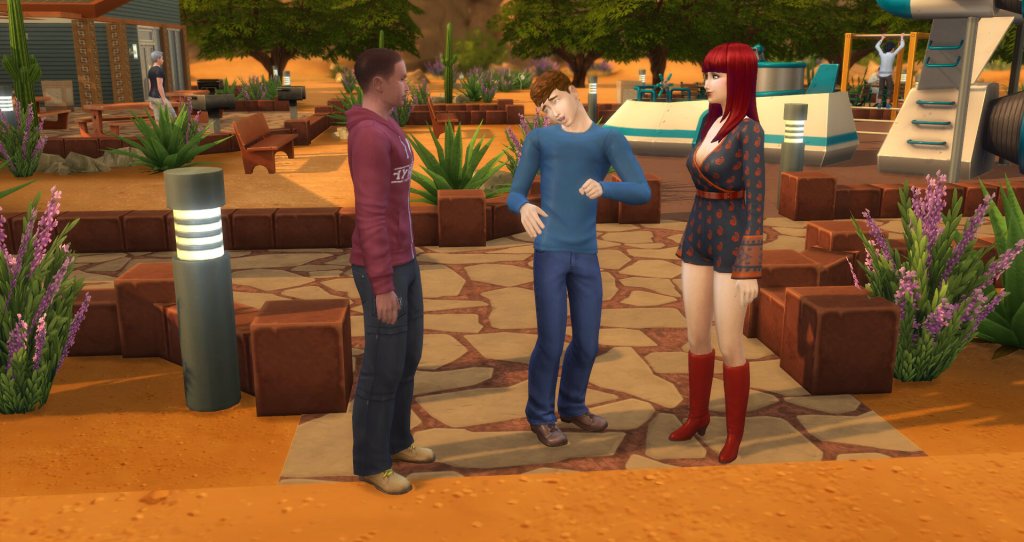 Hunter invited Phoenix to the park and I had nothing else exciting going on so the whole family went.  This is the only time they spoke and it was a pretty boring trip since nobody had any exciting whims.

Awe, Rae looks sad watching her dads kiss.  Maybe she wants a relationship too.  After I hook up her sister I think I’ll find someone for her and Brody.

Yet more swindling sims into giving away money. 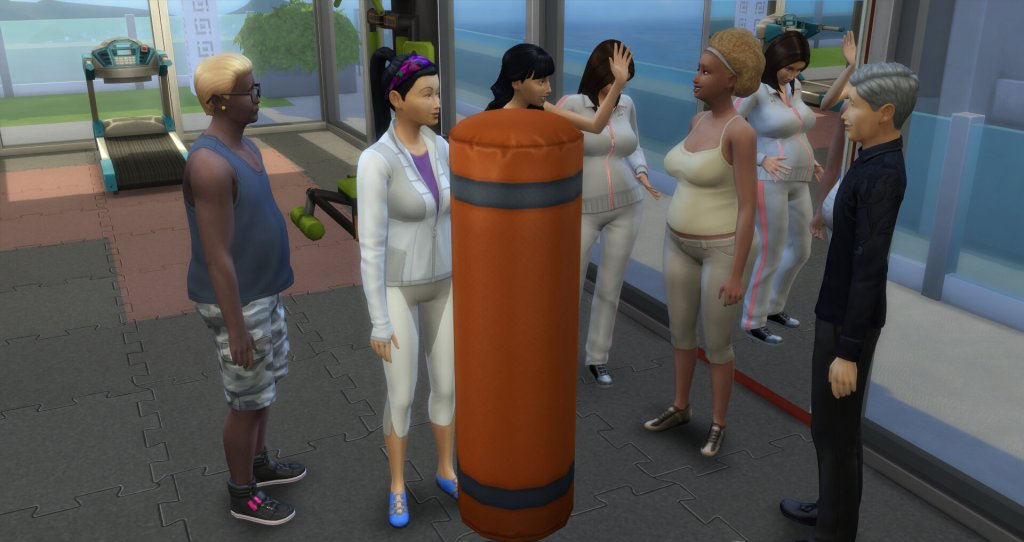 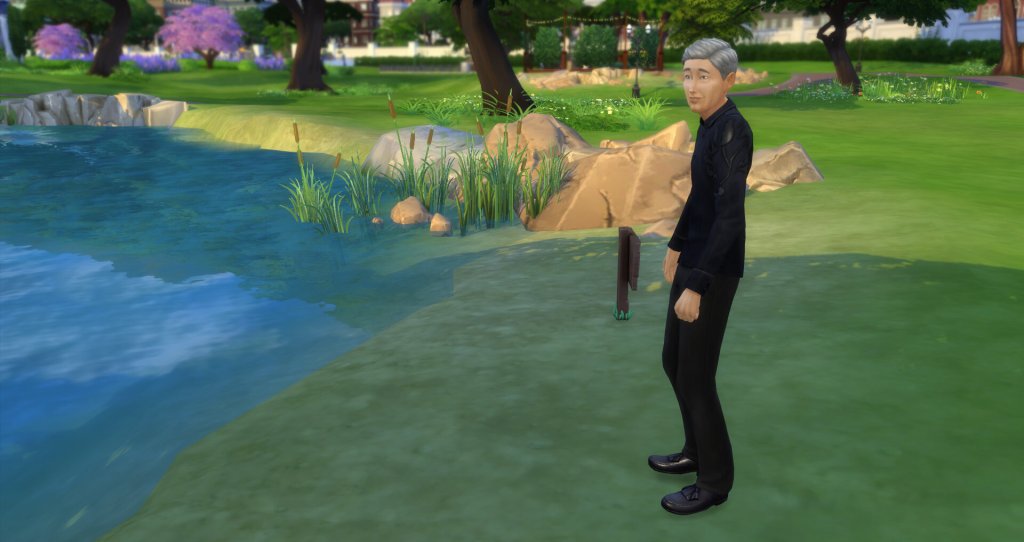 Once he’s done with work he heads to the park.  He had a whim to cook fried fish and he had no fish.  I tried to get a pic of him actually catching a fish but didn’t manage it.  He caught a goldfish I think. 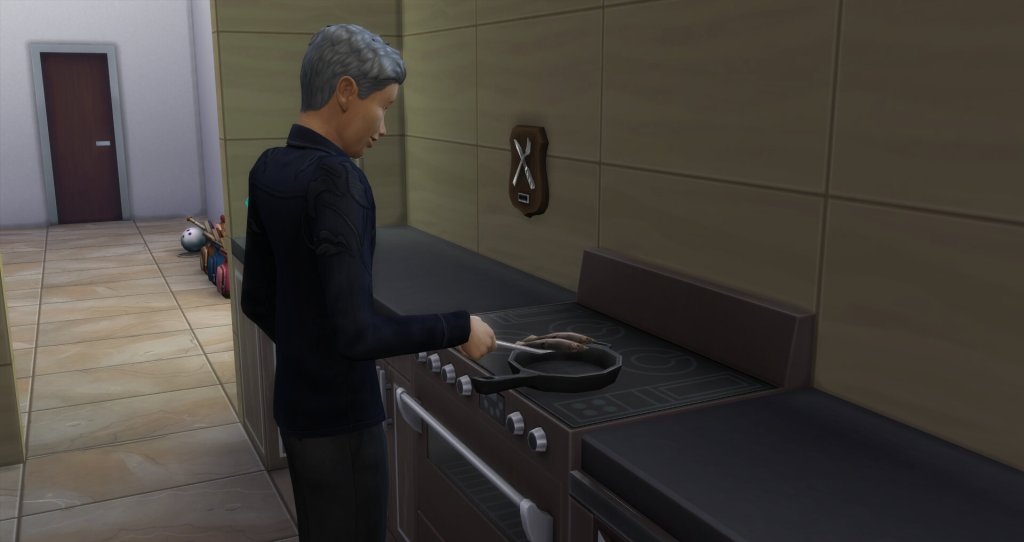 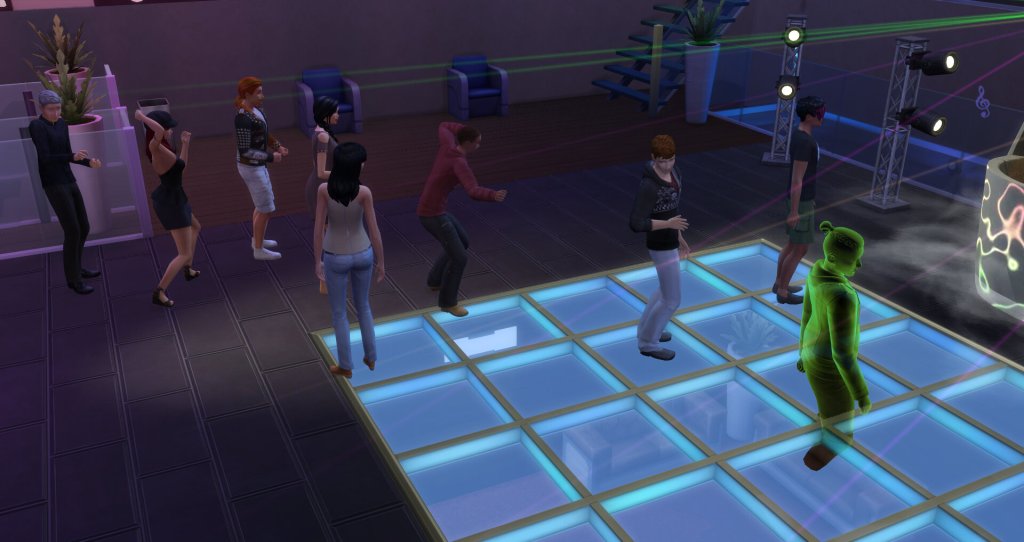 One of Phoenix’s club members invited her to dance and she brought along the family since yet again nothing exciting was going on at home.  They didn’t stay long since everyone started heading for couches to nap on.

Surprisingly, I think this is the first time this has happened in this challenge.  It happened all the time in my Sims 3 version.  You can only click on the needs of the other sims and this time when they were woken from their beds by a neighbor’s noise once the noise was gone I clicked and they all went to nap instead of sleeping in their beds.

It was Saturday and there wasn’t much going on so since Phoenix had the ever-present whim for a club gathering they went to the karaoke bar.  She had a whim to chat or something so she’s chatting with Bradley. 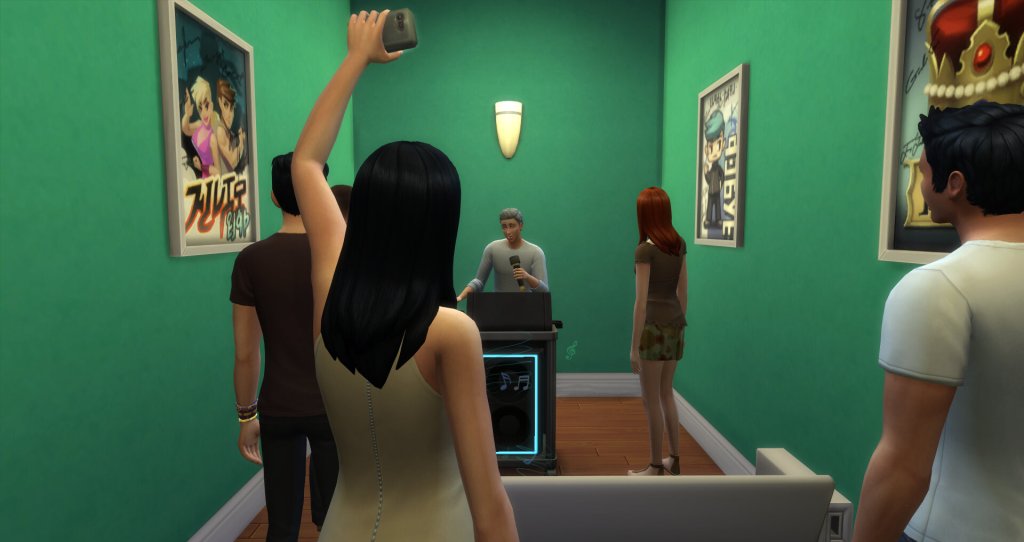 Blake drew quite the crowd with his performance.  These rooms are kinda small for taking screenshots in.

Phoenix and Bradley sing a duet.  At least the option to sing with club members is there.

Everyone goes in to watch Tate sing.

Of Phoenix’s friends I can’t decide between Bradley and Hunter for a love interest.  Bradley is more edgy like she is but Hunter has this sweet and calm demeanor that I like as well.  Both are really cute.  I guess we’ll see what traits they age up with.

Everybody shows up for the birthdays.  At first I was going to do Phoenix’s birthday and then the twins on the next day but technically they should have all been born the same day and I was itching to move on in the challenge.

Phoenix ages to young adult.  Her traits are outgoing, insider and self-assured.  The club whims are already annoying the heck out of me so I wish I had gone with something other than insider.  I rolled for self-assured because I couldn’t think of what else to give her. 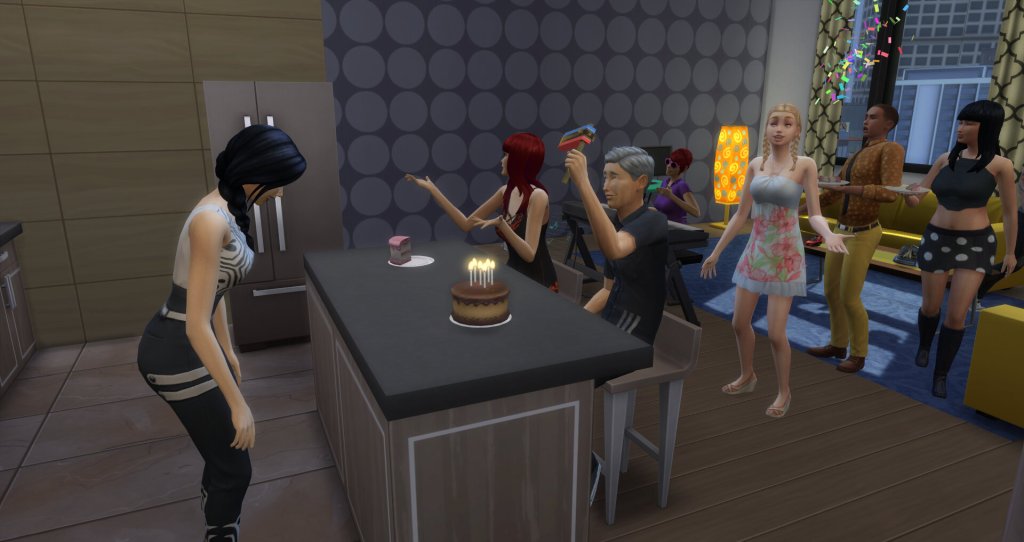 Next Rae is aging up.

Then Brody… and that’s it.  It’s the end of an era.  At least I can still follow Tate’s whims and he should top his career the next day he works.  As far as Phoenix’s job goes I have no idea what to have her do for money!

Of course, Phoenix gets scorched again.  I wasn’t going to move them at first.  I had planned to keep them all together in one apartment but I couldn’t figure out the bedroom situation.  Then I was going to just move Rae and Brody into the neighboring apartments but after thinking about it I realized that it was fun starting in a new place in Tate’s generation so they moved.  Unfortunately when they arrived (Blake was at work) the furniture was all gone!  I ended up getting rooms from the gallery since I really wasn’t interested in decorating the whole place myself.  I’ll take shots of it in the next chapter. 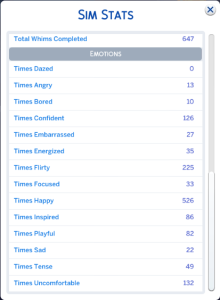 Tate’s stats as of Phoenix’s birthday.  Hopefully I’ll remember to take a pic of them at the end.  He got almost 100 more than his mom but he had almost 100 when he aged up to YA I think.  Phoenix is starting with 136.