Pepper and Lucas brought her brother Sage along to keep little Fern company on their camping trip.

They start out the trip fishing together all morning until one by one they all give up.

Pepper quickly completes the first level of the aspiration. 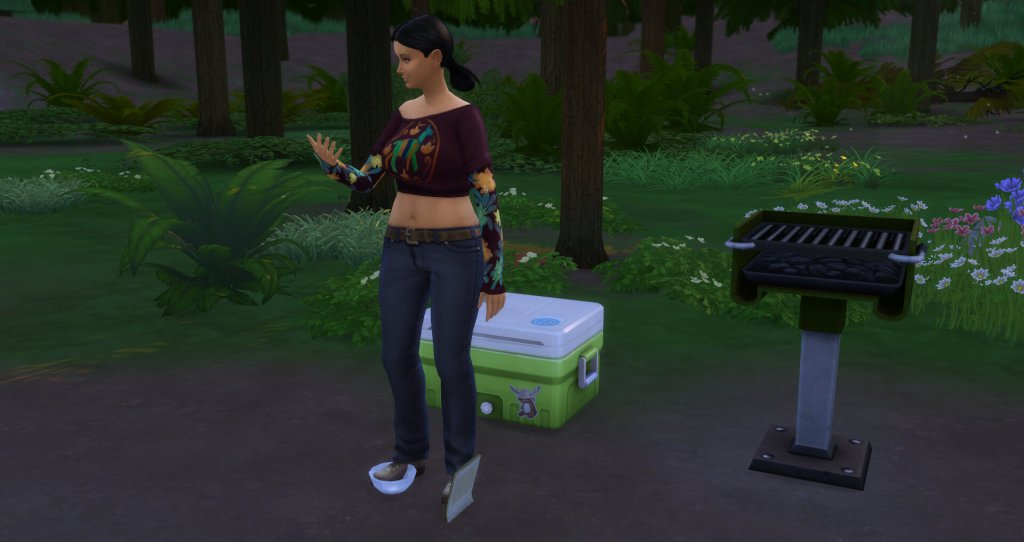 Haha!  She’s standing on the herbalism book and a bowl.  The funniest part was when she turned the pages in the book the one on the ground moved!  She got to level 3 herbalism reading the book.

Poor girl.  I torture my sims in this challenge.

I misunderstood the step that said to eat plants and thought it said identify plants so she sat trying to identify them and meanwhile I couldn’t figure out why the aspiration wasn’t counting them! 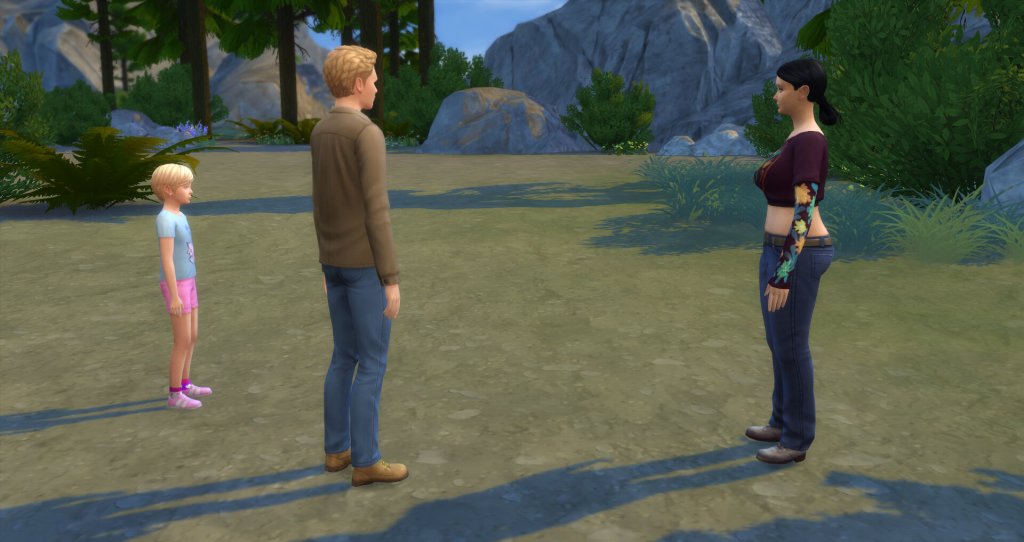 They make their way to the hermit’s grotto so that Pepper can search for more plants there and another special reason. 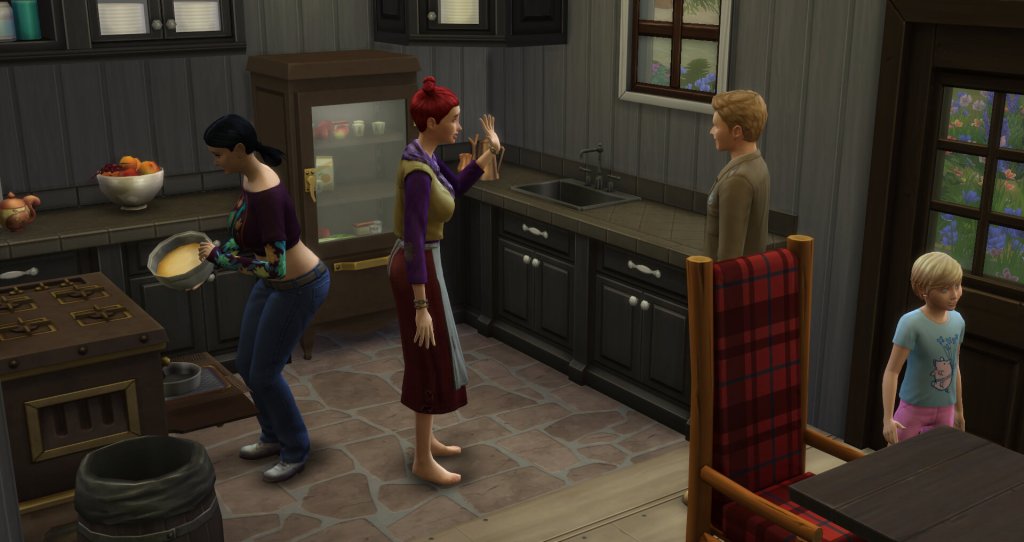 Ohmygod!  It’s the hermit!  She’s here!  You have no idea how nervous I was.  I didn’t even look for her when I was looking for the house.  If you have no idea what I’m talking about… in my previous house 002 the hermit never appeared and I had to start a whole new save file which took a lot of work. 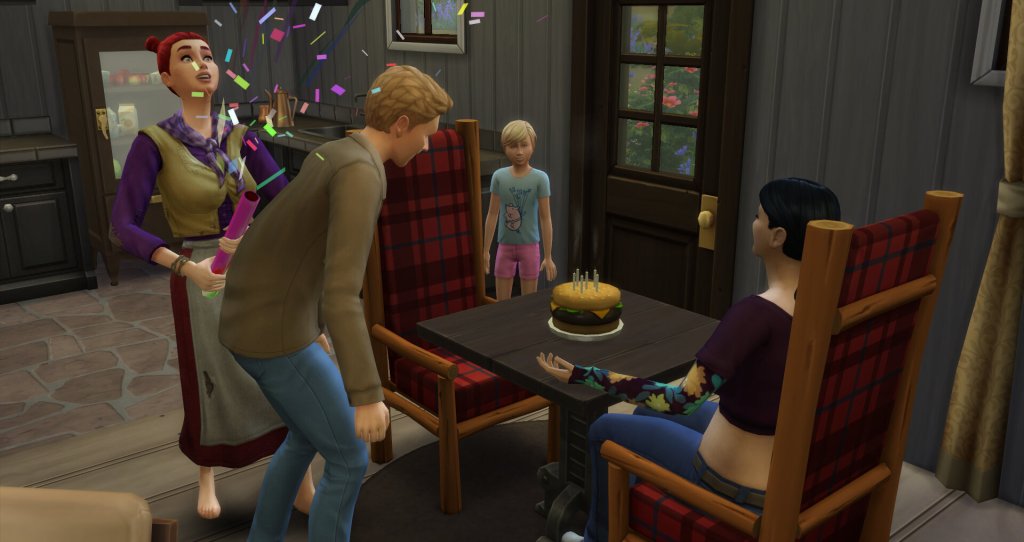 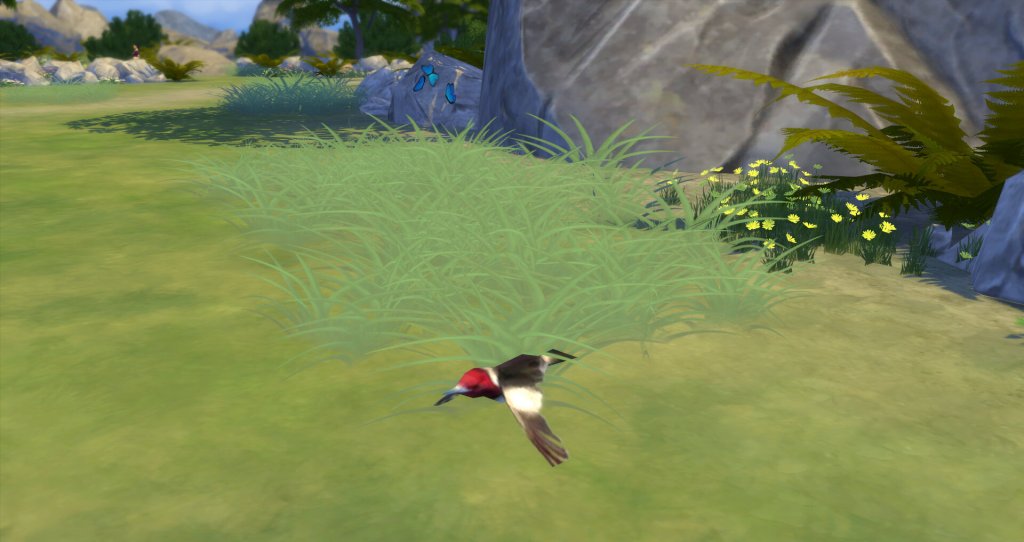 I just thought it was cool that I paused just in time to see this bird.  It almost looks like it’s laying in that grass. 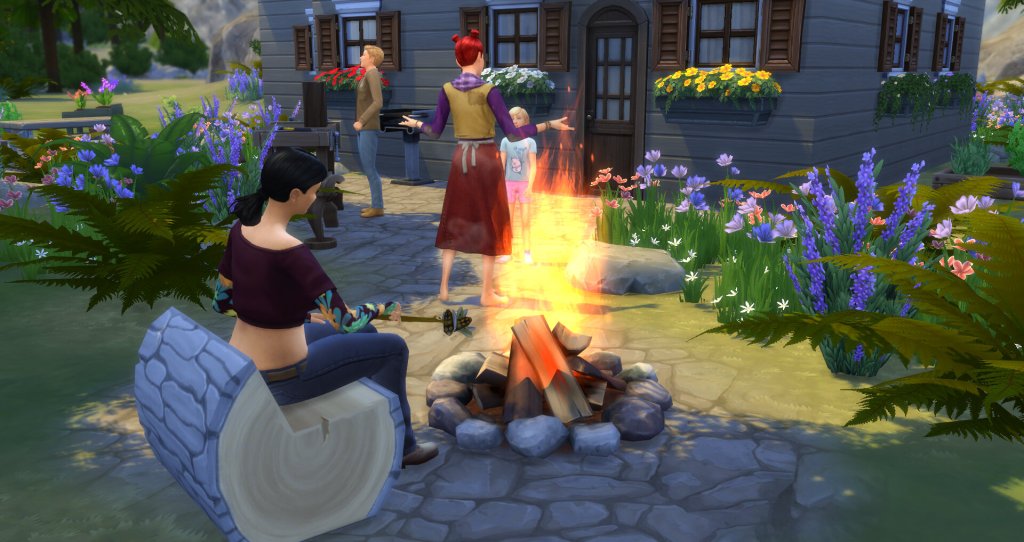 When they were in the other forest it said Lucas gained the handiness skill.  I couldn’t figure out what he could have possibly been doing to do that.  Now I know.  He was obsessed with this thing.  I bought one for him when they got home.  I love it when my uncontrollable sims have hobbies. 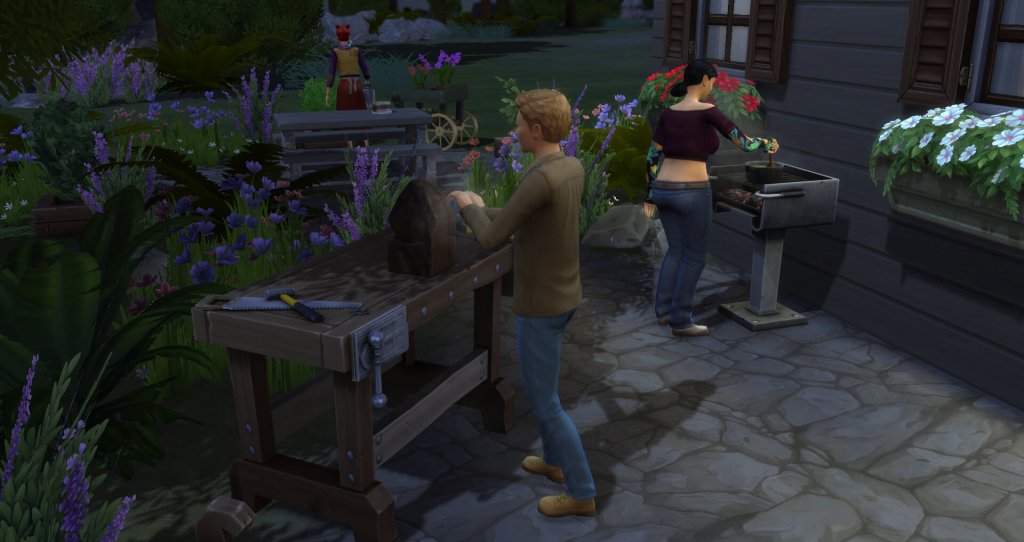 After many hours brewing concoctions Pepper’s herbalism is now level 7.  Fern is sleeping in the hermit’s bed and Lucas isn’t tired because his needs filled when he aged up.  He’s been crafting all day. 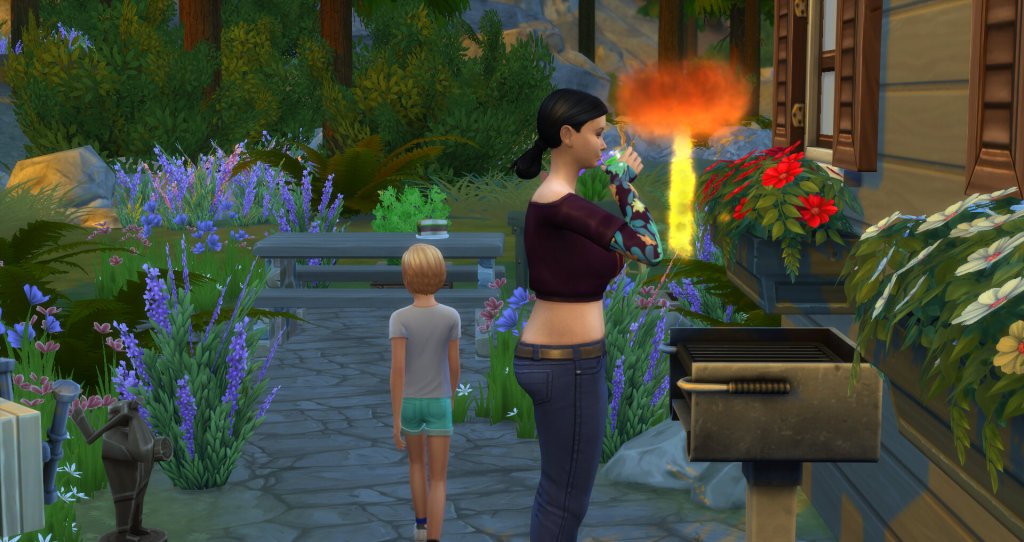 After brewing all night Pepper drinks another moodlet solver potion and they head back to the campsite.  It was fun hanging out with the hermit.  I actually didn’t have Pepper introduce herself until she was on the “befriend” level of the aspiration.

Oops!  Sage, we kinda forgot about you buddy.

Pepper is now level 9 herbalism and on the last part of the aspiration.

Fern is such a trooper.  She found lots of things to entertain herself during the trip.

These are so freaking cool looking.  The only one I like more is the dragon dragonfly, sadly we didn’t see one this trip.

Pepper has finally caught all the insects she needs for her aspiration and takes a break to eat some potatoes that Lucas cooked.  I have no idea where Sage was this whole time.

Time for sleeping in the tent. 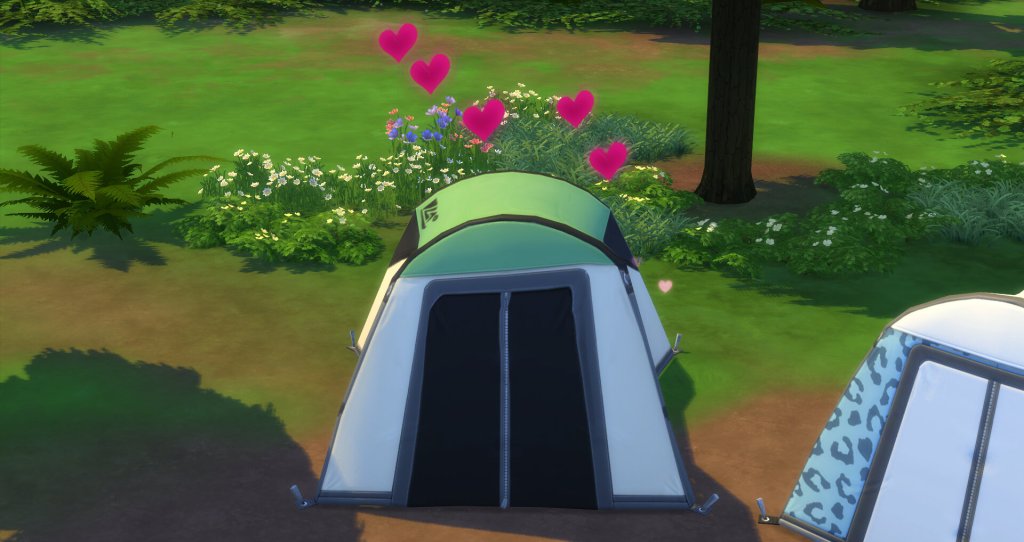 She had a whim to try for a baby with Lucas and I thought why not?  (I didn’t take a pic of the test when they got home but she is pregnant… get ready for another nooboo!)

He looks like his face is sinking into the bear’s!  It was really funny, the bear was flirty and his mannerisms looked so goofy on a bear. 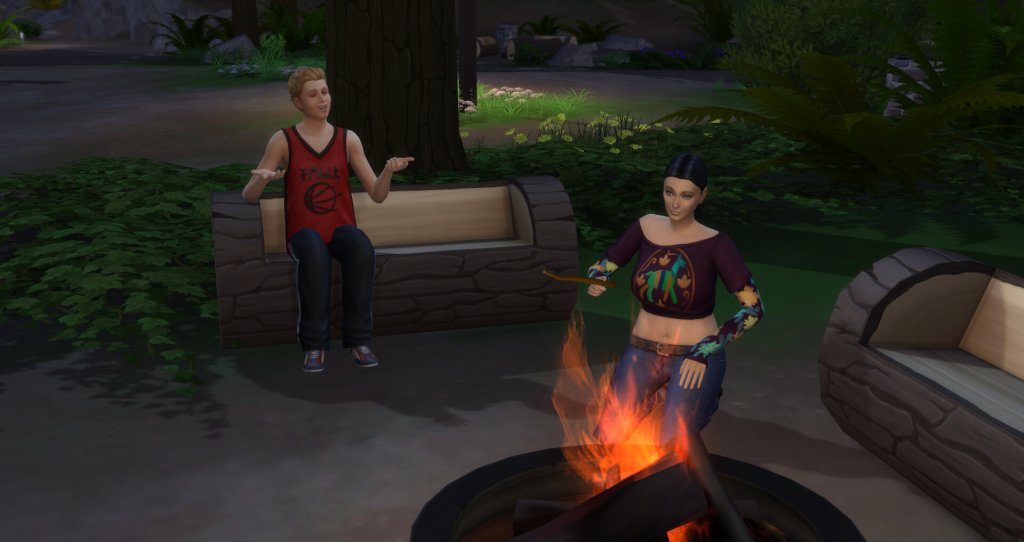 Finally, Pepper is level 10 herbalism and just needs to wait until she’s tired enough to sleep all night in the tent. 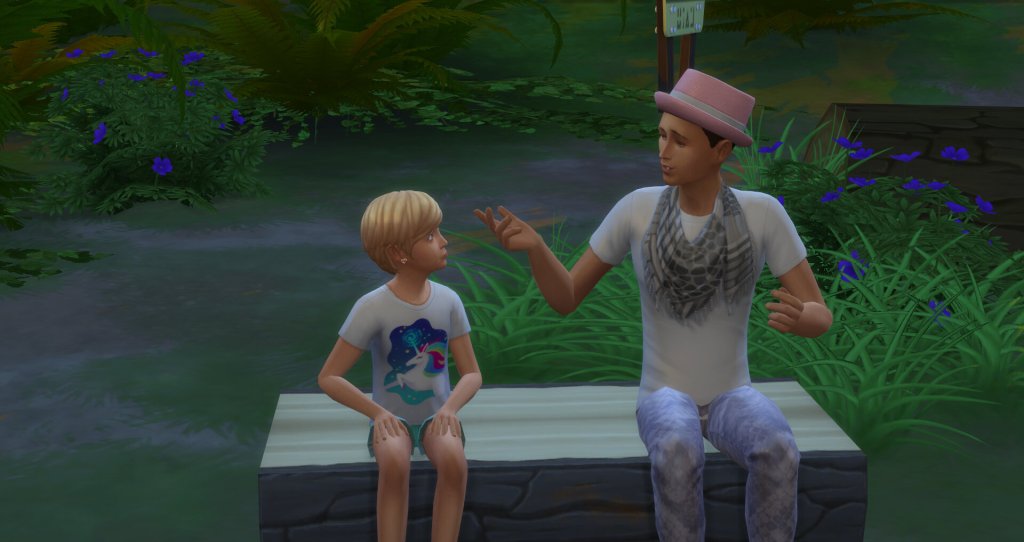 You would think that they would have missed a lot of school but actually they left Friday morning and went home Tuesday morning. 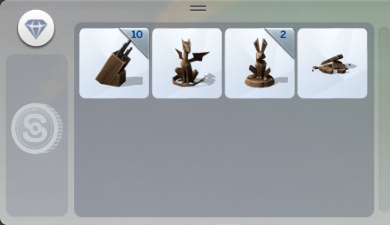 Look how many he made!  Holy cow.

For your entertainment.  I went into manage worlds to change Sage and Febe’s clothes and when I looked at his bathing suit he was wearing this.  And no, the setting was not set to feminine!  I almost died laughing.  I had to share!