Tesla at work in her second trimester.  By the time she completed her tasks for the day I had to spend the rest of her workday keeping her needs up. 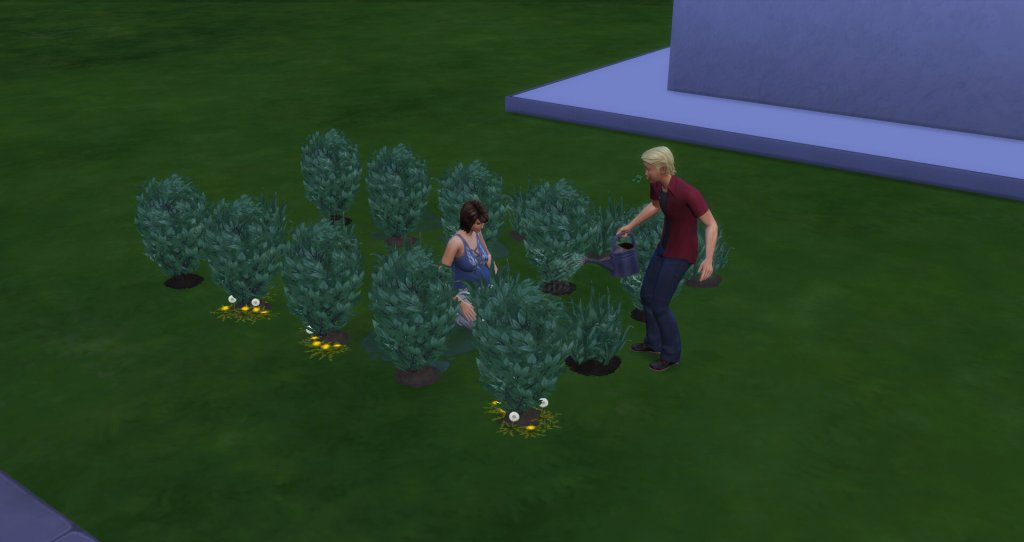 Then it’s back home to work on the garden with Nolan. 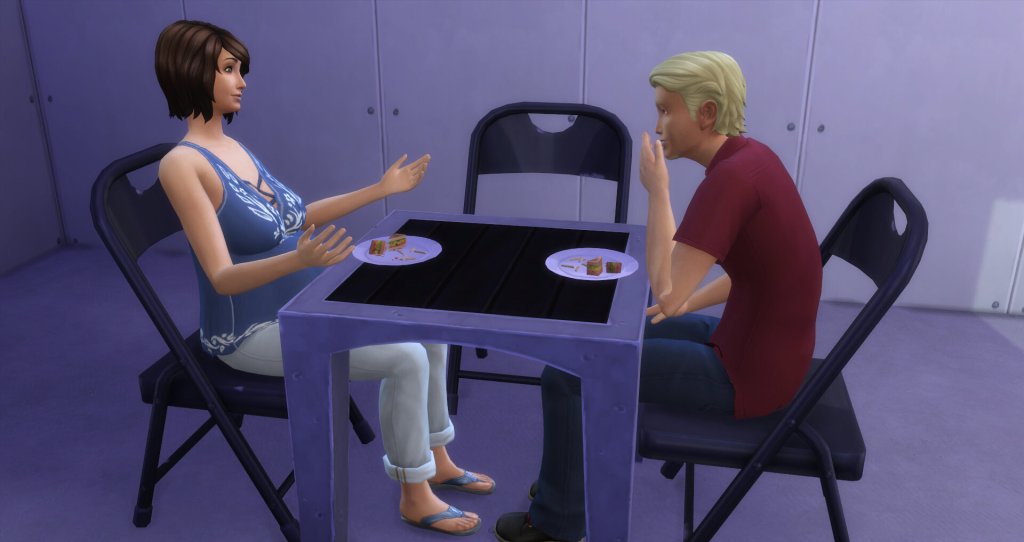 They have a late dinner and are off to bed.  They really don’t have much time together and I haven’t really warmed up to him yet.

The tasks for this day were really annoying.  They had her running from one side of the place to talk to one person to the other side to talk to someone else!  I didn’t like this alien.  Even though he had decent traits he was mean to her. 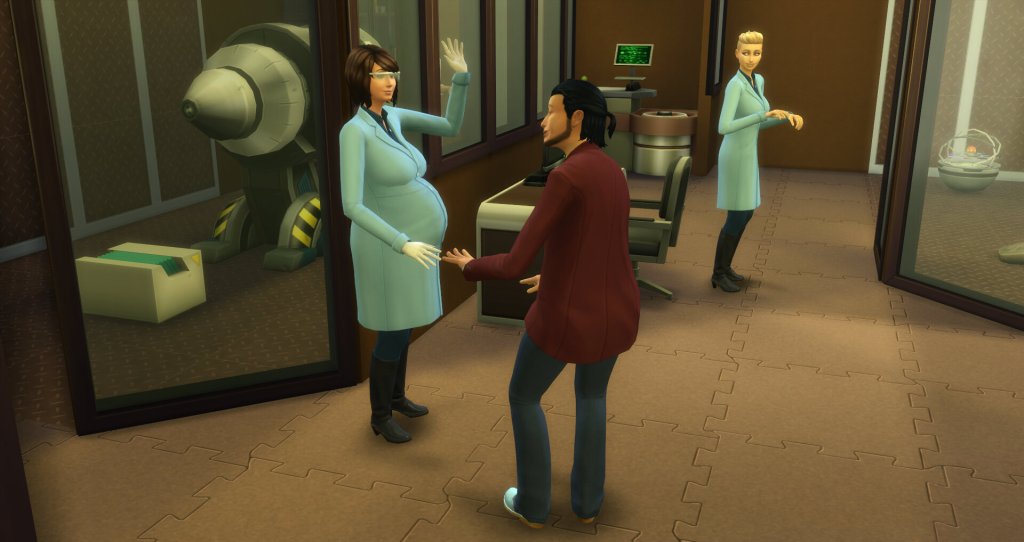 Then she met this one.  He had a job which was a plus but he would have literally been working all of the time when Tesla was home.  I just thought it would be kinda weird. 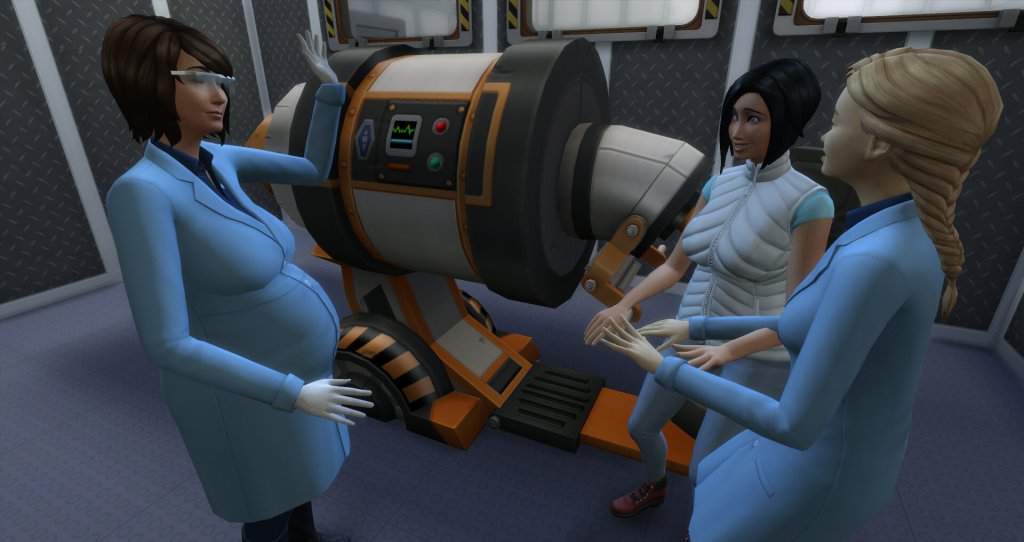 Last she met this one.  One of the tasks was get to know and I didn’t que up all 3 get to knows at once this time so when I tried again later it wasn’t there as an option!  I hate that. 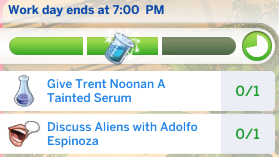 She still hasn’t made a tainted serum and I couldn’t find Adolfo!

We played a game of where’s Adolfo with the game paused.  There he is!  Way out in the picnic area under a tree! Geeze.  Her needs were absolutely horrible by this point so I was lucky this one completed the task bar.

Chatting with the alien Caitlyn again.  Oddly, her career is as a hostess at the restaurant!

Then she napped until time to leave.  Poor thing.

Awesome!  I was afraid her needs overcoming the focused a few times ruined her chances.

When she got home it was like a race to keep her needs up so I gave in and sent her to the hospital instead of having the baby at home.

I guess Nolan is too freaked out to go into the room with her.

It’s a girl!  And the ley line trait didn’t give us twins which I was very disappointed about.  I doubt I’ll have another baby in this house though.  Her name is Mona after the Mona Lisa painting.

Amazing!  A room actually decorated.  It’s not that I don’t have the money to do so to the rest of the house.  I just can’t decide what to do with it. 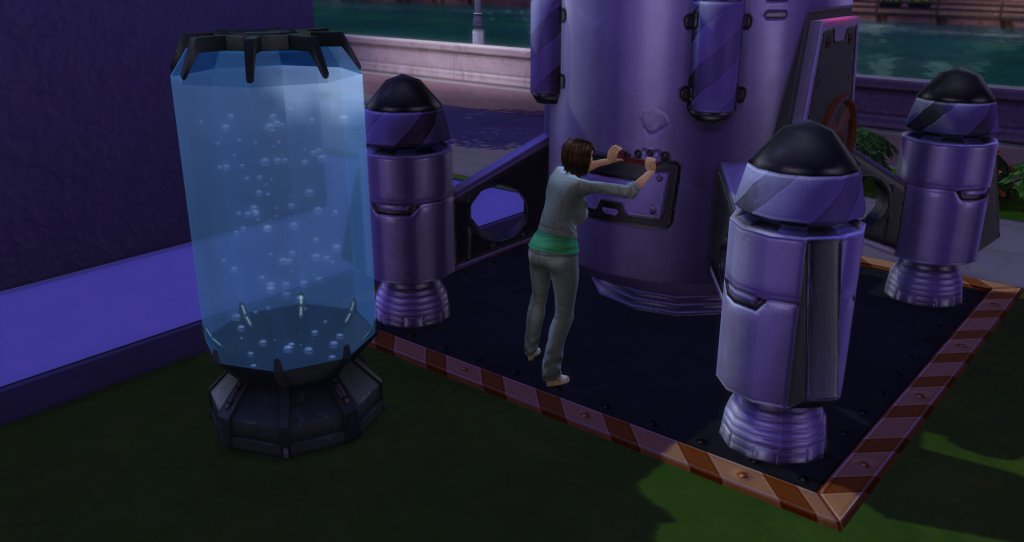 Since her needs were filled at the hospital Tesla spent most of the night upgrading the rocket. 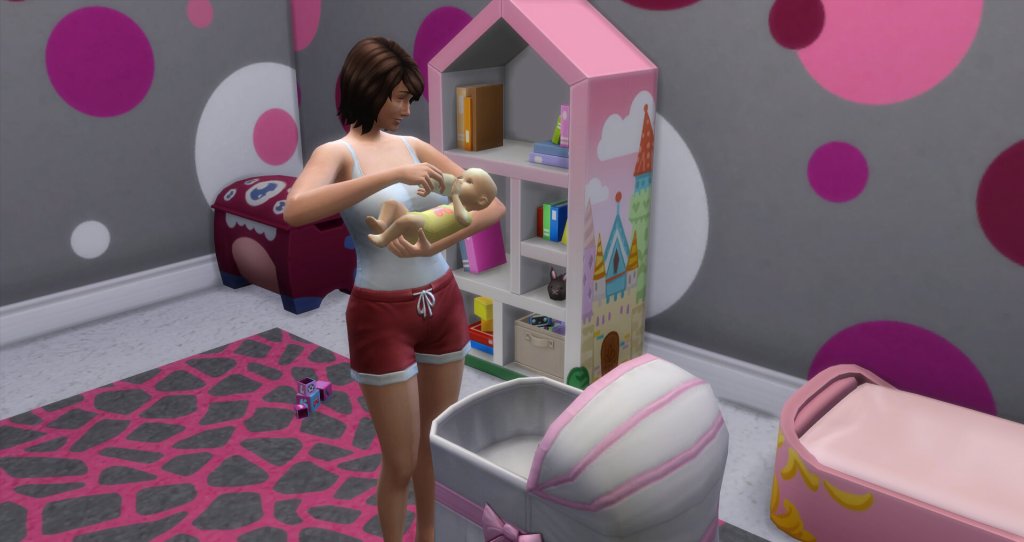 Then she spent most of the time she slept the next night waking up and feeding Mona.  I’m already looking forward to her aging up. 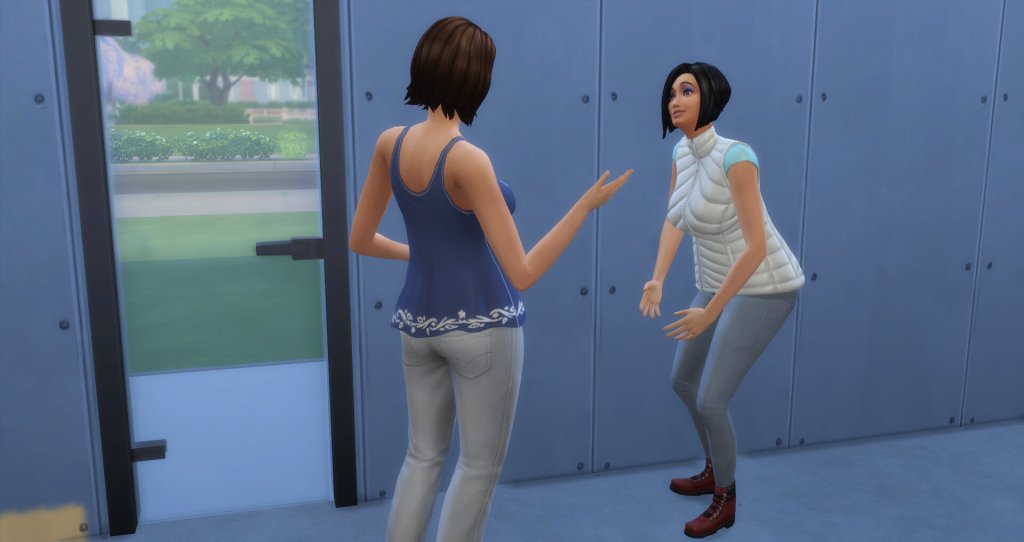 Sunday she invited the alien Caitlyn over to find out her last 2 traits. 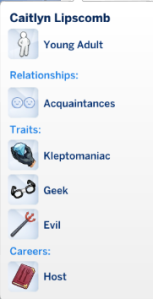 I actually think an evil klepto alien is kinda funny.

This was funny too.  They’re cloudgazing in the light well room. 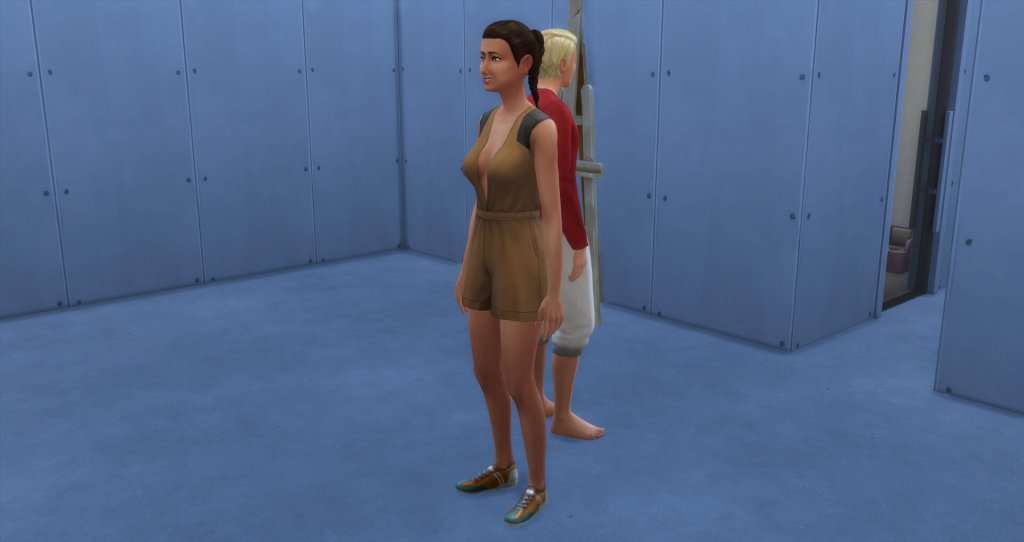 Erm yea.  So she moved in and this happened.  I wanted to see what color her alien form is (blue) and when I had her change back she looked completely different!  Like, she’s way thinner and everything!  I was totally floored.

It was just too weird having her in disguise when she looked like that so I added hair and a little makeup and I guess she’ll live undisguised.  Craziness.

Here’s her skills.  Both her and Nolan have painting skill which is promising.

Later Kelvin invited her to his house.  I decided to leave Nolan and Caitlyn home to care for the baby. 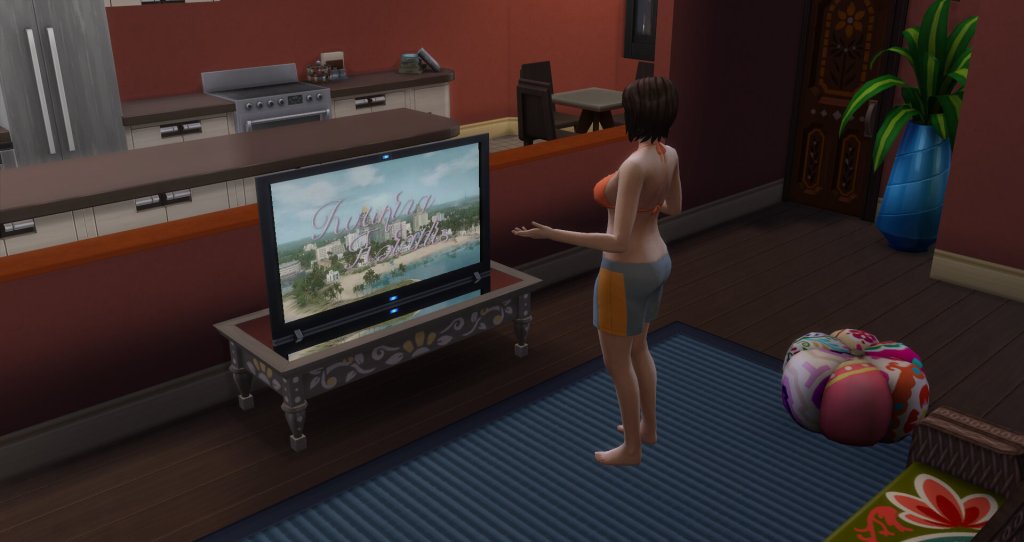 She played on the slide a bit and watched a movie.  I’m sure she misses the comfort of a fully finished home.

Then it was back home to start the grafting process.  With 3 adults caring for the garden shouldn’t be as bad, if not I’ll give in and get free services and a gardener. 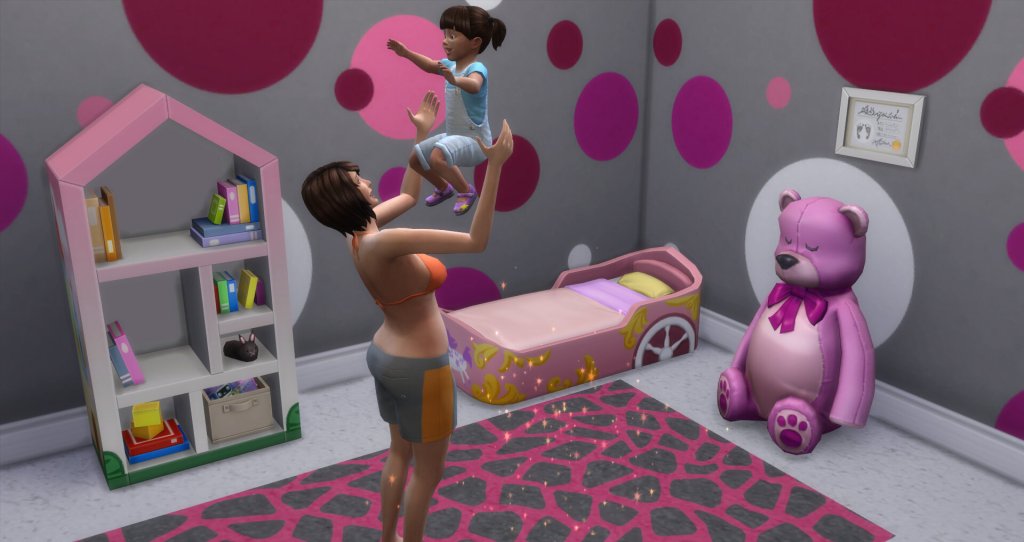 First time I’ve managed to pause in time to get this.  Although the bassinet seems to momentarily disappear it still looks cool.

This chapter was 4 days. The house value is $25,130 halfway there… I don’t think that’s much different than the last chapter.  They have $5,223 in reserve.  I know it should be more but she’s done like 3 or 4 upgrades to the rocket.  Her rocket science skill is level 7.  She’s level 7 in the science career.  She’s moved in an alien friend and had her heir.  So 3 levels in rocket science, 3 levels in her career and visit Sixam and bring back 3 space collectables, oh and finish the house.  Yeah, we still have quite a bit to go when you put it that way!