You might have noticed at the end of the last chapter that the tv and computer were both broken.  I didn’t want to waste the money replacing them so they hired this chick to repair them in the morning.  If it was plumbing they could do it but I don’t want to mess with electrical with no skill.

Once she was done Acheron talked to her for awhile.  I don’t know if it was because of this or what but they got charged twice.  I was not amused.

Finally Keres can get this book!  She’s been doing nothing but reading for days.

Read, read, read and read some more!  Who knew being the lead vamp could be so boring? 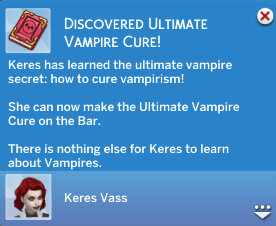 Well, it can be made but it’s expensive!

She made a plasma jane or something like that instead.

Here Rana try this!  The house is so small they keep going into the bathroom or outside to interact.  I plan to either rebuild or find another soon.  The drink filled up about as much as a plasma pack would.  Much better than plasma fruit but since it goes bad it’s not very useful.

Shysie didn’t have school and I got her an art table so she could work on her aspiration for something to do.

That night it was time for Dario’s training after Keres, Acheron and Kyran had fed at the stable.  Then it was back to the grind to try to get enough money to make the cure.

Finally, they had enough money from painting like crazy and then they didn’t have garlic.  Hoyt has garlic immunity so he ran around gathering some.

While he was out I noticed the mosquito thingy is harvestable.  I have no idea what to do with the thing he got because it can’t be planted as far as I can tell and there’s no recipes I know of that use it.  Odd.

This dude showed up at the door in the middle of the night so he must be a vamp.

Finally Kere’s makes the cure drink!  There was one tiny thing I didn’t expect…

It expires!  I thought it would be like a potion.

So I did a roll.  The roll came out slay and since Dario is the up and coming vamp that only joined the coven in hopes to take over he was the one to challenge her…

She was a much higher level vamp than him and I seriously didn’t expect him to beat her!

So it turns out that “slay” means cure.  I did some more experimenting because I made a separate save before they fought.  Here’s what I figured out: Slay cures; Duel is only available if the sim is mean or if they have a negative relationship but once they do duel it makes their relationship almost full in the negative; Vampires can’t “cure” other vampires there just isn’t an option the only way to cure the other is through slay.  So obviously my spar/cure/slay roll doesn’t work here and will have to be rewritten.  Since most of the challenge is based on this roll I’ve been thinking this over and this is mainly why the chapter is so short.  That and shock that such a lower vamp could beat his leader. 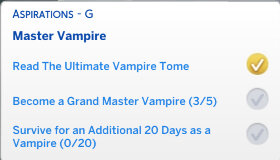 I was just thinking she was doing so well.

Keres is sent to live in the stable for now in case her skills are needed.  I should have had Acheron reading the tome to learn the recipes instead of her since I don’t have any plans to have him challenge for leadership.  Everybody is brought out and there’s mixed emotions regarding the change in leadership.  Rana especially who left the prior coven due to the strict rule of the male leader seems worried.  Kyran seems pleased and the girls look like they have some scheme in the making.

I was searching for who they could replace Keres with.  I hadn’t given it any prior thought.  This is Dario’s relationship panel.  It seems that I got Ayaka the vampire master mixed up with Masami the human!

I figured since Dario is the new leader that he would get first pick of who to turn.  So he invited Masami to move in. I decided to keep the money she brought in.  I don’t know if I will in the future but they really needed it.

Acheron is the only one with the ability to turn.  At first Dario and Rana acted excited. 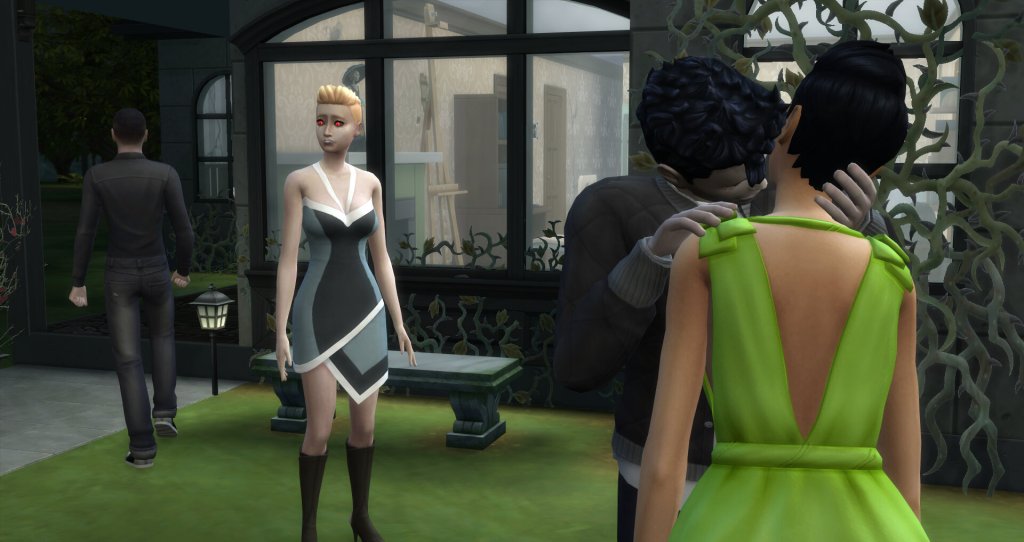 Then Dario walked off and Rana became sad.  I sense a lot of turmoil in this coven now.

Then for the final step it’s just Acheron and Masami alone outside.

I had Masami read until she could create plasma packs and Dario has a lot of reading and skilling to do now.  Both Rana and Acheron are higher than him and I had just gotten Keres high enough to train them all again and now I have to start all over again with getting his skill up.

Which also means he has to quit his job.  He was getting pretty high too!