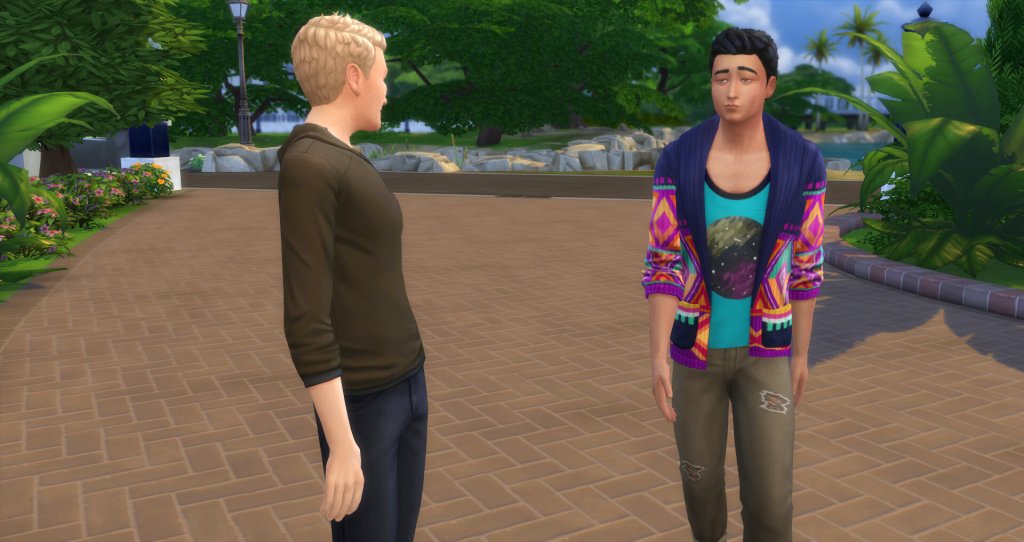 Remember I said in the last chapter that Leroy had an interesting young adult sim in his relationship panel?  I figured no time like the present and had him invite him over.  His name is Tobias.  He’s unemployed but that’s okay and he’s married.  I admit I was a little worried that the wife would have some horrible trait.

Apparently, Tobias has a little somethin’ on the side!

Klepto I can live with so I’m glad she moved in.  Especially after this… 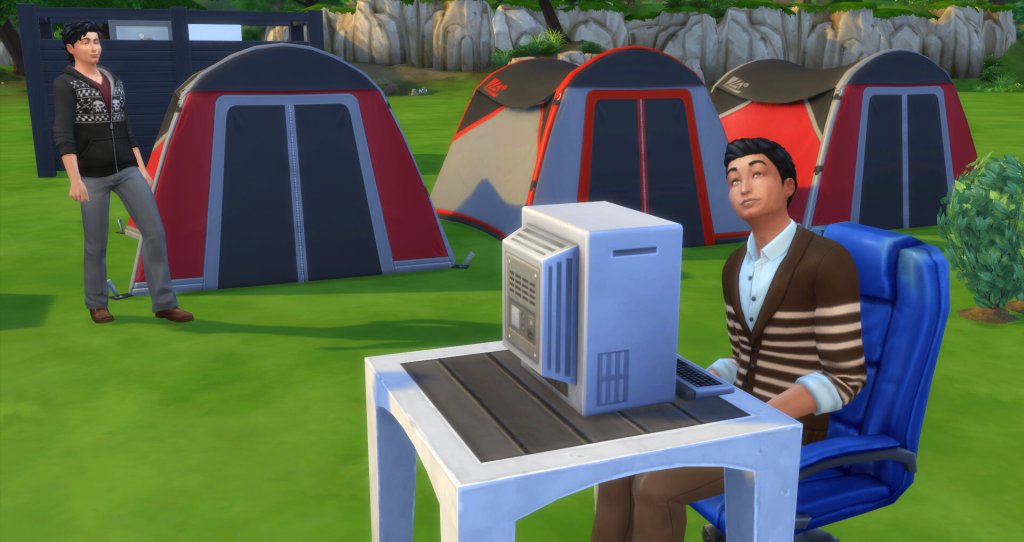 Here’s Tobias all cleaned up.  He’s quite handsome.  I picked him and Ciera for a couple reasons.  One he was cute and had good traits and two I really love both of their names.  Odd reason I know but Tobias is one of my favorites. Now that I’m posting this I realize I never took a pic of Ciera when she got home from work.  But really I didn’t change much on her.

I decided to put a wall up next to the painting area so that I can see the paintings instead of them sitting in their inventories.  Also, this counts towards the house value.  I’ve already switched a couple out for ones that they painted again that were a higher value.  I’m trying to get an idea of color themes by looking at them too.

And so the day ends with one more and final tent added.  I’ll be happy to see them go.

This is an angry painting.  Susana is hotheaded.  I wanted to take a pic of it because it seriously cracked me up! 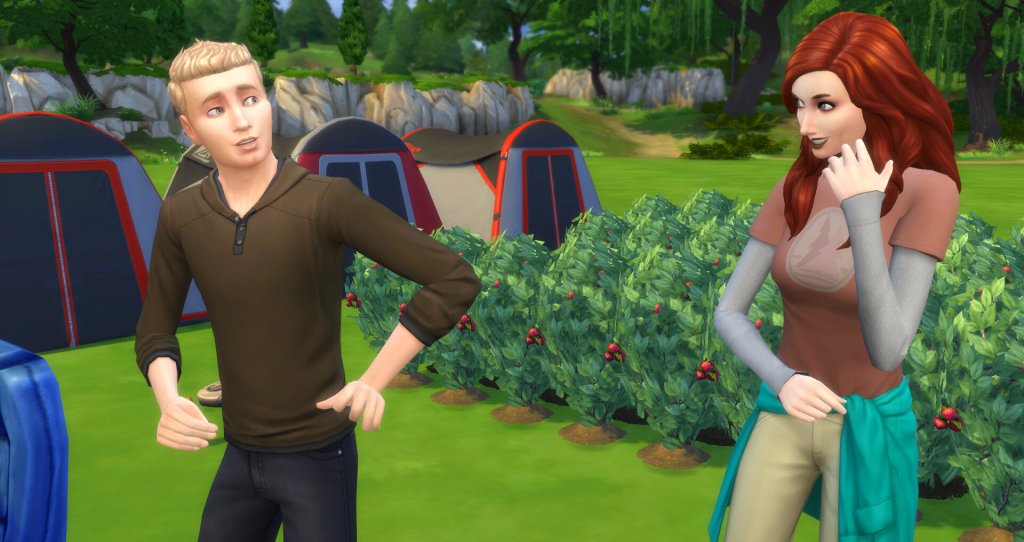 Both of them needed fun so they were dancing next to each other and I thought it was the perfect time for a bit of flirting.  She was all for it.

Then a first kiss… 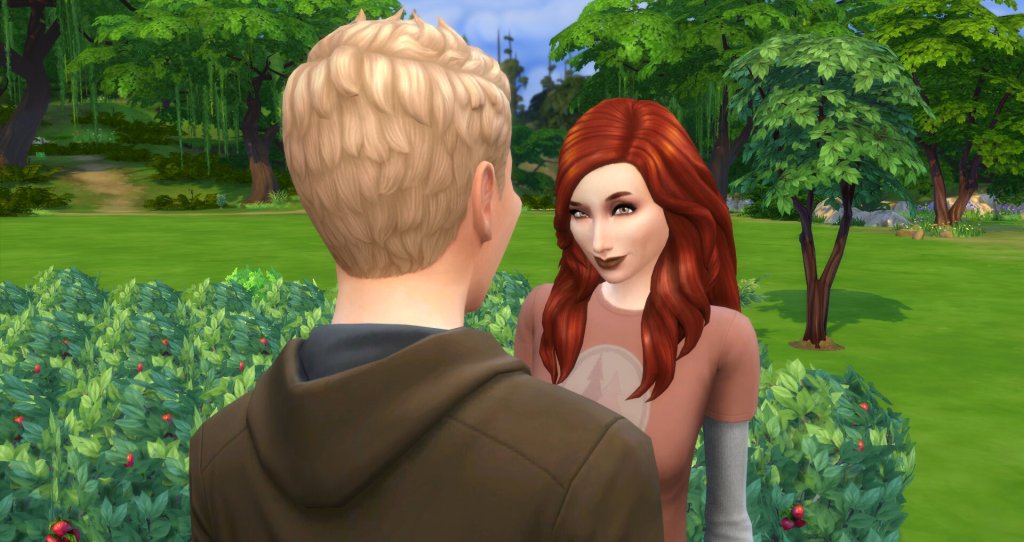 She’s so into him.  She’s a bit older but they’re cute together I think…

Back to work evolving together… 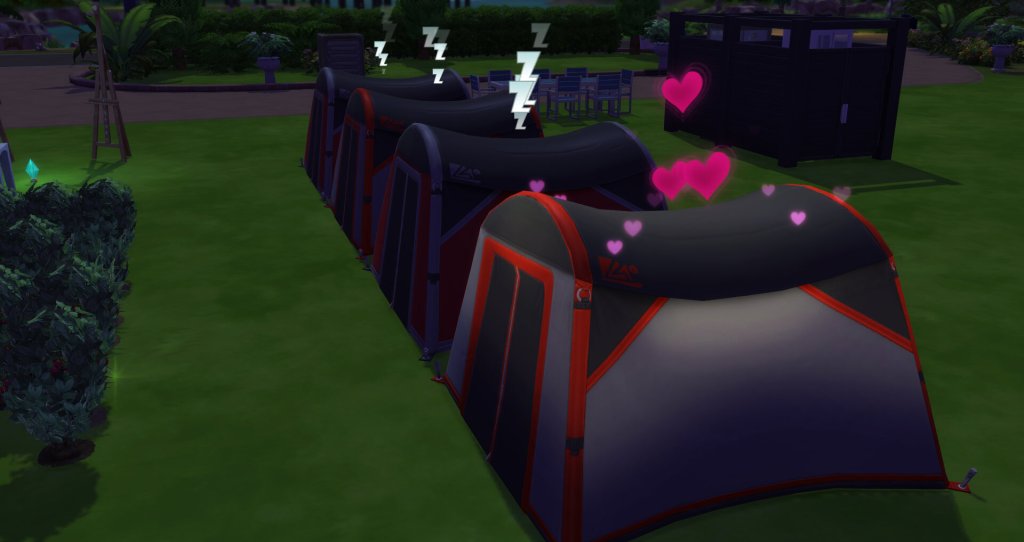 Then a little woohoo when everyone else is in bed.

Hmm wonder what aliens do different that tipped him off? 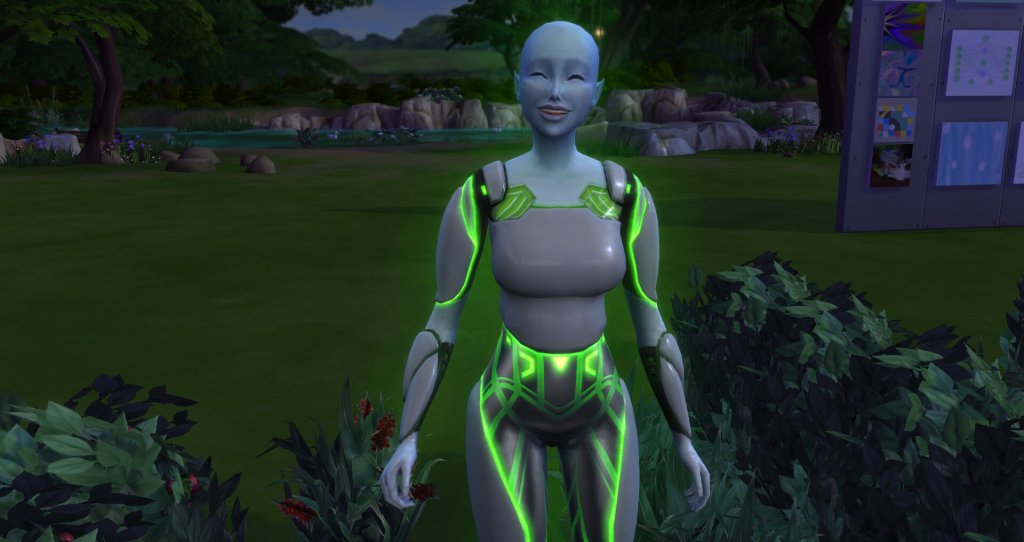 That reminded me I wanted to see her out of her disguise.  She’s blue just like the twins!  Oh man the plot thickens!

In the morning it’s back to work.  Work work work little worker bees!

What’s up with these mailmen?  Wonder what happened to the other one?  I’ve been having them send out the crystals and stuff for The Curator aspiration so we see him almost every day.

Wow she must have really wanted some alone time with him eh?  Seriously it’s so hard because they’re always in a conversation with Jamel, Susana and sometimes Tobias! 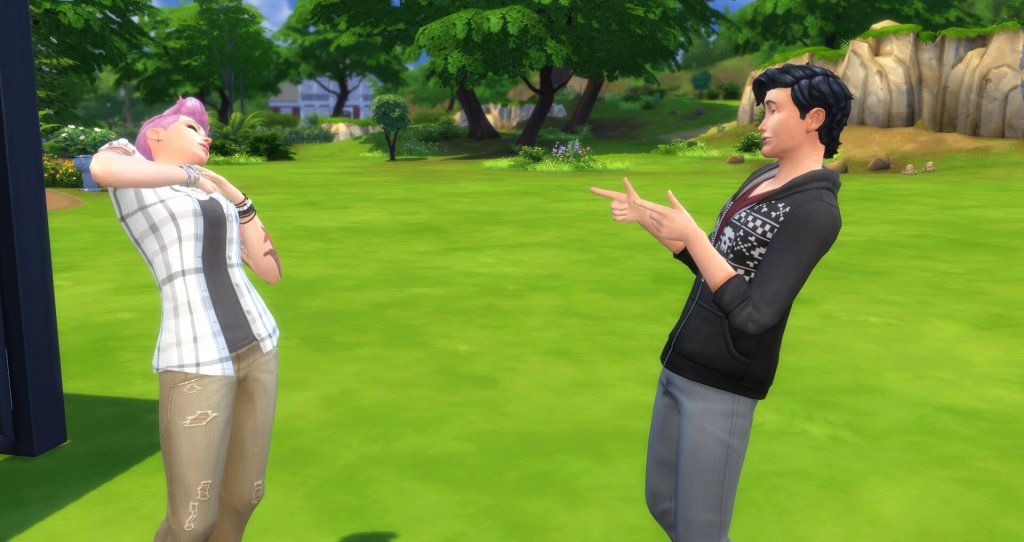 I took it as a sign and between keeping the others busy worked on their relationship.  Confident is great for the smooth pick up line.

I ended up moving them because the others kept trying to talk to them.  First kiss time!  I’m so excited about these two!

A little suave kiss for the lady.  Then it’s time to paint some flirty paintings!

Leroy had enough points for free services.  I’m sure him and Diane appreciate the help.  It allows them to do more gathering and a bit of fishing.

Speaking of gathering.  Looks like they’re trying to find a little alone time of their own.  Rendezvous in the woods?  I was queing one up and then once their tasks were full queing the next for the ones after that.  I had just gotten Ashton and Selena set up painting again and switched back to these two to see where they were.  I thought it was cute.

I think this is the first pic I’ve taken of this big table.  I did buy a picnic table but apparently that doesn’t count as a “I don’t need to stand in front of the fridge because there’s a table” table.  If that makes sense?  In other words they wouldn’t use it unless I told them to which was pointless. 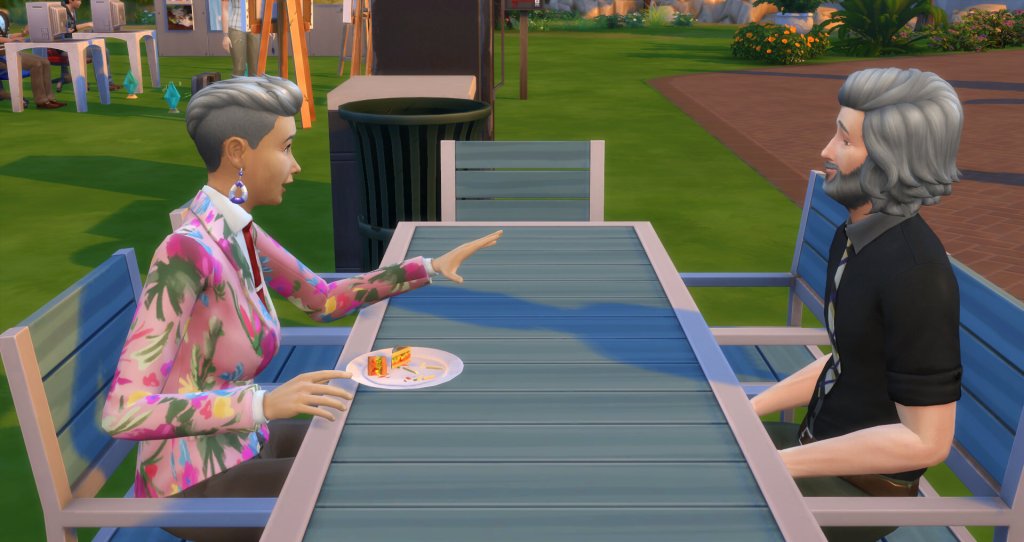 I’m really enjoying all of the couples.  Even the elders.  I’m glad that I got to play them especially since I knew Susana from house 004 and as I point out in a few house 005 and the failed house 006 chapters Jamel just seemed to show up everywhere so I knew him too.

Holy cow!  I guess a little chat with the wife inspired him! 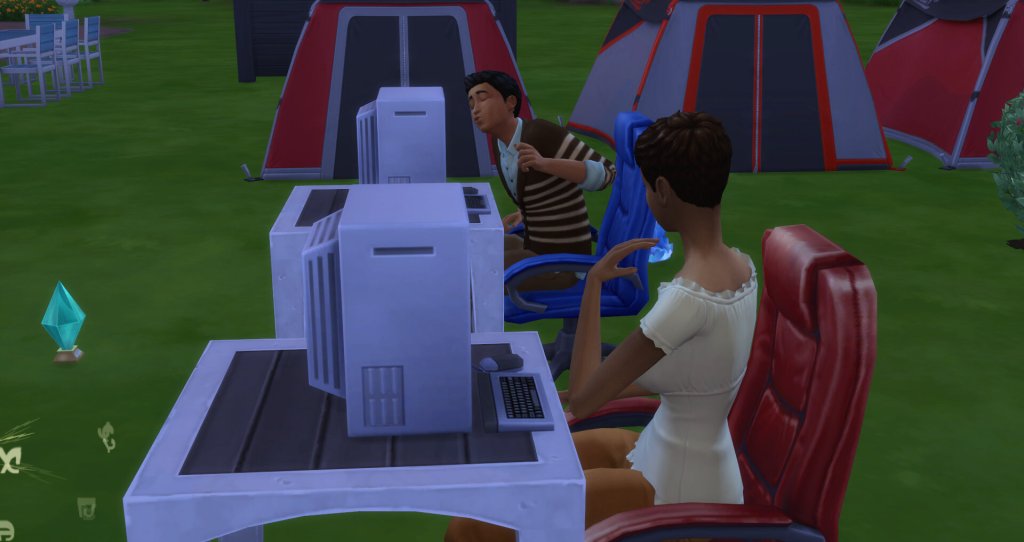 Maybe it will work for Tobias and Ciera.  You don’t see much of her because it’s a weekday and she’s working.  I know I could have her quit but it’s easier this way because it’s one less sim to keep track of and she makes good money. 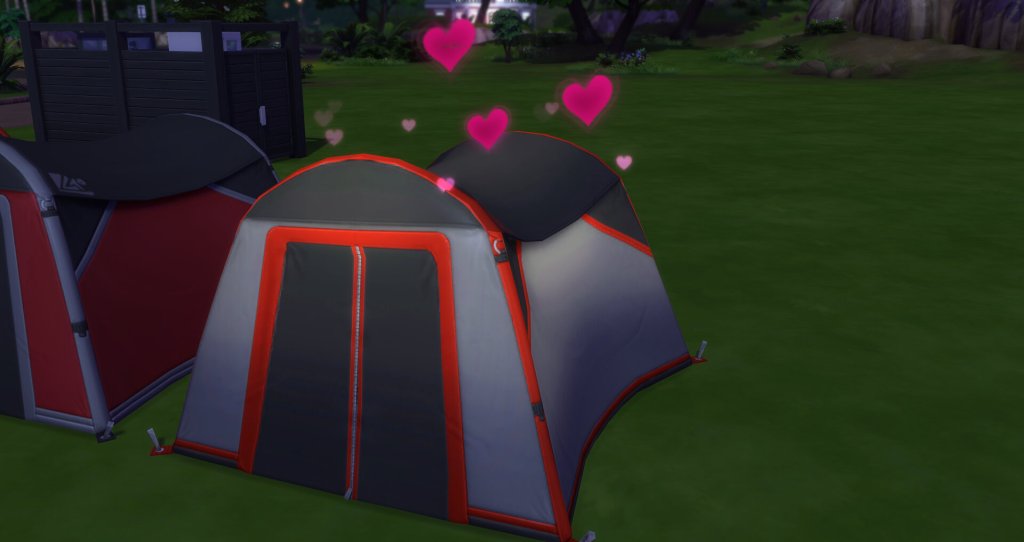 Then the night falls and first Ashton and Selena sneak off… 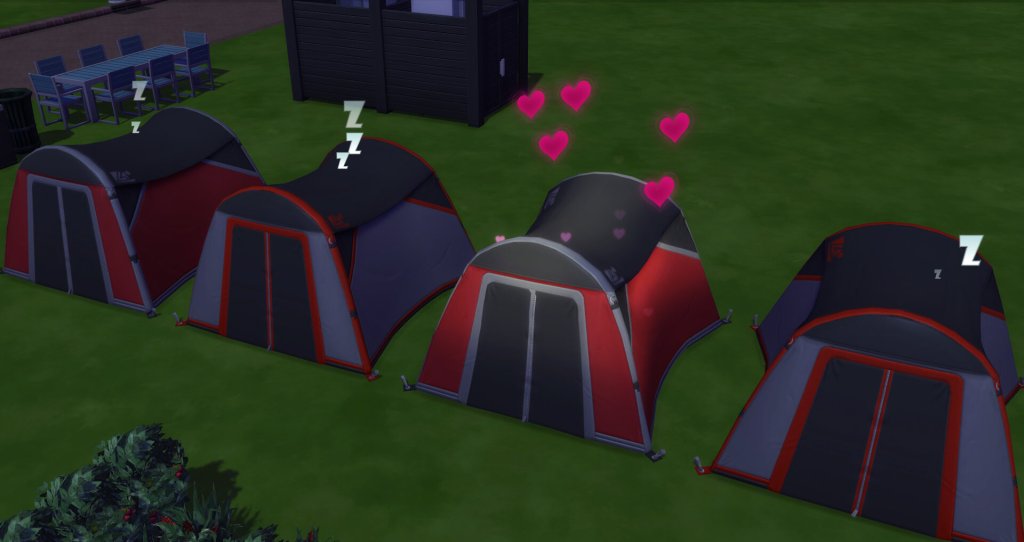 Then Tobias and Cierra.

Meanwhile some creepy freaking vampire sneaks on the lot and cleans out the dirty plate in the fridge!  What the heck man?  Luckily I can make them leave with a cheat in MC Command Center but still it ticks me off.  It intruppted my frog breeding rhythm.

Speaking of frog breeding.  They started with two $10 frogs and have worked their way up little by little as new frogs are collected.  They’re now up to the $125 frogs which I breed what feels like hourly but I know it’s not.  As you can see they get 8 total by the time they are passed to the last sim to breed and sell.  Quite profitable! 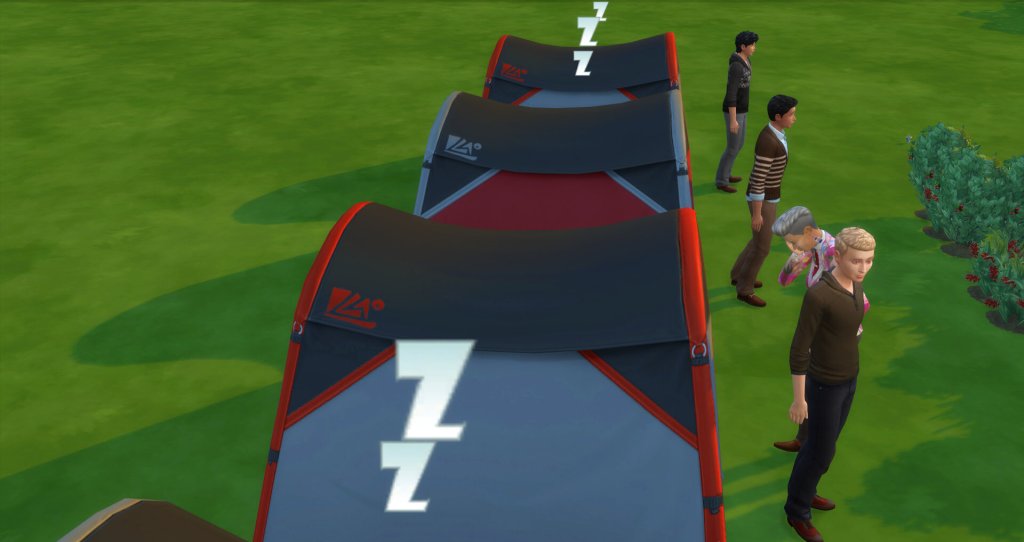 Ugh.  They have been waking up little by little one or two at a time.  It’s hard to manage them all with so many needing everything first thing in the morning.  Especially the bathroom since there are only two!

A little early morning teamwork with the gardener.  They need to plant more now that I think of it and they still haven’t started grafting.  I’m not sure if Leroy can yet but I know Diane can’t.

I wonder what the gardner’s problem is?  I guess he doesn’t approve of her little garden?

He looks very proud of that painting.  They all paint confident paintings most of the time.  Even with 3 inspiring lights!

Wow is she pretty!  If the house wasn’t full I’d move her in!  I remembered that free services isn’t just for gardeners. 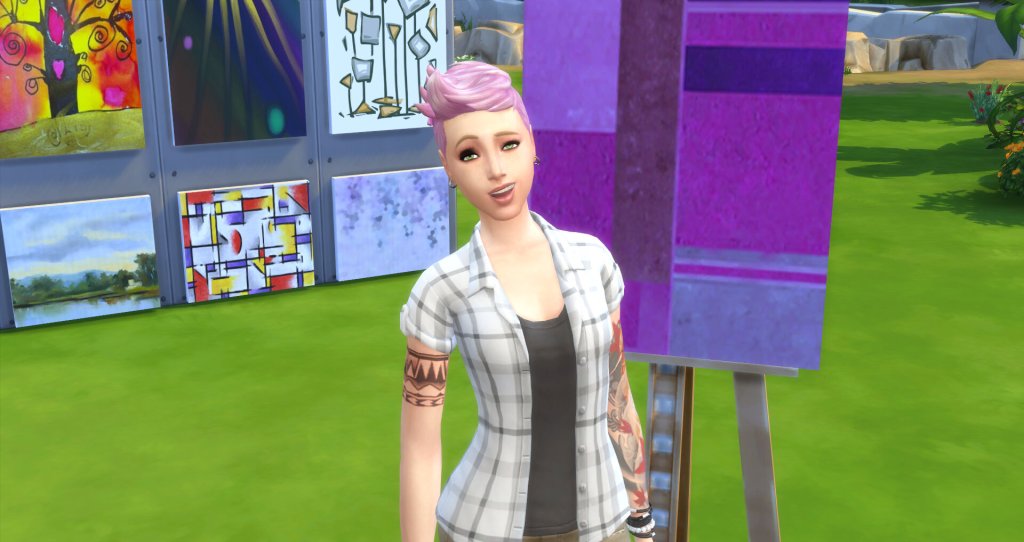 Wow does she look proud of that painting!  And well she should check it out…

The wall of paintings has grown.  I plan to sort them by color and try to determine what room they might go in.

I was shocked when I looked to see how many days this chapter was and it was only 3!  Seriously it felt so much longer!  It’s been 6 days since starting.  My mind is blown because I’m so much happier with the sims that I moved in this time around. The only ones that are the same are Ashton and Leroy and I’ve always had a soft spot for Leroy since house 005.

If you’re curious why they are making so much off of some of their paintings I can only assume it’s because most of them have the marketable and creative visionary traits.  It’s hard with so many to try to get satisfaction points but I’ve been working hard at it.  They almost always have whims for a certain type of painting or just sell a painting or start/finish a painting.  It’s been surprisingly easy getting that many satisfaction points.

You want numbers?  Well, let’s see how my little worker bees did why don’t we?  The non-house is valued at $50,721 half of that is the wall of paintings.  They have $65,143 in reserve which is almost exactly what the house value was of my previous failed house 006 when the twins were born.  That was half the money in twice as long!  Now I just need to graph out the house.  I know exactly how I want the outside to look but the inside floorplan for the house I found won’t work.  All I know is I’m sick of only 2 bathrooms, tents and no stove!