A/N: This chapter is pretty short content-wise because of Khloe’s birthday. 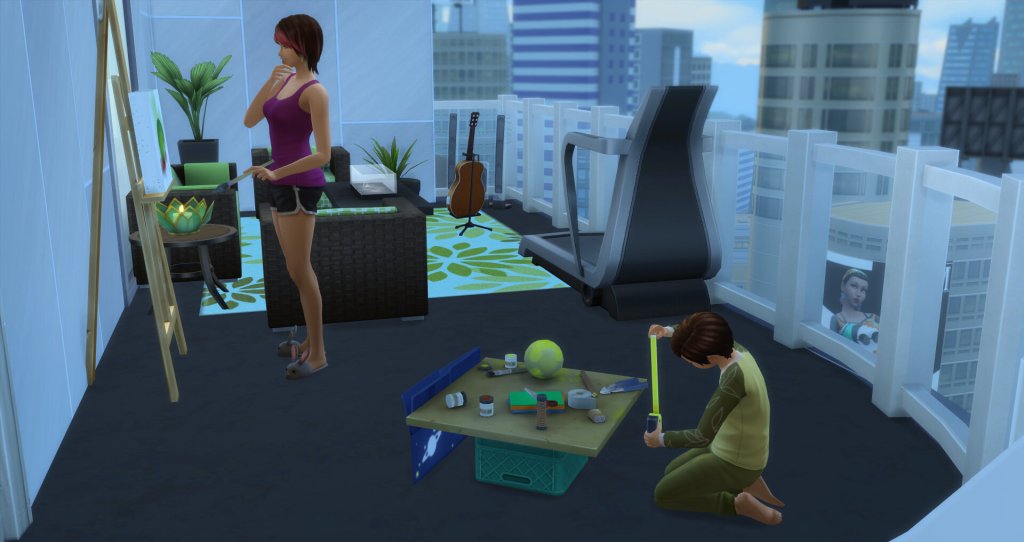 I was wrong in my previous assumption that kids won’t autonomously use the class projects.  They get responsibility from them too.

Although they weren’t my favorite couple by a longshot I’ve warmed up to these two since I’ve started playing again. 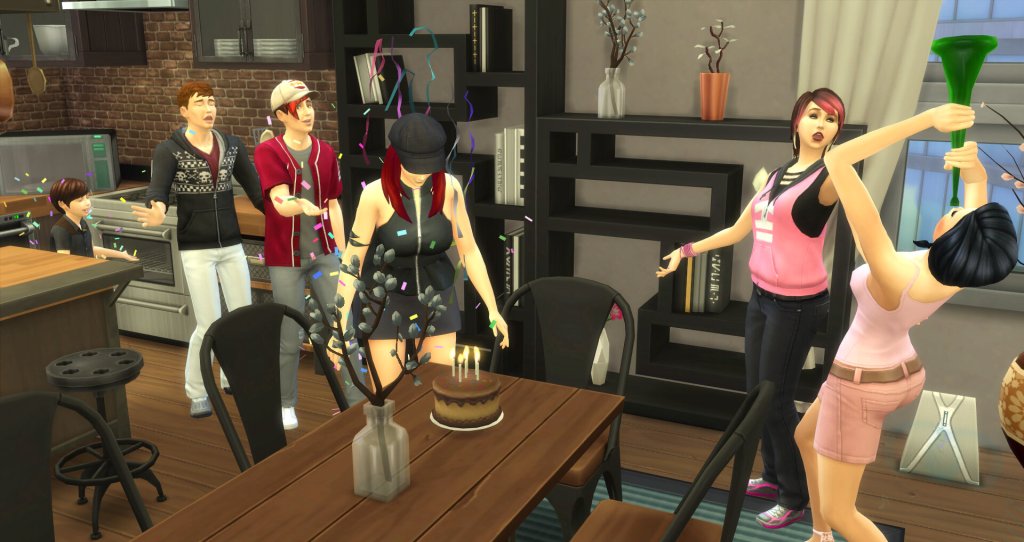 Phoenix aged to adult.  She got an adult makeover getting rid of some of her more risque clothes. 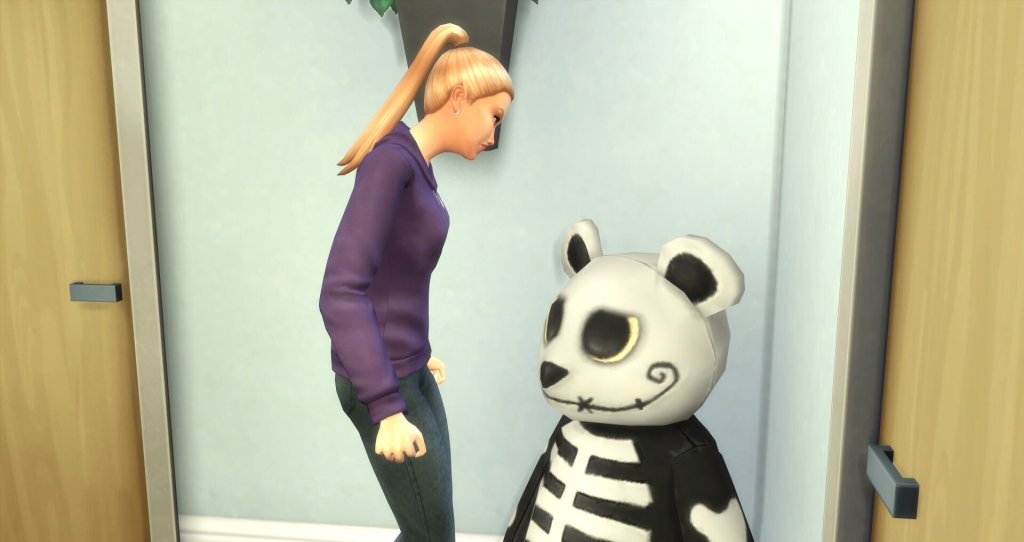 Khloe brought this girl home from school but oddly enough she’s not even in her relationship panel.  She spent her time there punching the bear.

The parents autonomously decided to woohoo while Khloe had been outside painting.  She walked into their room (it’s the only way back inside) and was very embarrassed.  I had her paint again even though she didn’t have a whim for it to keep her busy. 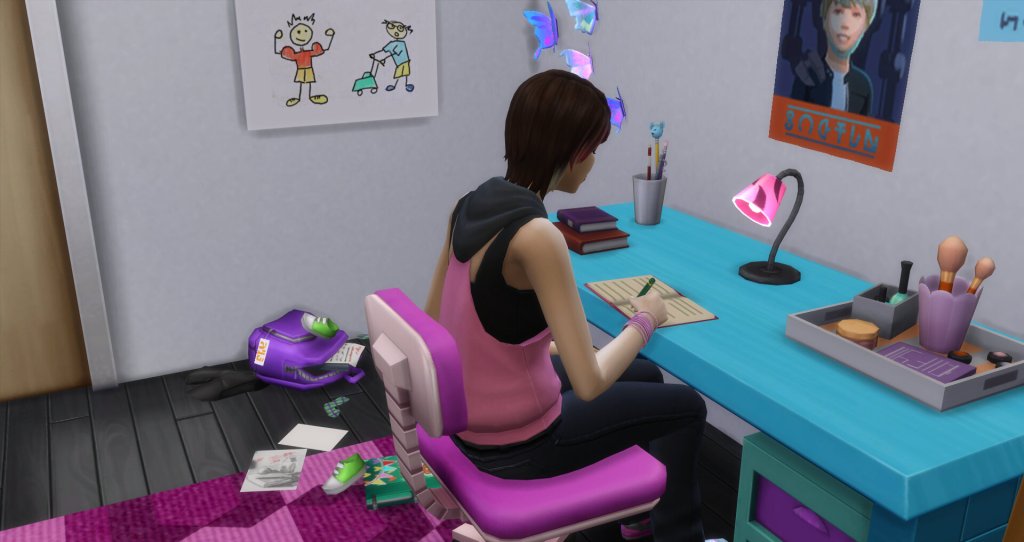 She had a whim for writing in the journal from when she was embarrassed but by the time she got her journal her emotion had changed to sad.

Then it was Colin’s turn to age up.  At this point, I still hadn’t decided who would be the heir.  I rolled all of their traits at once and then figured I’d see who got the better genes.

Although he’s cute, Khloe has a better look to her.  That coupled with better traits made me choose her. 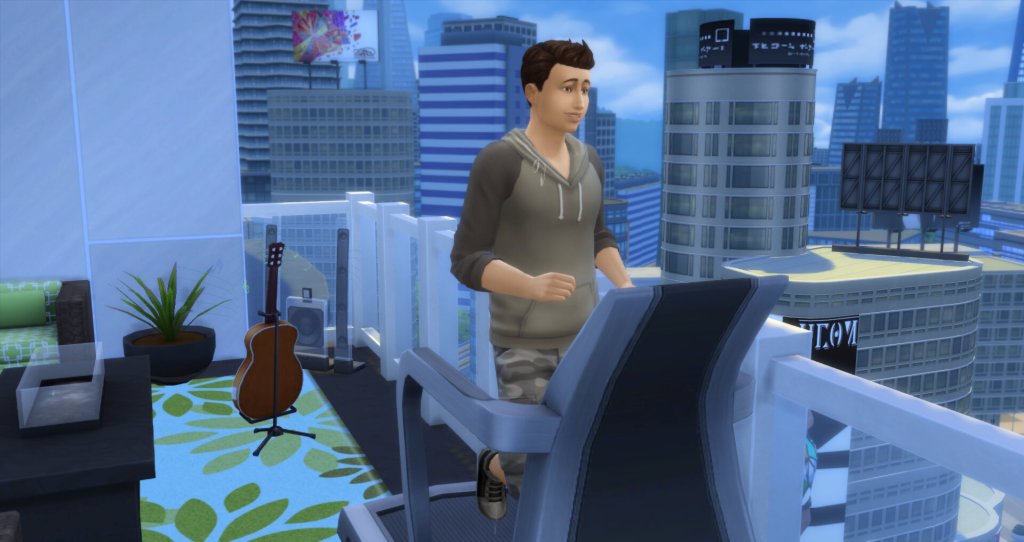 I changed his aspiration over to Bodybuilder and he’s been getting lots of exercise whims.

I re-decorated his bedroom which turned out to be a waste of time because they ended up moving after Khloe aged up.

Still uses it autonomously with an extra bonus:

Luckily with the painting skill and the painter extraordinaire aspiration, Khloe has been getting lots of painting whims.  I found a new apartment for them but they need more money for it. 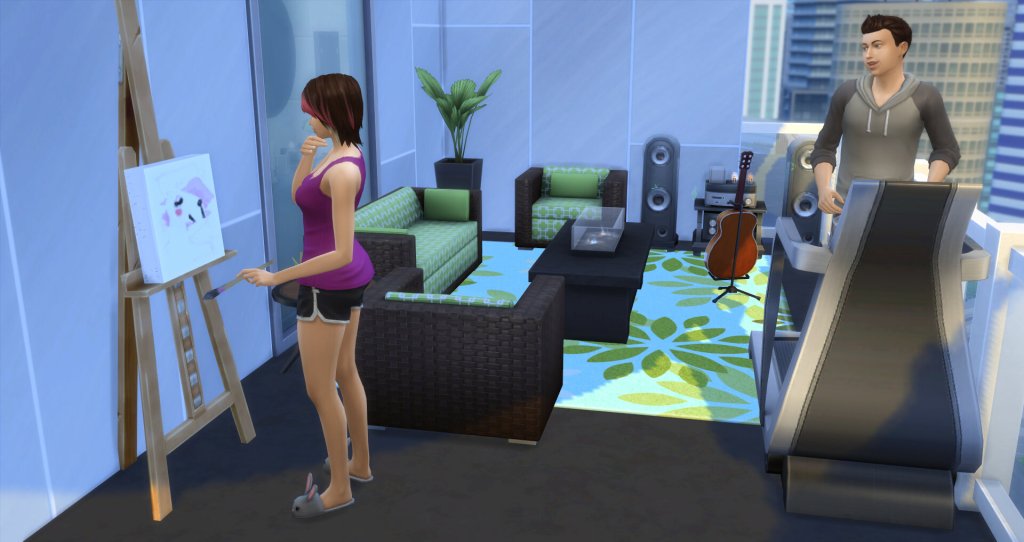 The two kids spend a lot of time out here.  I’m going to miss this balcony.

The romance festival was in their neighborhood and she got a whim to view plants there.  I had this genius idea to have her harvest dragonfruit and have an indoor garden to make money.  The problem is there’s never a whim to harvest a plant.  So I don’t know if I’d consider that cheating or not.  I decided against the plan for now. 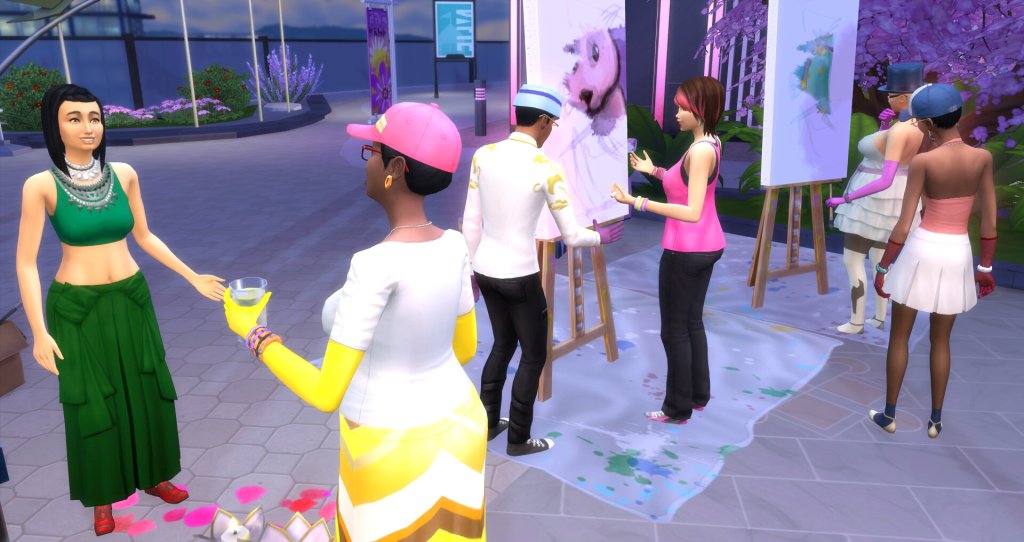 I don’t know why I decided to have her do a large painting while she was there.  It ended up being after her stupid 9pm curfew that I’d forgotten to change.  She couldn’t put the painting into her inventory so she had to finish it.  In the end, her responsibility went waaay down.

Then it was time for Khloe’s birthday and young adult makeover.

Phoenix’s whims so far.  In comparison, Tate had twice that.

Khloe’s whims so far.  I think she’ll do much better than her mom. 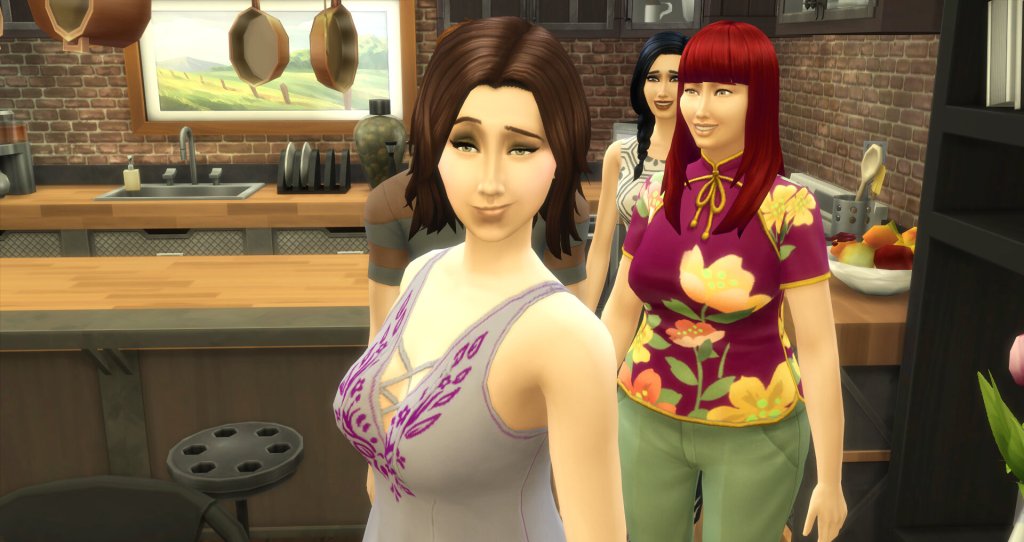 So here’s her new look.  I tried to get a hair that looked similar.  She still looks very different but I think she’s so pretty.

Then the weirdest thing happened!  The siblings were up on the balcony and hugged then started fighting!  I swear they could be best friends that’s how high their relationship is!  It was so weird.

Geeze, what on earth?

Then they started arguing.  Once the party was over I decided to just end the weirdness and move them. 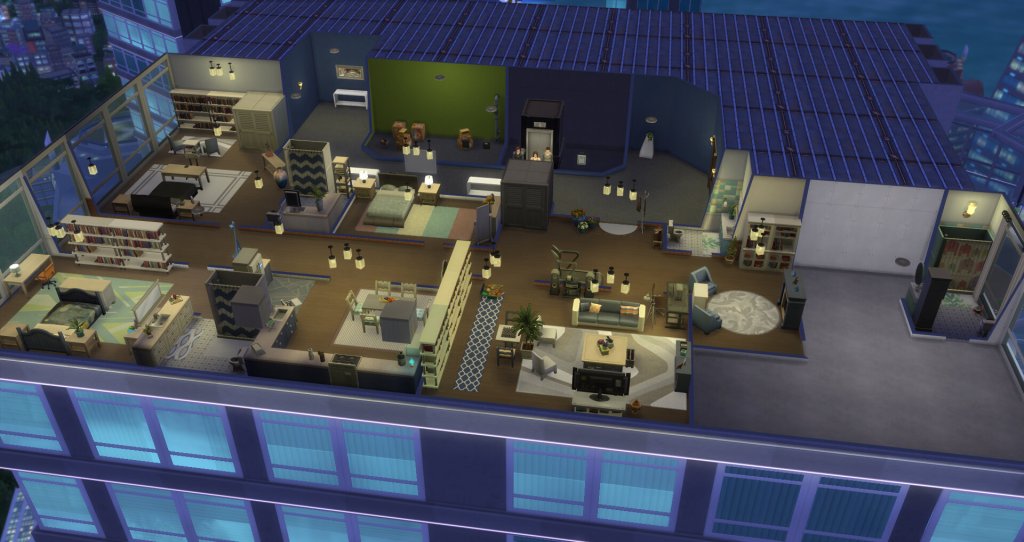 Here’s an overview.  The empty space on the right was a child’s bedroom, toddler room, and playroom.  They couldn’t afford everything so I decided to just go ahead and delete them.  The playroom is saved to my library so I can add it easily again when there are kids again.  There are 3 1/2 bathrooms.

Here’s the entryway.  I didn’t bring much from the old place and I didn’t add a whole lot either.  I’m sure I’ll change and add here and there as I play.

The living room.  I added a computer desk, stereo, and the school project.

…and the other side of the kitchen.  I couldn’t figure out if that gap in the wall was intentional or if there were supposed to be doors there but I assume it was intentional.

Colin’s room.  It’s actually quite big.  There is a sitting area behind the camera.

And Khloe’s room.  I thought that the art stuff was cool because she’s going to paint instead of having a job.  I just don’t see the point when she needs to work on whims.  Her parents and brother will work though.  I love the view from this apartment.

One of the reasons that Phoenix had such a low whim count is because she had Khloe so early.  She’d just aged to young adult.  I think Tate was close to aging to an adult when Phoenix was born.  Also, Phoenix had terrible traits that didn’t lend to good whims. And lastly but most likely the biggest reason, Khloe was my first toddler in Sims 4 and I paid much more attention to her whims than I did anyone else’s in the household.

I’m trying to figure out how I want to go about finding Khloe a mate.  I’m kinda sick of the whole go places and search the area thing. I wish so much that Sims 4 had online dating or the matchmaker.