It’s funny what whims I didn’t even know they’d get before they had something in the house.  For example, the genius trait makes them want to play cards when there’s a game table. 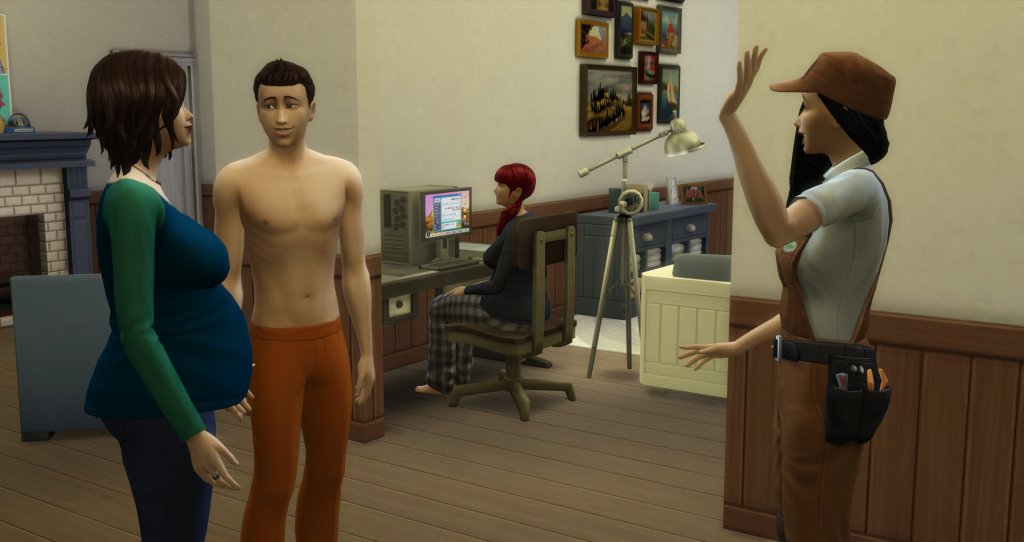 Apparently, they got a new landlord.  No clue what happened to the old one but she came knocking on the door so they invited her in and chatted for awhile. 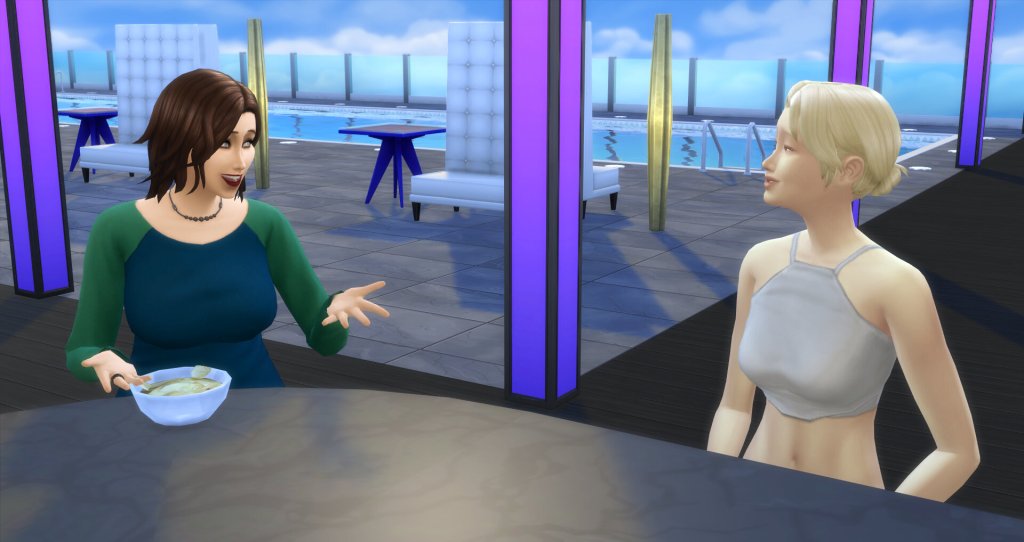 Saya invited Colin on a date.  It’s not weird that he brought his sister is it? 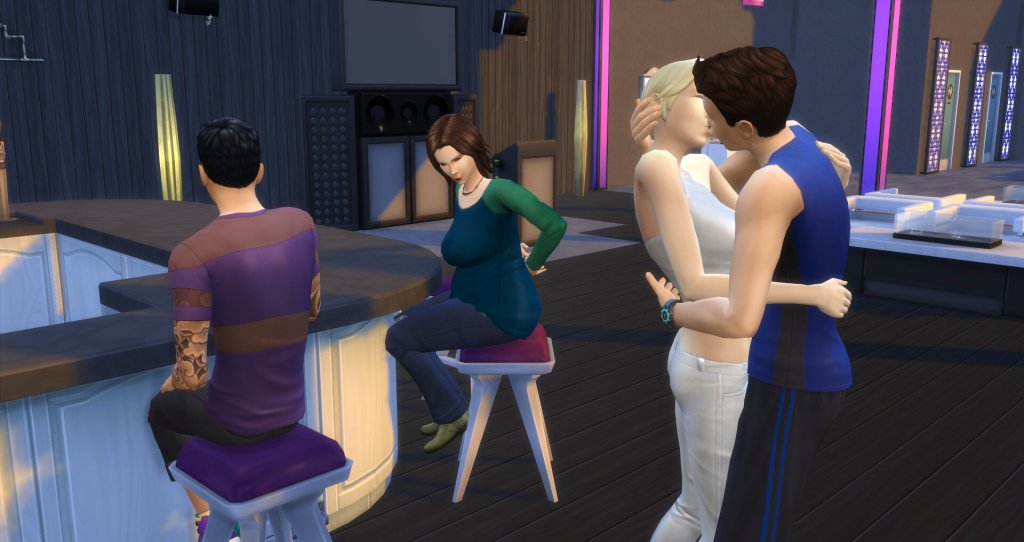 They don’t seem to mind.

I followed both Khloe and Colin’s whims while they were there.  I was surprised I was able to have them do a duet together.  Usually whoever they’re there with doesn’t ever show up as an option.

This was funny.  Saya feels the baby, Colin watches her and then…

Okay, so it’s not try for a baby but they don’t get that unless married.

They headed back to the house to try their luck.  Colin wants to be a dad! 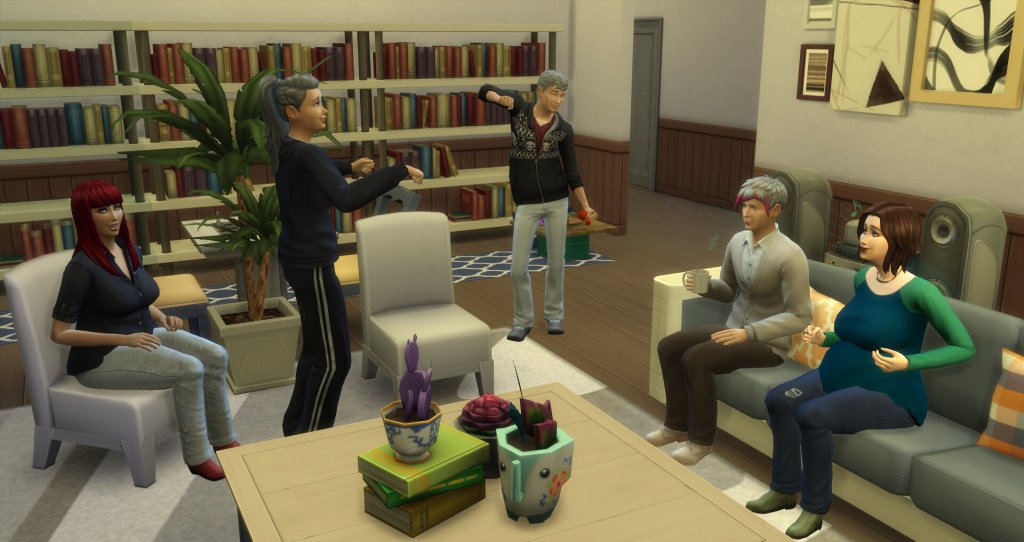 Aunt Rae and Uncle Brody are there constantly.  Oddly enough though the friends with apartment keys don’t show up much anymore. 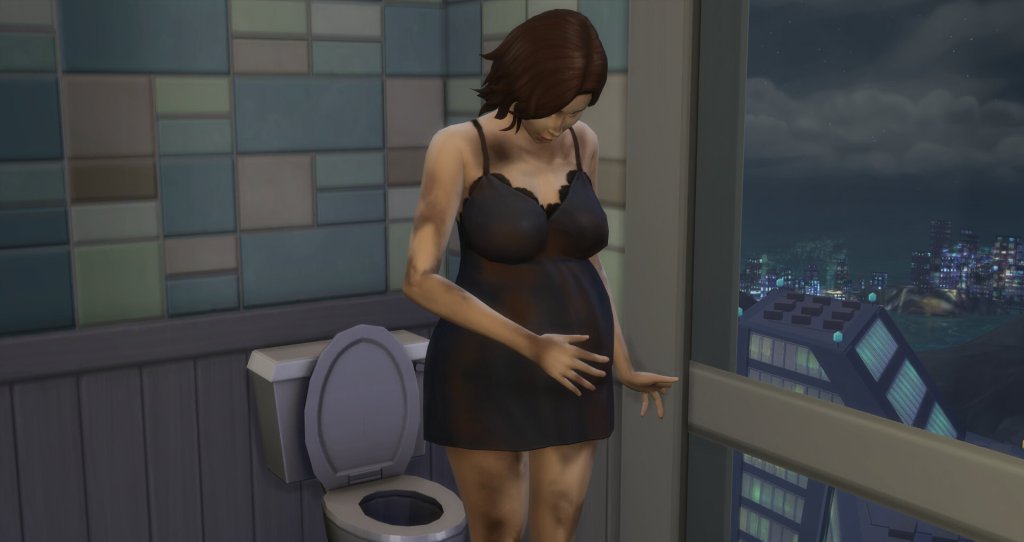 She seriously just stood up from the toilet and peed herself.

She was so embarrassed she cried in the closet and hid under the covers in her bed.  Poor girl’s miserable. 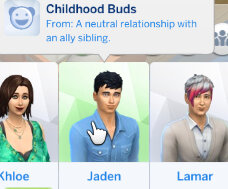 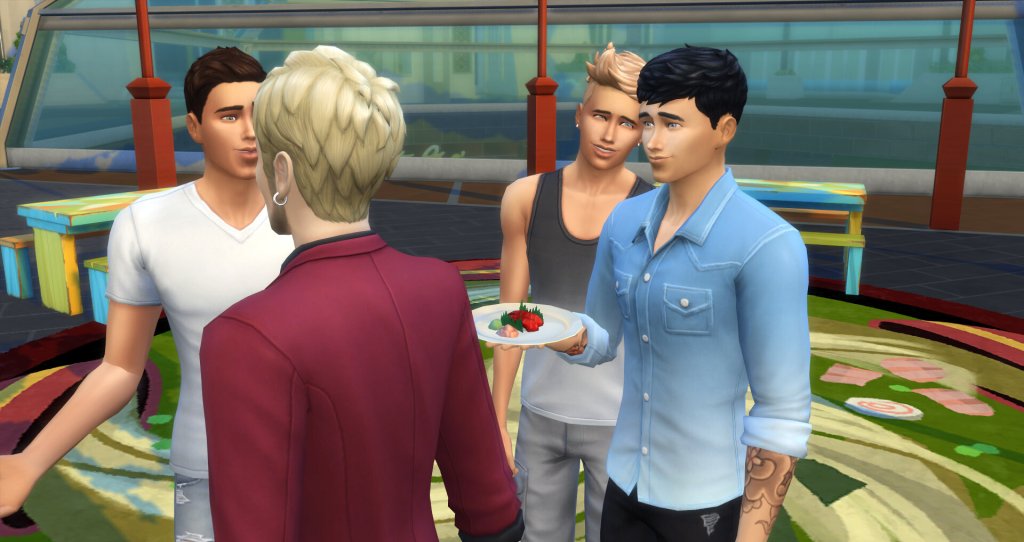 An ally sibling?  What’s that?  Apparently, that’s what Jaden is.  I think he’s the only one that Justin used to live with since he was a teen that he was actually friends with.  They caught up and he gave him an apartment key.  I looked and the isn’t an ally with any of the other guys. 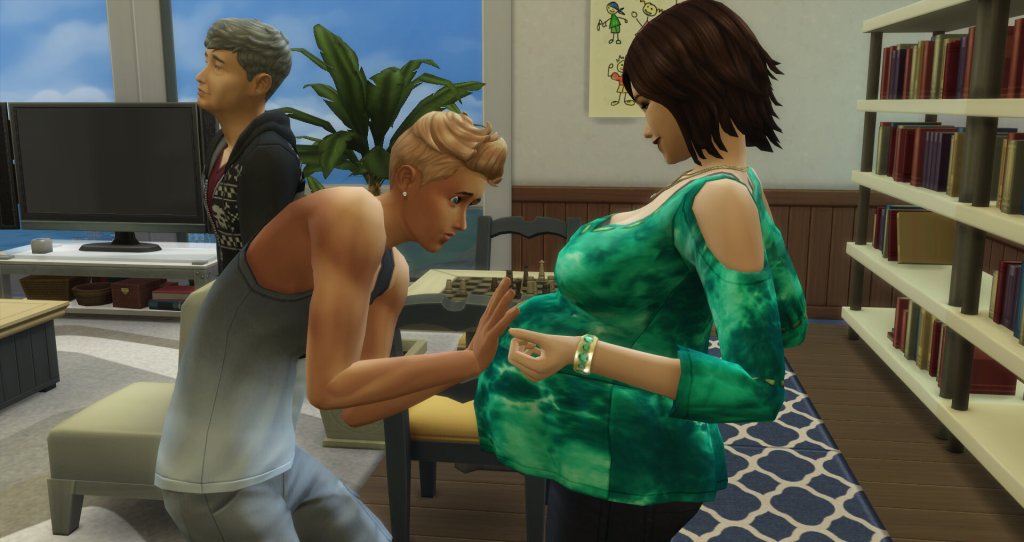 Yet another stranger arrived at the apartment.  This lady walked in, hopped onto the treadmill, ran for awhile, and then got off and left.  Nobody could ask her to leave because it said she’s already leaving!

All of the friends went to GeekCon together.

Everyone just hung out and enjoyed the festivities.  It’s so nice to have a group of friends this generation.

When Colin saw Saya he was a bit shocked even though they did try for a baby.  She’s quite big already! 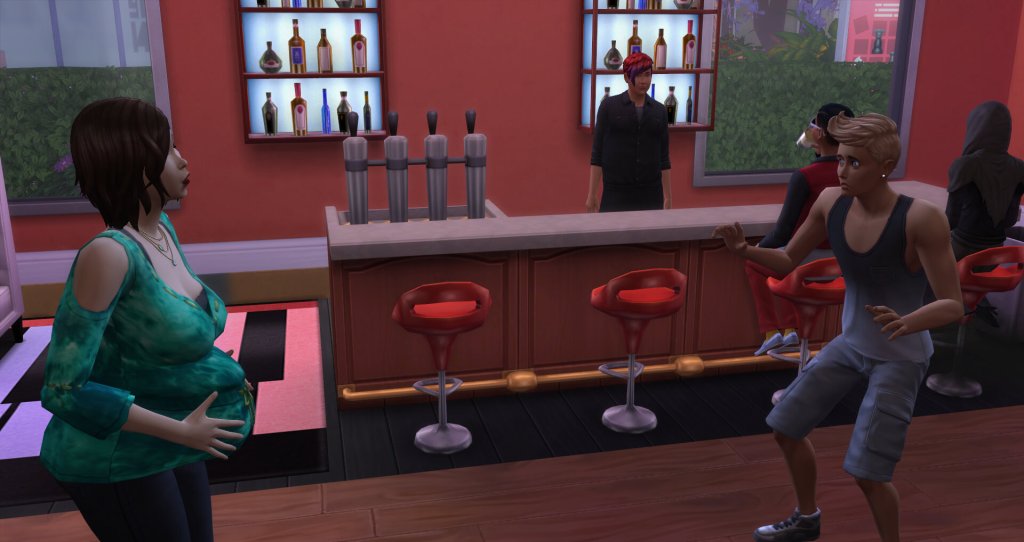 It’s a girl!  Now, her name is Brin.  Which is hilarious because when I decided on the name I didn’t remember their last name is Yin.  I named her after a guy in the book series I’m reading right now.  Don’t worry, he would be thrilled to have a girl named after him I’m sure!

Back home it’s time to check the toes and fingers.  Everything’s there.  Can’t wait to see who she looks like. 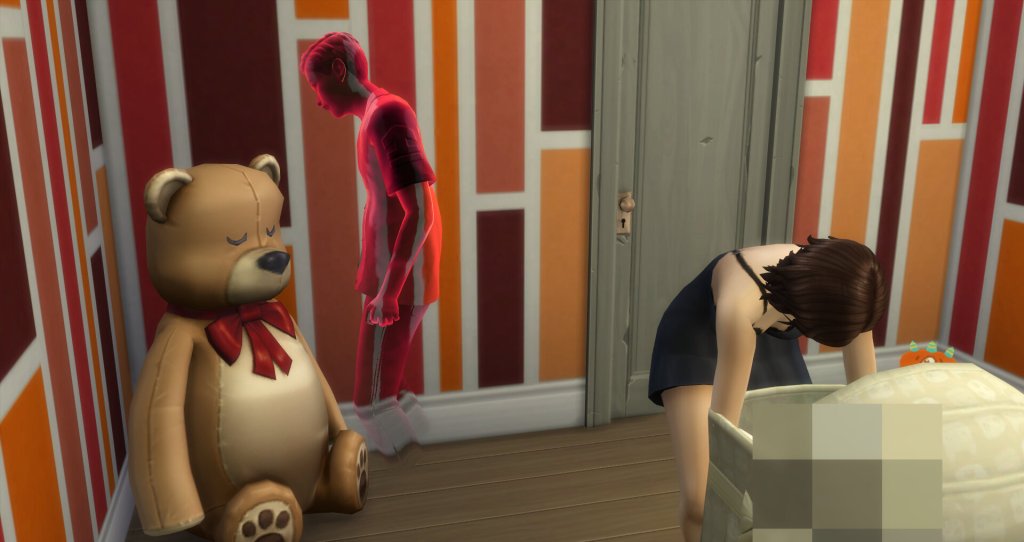 Later, Grandpa Tate showed up and yelled at the Blarfy while Khloe was changing Brin’s diaper.

Ugh, I’m thinking the whole caterer idea is worthless.  He barely cooked and then he started a bunch of meals he didn’t finish.

Hahaha!  I loooove this costume!

Looks like the responsibility thing helps in his job!

Erm, yea.  All three of them ran to the baby at once.

I didn’t realize how big of an age gap there was between Phoenix and Lamar.  Not only was he older but she didn’t age while pregnant making her even younger after two kids.  Anyway, time for elderhood!

I actually think she looks better as an elder.  So did her dad. 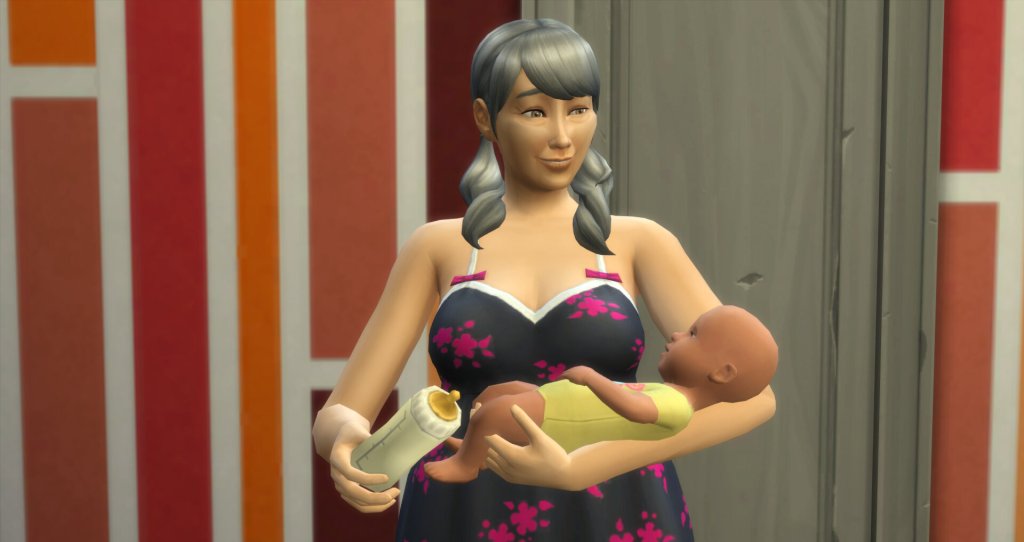 A little late night feeding since she was the only one still awake.

He looks either perplexed by her or in awe.  We’ll go with awe. 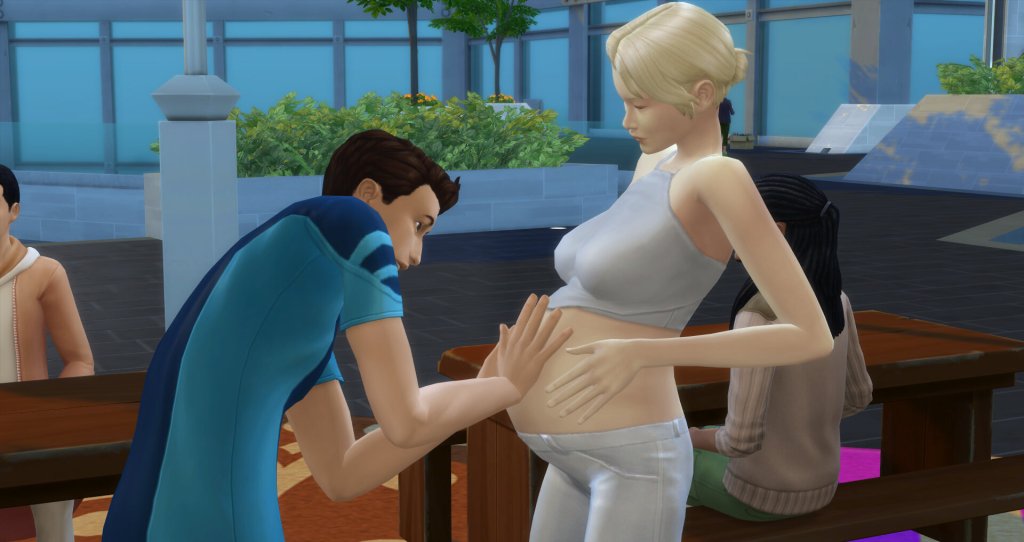 Someone else is going to be a daddy very soon. 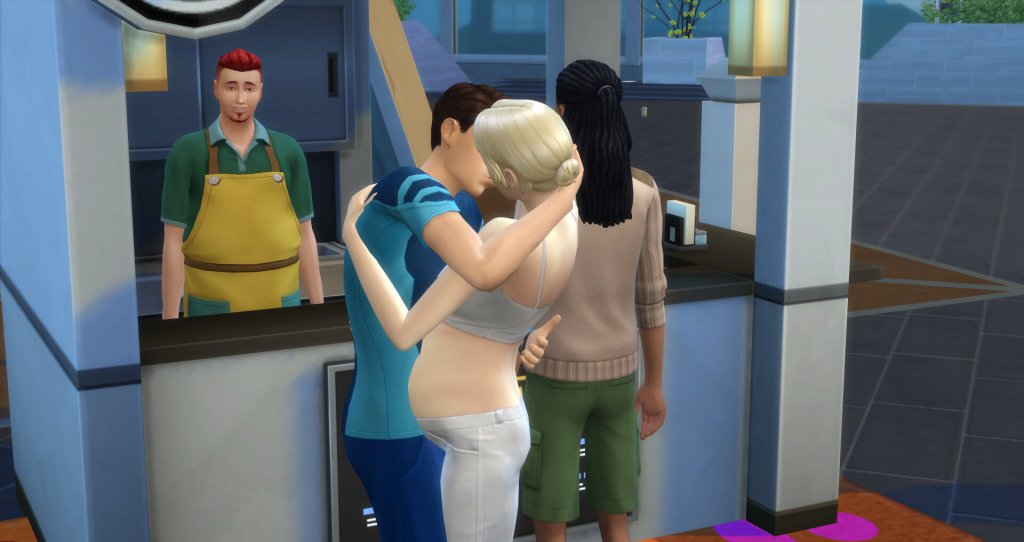 Not much longer.  I’m going to move her into the apartment next door. 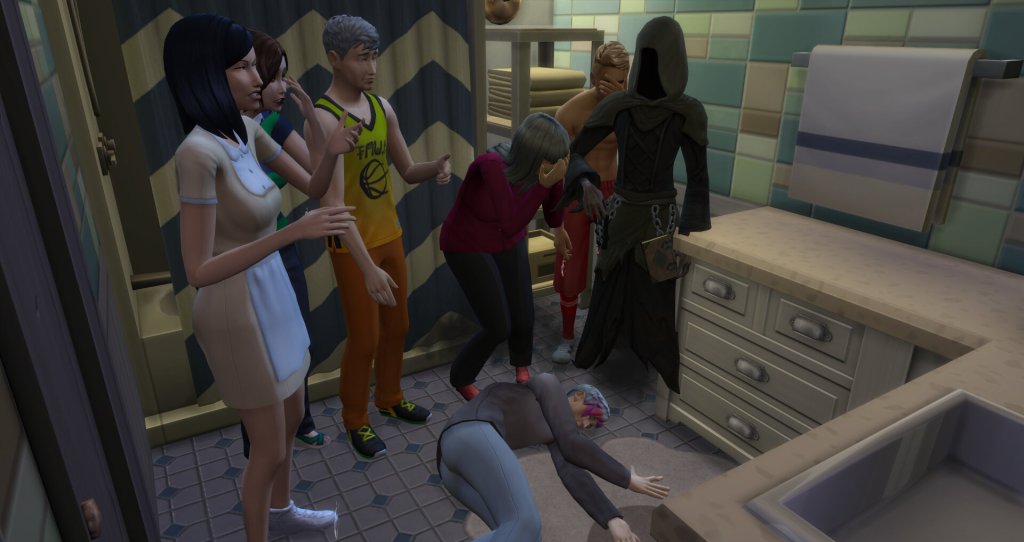 It’s pretty sad that the day after Phoenix aged to elder poor Lamar passed away.  Everyone crammed into the bathroom including the maid.  Only Colin missed it since he was on the street with Saya.  Note from the future: I think this is the last time I remember seeing the maid!  I guess this is why she hasn’t been showing up.