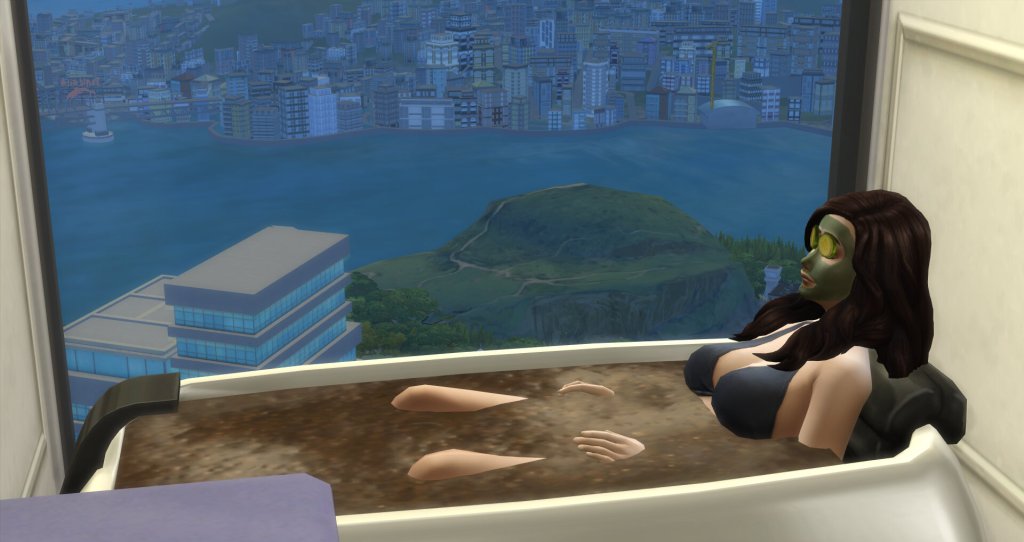 Ah, it’s good to be the heir!  Beautiful bathroom view of the city and a little alone time.

I switched Khloe back to the Painter Extraordinaire aspiration because they had to “borrow” $20,000 to afford this apartment because I did the math wrong.  I’d considered getting her a job to give her something to do but she’s going to be an elder soon and that seemed cruel.

Jackie had gotten this whim a couple of times as a teen too.

We find the elusive Izumi downstairs doing whatever tourists do in this game.

It doesn’t take long for them to get into a fight!

I’d thought this lady looked nice and Jackie wanted to make a friend.  Perhaps she would be a good friend to hang out with.  Or not. For one, her name is Oumaima.  I had a terrible time spelling Aadhya in the last generation.  That would be even worse.  And second, she’s a klepto so when she visited the house she’d be stealing stuff all of the time.

Then I saw this guy, Kengo.  Yet another annoying name that the game gives tons of random sims.  I passed on him because he’s evil and jealous.  I’ve already got a jealous sim to deal with in my Apartment Challenge.  I don’t need another.  And having another evil sim seems redundant.  Guess it’s time to head back home.  She did make friends with Kengo just to complete the whim.

Oh, we know who this will be!

Jackie invites Marc over for a little chat.  She dismisses his goodness. 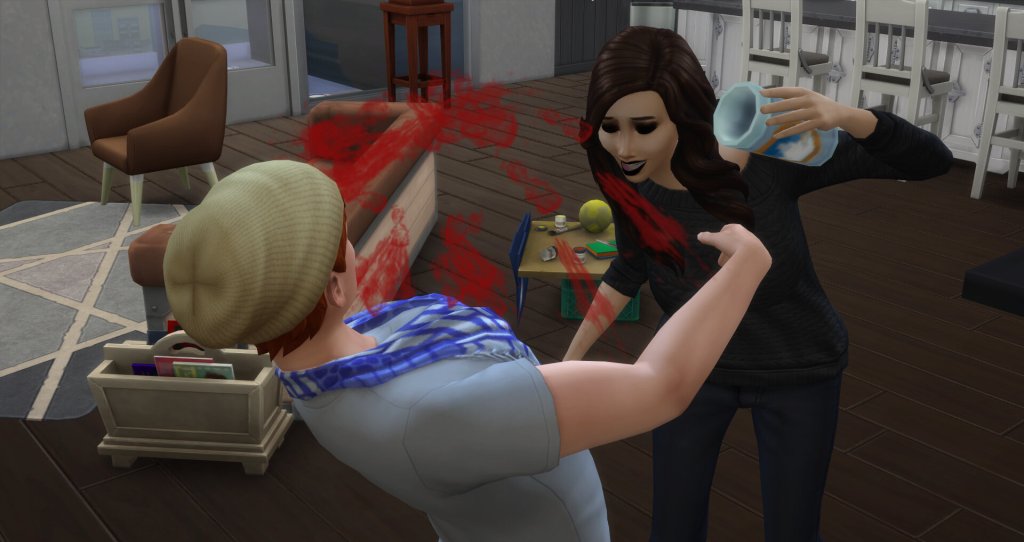 Throws a drink in his face.

After some arguing and implying his mother is a llama she declares him her enemy!  She doesn’t even give him the respect of standing to do so.

Err, yea.  So I don’t have any idea why sims keep kneeling all of the time.  I think it started when toddlers were released.  She looked really goofy declaring him an enemy kneeling.  Then he kneels too when she asks him to leave! 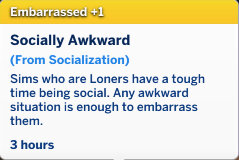 I noticed this after he left.

Yay!  Someone’s using it.  Sooner or later the thrill of this thing will go away.  Most likely when I play a different challenge and can actually tell them to use it.

Then it’s Justin’s birthday.  I tried having it before the teens went to school but the game froze like it’s been doing at school time and they left.  Grr!  I should have had them take a vacation day.  Poor Justin.  His wife is freaking out because she’s hungry and Jackie is shouting forbidden words like she does constantly since she aged up and got the evil trait.  That’s getting old quick.

Khloe tosses some confetti and leaves to find something to eat.  Justin is not liking elderhood.  I decided to wait to update his wardrobe because the next day is Brin’s birthday.

Remember how I’ve said they look alike?  I’m sure whoever made them used the same template for both.  That’s why Hanna and Jackie look alike even though they technically weren’t related until I made Justin and Johnny brothers.

Jackie wanted to become flirty.  The pixelation made the pic look weird.

Uh, she knows no one to woohoo with!

Oh well, maybe she’ll luck out and find some hot guy to drag to the closet.  I haven’t taken any sims here since the second generation.  I think it’s a Maxis made nightclub.

The bartender, Masato was cute so she started chatting him up.  Sadly, he’s good so it would never work between them.

She’s distracted temporarily by her father barbecuing in a nearby picnic area.  Once talking to him is done she heads back to the nightclub.

She wanted to dance.  Uncle Brody and great-grandpa Tate were there dancing their ghost booties.

She talked to his guy for a little bit.  His name is Tim.  Romantic, Snob, Perfectionist.  He seems okay but didn’t wow me.

Once again she’s distracted by some odd radar that seems to sense that somewhere in the neighborhood there is someone she knows!  Time to quickly cloudgaze with Saya and make her way back to the darned nightclub.

She sees her brother Donnie there.  She hasn’t really seen any of her siblings except Hazel since she was adopted.  Which is kinda sad.

Then, yet again, she wants to be alone.  I thought it might be nice if she has a peaceful place to be alone in so she doesn’t always have to lock herself in her bedroom and bathroom.  This is Yoga Retreat by EPaffrath.  I stuck it on the island in Windenburg.

A little steam and she’s right as rain.  Also, she kept going to the bathroom sinks and wash dishes would pop up.  She wasn’t doing anything autonomously and wasn’t getting any whims so that was the end of the spa.

I decided that it would be interesting if she spent more time with the extended family.  You know her dad, Hazel, and Donnie.  The guy in the black jacket is her brother Yosef. 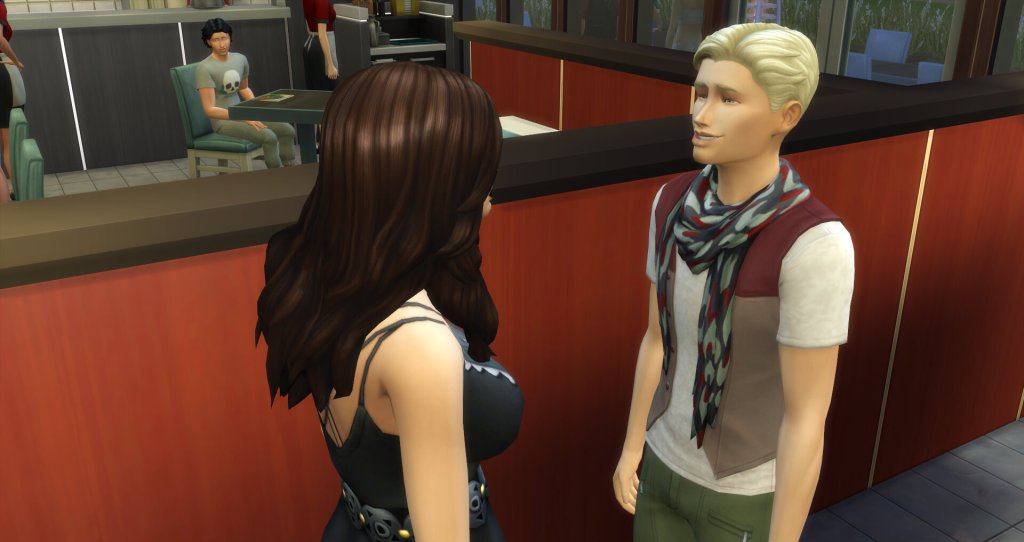 While they were waiting for the food I noticed this guy’s name and realized it’s one of her other brothers, Gustavo.  I think she has two more that we haven’t met yet but when I try to invite them somewhere or travel with them they aren’t on the list.

My faith in the quality of the food in this restaurant has dropped considerably!  Yuck!

What are siblings for if not to embarrass?  Also, random sims kept putting food and drinks on their table.  It was driving me nuts.

Wow.  Donnie was really fast getting her pregnant!  Jackie had just gotten home from the restaurant when this popped up.

In the morning it’s time for our Brin to age up as well.  At least most of them are paying attention this time. 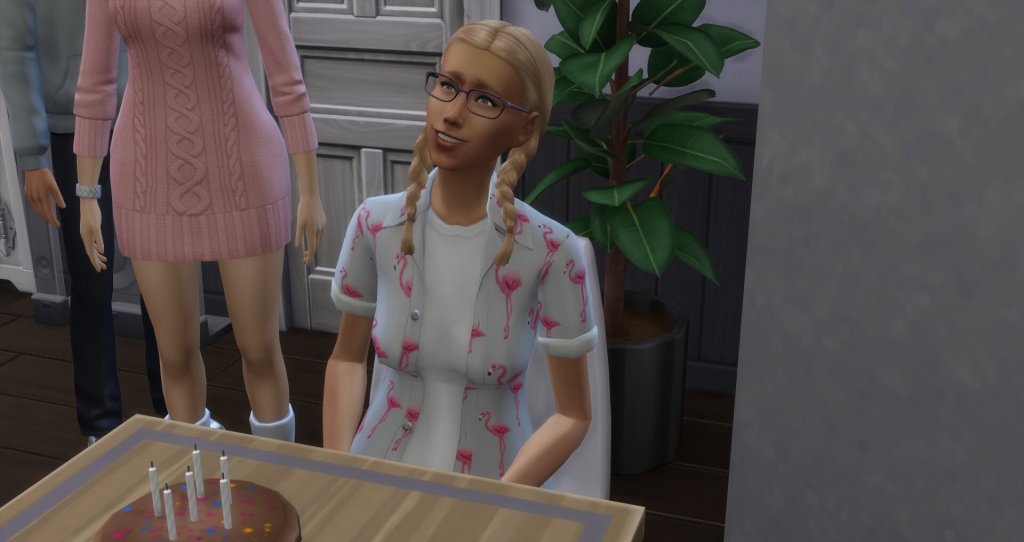 I decided to give her a bit more of a geeky look to go with the goofball slob look.  I also changed a few of her outfits that I didn’t like much. 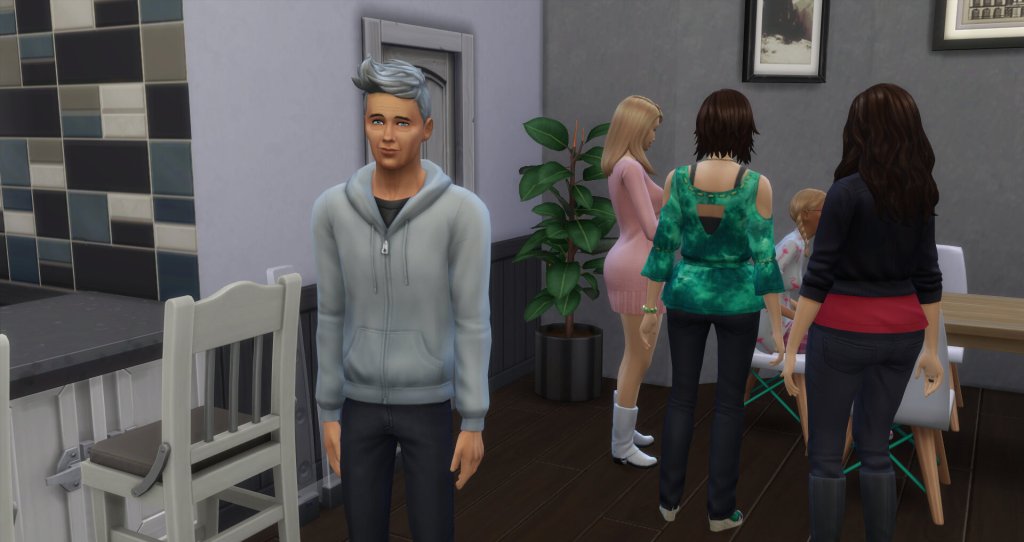 Justin also got a makeover into what a sim of his age should wear.  He looks so much like Johnny now that they’re both grey it’s weird.

I really want to go through all of the townies and give them makeovers and delete the ones that don’t have a family tree.  I’m just sick of the townies looking so goofy and having such odd names!