Look at all of the presents the boys got for their birthday!

Kaeden wanted to perform a puppet show and Jaiden wanted to watch one so it worked out really well!  It’s not often that whims match up like that.  Hanna decided to watch as well.  The puppet show seemed to take forever this time and I was starting to wonder if I’d have to cancel it out.  Right when I was about to he’d stopped. 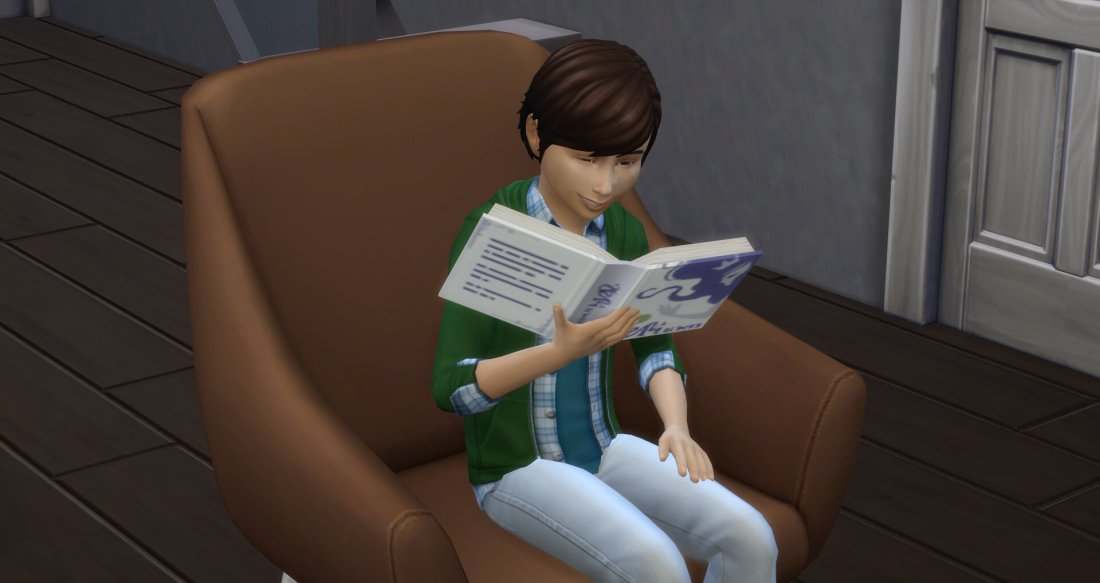 While his brothers have fun upstairs Quinten buries himself in a good book. 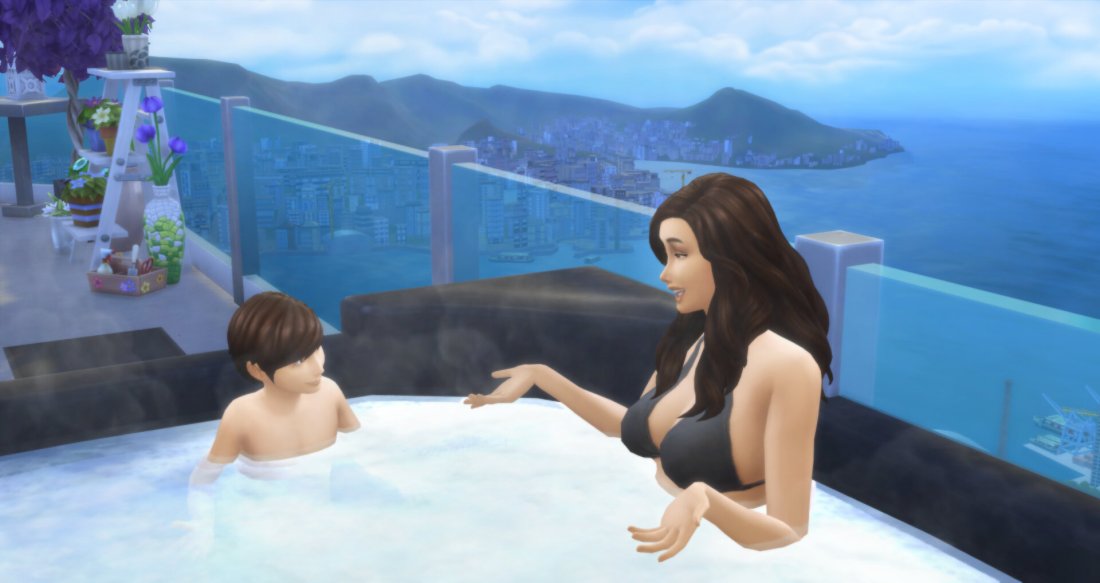 Then he hops into the hot tub with mom for a chat. 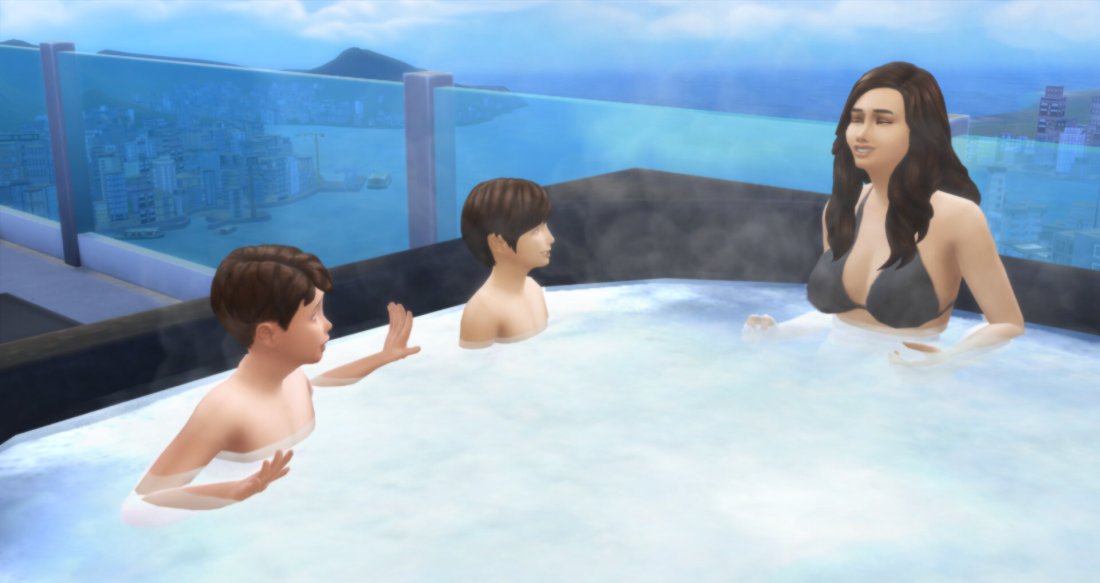 Shortly followed by Jaiden telling some jokes while they soak up the water and the beautiful view. 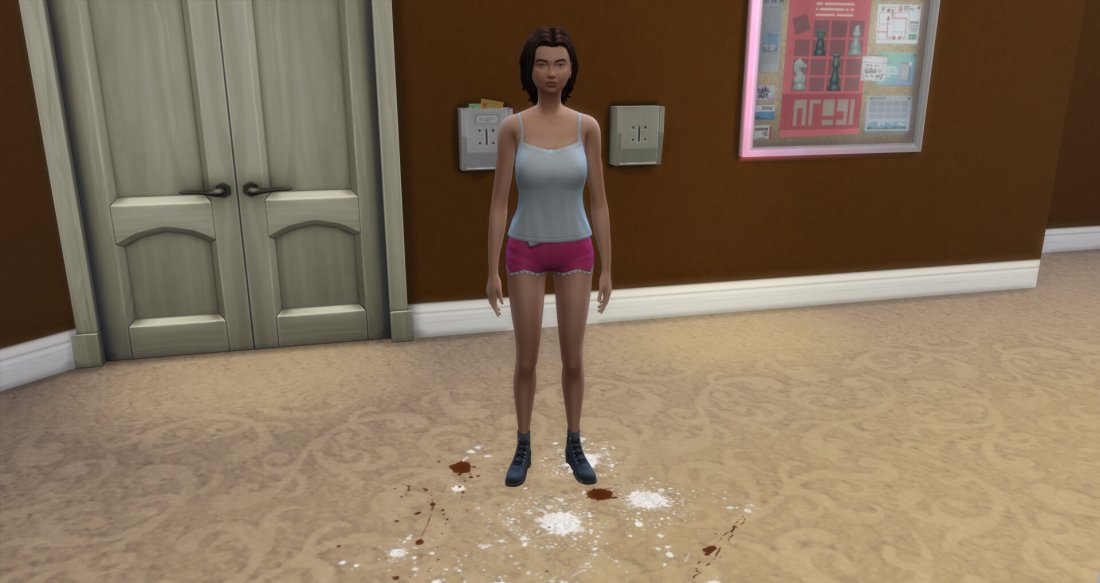 Uriel’s step-daughter/Jackie’s niece Adelynn was out in the hallway making a mess like usual when there was a flash of light and she aged to teen!  I wasn’t fast enough on the pause button, unfortunately.  Poor girl started bawling in the hallway about her missed birthday before returning to their apartment.  At least there won’t be any more messes.

Jarrod the maid seems stumped by the fact that he can’t put away the llammacorn toy that I increased the size of so that it could go on that shelf.  I see it in different sim’s ques all the time like they’re just dying to put it away and they can’t.

Poor Caleb Vatore.  He looks so miserable and unvampire like.

Brin was telling jokes to Kaeden. 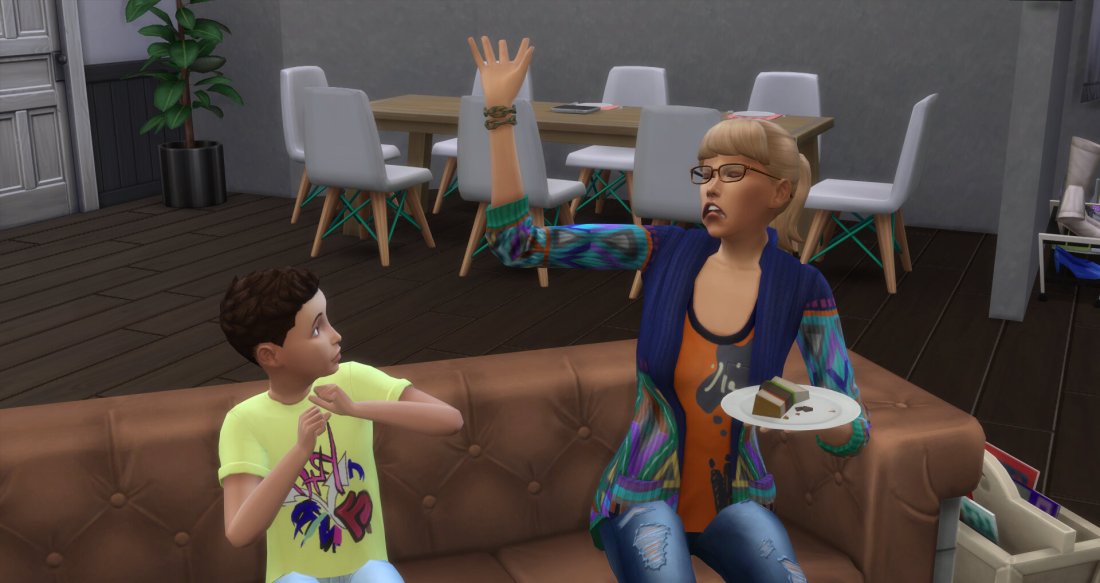 But got a little enthusiastic about it and scared the poor kid!

I spent like 5 minutes laughing hysterically about that face!

Uriel must have really wanted to escape his apartment because he kept finding reasons to invite himself over here.  Jackie had a whim to help Quinten with his homework so he was the only one that got any done that day.

Kaeden was worn out from Brin’s jokes and decided to take a nap in the hot tub.  So not safe!

Jackie had a whim all darned day while Curtis was at work to be mean to him.  She implied his mother is a llama.  He just made this face like “see what I have to deal with?”

Brin spent an entire day writing jokes on the computer so she could get a promotion the next time she works.  Unfortunately, I kept forgetting her and her needs were terrible once I remembered to check.  Then, I saw movement out of the corner of my eye… 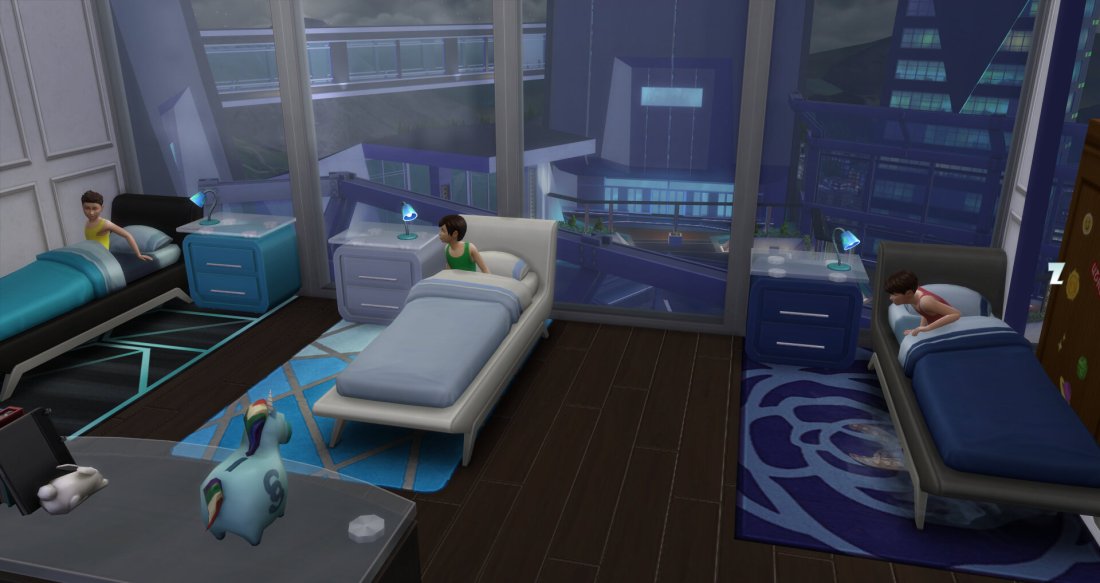 Ugh!  How could I forget monster lights?  This is like when they were toddlers and the neighbor noise woke them up at night! Quinsidentally that hasn’t happened again since they’ve aged up.  Odd eh?

I had the other two boys nap while their scared moodlets ran out but Jaiden wasn’t very tired so he chatted with Brin… through the bookcase.  *sigh*

After their naps, the boys were hungry but not very tired.  There they met Tate.  I realize now that since Jackie was heir the family technically isn’t related to Tate anymore!  Awe.  He can be a surrogate grandfather figure.

Jackie had a whim to eat and learn experimental food.  I knew Hell’s Kitchen had some and everyone woke up hungry so off they went. 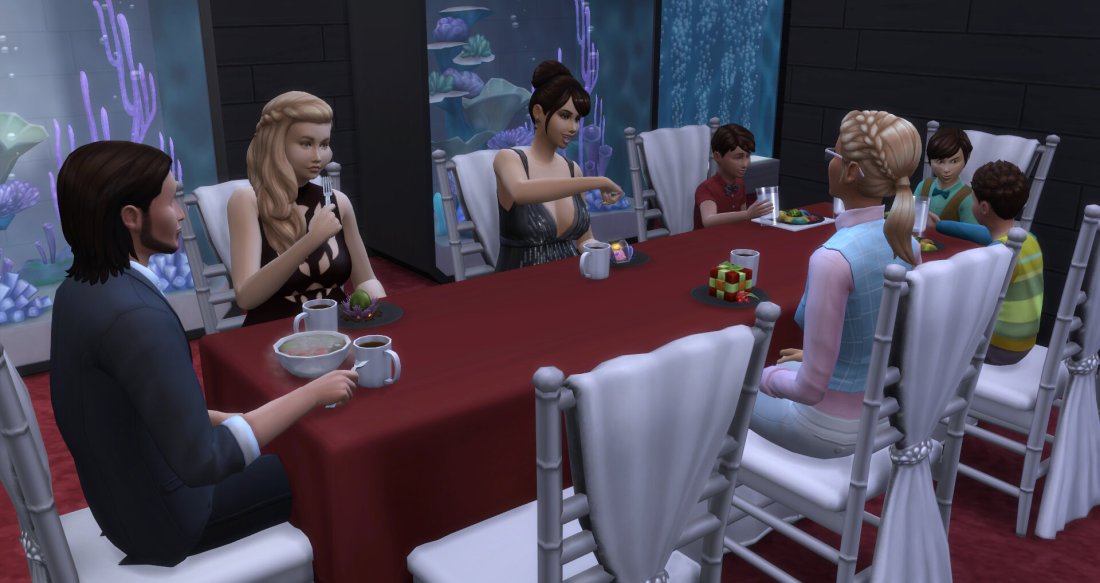 Yum.  The boys ended up having to cut out without finishing since they were late for school and Curtis left soon after finishing his meal to head to work. 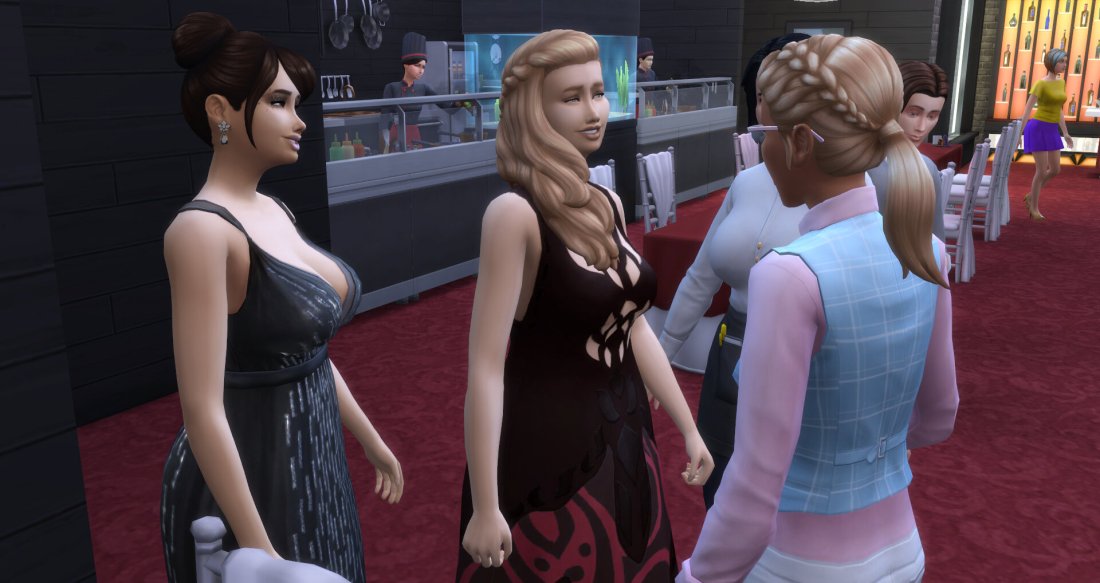 The cousins hung out for awhile chatting while I tried to think of somewhere else they could go but just ended up taking them home.

I forgot you need the darned chef station. 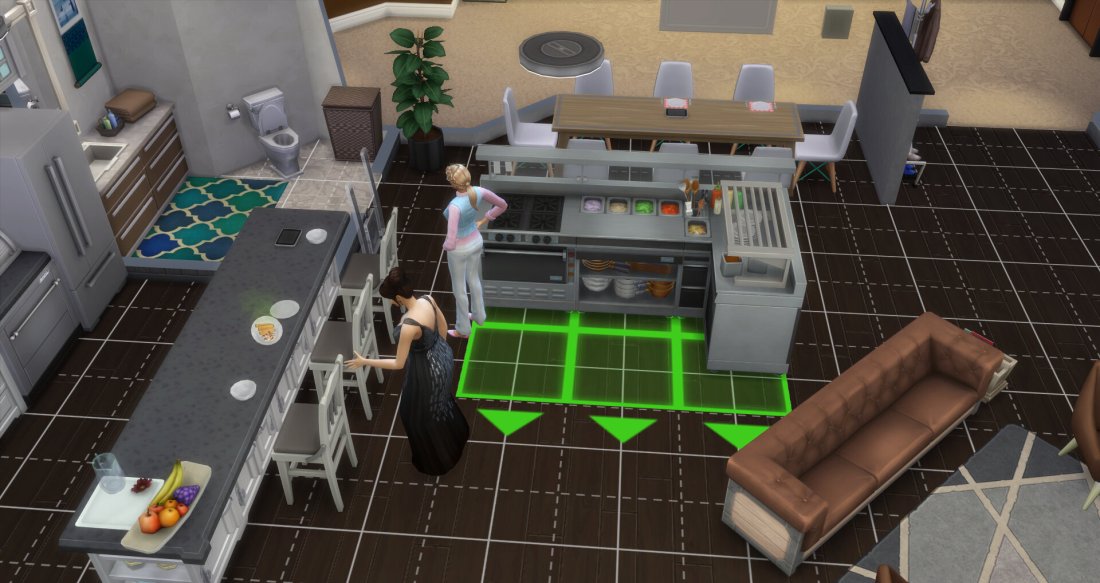 Look at this thing.  It’s gigantic!  I was thinking it might be fun to put it into one of my houses and have a sim learn some of the experimental foods though… just not this one. 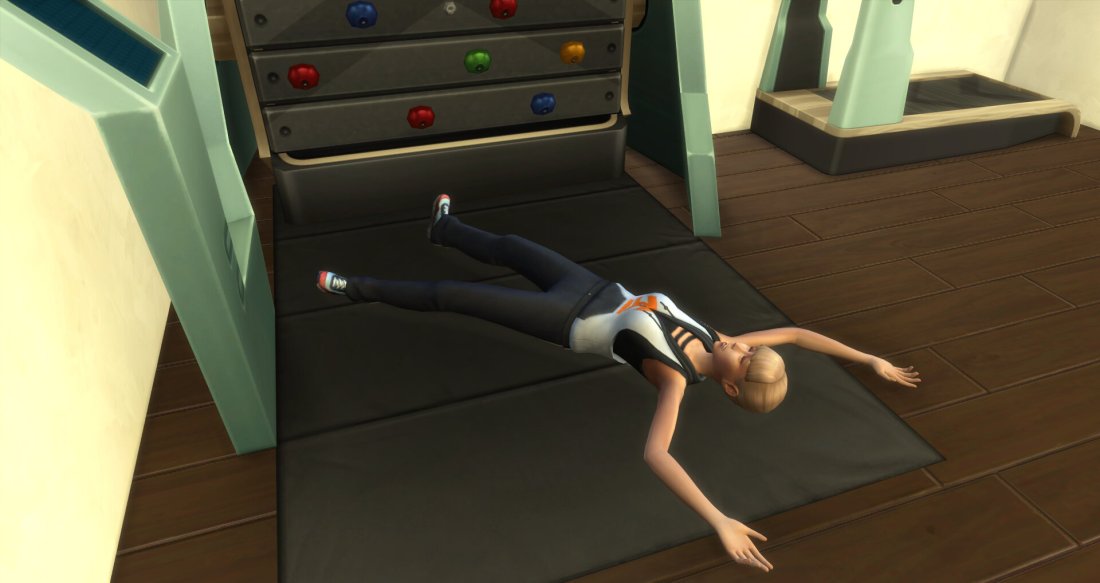 Brin fell off of the rock wall.  Hilarious.

As per usual, the kids come home from school and just stand on the street until I tell them to go home and do something. 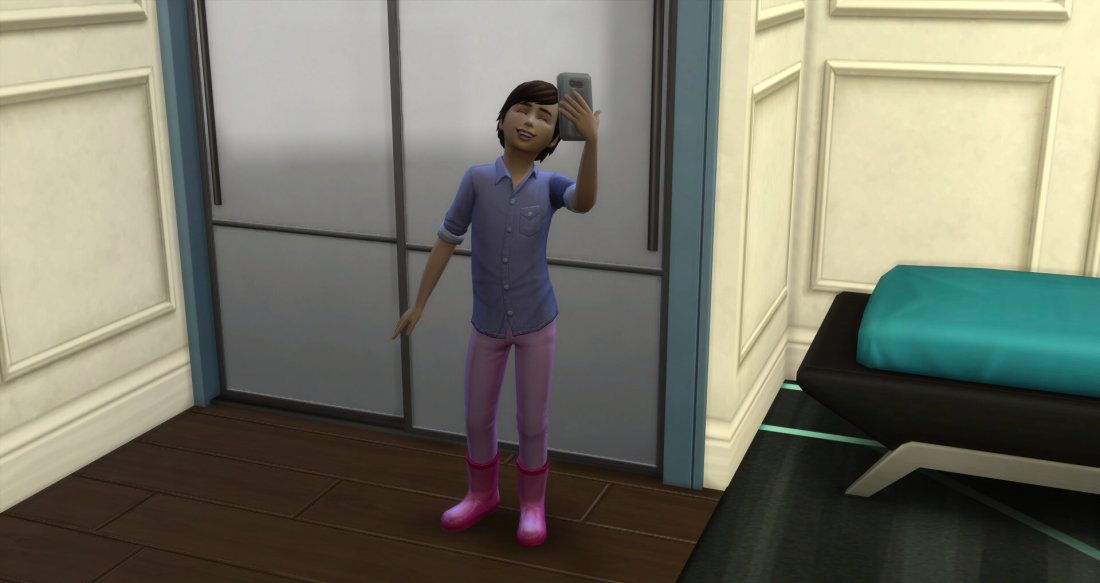 Quinten wanted to try on outfits in the closet.  Maybe he’s not happy with his patented green clothes?

Jackie and Kaeden chatted for quite awhile.  I’m glad she gets along with the kids autonomously even if she does get whims like this: 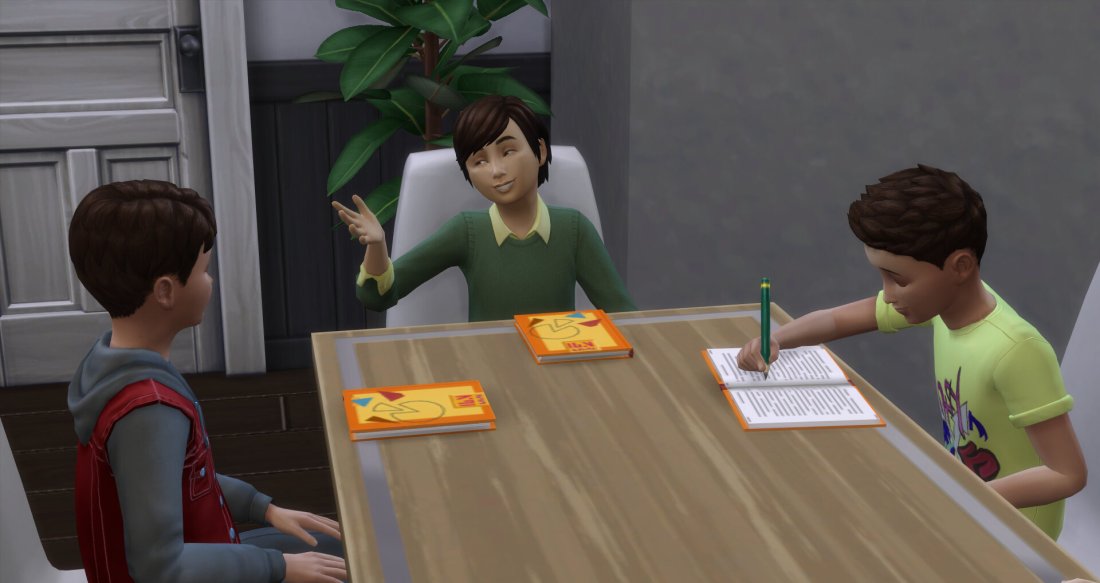 Once they’d knocked out some whims they all wanted to do homework.

Curtis came home from work filthy.  His hygiene bar was full red!  He still had time to chat with Jackie before his shower.  She’d had a whim to talk to him all darned day!