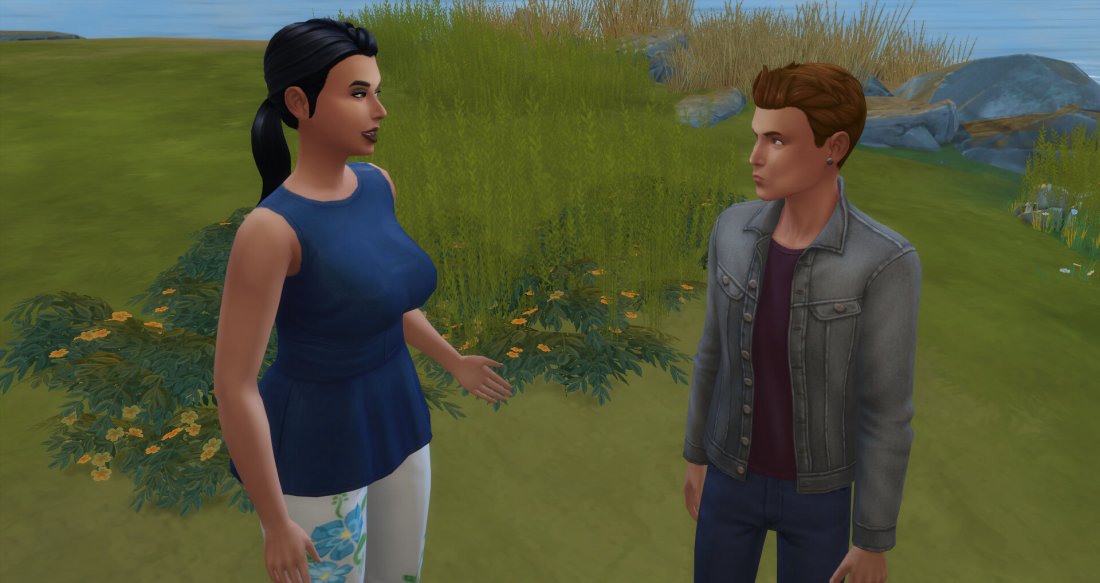 This chapter is going to be a little longer than usual.  It was either that or have two super short chapters.  We finally get to one of the couples that had an arranged marriage.  Once they were all married I bumped their romance bar back down.  I wish we had something like the hacked wedding arch in Sims 2.  With that you could get married with no romance.  If I cheat them married either via CAS or MCCC they end up with like 75/100! 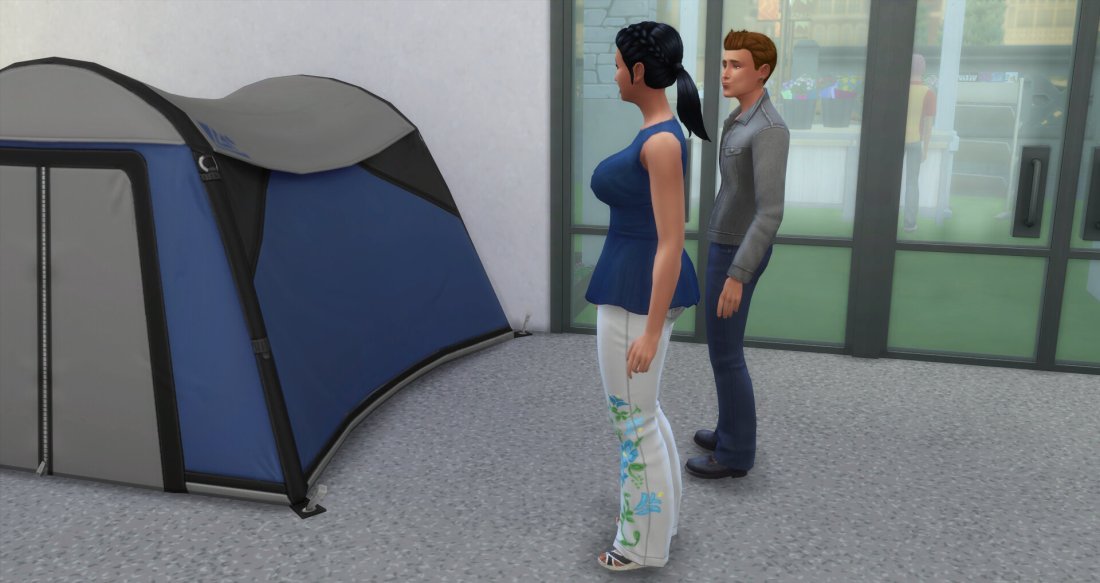 Their first stop is Super Super Mart to purchase a tent.  They also purchased a cooler but never used it.

I forgot Marco worked there!  That really doesn’t look like working though.  I think he’s practicing his moves for the next time he performs at the lounge.

Ugh.  It seems that Ashley tried flirting with Kurtis.  He freaked out and they both got embarrassed. 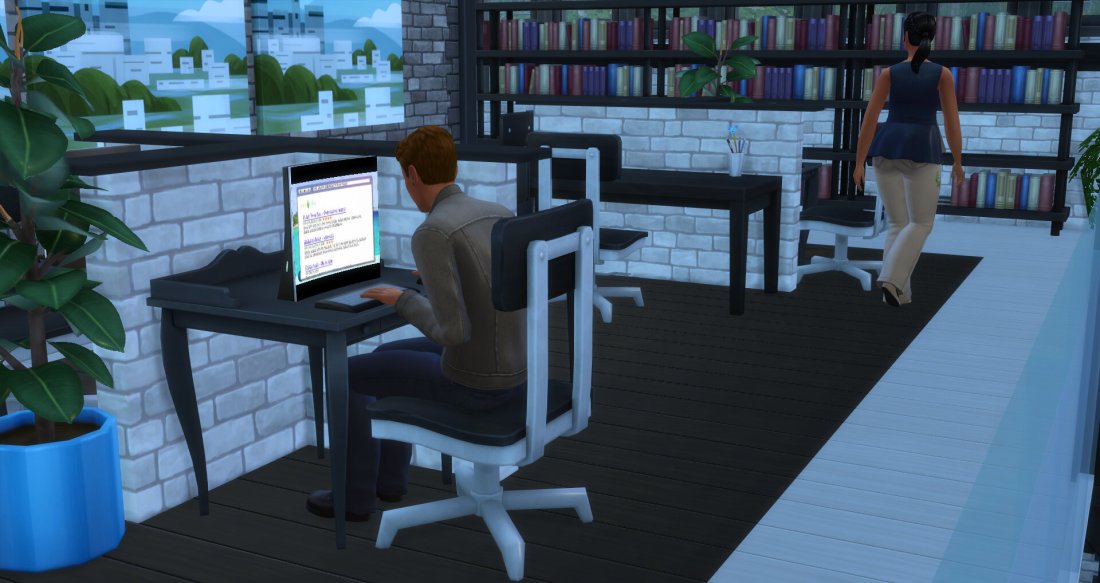 Then after I gave them the loan needed to purchase their gym so that Ashley can go into the athletic career they headed to the library to buy it.  Kurtis had rolled Secret Agent.  There’s no way he’ll be able to get into that career anytime soon if ever so I figured they’d just buy a gym and he can hang out there. 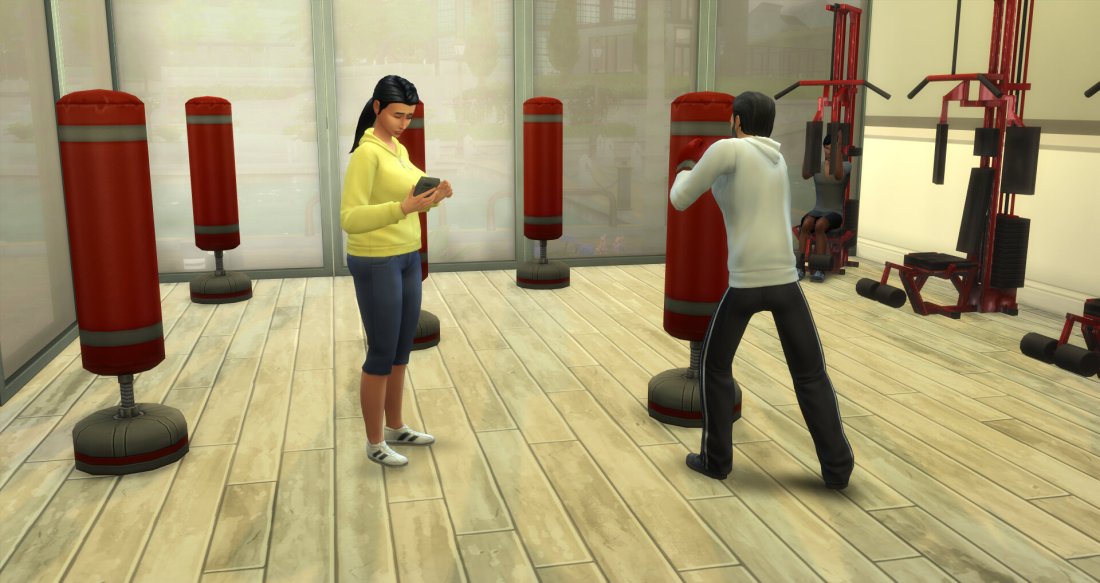 They arrive at the gym and a still embarrassed Ashley takes a job in her chosen career. 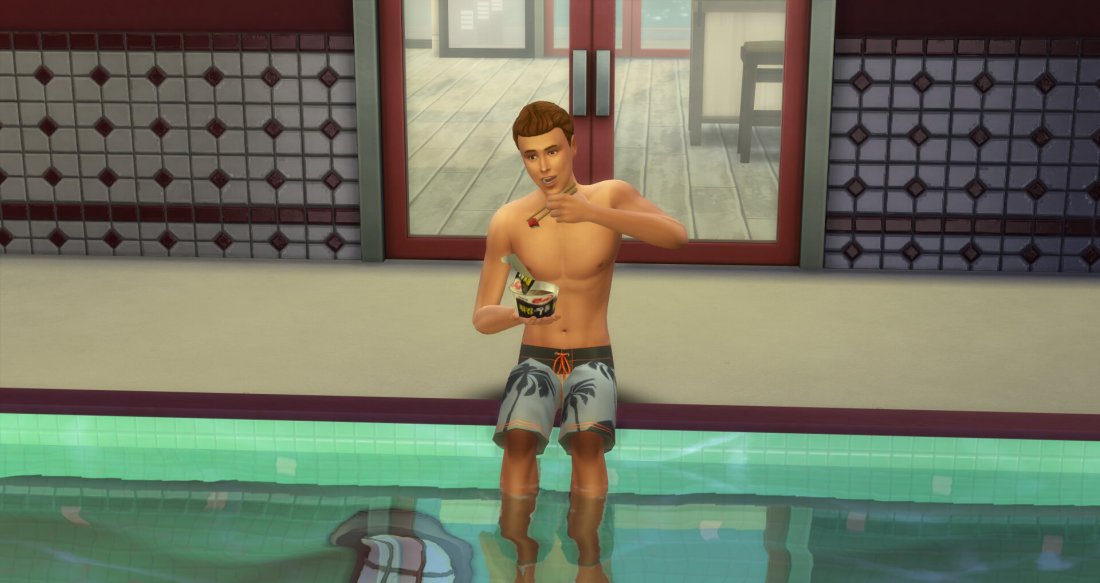 I’m sooo happy that the vending machine has a custom snack!  It’s ramen noodles and if it wasn’t for that he would have been eating food from the cooler.  Just like his brother Tevin Kurtis is a vegetarian.  I feel like a hypocrite because I’m a vegetarian myself but really it’s quite annoying with sims!  The only other food option from the machine is a BLT sandwich.

All of my sims are going to be sooo fit!

Kurtis needs to do friendly introductions for his Party Animal aspiration but unfortunately, he either knows them already or starts talking to them before I can tell him to!  The guy is the husband of our resident good vampire.  He’s human and I haven’t decided if she should turn him or not.

I don’t know why the TV is so dark in this pic.  I was trying to show that she was working out while gaining some cooking skills.  One of my favorite multitasking things in this game.

They get $20 every time someone uses the rock walls.  I think these things are so cool!  I love watching sims climb on them.

Ashley had barely worked out when she got muscle fatigue.  I searched online to see if there was something I could do and found that the soothing muscle soak or something like that does the job in addition to giving them a 8 hour energized moodlet.  So I moved some stuff around and bought a tub.  Now, this is a gym, not a wellness center so I didn’t think that the ways to make money from a wellness center applied.  I was shocked to find that sims would use the tub for soaks and mudbaths and they made money off of it!

I have to admit, I spent most of the time just watching the sims.

These two seem to be getting along a little better.  He’s even giving her a little side-eye there.

Not many sims use the vending machine but they do make money off of it when they do.  A lot of them sit in the pool to eat despite the bar right there. 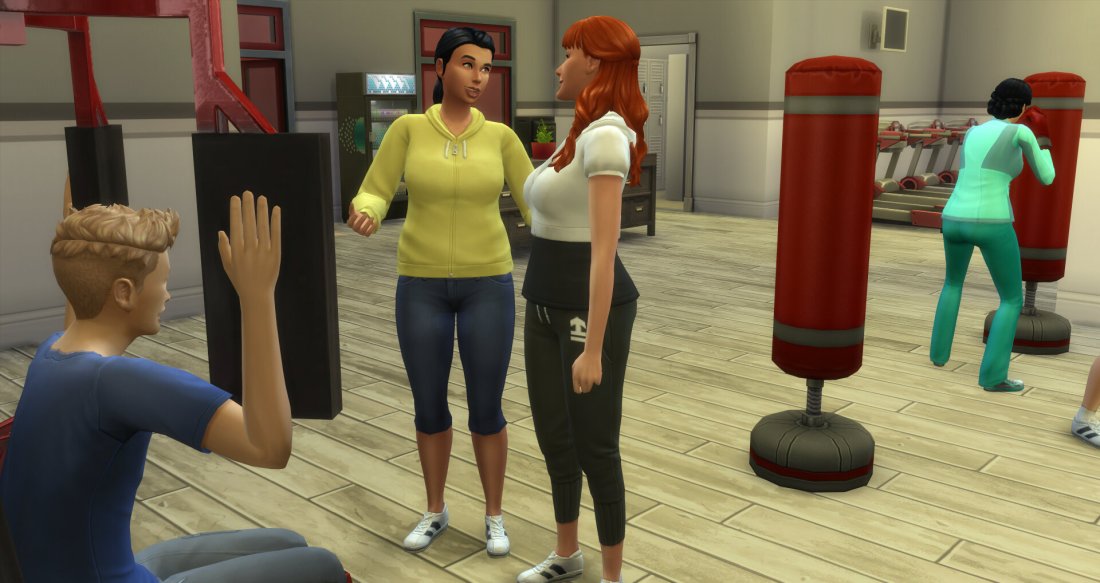 I’m not used to having that more realistic pregnancy mod in and it’s weird knowing that Baylee is pregnant and you can’t really tell unless she has her bathing suit on. 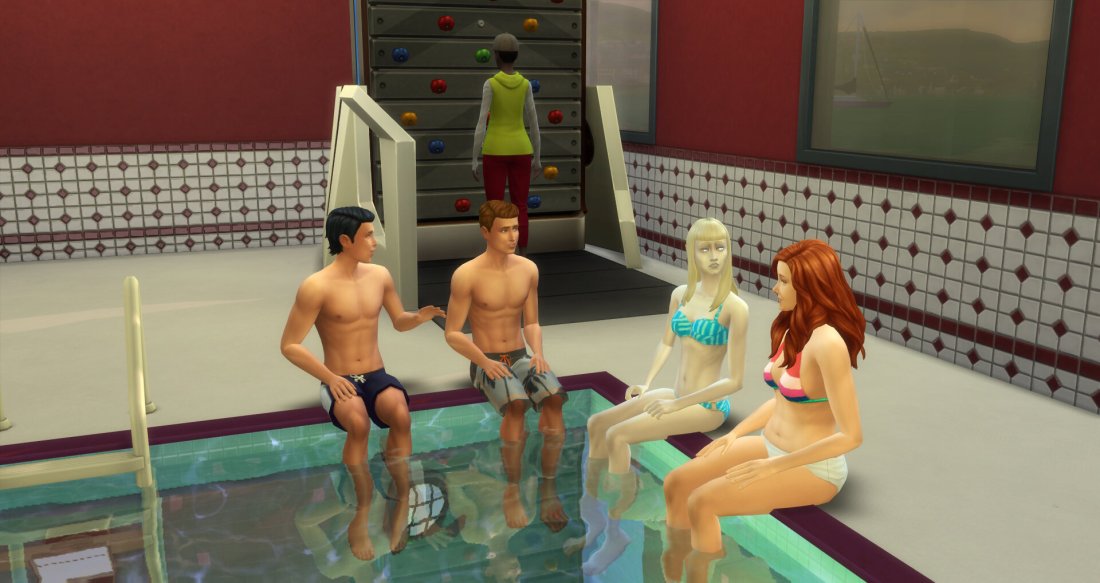 Speaking of bathing suits.  Notice how miserable Missy looks?  She’s been there all darned day!  Just like at the lounge.  I ended up using my mod to make her leave.

I figured there’s no point in them going home.  There’s room for their tent and if someone shows up they can make money from the entrance fees while they sleep.  It seems there’s only a short time period that nobody goes to the gym.  It’s like 2am-6am. 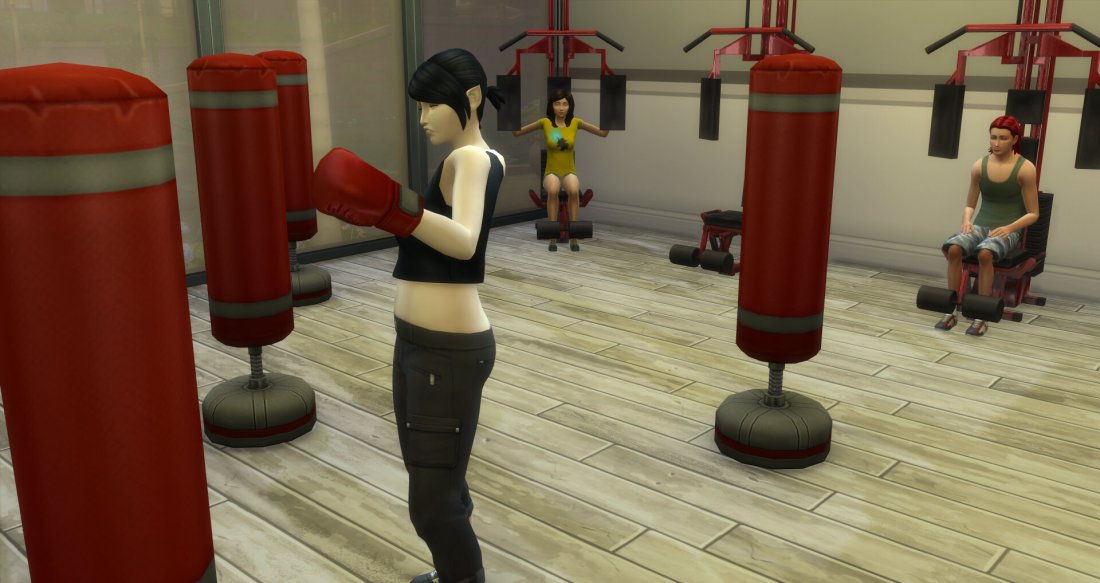 In the wee hours of the morning some of the Maledire’s head out to work out.  It’s so funny because they rarely ever work out at home! 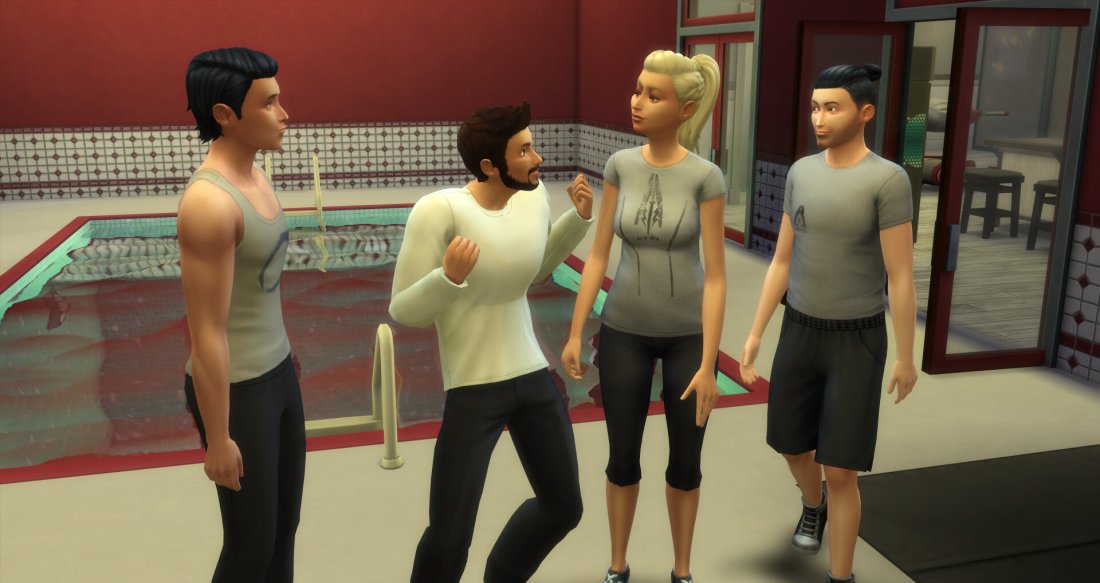 Some of the barracks residents were there working out (grey shirts) it seems they are trying to get ahead on their next promotion.

Kurtis and Ashley work out a lot!  Like practically non-stop.  Hopefully, soon they’ll max their fitness skill and can mentor sims.  I think they might be able to make money doing that but I’m not entirely sure so I’m interested to see if they can. 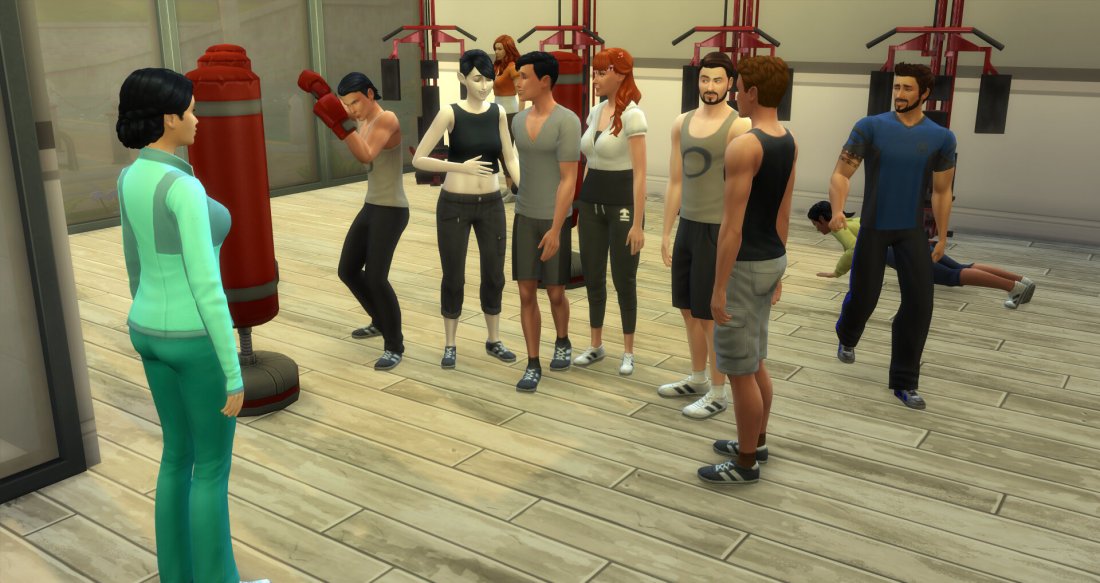 It’s weird the gym will fill up and there will be tons of sims and then they’ll start leaving and hardly any will be there.  It’s sooo fun watching all of them interact though!  I wish I’d thought of doing this ages ago.

Kurtis started running with Ashley so they could chat and darned Liza had to get in on their conversation.

That’s better.  Their friendship was finally getting pretty high.

I noticed that Ashley had a bunch of wellness conversation options.  I hadn’t realized she has level 8 wellness!  So they purchased some yoga mats which are extremely popular.  I’m thinking this gym will expand pretty quickly. 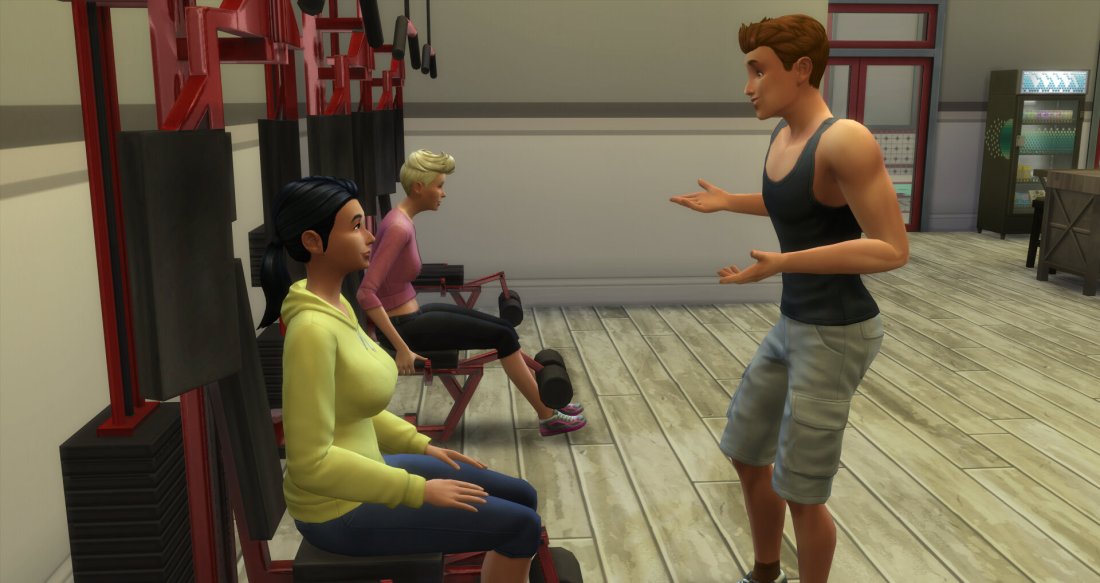 They both had a whim to kiss the other and I thought the gym surrounded by stinky sims is not the place for romance so Kurtis asked Ashley on a date. 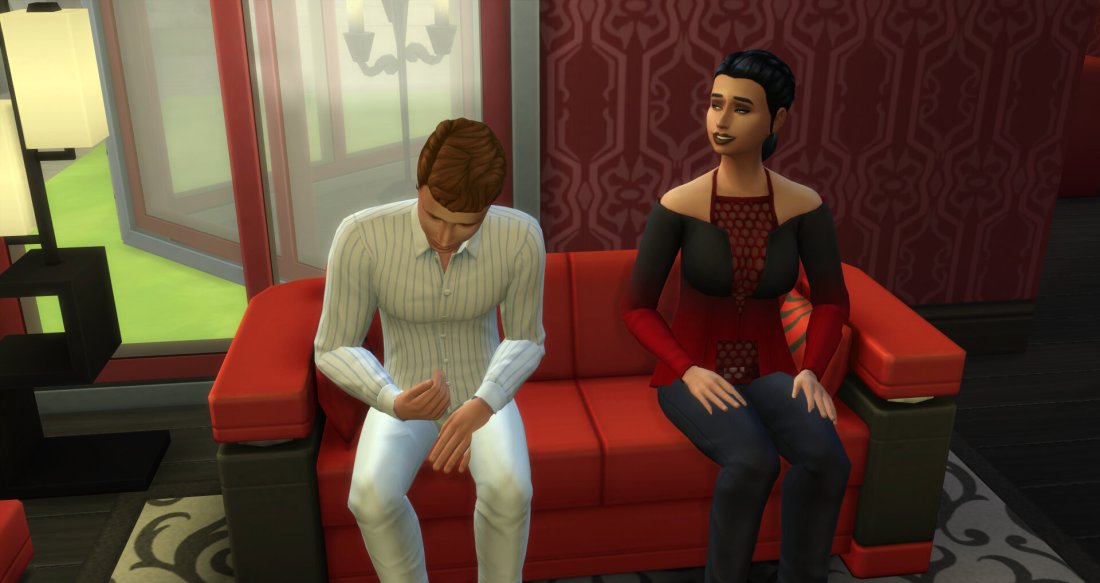 The lounge is literally the only place they could go.  A date at the library might sound fun to bookworms like myself but I don’t think they’d enjoy it much.  Kurtis seems nervous but Ashley seems pretty confident.

She decided to have a drink so he followed her to the bar and finally got up the nerve to flirt. 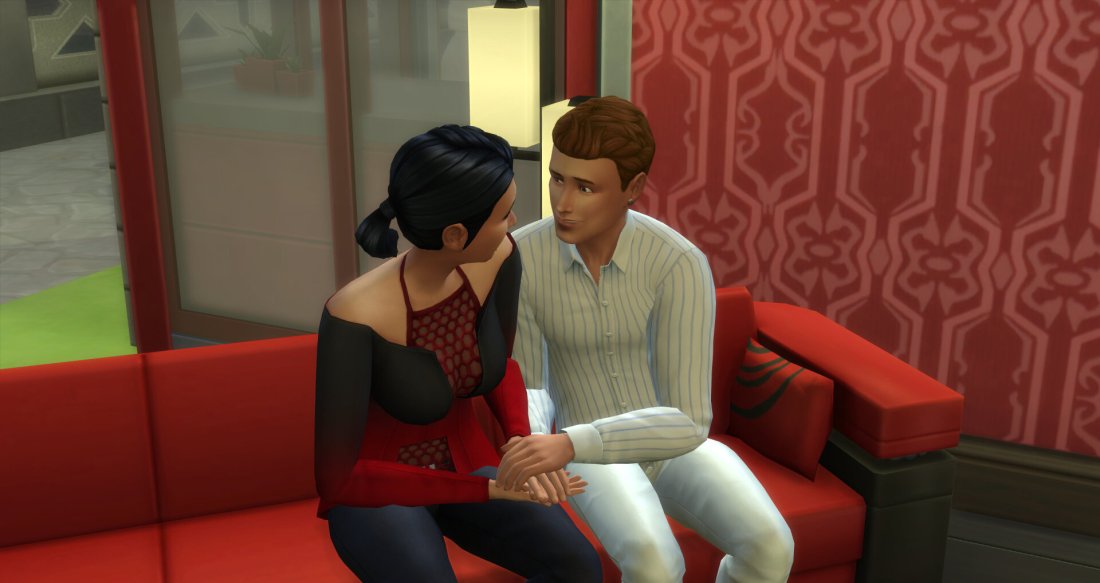 Then some other sims started sitting next to them and they moved into one of the niches for privacy.  Kurtis is not into public displays of affection.  I was actually surprised he wasn’t affected by being in the lounge but I guess as long as nobody’s near them he’s okay.

They ended their date with a little bar food.  Thomas the train conductor seems to be pleased to see the youngsters enjoying themselves.

They were both absolutely exhausted when they got back to the gym so they dragged themselves into the tent and slept.  Meanwhile, I watched the sims who came in after 6am.  I really miss playing Liberty and her hubby Jace. 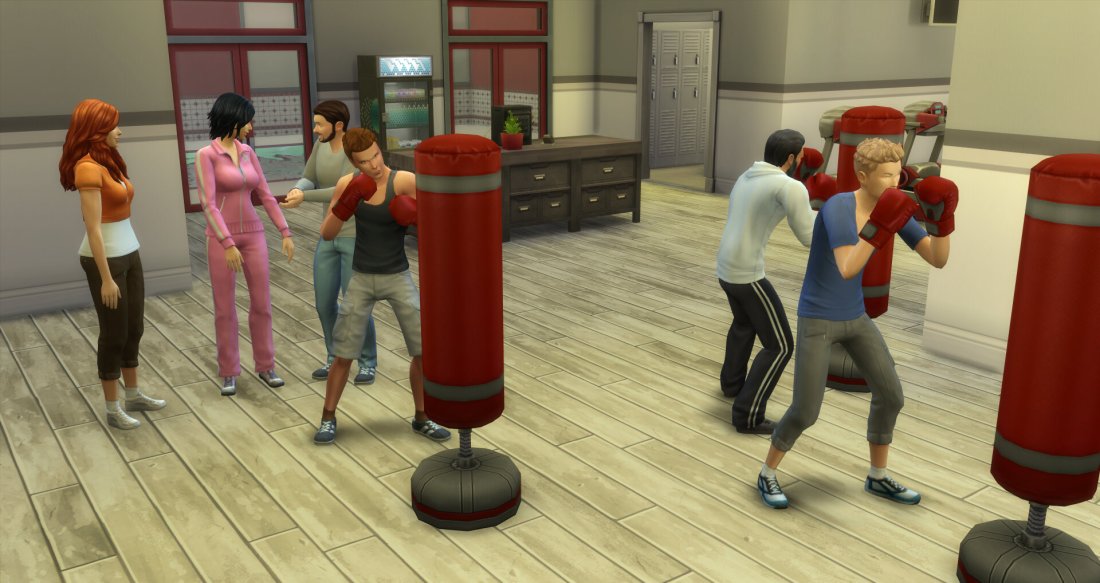 Back to working out.  I think by this point Ashley had already left for her first day of her Athlete career.  It almost seems like a waste putting them into a career when they make so much more money and it’s so much more fun having them here.  I noticed Duke chatting with Isis Ikeda.  Maybe if I don’t end up rolling for them to marry any of my sims I’ll hook them up.  We’ll see. 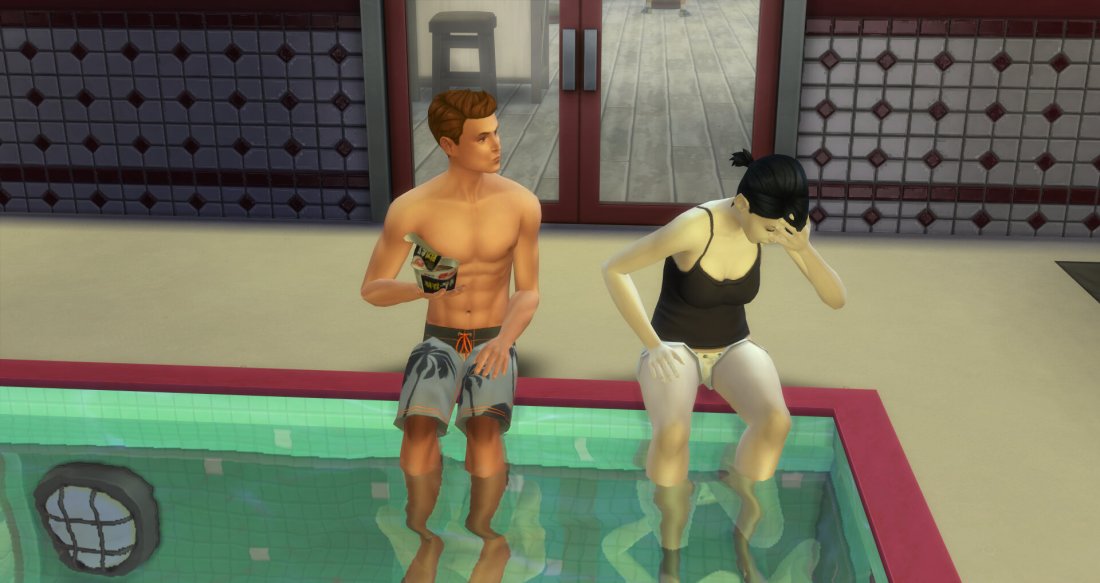 Kumiko was sitting there all embarrassed when Kurtis sat to eat his ramen.  He asked her about her embarrassed mood hoping it would make her feel better but it seemed to make it worse.  Also, that tile color in the pool looks terrible.  I ended up changing the color scheme out there to go with the rest of the place and didn’t realize I hadn’t changed the pool interior. 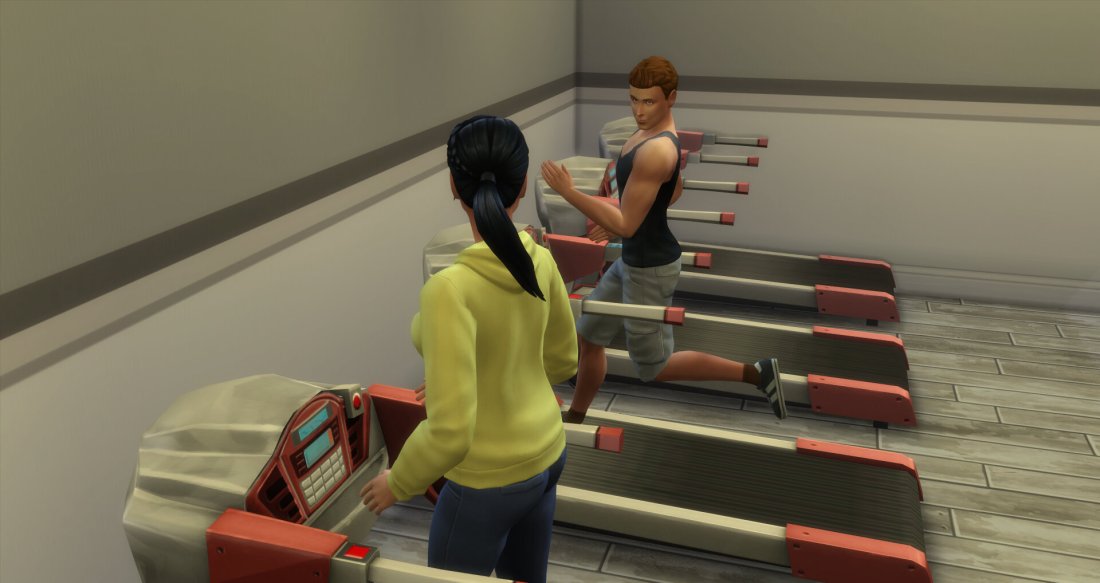 Ashley returns from work with a promotion on her first day!  Kurtis runs with her and they chat about their day.  Look how fit both of them are now that they’re constantly working out!  I think I need to give them more than one work out outfit. 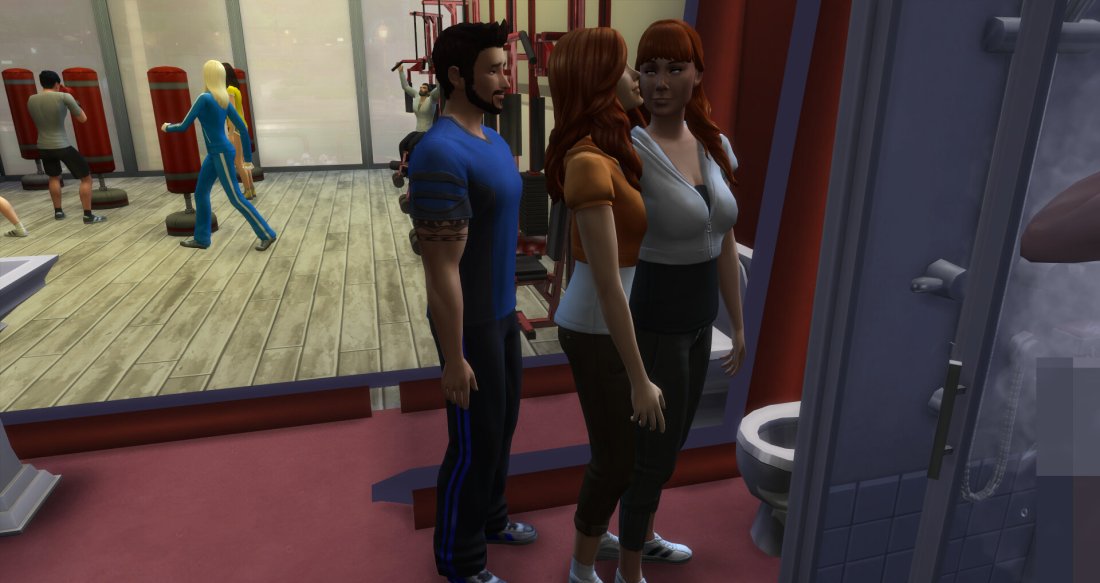 Really though? It’s a 1×2 toilet stall and you’re trying to fit in there to chat???  I was dying to post this to Twitter but… spoilers.  So sad. 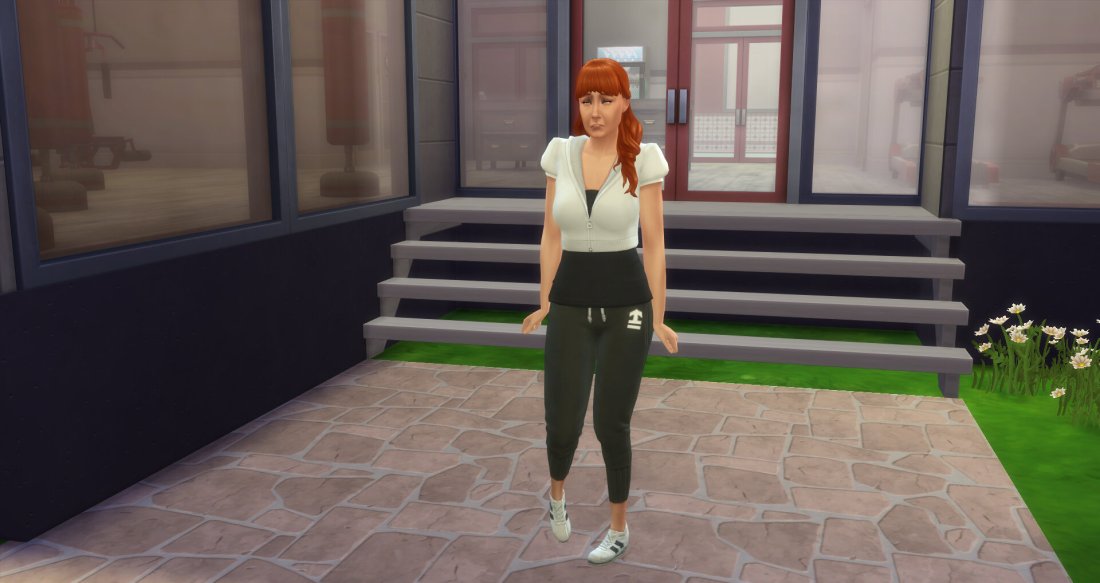 Ohmygosh why didn’t you go to the bathroom when you were in there?  Why aren’t they using the toilets?  I never figured it out.  Like the confusion over the mixologists in the lounge, this mystery baffles me.  They all waddle around with toilet thought bubbles but they don’t use them and then finally they leave. 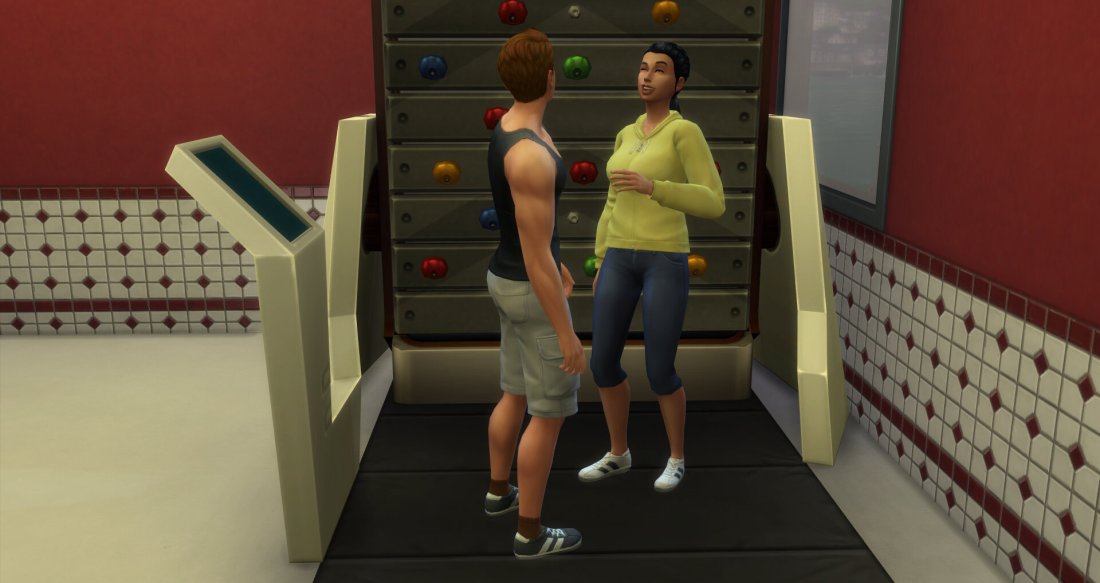 Everyone’s left for the night and since they were too tired the night before Kurtis proposes a little tent woohoo.

Fingers crossed risky woohoo didn’t strike again.  They don’t have a house and they still owe like $30,000 on their loan for the gym. Plus, I want to expand the gym and hold off on the house.  But I thought they should celebrate.  I really wasn’t very optimistic that they’d make it as a couple.  I thought for sure that they would just kinda live together.  I’m really thrilled how things worked out with them!

I gave the household Ashley’s last name instead of Kurtis’s because having two Blackburn households would have been confusing. I’m not sure how I’m going to do it with families like the Robinson’s that have more than one kid that will move out.  Maybe Ace and Nico will take their partner’s last name too.  No clue.  I realized while writing this that I never took a pic of the exterior.  Maybe I’ll do a post with tours of the new buildings.  So far, the gym was the most profitable which surprised me.